In 2001, Bungie Software and Microsoft teamed up to create the next generation of first person shooters, which was destined to become a literal game-changer, Halo: Combat Evolved. 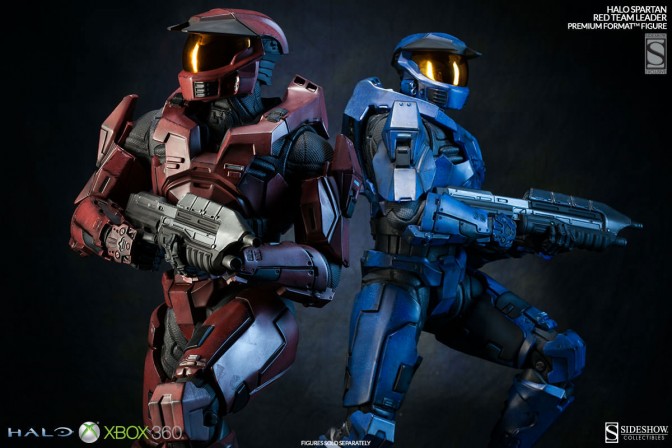 Introducing players to the mysterious lone super soldier Master Chief, and an epic quest to save humanity from alien invaders, Halo set new benchmarks for storytelling and multiplayer gameplay, surpassing all other console games of its generation with record-breaking success.

Backed by a legion of followers known as Halo Nation, the universe and culture rapidly expanded beyond the games in books, comics, and other media, including the famous web parody show Red vs. Blue created by Rooster Teeth Productions.

Named for the default teams in multiplayer mode, and using footage captured in-game of characters acting out scripts, the wildly imaginative RvB captures the unprecedented humor and spirit of the Halo community. Today, with multiple sequels and 343 Industries forging the future of the series, Halo continues to thrive as one of most important and successful franchises in gaming history.

Sideshow Collectibles is proud to celebrate more than a decade of Halo with the officially licensed Halo Spartan – Blue and Red Team Leader Premium Format™ Figures.

Standing over two feet tall, these limited edition statues perfectly capture every detail of the Spartan warriors in Mark V UNSC armored combat suits with metallic visor with mirror finish. Ready to go PvP, Red and Blue are armed with choice Covenant and UNSC weapons, including a swap out standard issue Assault Rifle with 32 rounds and a fully charged Needler.

Hand-crafted with unmatched artistry and attention to detail, the Halo Spartan – Blue and Red Team Leader Premium Format™ Figures are the ultimate tribute for fans of Halo’s competitive multiplayer phenomena!

The Halo Spartan – Blue and Red Team Leader Premium Format™ Figures will have a limited edition size of just 100 pieces produced for each, and are sold separately. They are priced at $399.99 with payment plan options available. Party up!