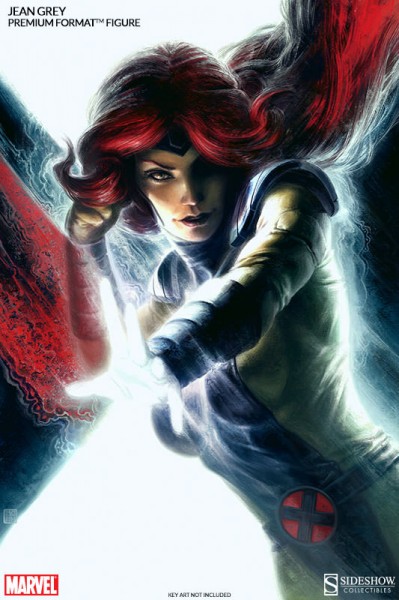 “I’ve been interested in more graphic approaches to my work for a while now, and in this case an X-themed composition seemed like an obvious choice. It’s not exactly subtle, but given the nature of the subject matter I felt like it would really complement the final sculpted piece from Sideshow.

In terms of the color scheme, I intentionally kept it rather limited, letting the light dominate over the colors for the most part. In some of the early versions I explored a more extreme palette, where the image was partially doused in red, as if the viewer were to actually experience being at the receiving end of Jean’s attack. It was an attempt to emphasize a visual break, but ultimately we felt it took too much attention away from her face.

In general, I wanted to strike a balance between something energetic and beautiful. Jean always struck me as a kind of sovereign character, but not unhinged (usually!) Chances are she is more powerful than you and she knows it – that’s the impression I wanted to create.”

Fabian Schlaga was born in 1987 and, thanks to his father’s job, has spent most of his life moving from one country to another. His parents always considered themselves culturally educated people and as such there was no room for these so-called “superheroes” or whatever. So naturally, that’s exactly what got Fabian’s attention. Nowadays, whenever he’s not drawing atrocious monsters and/or busty ladies, he spends his time day dreaming about what he’d do if he were Akira.

Sideshow's Dinosauria lives on with a fresh look at ancient history