What’s the internal temperature of a tauntaun? Luke warm!

Following the exciting release of our Imperial Probe Droid Sixth Scale Figure, Sideshow is proud to introduce, to Star Wars Collectible fans, the next two highly-anticipated heroes from the opening scenes of Star Wars The Empire Strikes Back!

With the Empire hot on their heels, the Rebel Alliance has taken refuge in a secret location at Echo Base. Get ready to recreate your favorite moments leading up to the Battle of Hoth with the Commander Luke Skywalker and Tauntaun Deluxe Sixth Scale Figures! 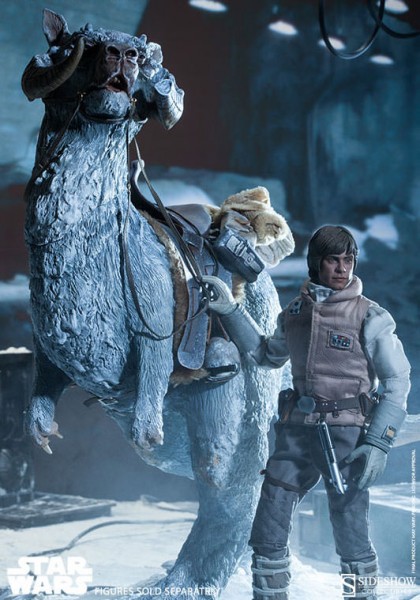 Fearless and vigilant, we’ve brought the Rebel leader to life with an astounding, screen-accurate portrait of the young Skywalker as portrayed by actor Mark Hamill.

Bundled up in authentically replicated Rebel cold-weather fatigues, featuring hand-tailored insulated clothing and an additional portrait with headgear and snow goggles, Luke is prepared to head out into the freezing wilderness surrounding Echo Base armed with his trusty lightsaber, blaster, and macrobinoculars.

There’s no telling what dangers he will encounter while on patrol…from a nearby ‘meteorite’ crash, to hungry wampas, to a full blown Imperial invasion – the Commander of the Rebel Alliance had better be ready for anything!

There’s a famous urban legend that claims Luke’s encounter with the ferocious Wampa in The Empire Strikes Back was written into the script in order to obscure severe facial injuries Mark Hamill had recently suffered from a car accident.

However, while it’s true that Hamill was involved in an accident before production began, George Lucas debunked this myth in behind the scenes DVD commentary, stating that the scene had been planned from the very beginning!

Expand your diorama building opportunities with the Sideshow Exclusive edition, in which we’re proud to include an additional swap out ‘wampa-attack’ portrait!

The regular and Exclusive versions of the Commander Luke Skywalker Sixth Scale Figure are priced at $199.99, with payment plan options available for as low as $66.66/mo.

“I thought they smelled bad…on the outside!”

Though stubborn and smelly creatures, it’s been proven that nothing beats a tauntaun for fast, reliable transportation in Hoth’s sub-zero climate.

Sure-footed and ready to ride across the frozen wastelands, the intricately detailed tauntaun comes equipped with hand-crafted fabric harness, saddle, and survival gear. Interchangeable expressions bring out the distinct personality of the snow-lizard, and two sets of horns allow collectors to identify which Rebel soldier she belongs to.

Displayed on a museum-quality sculpted Hoth tundra environment base, the Tauntaun Deluxe Sixth Scale Figure is an essential addition for recreating your favorite scenes with Luke Skywalker and Han Solo on Hoth!

The Tauntaun Deluxe Sixth Scale Figure is priced at $349.99, with payment plan options available for as low as $45.00/mo.

We know what you’re thinking and don’t worry, there’s no way we’ll let Han Solo’s tauntaun freeze before he makes it past the first marker! Keep an eye out for the scruffy nerfherder, he’ll be coming soon to complete the set!

Featured Collector: Will B.

Did you know: Spider-Man