Playing on Discovery Channel’s famous Shark Week, Marvel has officially declared this week Stark Week. So here we are in our nerd blog – the only place deeper and darker than the grand chasms of the ocean – poised to discuss those times when comics transcend awesome and breach that hallowed, laughable territory we lovingly refer to as “jumping the shark.” Here’s a look back at four instances when Tony Stark, the Invincible Iron Man himself, eschewed nuance and went straight for the jugular.

This storyline, which spanned issues 149-150 of Iron Man, is a fan favorite. It’s got everything. Iron Man, Doctor Doom, Camelot, time travel… Iron Man. What’s not to love about two energy blasting dynamos being hurled back in time to deal with King Arthur and knights and wool pants? The geek in us goes on overload. Superheroes AND medieval times?! It’s like combining pop tarts with Cool Whip, or sex with someone you don’t loathe.

But as much as we love it, time travel is inherently exasperating. Sure, I’ll accept the guy in a metal suit shooting pew pews out of his palms at a burnt up dude who is so ashamed to be seen, he does everything he can to be visible and known by everyone in the universe. But whiz them back in time to Camelot? No matter how well crafted the plot is, from that point on you’re really straining on the suspension of disbelief.

Doomquest is fun and John Romita Jr’s art is as ever a salacious treat, but see that underneath your feet David Michelinie? That there’s a shark. 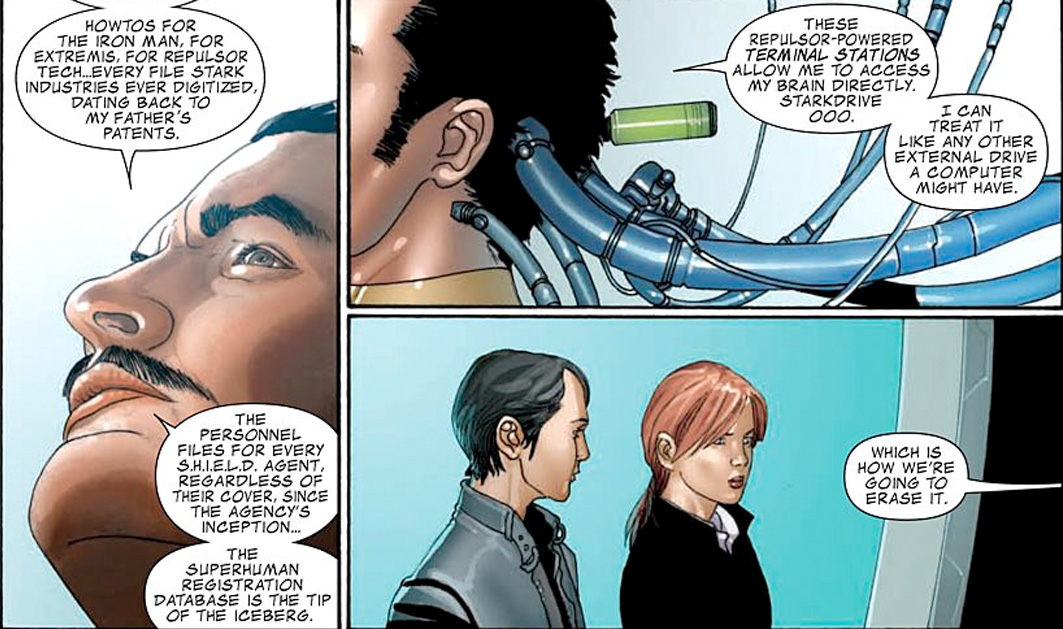 Our next Iron Man romp comes to us from Matt Fraction in the Invincible Iron Man series, issues 8-19. Here Norman Osborn has taken control of H.A.M.M.E.R. and demands the personnel files gathered under Stark’s ill-fated Superhero Registration Act for nefarious purposes. Tony deletes the files from the H.A.M.M.E.R. computers, but they are still in his brain because Extremis something something. Osborn wants to turn Stark’s noggin into a USB flash drive and here we arrive at the moment where Tony lifts off out of the ocean, on his way over a poor figurative shark: Tony determines the only way to prevent Osborn from gaining the sensitive information he seeks is by CTRL+ALT+Deleting his mind. Yup, Tony Stark must go brain dead to save the world.

This arc has many memorable and well-loved moments. Pepper Potts takes over Stark Industries and gets her own suit of armor. Meanwhile Osborn dons the Iron Patriot suit and gets to kick the snot out of Stark on national television. Everything concerning Osborn, Potts and Maria Hill (who plays a key role in the story) is classic fun Fraction, but rendering Tony Stark a drooling zombie seems excessively bizarre. If Tom Wilkinson and Elijah Wood can manage to wipe specific memories from people’s brains in Eternal Sunshine On The Spotless mind, then certainly playboy genius billionaire Tony Stark can figure out how to forget some names without turning himself into Tila Tequila’s mental peer? 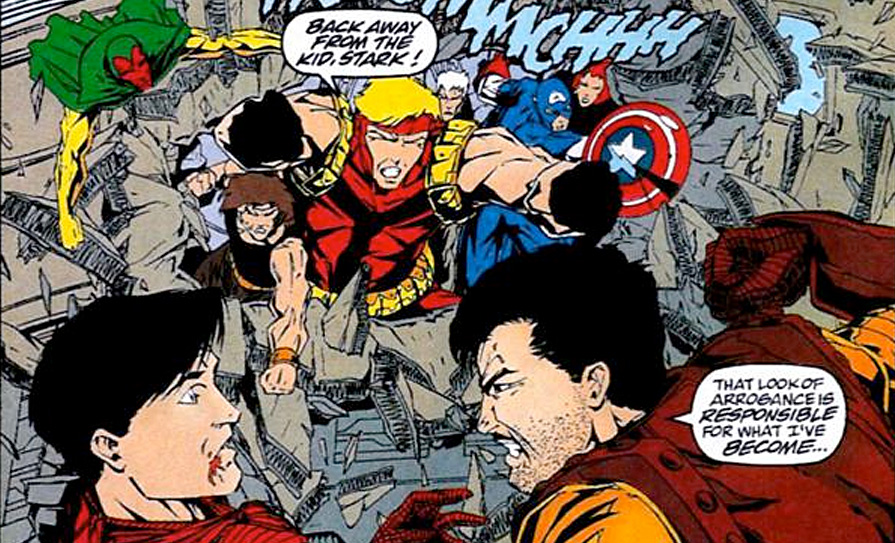 Another time travel story. This arc centers around Kang the Conqueror, who, coincidentally is the only character in the Marvel universe allowed to time travel because otherwise, he’s nothing more than a weirdo who’s spent so long in the same latex suit that his face has turned blue. Oddly enough, the one guy we’ll accept hurtling through time isn’t the one who does it in this story. It all starts when Kang reveals that Tony Stark has been his secret agent all along. How all along? Since always that how! Sorry 35 years of character development, you’ve had your fun.

The plot line could have ended here, with the Avengers taking out Stark after he kills a couple of folks. But instead, the Avengers sail right over those sharks by traveling back in time to convince a teenage Tony Stark to come back to the future and dethrone the Kang-puppet Tony. It is almost reminiscent of the great scene in Days of Future Past where old Professor X talks to young Professor X and convinces him that hope is worth having, except that seeing Tony Stark replaced with a brattier teenager version of himself is a little much to handle. There is only one kind of person who prefers teenagers over real humans and that person has seen every Wes Anderson film twelve times, so we aren’t going to listen to them. Fortunately, the magic of retcon eventually sorted that one out.

When Joe Quesada wrote issues 26-30 of Iron Man volume 3, he gave Tony Stark’s armor a mind of its own. As with nearly every A.I. story he had two directions to go – Terminator/Ultron homicidal maniac or the compassionate-wants-to-like-us-but-doesn’t-understand-itself approach. Walking the line between masterful tragedy and the absurd, he landed somewhere in between deciding that if Iron Man’s armor gains sentience, it would fall in unrequited love with Tony Stark.

Look, many stories have been written about humans and robots establishing feelings for one another and it is almost always controversial. This is probably due to it being axiomatic that intelligence and love are mutually exclusive terms. If seeing Stark put on an older Iron Man suit to fight the sentient suit, only to have the latter fly off the handle in a jealous rage and tear the armor off Tony like a crazed, hormonal teenager ripping the petals off a daisy doesn’t strike you as a bit over the top, nothing will. Luckily we also have a gnarly case of unrequited love for Iron Man. A jumped shark can still be a thoroughly enjoyed shark.

There are plenty more shark-jumping moments in Iron Man’s storied and sometimes confusing history. Heck, we recently read in The Secret Origin of Tony Stark storyline spanning issues 9-17 of the current Iron Man series as Tony’s father, Howard Stark, went on a covert Ocean’s 11 inspired mission in Las Vegas, replete with baby swapping, aliens posing as casino owners and robots genetically modifying a child to pilot a suit of armor the size of Galactus. Perhaps that should have made the list. Nah… nothing to see there but normal comic fun.