Captain America has had a variety of shields throughout the years, each with different strengths as well as metallic constructions. While the Super Soldier Serum made him strong and capable, Cap’s shield is one of the most iconic parts of the title. And the most important thing about his weapon of choice is how he chooses to use it.

Captain America‘s restraint and respect in an ever-violent world make him a hero, and moreover, the shield marks his progression over time as a soldier, an Avenger, and a leader. Here are just five of our favorite Captain America shields. Do you think these five are his best? 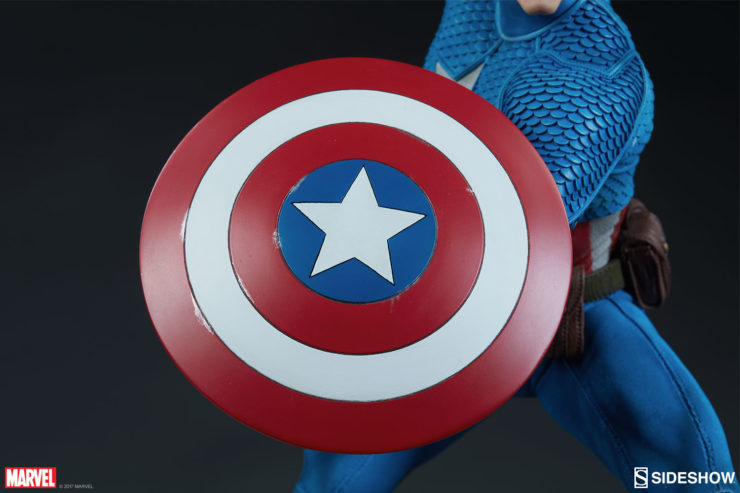 Captain America’s classic shield is known for being made out of Vibranium, the purest and strongest metal that is only found in Wakanda. In fact, in the MCU, for many years, Cap’s shield was thought to be all of the Vibranium on the planet. This hyper-condensed metal material is known for being virtually indestructible. It deflects Wolverine’s Adamantium, Thor’s Uru hammer Mjolnir bounces right off it, and it’s even strong enough to withstand punches from the Hulk.

Most importantly, Captain America uses his intelligence and physical prowess to ricochet his shield off walls and villains alike in a strategic and powerful takedown. It’s impressive that he is so precise, but it also speaks to the weapon’s durability and reliability. 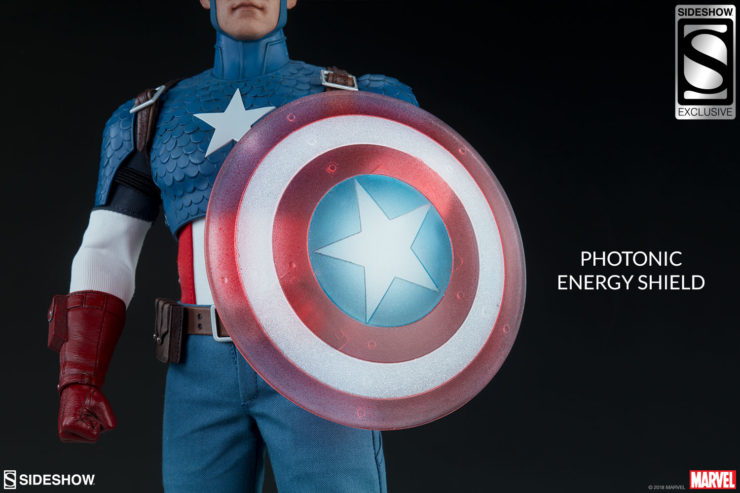 Captain America likes the shield as a default, and is rarely seen without some form of this accessory, even when he was Nomad. However, Captain America loves versatility and utility in a weapon. He’s a practical and adaptive fighter.

The Photon Shield is an energy construct powered by Vibranium, made to be as sturdy as Vibranium and as versatile as the mind of its user. With the shield, Captain America was able to form his shield into the shape of a bo staff, a sword, rope, and more. He could make whatever he wanted. He usually kept it in the form of his old shield, and even used it to ricochet like his original, though maneuvering it is a bit trickier. 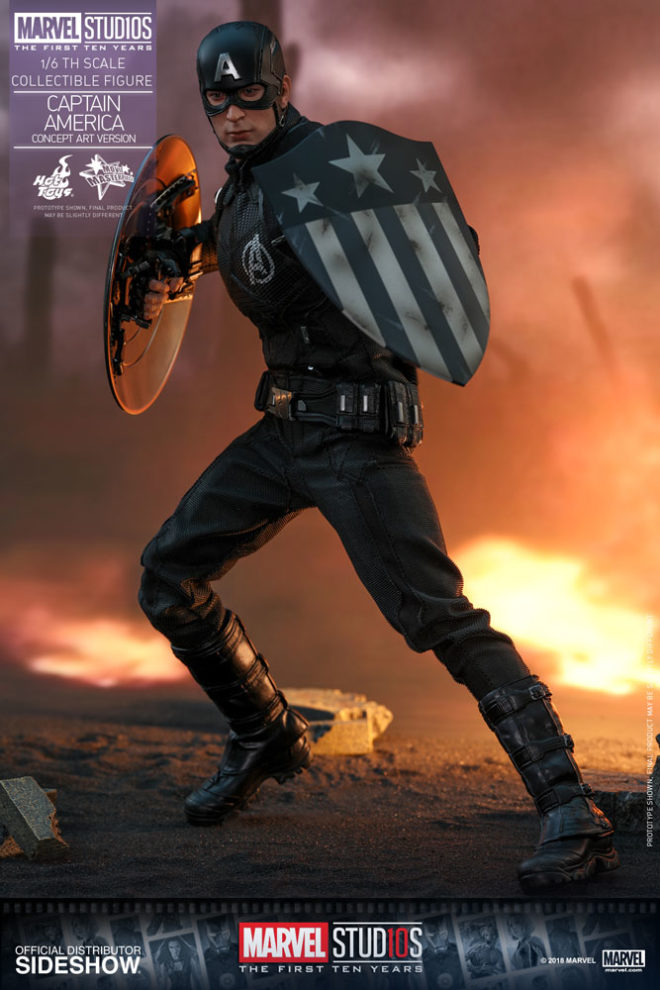 Captain America’s Heater Shield was his original shield and his truly classic design. It features an American flag-like form with stars and stripes. It was the shield originally given to him in World War II. The shield was made from steel and still remained bulletproof, which was a reasonable standard for the time. He was able to charge in the front lines of battle and take down any lesser foes.

This shield followed Captain America into the future, and eventually made its way into his life again. It’s been retooled on many occasions, and even upgraded. It was even in the MCU, upgraded by Tony Stark, despite only being shown in the concept art. The Heater Shield has also been used by the hero Patriot in some comics. 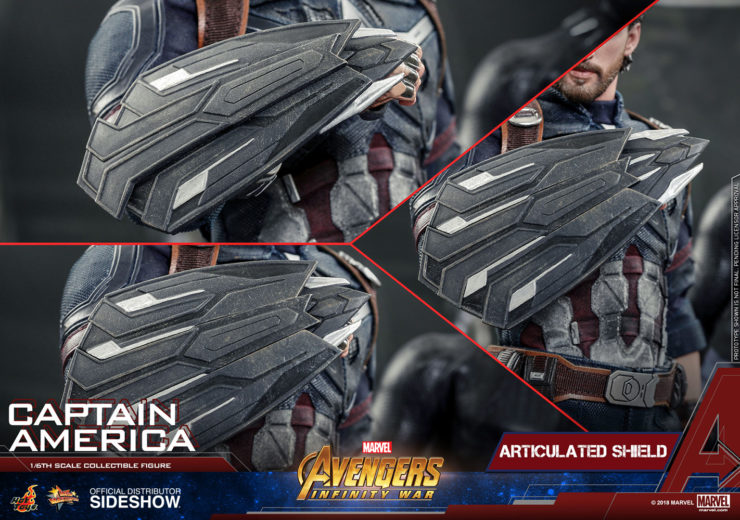 After the MCU’s Civil War, Captain America left his homeland and was taken in by T’Challa, the King of Wakanda and the Black Panther. Not only did he no longer have his traditional circular shield, Iron Man actually broke his original shield.

However, when he arrived in Wakanda, he had no idea that there would be mines and mines full of Vibranium, and Vibranium tech was unlike anything he had ever seen before. Wakandan scientists created a new Vibranium shield for Captain America that shifted form and function in an efficient and exciting way. His Wakandan shield, which can turn into two shield gauntlets, is yet another powerful and versatile tool in Cap’s arsenal. 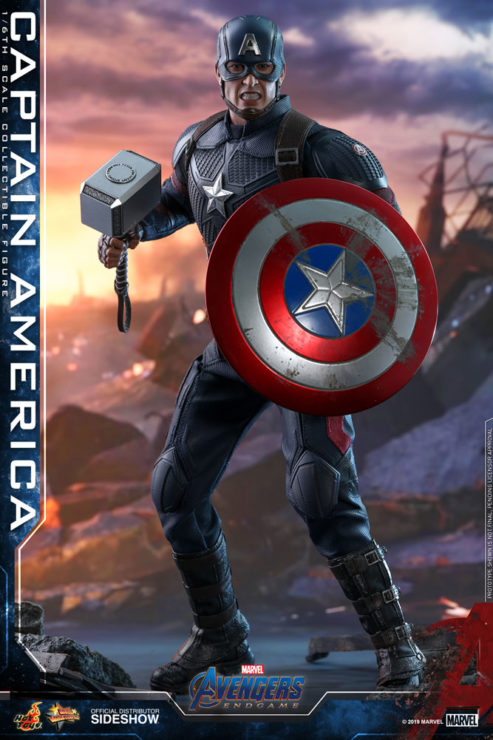 Iron Man and Captain America come back together for one final, epic battle in Avengers: Endgame as they work together to take down the Mad Titan Thanos. After Iron Man figures out time travel, he brings Captain America a brand new and improved shield, made from a Vibranium-steel alloy, as a peace offering.

Captain America uses this shield in his fight against Thanos and, even against the might of the Infinity Stones, the shield holds up — for a time. Eventually this shield shows its battle scars and shatters. There’s nothing more inspiring than seeing Captain America with his iconic shield fighting until the bitter end. An elderly Steve Rogers even returns to the present with a full, undamaged shield after one final moment of time travel, passing the red, white, and blue over to his teammate and friend Sam Wilson, the Falcon. 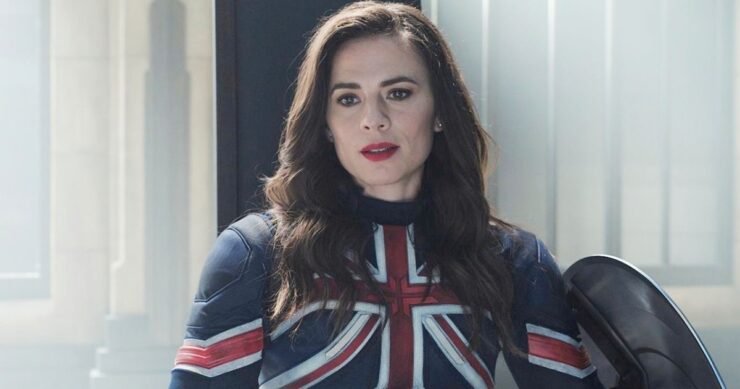 Though this Union Jack shield doesn’t belong to Captain America, per se, it is still the weapon of a noble hero bearing the title of Captain in the MCU. Captain Carter, a Peggy Carter variant who is a founding member of the Illuminati on Earth-838, certainly shares the same forthright bravery as Captain America of Earth-616.

As seen in Doctor Strange in the Multiverse of Madness, she faces Scarlet Witch in battle, never backing down even when the odds are split. With her trusty shield and immense strength, plus the help of Maria Rambeau’s Captain Marvel, Captain Carter nearly defeats Wanda. Unfortunately, against Scarlet Witch, she never stood half a chance.

Which Captain America shield is your favorite? Keep the conversation going over at side.show/geekgroup, and don’t forget to Let Your Geek Sideshow!

Assemble the Avengers and be sure to browse our full lineup of Marvel collectibles for your super hero Multiverse.