7 ridiculous tricks Loki almost got away with

It seems like Thor’s work is never done when it comes to the trickster Loki. From making deals with mad titans to vying for the throne of Asgard, Loki has come up with some pretty dastardly schemes in the last few years. But he wasn’t always the villainous mastermind we know him to be today. In fact, some of his earliest evil plots were downright wacky.

Here are 7 ridiculous tricks Loki almost got away with:

As punishment for his earlier attacks on Thor, Loki is forced under the watchful eye of Heimdall, who is commanded by Odin not to let the trickster out of Asgard. Of course, with Thor on Earth, Asgard is no place to cause mischief. But how to get past the all-seeing guardian of the Bifrost?

Loki disguises himself as a green snake and travels down the green stripe of the rainbow bridge, and slithers right past Heimdall. The watchful man somehow totally misses this, and Loki is home free to terrorize Thor on Earth, where he gets right back to work doing just that. 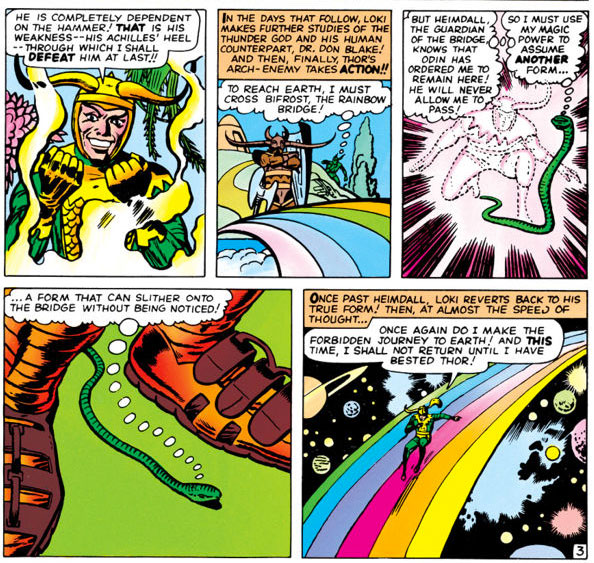 Upon arriving on Earth, Loki proceeds, in disguise, to the office of Dr. Donald Blake, looking for his brother’s weaker form. At the reception desk he finds Nurse Jane Foster, who he hypnotizes into letting him in to see the doctor. Then, she’s given instructions to wait for Loki- he has more plans for her yet.

Loki catches Dr. Blake by surprise, who quickly transforms into Thor. Before either brother can begin the fight the trickster invites Thor to the park in an hour, probably not for a nice walk outside. Thor agrees and the two depart before meeting again later.

Thor arrives at the park in full battle regalia, where he finds Loki was waiting for him. After being teased, the thunderer throws the hammer at full force towards his brother, who sidesteps the attack. Just then, Jane Foster appears, apparently having been invited to the gathering as well.

It turns out Loki still has her hypnotized, and she was told to come to the park as bait for Thor. With a swift motion, Loki turns a nearby tree into a tiger and sets it on Jane. The god of thunder, hammerless, has to choose whether to go after Loki or stop the tiger going after his love. He makes the gallant choice and wrestles the tree-tiger into submission.

Loki, however, has already pulled his next prank! The tiger was just a distraction. Mjolnir has been locked away in a magical box, and without access to the hammer’s magic, Thor turns back into Donald Blake.

Thinking he has won, Loki turns into a pigeon and flies off to cause more chaos in New York. Donald Blake is powerless to stop him, and gives his attention to Jane, who has fainted under the stress of getting attacked by a tiger.

The god of mischief, free to roam the city, does what any good villain would do- turns the city into ice cream and candy. Totally normal, right? Ice cream cars begin to melt in the sun, dogs lick at candied bicycles, and the situation gets even stickier than it already was! Loki thinks it’s the best fun he’s had in ages.

Just to mess with the citizens of New York even further, Loki uses his magic to turn them into “negatives.” On the page, they appear as outlines of themselves, blank in the middle. This causes appropriate panic and terror, as no one can recognize one another.Speaking of blanks, Loki’s crazy mischief takes a step up when he interrupts a military gun practice, turning dangerous guns into winged weapons. Surprised soldiers let go of their useless rifles and bazookas as the weapons begin to fly away, out of their control.
While all this madness has been going on, Donald Blake has come up with a few tricks of his own. 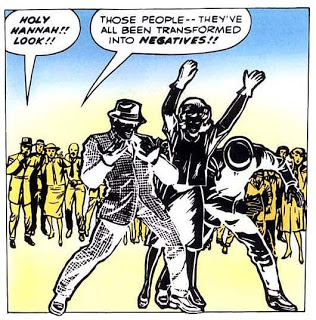 Thor is no trickster himself, but it doesn’t mean he can’t come up with a scheme or two himself. He promises to defeat Loki in another showdown at the park, where somehow he appears with his hammer and full armor, despite the magical box containing Mjolnir still being in place. This confuses Loki, who lifts the enchantment to find the hammer still where he left it.

In this moment, Donald Blake leaps from the bushes and grabs the hammer, becoming the real Thor, revealing that the other Thor was a dressed up mannequin. How did he have the time to make an entire Thor costume on such short notice? Any cosplayer will tell you it’s not that easy. 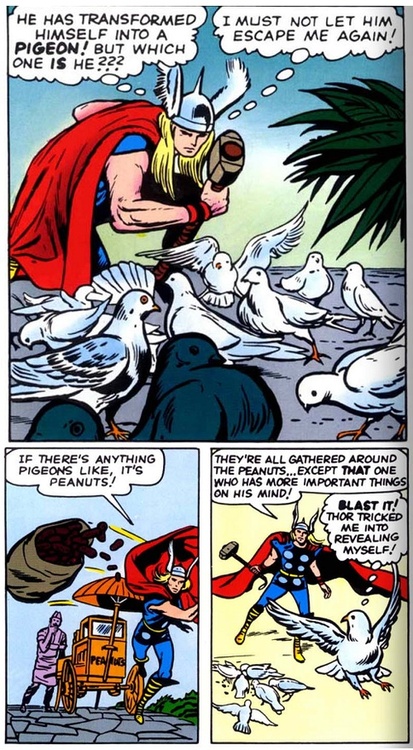 Seemingly defeated, Loki has one final trick up his sleeve- or under his wing? He transforms back into a pigeon to escape from Thor, and flies off to the other side of the park. Here, he blends in with the other pigeons. No one can tell which bird is really the bad guy until Thor comes up with another clever plan of his own. Birds like peanuts, right?

Thor finds a local cart vendor and takes a bag of peanuts (he’ll probably pay for it later, okay?) and tosses it at the birds who all flock towards the free snack – except one. Loki, not being your average pigeon, does not fall for the temptation. This forces him to reveal himself, and Thor, who has also taken the net from a tennis court, launches himself at the odd-bird-out.

Ensnaring Loki in his net, Thor takes his tricky brother all the way back to Asgard where Odin can dole out more punishment, maybe a few more chores to keep Loki occupied. It didn’t work the first time, but maybe the god of mischief just needs a little more guidance. Maybe? Probably not.

You might be surprised to find that every one of these zany antics come straight from a single story; The Vengeance of Loki written by Larry Lieber in Journey into Mystery #88. Seems like Thor and Loki had a very busy day! So, does the god of mischief live up to his name? Do you think you could have done better at coming up with schemes to annoy or even defeat Thor?

Until next Thorsday, tricksters!

Rowan, our other favorite Wonder Woman