A Guide to Daredevil’s Many Costumes

Matt Murdock is the Man Without Fear. He is a blind hero with hyper-enhanced senses, granting him the ability to perceive the world in extraordinary way. His hearing, smell, taste, and touched are amplified to unknown levels, to the point where he can taste one exact ingredient in ice cream, and know the exact location it was created.

Like every hero, Daredevil has to protect his secret identity and keep his body from harm while patrolling Hell’s Kitchen as a vigilante. Let’s look at the many costumes he’s had over the years! 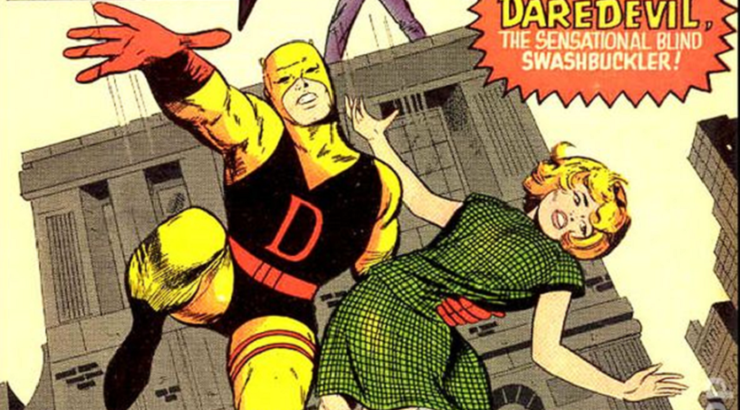 For the first six issues of Daredevil, the Scarlet Swashbuckler was actually a bright yellow! This was his very first design, and fans still appreciate this look. After disappearing from publication, it eventually returned in a storyline called Daredevil: Yellow.

These bright colors showed Daredevil to be a confident hero, ready to fight in broad daylight. But this early design didn’t last long. By issue #7, everything changed. 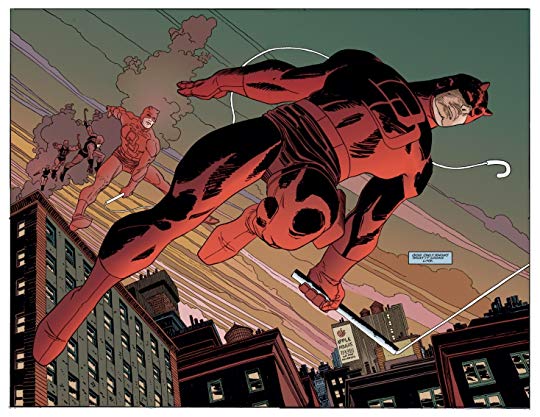 Starting in issue #7, Matt Murdock donned the classic red cowl and full body suit. The complete design overhaul still remains his most prominent design, and looking at it, you can see why.

The plain red suit lets artists play with light and shadow in a way that emphasizes Daredevil‘s movement and muscles. It also truly emphasizes that he is the Devil of Hell’s Kitchen. 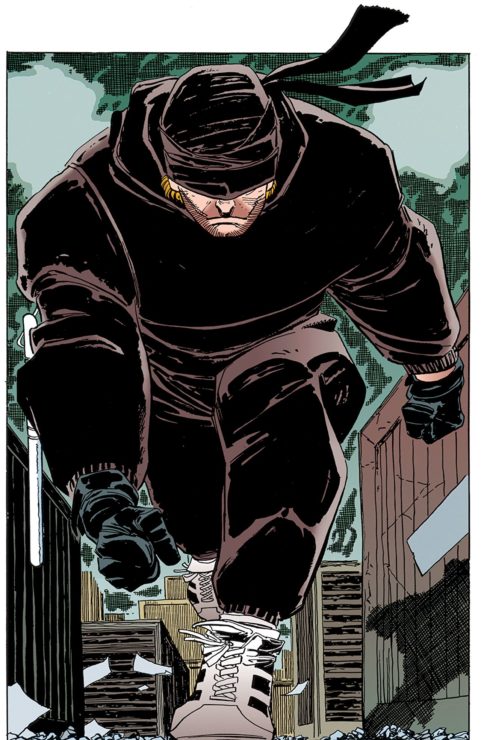 Frank Miller’s Man Without Fear retells Matt Murdock’s origin story, and shows the process of his costume evolution. We follow Matt through his entire thought process, learning what it means to be a hero, and learning his moral and physical limits.

This darker look took some of the more “costumed” elements out of Daredevil’s appearance, showing him as the true street-level fighter he is. It’s a brilliant story with a realistic tone that cuts deep into the heart of what makes Daredevil a true hero. 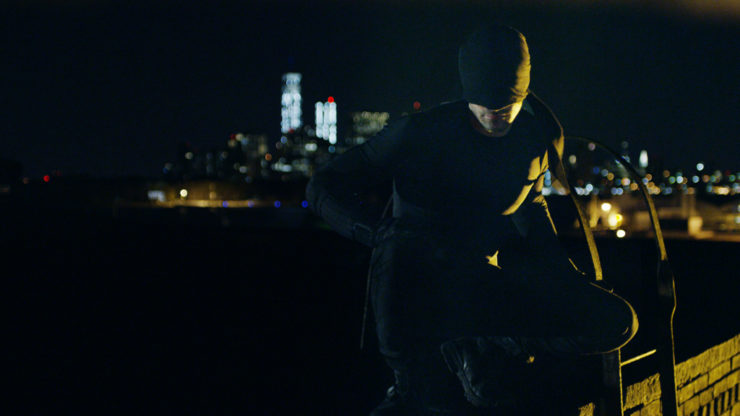 Frank Miller’s black masked costume design is the basis for the brilliant first design in the Netflix adaptation. Once again, the realism of this series is emphasized by the costume.

We learn through the story that it’s not about the gear, but rather about the bravery of the person behind the mask. Daredevil is always willing and eager to go after systematic evil. 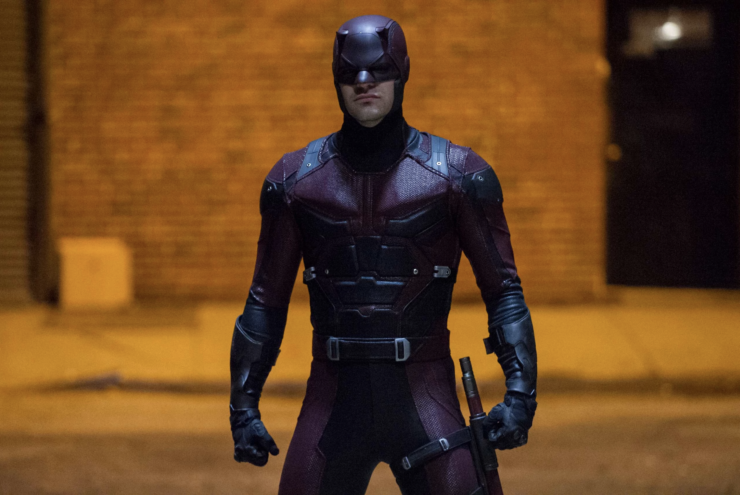 The Netflix series costume got even better when Matt Murdock teamed up with Melvin Potter to get a brand-new full-blown devil costume. Practical and armored, this stylish look reinvented the Man without Fear in live action.

Ryan Meinerding, the Head of Visual Development at Marvel Studios, designed this suit for the series, and it couldn’t be cooler. This costume truly brings Daredevil to life, and shows him in all his belt-buckle, strapped-up, ready-to-go glory. 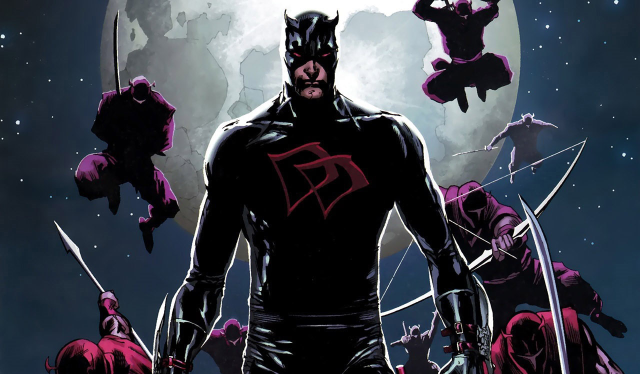 In the 2010 series Shadowland, Daredevil is possessed by a creature called “the Beast” and becomes the leader of the infamous ninja clan The Hand. He truly embraces the inner beast, and dives into the darkness.

In the Shadowland series, he takes on a shadowy black suit, accented with red details that make this costume is terrifying. Extended horns and red eyes bring out the true evil within Matt Murdock. He takes the form of the devil himself, and wreaks havoc on all of Hell’s Kitchen. 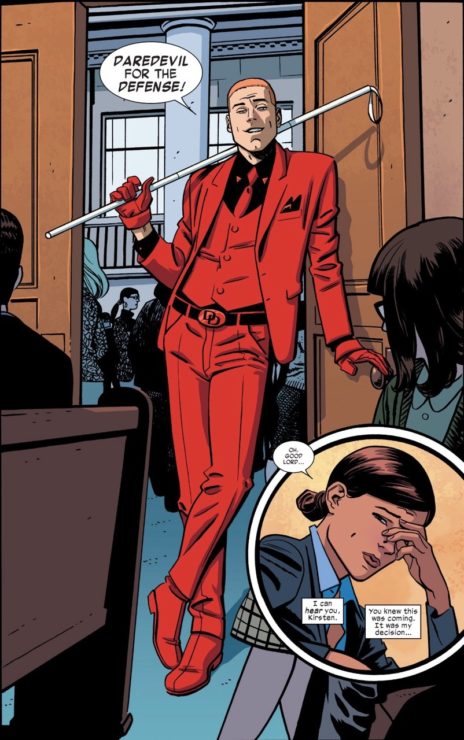 Everything changes in one series where Daredevil’s secret identity is revealed. Since he has nothing to hide anymore, Matt Murdock dons a comical three-piece red suit. The suit has the same charm as his classic red crimefighting costume, but lets him walk around in a court room.

Frankly, it would be quite intimidating to have to argue against the Devil of Hell’s Kitchen, and Matt Murdock certainly uses everything at his disposal to help the city and people he cares about.

Which Daredevil costume is your favorite? Let us know in the comments, and don’t forget to Let your Geek Sideshow!

Send out a radar for all your favorite Daredevil collectibles, and complete your collection!