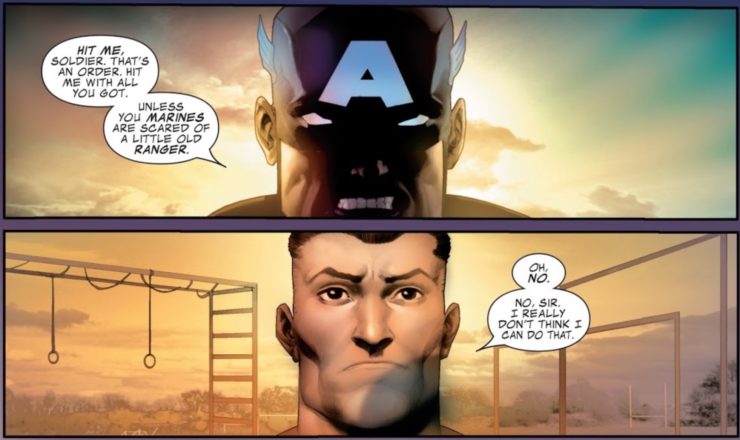 The above panel is from a comic book that has Captain America talking to some newer marines. Cap walks up to one of the marines and orders the man to hit him. Frank Castle, the marine in question, declines to strike the hero.

Steve Rogers is trying to train these marines and get them ready for challenges they could never imagine, and even still, Frank Castle refuses. He will not hit the man who, in his mind, symbolizes the epitome of honor and bravery. And even when he becomes the Punisher, Castle does anything and everything he can to protect the innocent and be an honorable vigilante. Even if this means disobeying orders from Captain America himself.

Captain America and the Punisher have always had a complicated relationship in Marvel Comics, seemingly built on a one-way respect. What is their relationship like, and why?

Steve Rogers was born on July 4th, 1922 to a very poor Irish immigrant family. He was a weak kid with a strong heart, so he joined the military to fight off against the greatest evils in the world. He was given a second chance at life after undergoing Dr. Erskine’s super soldier recruitment program. When he got frozen in the ice, he lost an entire lifetime with the people he loved.

Frank Castle, born Francis Castiglione, was raised in an Italian immigrant family. He went to war (either in Vietnam or the Arabian Peninsula depending on the storyline), where he fought tooth and nail to survive. Captain America was his idol, and he did everything he could to live up to his standards. When his family was killed by the mob, he lost an entire lifetime with the people he loved.

They are both soldiers who want desperately to protect and care for the world. They both have an incredible resolve and have taken justice into their own hands more than once. In Marvel’s Civil War, Spider-Man even says that Captain America and Frank Castle are practically the same in every way, they just lived through different experiences. Caps’s wartime efforts thrived on patriotic spirit and American exceptionalism, while Frank’s deployment was gritty, brutal, and sometimes viewed as shameful.

Are they simply a product of their time? Is Frank’s deviation from Cap’s ideal purely a response to government corruption? Or is there something more? 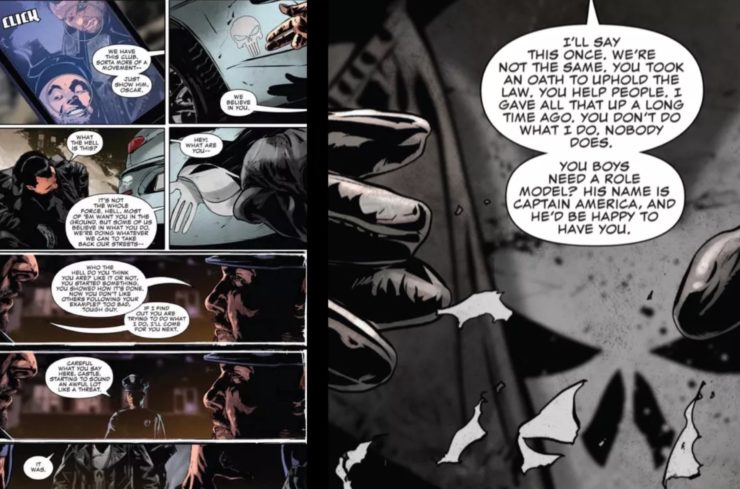 Steve Rogers was given a super soldier serum to enhance his physical abilities and was perfectly preserved in ice for several decades. He was more powerful at 120 years old than Frank Castle was at his peak. There’s no way to compare their physical feats. When it comes to Captain America and Punisher, it’s entirely a discussion of morality.

Captain America will not kill. No matter how evil the foe or dire the situation. Captain America believes in second chances, and he believes that everyone can be redeemed. Punisher doesn’t feel the same.

Punisher believes that there is only one way to make sure a villain will never do evil again, and his judgement is final. And despite Punisher’s respect for Captain America, even he doesn’t believe that he’s of the same caliber as his hero. In Punisher Vol. 12 #13, there were two police officers who were major fans of his who wanted to take a picture with the vigilante. They showed off their Punisher death’s head decal on their car to show how much they liked him. Frank Castle was absolutely livid.

He responded saying, “I’ll say this once, we’re not the same. You took an oath to uphold the law. You help people. I gave that up a long time ago. You don’t do what I do. Nobody does. You boys need a role model? His name’s Captain America, and he’d be happy to have you… If I find out you are trying to do what I do, I’ll come for you next.”

He knows that what he does is unredeemable. He doesn’t want to be redeemable. He doesn’t want to be good. He wants to enforce an ideal in a way that no one else can or should. Captain America has always been the moral ideal, and will not bend or break. The Punisher is not just punishing villains, but he’s punishing himself. He knows he is not a good guy, but he is positive that his methods are effective. 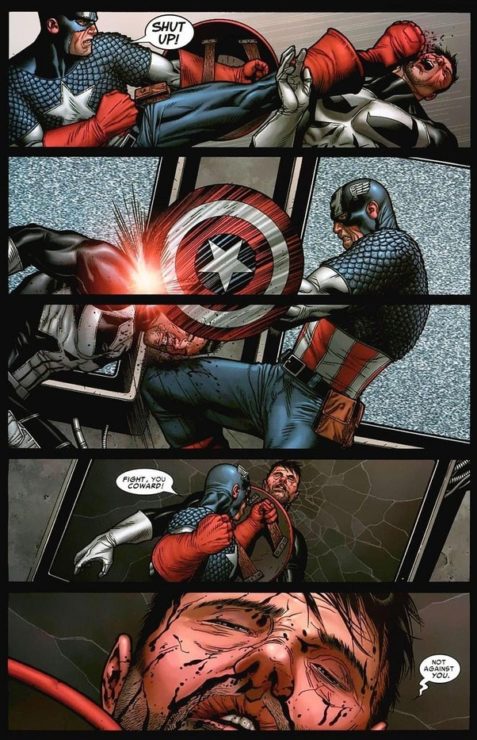 Most comic book fans narrow down the summation of Punisher and Cap’s relationship to this page in Marvel’s Civil War. Punisher joins Captain America, but when he sees villains in the hideout, he doesn’t care about the Civil War. He sees villains and he shoots. He kills two of the men without hesitation.

Captain America pummels him for it but is completely taken aback when Punisher won’t hit back. He screams, “Fight, you coward!” But Punisher refuses once again. “Not against you.” This is not only because Captain America is his idol, but because Punisher knows that Captain America is right. His actions don’t deserve to be defended, and he rarely takes the time to defend them. He simply acts.

Captain America recognizes the Punisher‘s skill and the trauma he’s been through, but he refuses to acknowledge him as a hero for stooping to the level of those villains.

When Captain America dies in Civil War, Punisher changes his outfit to pay homage to his greatest hero. He has rarely taken on Cap’s mantle and in other timelines, would never do such a thing, because Castle knows he is not moral good. He is the Punisher. But at the end of the day, Frank Castle will do whatever it takes for Captain America’s ideal to survive, even if it means becoming the thing he hates the most. 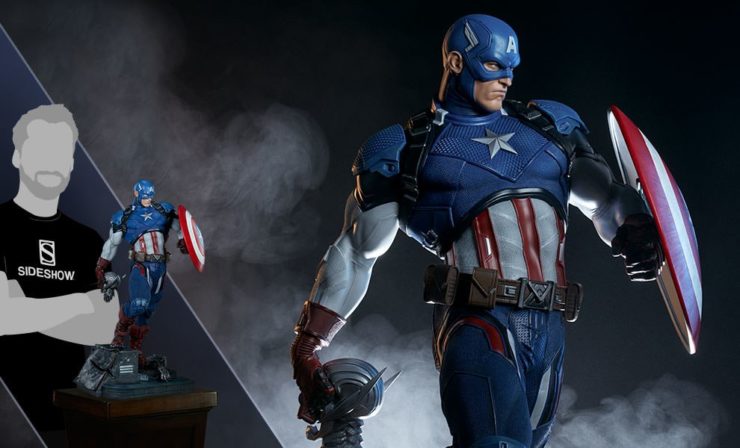 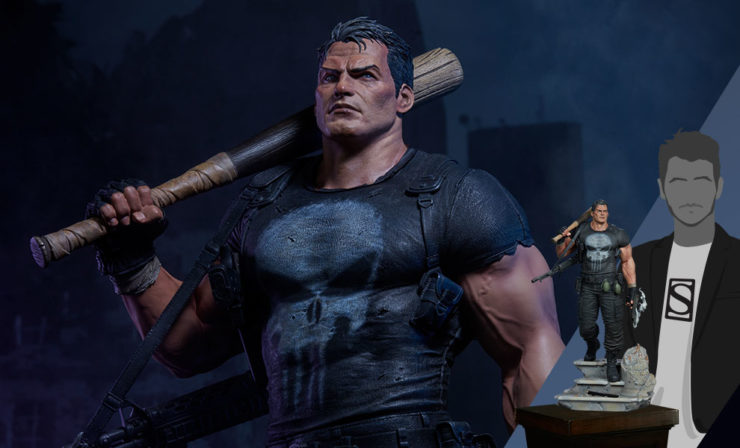 What other superhero relationships do you want a closer look at? Let us know in the comments, and don’t forget to Let Your Geek Sideshow!