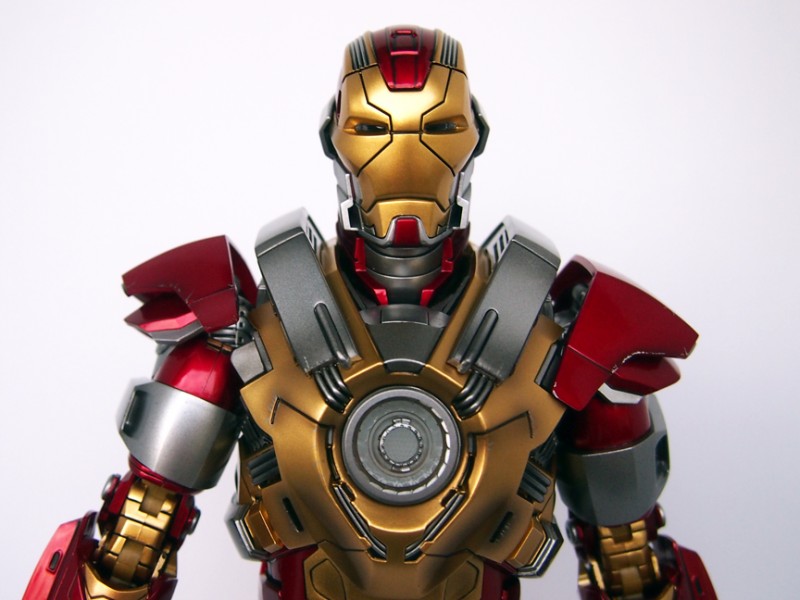 There’s a new Hot Toys figure in town, and he’s bringing the party with him to collections everywhere.

Sideshow Collectibles sent us a sneak preview of one of the newest additions to the it’s growing Iron Man collection, the Mark 17: Heartbreaker, and (no pun intended) it blew us away.

Packaging: The Mark 17: Heartbreaker figure comes nestled safely inside a cardboard box and plastic encasements. The attention to detail that went into the design of the packaging whets your appetite as soon as the package arrives; the box is sleek and attractive, the figure prominently displayed on the front. Inside, a rundown of the creative team is displayed under a quippy headline, an extra nod that Iron Man 3 movie fans are sure to love.

Inside the packaging, no detail was overlooked when it comes to getting your figure to you safely. Protective strips of wrapping have even been inserted to joints with extra armor and range of motion, to ensure no scuffing or friction has degraded the quality of the craftsmanship of the figure. The packaging overall sets a high expectation for the quality of the figure, which the team goes on to exceed at every turn. 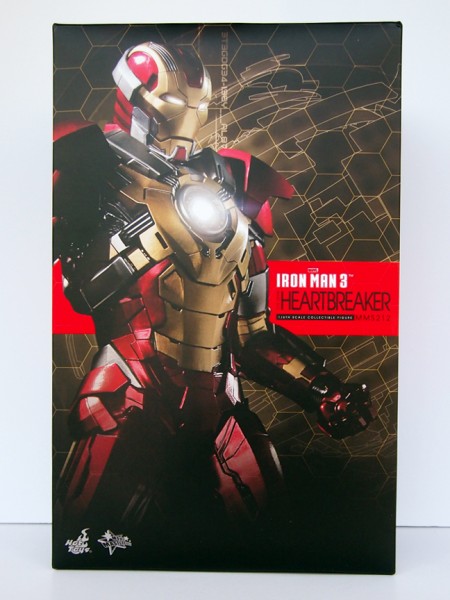 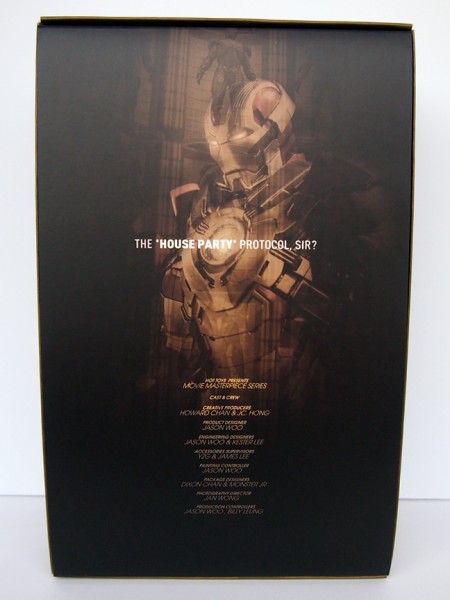 Aesthetic: The Iron Man 3 Mark 17: Heartbreaker figure is impeccable. No detail was spared in the building of this model. The gold and crimson paints used have depth and texture, giving the figure a hyper realistic look. The intricate attention paid to the armor shines through at every turn: flex the knees and you’ll find layers of protective coils and plates, just like on the suit in the film. Even the hands are beautifully crafted, right down to the brushed metal coils between finger joints in the inarticulate hands. 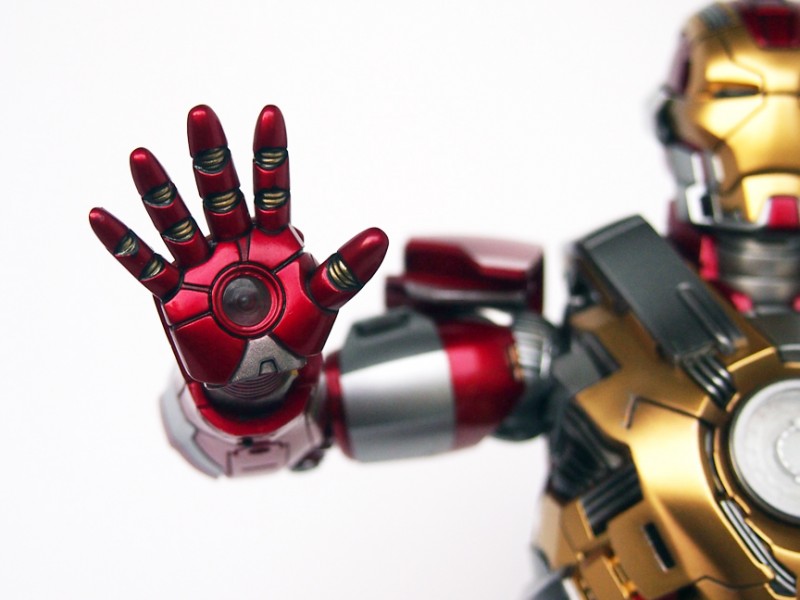 Mild tarnishing on the metal and intentional chipping on the edges of some of the armor plates give the feeling that this suit has seen battle action. The mask facial expression is hard and impassive, and is doubly impressive when you activate what is arguably the figure’s coolest feature: the LED light insets. 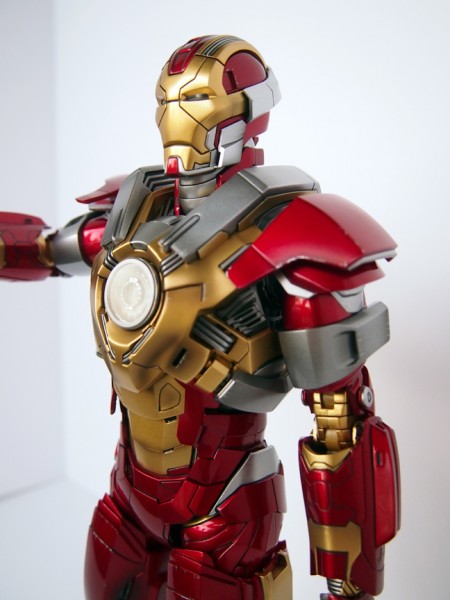 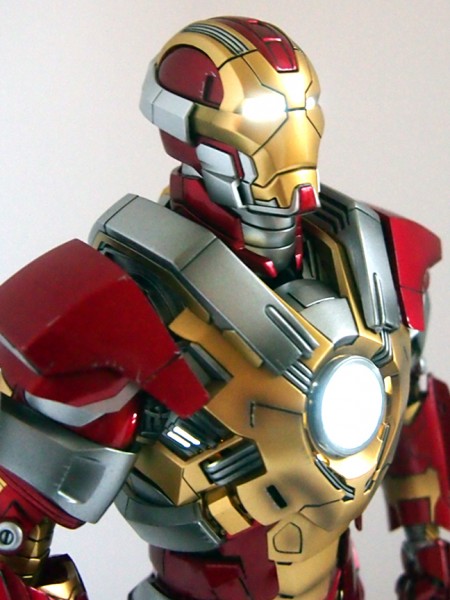 That’s right, this beauty lights up. The figure is equipped with special power compartments dedicated to powering lights for the head mask, chest plate and both hands. And don’t worry: all the batteries you’ll need to light the figure are included in the package. The package includes a great tool to help you remove panels that mask the battery-insert sites, but you’ll need a small phillips head screwdriver (not included) to unlock panels and re-secure them once the batteries are inside. 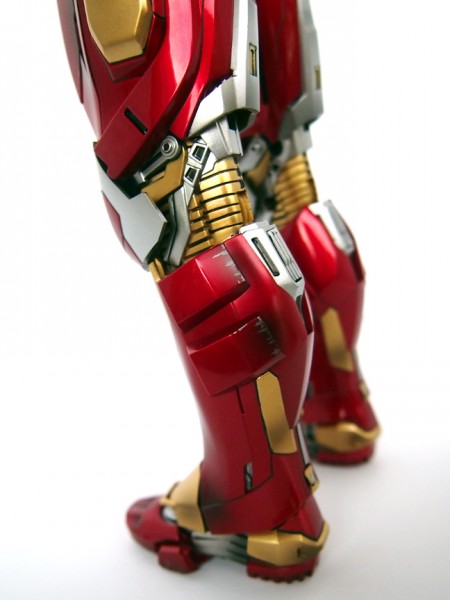 Posability: The figure stands beautifully on its own as well as on its stand. The torso extends and swivels to give you more posing options, and plates at the hips lift to increase the figure’s range of motion.Three sets of hands come with the figure: fists, fully posable fingers and light-up hands with the palm bared, ready for action. The wide range of motion and the articulation of the posable hands and the light-up hands give you almost limitless options when it comes to displaying your figure.Overall value: This figure will be one the shining gems of even the most serious figure collector’s shelves. Even if you’re just starting your Iron Man collection, it’s a must-have. It’s certainly well-crafted enough to sit comfortably at its price point, and with the extra care paid to details and authenticity, it’s a quality figure you’ll love having as part of your line-up.

This week in geek – Spooktacular recap!