The Marvel Cinematic Universe goes to great lengths to fuse everyday reality with the over-the-top world of super heroes. Just ask daydreamer and super fangirl Kamala Khan! Naturally, systems are needed to keep an eye on everything cosmic, magical, and extraterrestrial in order to protect civilians. S.H.I.E.L.D. of course springs to mind, with its prominent presence in the MCU. But it’s also where Damage Control comes in.

Damage Control started off in the MCU as a S.H.I.E.L.D. subsidiary. At one point, there were even plans for a Damage Control television series. So, in the spirit of Sloth Baby Productions, let’s take a closer look at the Ms. Marvel episode 1 mid-credits scene reveal and some Marvel Easter eggs you might have missed! 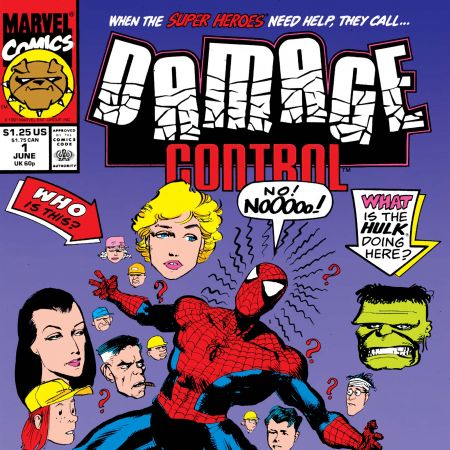 First seen in Spider-Man: Homecoming and later Spider-Man: No Way Home, the Department of Damage Control is a government agency tasked with cleaning up the super messes of super heroes. When the Battle of New York leaves the city in ruins, Damage Control steps in. Director Anne Marie Hoag tells Adrian Toomes that he and his crew will be replaced by the DODC. She tells him he can talk to Tony Stark if he has any complaints — and we all know how that conversation with Vulture went down.

Later, after Peter Parker is framed for the murder of Quentin Beck, the DODC interrogates Peter, MJ, Ned, and Aunt May. Most recently, when Kamala Khan activates the cosmic powers of her nani’s bracelet at AvengerCon, the DODC also takes notice. 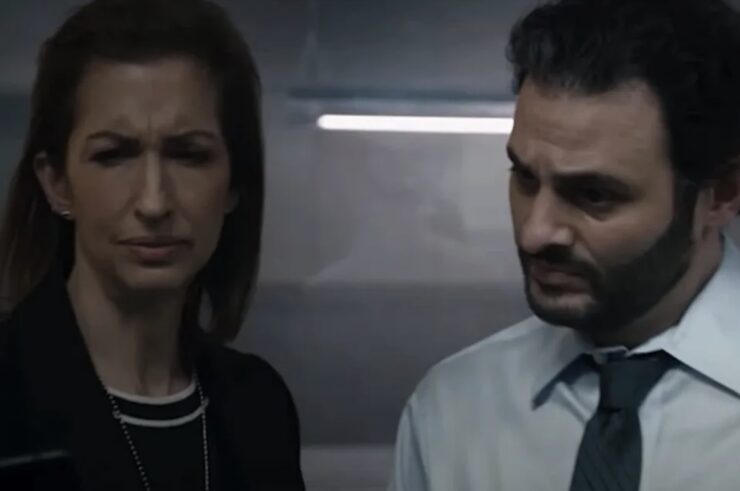 The mid-credits scene of Ms. Marvel shows Agent P. Cleary (from Spider-Man: No Way Home) and Agent Sadie Deever, a new name in the Damage Control roster. Their office desk is littered with documents, and a curious Wanted poster that details someone “considered armed and dangerous” in connection to a double homicide on July 12, 1979. However, the agents’ main concern is Kamala. Agent Deever even comments, “I’ve never seen powers like that.” Once he views the video, Agent Cleary says they should bring Kamala in. For what? Right now, it’s unclear.

What is Damage Control?

With Damage Control’s history in the MCU, they might just want to investigate Kamala’s motives and determine if she’s a threat. But various details from the Marvel comics provide hints at other possibilities.

In the comics, Tony Stark and Wilson Fisk originally funded Damage Control. Yeah, you know, Kingpin. Eventually, both shareholders pulled their funding. The MCU’s DODC was created and funded by Tony Stark – and now that Kingpin has appeared in Hawkeye, it’s possible he will return as a figure in the shadows of Damage Control. (Yes, Maya Lopez did have quite the face-off with him in the Hawkeye finale but, in the comics at least, Kingpin somehow survives this eye-opening encounter.)

Though Damage Control is in charge of repairing structural property damage caused by super hero and super-villain actions, the department also collects artifacts of interest. This could be a major reason they’re interested in Kamala Khan on Ms. Marvel. 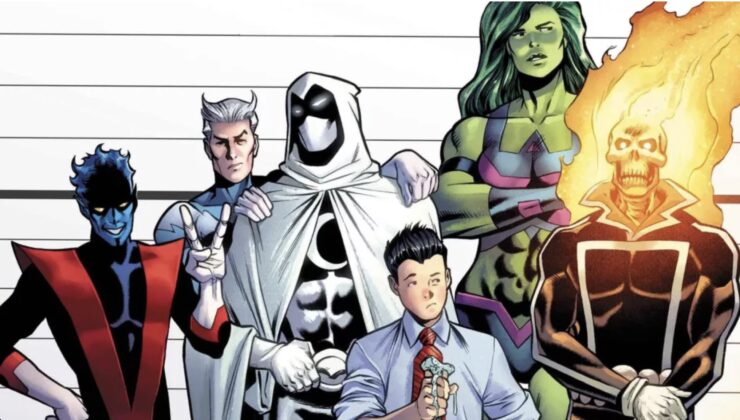 Damage Control has many connections to other super heroes as well, like the Fantastic Four. Vice President Kathleen O’Meara had a short-lived fling with Ben Grimm, AKA The Thing, and the comics version of Agent Cleary was offered a job by Doctor Doom. The DODC has also archived various artifacts from Tony Stark and Reed Richards.

Yet another member of the Damage Control team was a former villain, Vincent Patilio, AKA Leap-Frog. His son, Eugene Patilio, would assume a mantle similar to his father’s: Frog-Man. A character appearing to be Frog-Man will be in the upcoming She-Hulk series. All these facts could easily be related, especially since She-Hulk is featured in the upcoming Damage Control comic series (alongside Moon Knight, Quicksilver, Ghost Rider, and Nightcrawler).

Ms. Marvel Premiere Easter Eggs You Might Have Missed

In the comics, Kamala Khan is a prolific fanfiction writer under the pen name SlothBaby. She has covered topics ranging from Captain Marvel to the Avengers, and even occasional X-Men stories like “Cyclops and Emma Frost’s romantic vacation in Paris” — which might have additionally been referenced by her Sloth Baby Productions video titled “Ant-Man and the Wasp’s romantic vacation in Paris!”

The name is also her gamer tag in the MMORPG World of Battlecraft, where she is part of a guild called the Iron Legion. SlothBaby is an orc shaman.

The SlothBaby itself is an angel-winged sloth that frequently appears as plushies, daydream buddies, and other visual references in the comics. Now, it’s Kamala’s web video channel name, but we see Aamir Khan toss her a winged sloth stuffed toy during the episode as well. Long live the SlothBaby!

Speaking of gaming, one of Kamala’s upcoming video projects is her theory that Thor is secretly a gamer. We’re not sure where she gets her sources, but Avengers: Endgame confirmed this connection when the God of Thunder stepped in to defend Korg from NoobMaster69 in a particularly heated game of Fortnite on the PlayStation 4. Wonder if anyone in the MCU has been able to score a Ps5 yet! 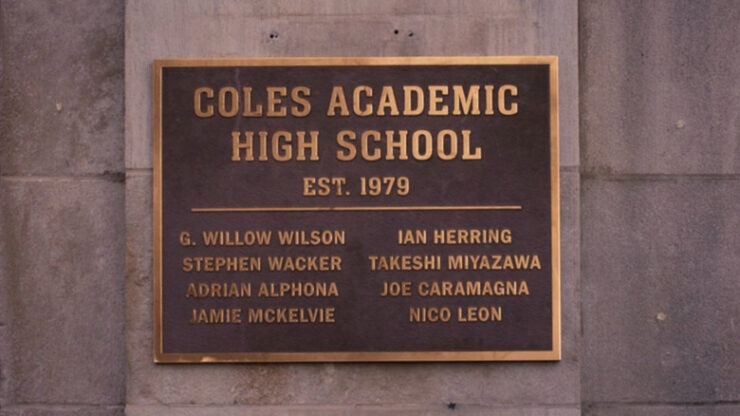 There are plenty of Easter eggs to be found within the walls of Coles Academic High School, especially when it comes to the creative writers, editors, artists, and other Marvel team members who brought Kamala Khan to the page. A lingering shot of the school founding plaque features these names:

Kamala Khan was also co-created by editor Sana Amanat, who may yet receive an Easter egg as the series progresses.

That’s not the only place to find the creators referenced, however! Kamala’s counselor Gabe Wilson is also presumably a reference to writer G. Willow Wilson, with whom the academic advisor shares initials.

While this is less of an Easter egg and more of a clever wink for MCU fans, when Kamala insists to her parents that there is “no big Hulk and little Hulk!” viewers took this to be a sly reference to She-Hulk, the next Marvel Studios streaming production to follow later this summer. Additionally, it could hint at the anticipated appearance of Theodore “Teddy” Altman, the Kree-Skrull hybrid known as Hulkling in the Young Avengers. But for now, it’s a sign that the world only knows about Bruce Banner. Jennifer Walters might not have hulked out just yet, but we’ll see her origins soon enough. 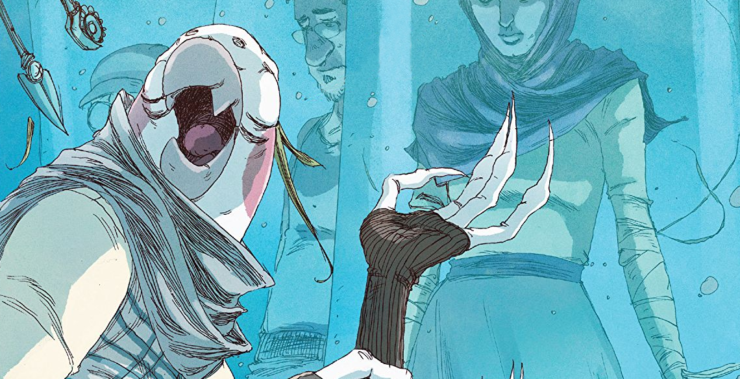 Fans have been wondering which, if any, of Kamala’s odd adversaries might appear on screen as the antagonist for the season. While it seems Damage Control might be shaping up to be a force of conflict, a nod to one of Ms. Marvel’s first and most feathery foes can be seen while she and Bruno test the photon gloves on the rooftop. Seen backwards, a sign for “EDISON ELECTRIC” is lit up brightly behind them.

The Inventor was an early antagonist for Kamala Khan. He was a bird-headed clone of inventor Thomas Edison, whose DNA got spliced with a cockatiel in a modern experiment gone wrong. Yeah, seriously. Experimenting with alternative energy sources, The Inventor kidnaps teenagers and drains their bodies of energy for fueling his machines. He first appears in the final issue of the Vol. 1: No Normal opening arc, and continues through Vol 2: Healing Factor in the comics.

Something Strange is Afoot at the Circle Q

Bruno, Zoe, Kamala, and Nakia investigate a wormhole in the Circle Q.

Spot the Smushee machine in this scene from Ms. Marvel comics

The Circle Q convenience store serves as a home base for Kamala Khan in the comics. Bruno is one of the employees there, so she is frequently able to hide out, change costumes, or recharge with a snack while he’s on the clock (because in the comics, Kamala’s polymorph powers burn a LOT of calories). Fans can probably expect to see the Circle Q pop up a lot more in the series. For now, they can spot an icy treat machine labeled “Smushees” — the Marvel comics alternative to the Icee, Slurpee, or the Slush Puppie.

While it’s made pretty obvious that the site of AvengerCon is significant, it’s worth pointing out again that Camp Lehigh is a military base in New Jersey and a former Strategic Scientific Reserves training facility from World War II. The SSR went on to become S.H.I.E.L.D., but before then, Camp Lehigh was used to prepare candidates for Project Rebirth, which gave the world Captain America.

Apart from Captain America: The First Avenger, Camp Lehigh also appeared during the 1970s portion of the Time Heist in Avengers: Endgame, and it was seemingly destroyed in 2014 during Captain America: The Winter Soldier. It was rebuilt to host the first New Jersey AvengerCon sometime after 2023, but in yet another alternate reality, it was a bastion against the zombies seen in Marvel’s What If…?. 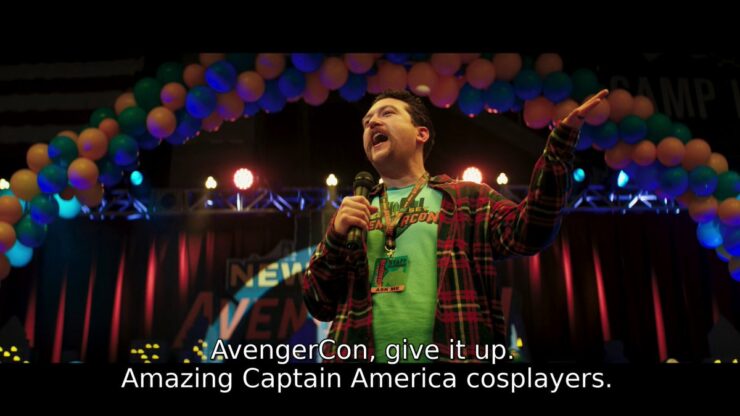 The announcer for the cosplay contest at AvengerCon is a familiar face to fans who have been to conventions where Marvel Studios is exhibiting. Known as “Agent M,” host and podcaster Ryan Penagos has been announcing for Marvel, hyping crowds, and interacting with fans for many years now. Outside of conventions, he is the Vice President and Creative Executive for Marvel New Media. This cool cameo for active Marvel fans made the AvengerCon experience feel that much closer to home. When can we get our tickets for next year? 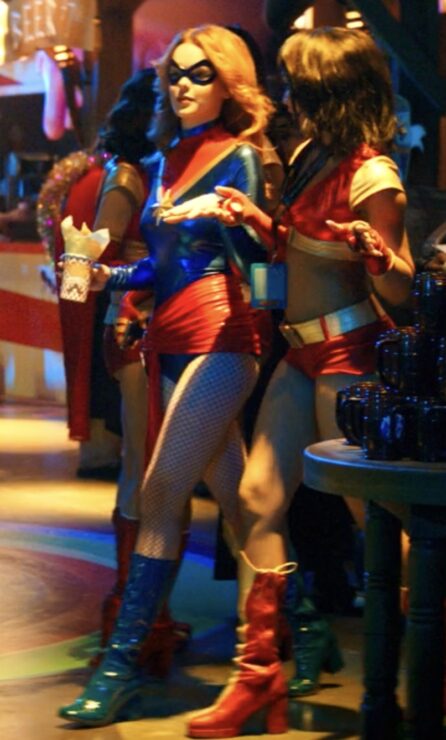 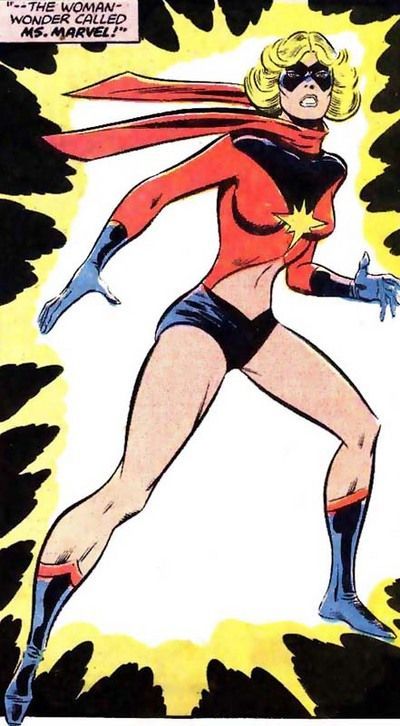 All’s fair in love, war, and cosplay contests! Kamala scoffs at popular girl Zoe Zimmer’s inaccurate Captain Marvel costume, which fans might recognize as a mashup of several Carol Danvers costumes from over the ages. Most notably, it bears a less midriff-bare resemblance to the very first Ms. Marvel costume from the ’70s, with the modern Captain Marvel color palette. The sash and swimsuit-like nature also draw connections to the famous black Ms. Marvel “Warbird” costume as well as Jamie McKelvie’s modern design for when Carol first claimed the Captain namesake.

Many Marvel shows like to wink at the colorful designs of more classic costumes — from WandaVision‘s Halloween episode to Classic Loki and Kate Bishop’s rejected Hawkeye designs. Inaccurate, or just out of fashion? You decide! 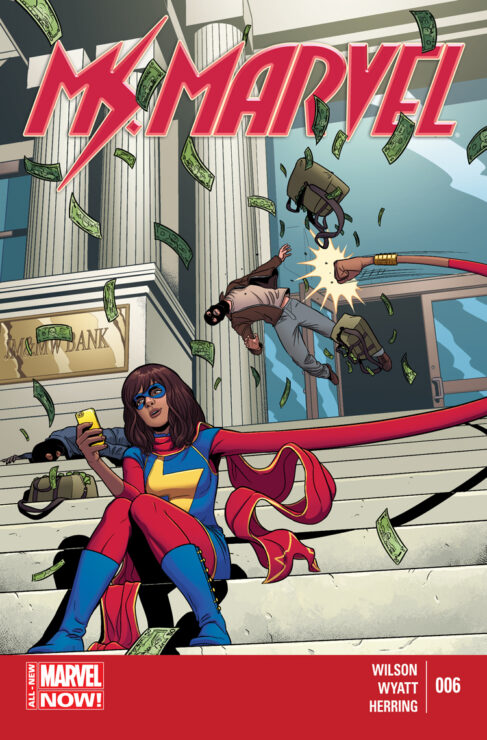 See if you can spot the cover to Ms. Marvel #6 in the ending credits!

Comics readers might have noticed that the colorful ending sequence of the episode featured motion-graphic editions of actual Ms. Marvel comics covers and panels. Some of the familiar pieces include series covers from Jamie McKelvie, the iconic Ms. Marvel #1 cover by Sara Pichelli, and panels from Takeshi Miyazawa and Adrian Alphona.

Not only are these designs superimposed over buildings in the credits, but Kamala has actual Marvel comics artwork on her bedroom walls. See if you can spot designs from Terry Dodson, Jamie McKelvie, Kris Anka, and more! It’s a nice touch to connect Captain Marvel fans (often called the Carol Corps.) to a true fangirl like Kamala Khan. Would these comics be considered biographical in the MCU?

Additionally, connecting everything together, fans can spot a Trust a Bro van (from Hawkeye) on the streets of Jersey City in the ending credits. New York and New Jersey are neighbors, so it makes sense that the Tracksuit Mafia would have a local presence, even if it’s unlikely we’ll see the bros attacking Ms. Marvel’s home turf, bro.

The first episode of Ms. Marvel was packed with details! Keeping in mind Damage Control’s Kingpin connection from Hawkeye and their penchant for investigating young heroes, it’s possible the department might even have a hand in assembling the MCU’s Young Avengers. Only one way to find out — and that’s to keep watching Ms. Marvel!

What Easter eggs did you catch, and which were your faves? Join the conversation alongside other Ms. Marvel fans in the Let Your Spoiler Sideshow Facebook Group, and don’t forget to Let Your Geek Sideshow!

Father's Day Is Coming — Have You Made Your Wishlist Yet?