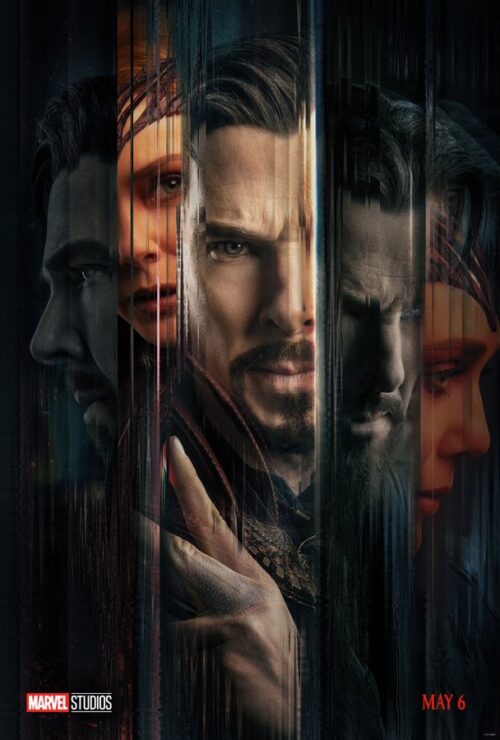 Released initially as a post-credits teaser in Spider-Man: No Way Home, the first trailer for Doctor Strange in the Multiverse of Madness — plus a new poster! — has arrived online for all Marvel fans to see. The new Doctor Strange movie brings together facets of MCU television and film, tying together a universe that is doing its best not to fracture into an uncontrollable multiverse.

Watch the footage below, and then let’s dive into all the mysteries and Easter eggs the Doctor Strange in the Multiverse of Madness trailer has to offer.

Doctor Strange cast a spell to alter the very fabric of reality. “It was the only way,” he insists. That doesn’t mean there aren’t massive repercussions. In Doctor Strange in the Multiverse of Madness, Strange has to deal with threats from throughout the multiverse. It appears as well that the dimension might be breaking, and his own reality is slipping into chaos — or disappearing entirely.

There’s also tentacled monsters to face, other universes to visit, and old enemies to fight. It’s madness indeed for our favorite sorcerer.

When Strange shows up at Wanda Maximoff’s home in the countryside, she tells him she’s been expecting him. Strange surprises her by clarifying that he’s not there to discuss Westview — i.e. the events of WandaVision in which Wanda fabricated her own reality and trapped hundreds of inhabitants in her mental utopia — but because he needs the Scarlet Witch’s help.

With that, Scarlet Witch and Doctor Strange are set to embark on a multiversal adventure for the ages. Will Wanda find her children Billy and Tommy, using Stephen’s crisis for a smidgen of personal gain? Wanda’s motivations are very much tied to her family. But she’s also always been intent on saving the world like any Avenger. It’s exciting to wonder how her journey continues as it intersects with other sorcerers.

Sorcerer Supreme Wong has his hands full trying to train the next generation of sorcerers while protecting Kamar Taj and the Sanctum Sanctorum. He’s also doing research for Shang-Chi, communicating with Avengers Bruce Banner and Captain Marvel, and keeping tabs on plenty of other magical happenings. The man only has so much time — and patience. So in Spider-Man: No Way Home, Wong asks to be left out of Stephen Strange’s reality-altering spell. Now he has to deal with the consequences of Strange and Peter Parker’s decision.

The newest Young Avenger to grace our screens, America Chavez makes her MCU debut in Doctor Strange in the Multiverse of Madness. This interdimensional traveler has the power to create portals. She’s also super strong. Whether she seeks out Strange or he finds her, she’s going to be an invaluable ally against the multitude of threats our heroes are facing as the multiverse cracks wide open.

In the Doctor Strange post-credits scene, Karl Mordo turned his back to the ways of the Ancient One. He used his own power to steal mystic energy from another man, claiming there are “too many sorcerers in the world.” In the new trailer, Karl Mordo has returned to exact vengeance on Strange, Wong, and the other unlucky, untrained inhabitants of Kamar Taj. He tells Strange he’s sorry, which shows he still thinks his path is a righteous one.

With so many villains slated for Doctor Strange in the Multiverse of Madness, including time and space itself, it’s unclear how much of an impact Mordo will have on the entire story. His presence will absolutely be an obstacle, however, and one that will surely test Strange and Wong’s abilities.

Stephen and Christine used to date before Stephen’s accident and arrogance turned the kindhearted doctor away from him. While she helped Stephen in Doctor Strange and knew of his life as a sorcerer, they didn’t rekindle their romance. We don’t see much of Christine in the new trailer besides her walking down on the aisle on her wedding day — while Stephen watches from the audience.

Who is Christine marrying? Is this an alternate dimension/dream, or Stephen’s actual life? And how will he react to losing the woman whose death, in another reality, caused him to turn into…

His actual identity is unconfirmed, but this dark Doctor Strange certainly resembles the evil version of Stephen that was created by too many trips through time in Marvel’s What If…? series. Using the Eye of Agamotto and the Time Stone, Doctor Strange warped himself into a monster full of the multiverse’s beasts and dark magic in order to gain the power to save his true love from certain doom.

In the new Doctor Strange trailer, this Evil Strange faces down a confused Stephen. Smirking and skulking in the shadows, Evil Strange whispers, “Things just got out of hand.” While What If…?’s Evil Strange eventually went back to being a good guy, this one seems anything but. Still, we’ll see what this twisted variant wants in May 2022.

What was your favorite part of the Doctor Strange in the Multiverse of Madness trailer? Let us know in the comments, and don’t forget to Let Your Geek Sideshow!