“Abandon ship? The answer’s no. I’m not breaking up the family.”

As the first female captain to headline a Star Trek series, Kathryn Janeway shepherded the USS Voyager through the Borg-infested Delta Quadrant and safely returned her crew home after seven successful seasons. Janeway would not hesitate to defy Starfleet protocol and would often lead away missions herself, even into a Borg cube where she would make sure she’s the last one out!

Captain Janeway led her crew as a wise single parent, even guiding the holographic Doctor and Seven of Nine, a former Borg, into growing and learning what it meant to be human. Kate Mulgrew’s portrayal of the brave and resourceful yet warm and vulnerable captain endeared her to the millions of fans that cite Voyager as their favorite Star Trek series.

Check out the first unboxing video for this detailed piece and find out even more about the Captain Kathryn Janeway Sixth Scale Figure as host Guy Klender walks you through every aspect of the collectible experience, from the hand-painted portrait to the detailed fabric Starfleet duty uniform jumpsuit and the essential accessories for navigating the reaches of space.


Once you’ve taken your first look at the unboxing above, be sure to bring Captain Janeway home to your crew of Star Trek collectibles. Pair her with other releases from the EXO-6 Star Trek collection to create a fully staffed starship display in your collection! The Voyager collection also includes the Doctor (Emergency Medical Hologram), which makes a perfect companion to Janeway as the ship’s holographic healer.

As seen in the later seasons of the show, Janeway features her traditional shoulder-length hair, and the likeness and more than 30 points of articulation on the figure allow fans to capture the sass and leadership abilities Mulgrew brought to the character with a variety of dynamic poses. Her fabric jumpsuit was meticulously researched to recreate the pattern and colors of the original costume, expertly recreated in this scale. The uniform even has magnets sewn in to allow for the attachment of holsters for her tricorder and phaser, and her communicator badge is affixed to the outer tunic. Every inch of this iconic outfit has been considered in great detail, down to the boots sculpted to match the style of the original series footwear.

As a Starfleet officer, Captain Kathryn Janeway also includes her Type II hand phaser, a TR-590 Tricorder X, a compression phaser rifle as used by the Voyager crew, and of course, her signature coffee cup to start the day right. Every collection needs a captain, so why not bring home this essential Star Trek figure?

Is your collection ready to boldly go with Captain Janeway and the USS Voyager crew? Do you already have a fleet of starships at home? Don’t forget to Let Your Geek Sideshow and tell us in the comments! 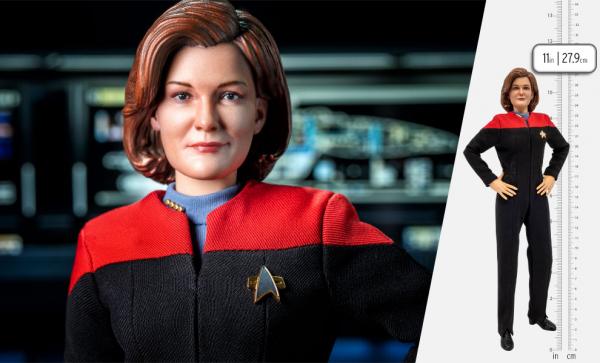