With The Falcon and The Winter Soldier premiering now on Disney+, there are quite a few new comic book characters making their debut in the MCU. One might have already slipped under your radar, unless you’re a devout comic book fan.

Featured in stories alongside Miles Morales’ Spider-Man and Kamala Khan as Ms. Marvel, Joaquín Torres is an often overlooked hero in Captain America’s story. Let’s not fly by too fast, and get a bird’s eye view into his story. 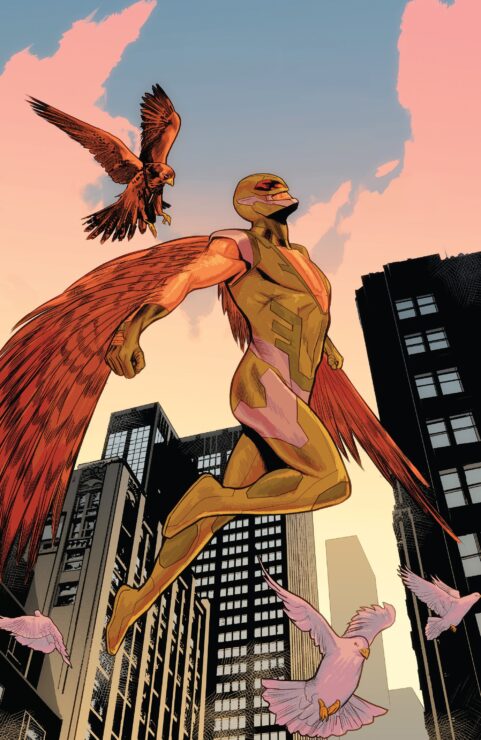 In the comics, Joaquín Torres lived with his grandmother Mariana in Sonoita, Arizona. He was a passionate kid who worked hard to care for the people he loves, and the people he doesn’t even know. He saw the true value of freedom, and went out of his way to give others a fighting chance to have the same freedoms he did. Joaquín worked with people who fought to come to America. But his work from dangerous from the start. He may have known that, but he didn’t realize that dangerous people would do anything to get what they wanted.

Karl Malus, a criminal scientist, was willing to kidnap people for his strange and terrible experiments. While Joaquín was in the middle of providing food for the hungry, he was stolen away. Mariana reached out to the one person she knew would care: Captain America.

Joaquín Torres had his DNA mixed with Sam Wilson’s bird sidekick, Redwing. With the DNA splicing, Joaquín grew partial wings so that he could fly, gained super vision, hearing healing, and more. Not only that, but he also gained a psychic link with all other birds, just like Sam Wilson. With all of these powers, he became Captain America’s new sidekick, the Falcon (since Sam’s promotion meant the name was not in use at that time).

We’ve only seen Joaquín Torres briefly in the debut episodes of The Falcon and The Winter Soldier, but what we’ve seen tells an extremely different story from his comics counterpart… or does it?

Torres is a First Lieutenant intelligence officer in the US Air Force, and he’s worked alongside Sam Wilson- aka the Falcon- quite a few times. They’re an excellent team. With Torres’ ear close to the ground, and his finger on the pulse of the dangerous organization called the Flag Smashers, they make a fantastic duo for espionage and action.

It’s unclear just how big of a role he’ll play in the series moving forward, but we have seen at least one scene where Joaquín Torres and Sam Wilson talk about the technology behind Sam’s high-tech Redwing. He’s still fighting for the people he cares about, and he’s still dealing with the strange scientists of the MCU (like the shady and threatening Power Broker) so there might be more parallels than meets the eye.

We can’t be sure whether or not Joaquín Torres will become the next Falcon. All that we know is that together, he and Sam are already a force to be reckoned with. With the Winter Soldier on their side, there’s no telling what they can accomplish.

What do you think will happen with Joaquín Torres in the MCU? Who would you want to take up the mantle of The Falcon if Sam becomes the new Captain America? Let us know in the comments, and don’t forget to Let Your Geek Sideshow!

Coming Up on The Comics Haul: The Silver Coin #1 and Geiger #1