The ’80s and ’90s brought in a new era of filmmaking that would forever change cinema: the video game movie. Video games were already a fascinating amalgamation of the music, technology, cinematography, and storytelling of the day. However, when adapting an interactive experience into a viewing experience, there had to be changes. 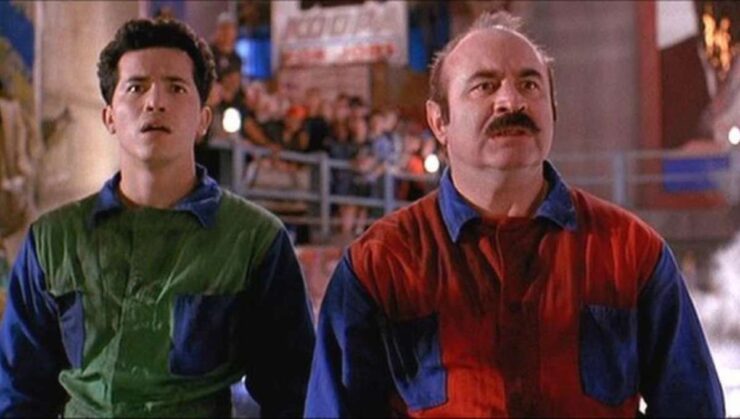 The original Super Mario Bros. game followed the plumber Mario through a series of platform-based obstacles on a journey to save Princess Peach from his archenemy King Koopa AKA Bowser. The game asks you to jump and leap across chasms and on the heads of creatures like Goombas and Koopa Troopas to safely get through a series of castles and canyons. It takes skill and dedication to make it all the way to Bowser’s Castle, where you have to cut the bridge and drop him into scalding hot lava to save the Princess. In many versions of the game, you can play as either Mario or his brother Luigi.

The film, released in 1993, works diligently to follow the two brothers we know and love, Mario and Luigi. It also tries to incorporate the iconic monster designs of the Koopas and Goombas (in its own unique way). Instead of a King Koopa, the Mario Bros. struggle against President Koopa. Beyond those similarities, though, the movie takes quite a few creative liberties, making a unique interdimensional landscape and quite a strange series of hoops for Mario and Luigi to jump through. All throughout, it keeps the core feeling of adventure, and a great villain that must be defeated. It was, in fact, the very first feature film adaptation of a video game. It laid the groundwork for so many more to come. 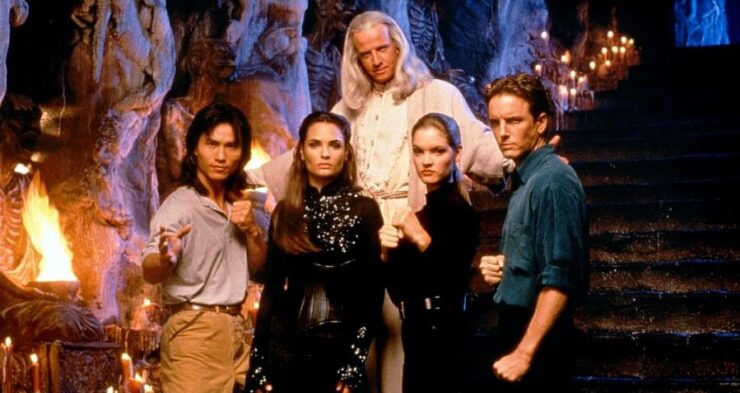 The Mortal Kombat video games are a massive series of multiplayer (usually two player) video games that emphasize the brutality of battle. In fact, it is most commonly known for its “Fatalities” in which the player can use their most powerful moves to absolutely devastate their opponent. Those Fatalities are often brutal, bloody, and absolutely bonkers. The game doesn’t shy away from the violence, nor the creativity, of its fantasy themes. All in the background of this gruesome game is a story of an interdimensional fighting competition, with generations of valiant and violent heroes and villains.

The first film adaptation of Mortal Kombat premiered in 1995, and got multiple spinoffs, from a sequel called Mortal Kombat: Annihilation, to two different television series. The franchise is so beloved that it even received a reboot in 2021, which revived and rejuvenated quite a few of the characters from the original film. The 1995 film pulled from the first and second games for characters and the story of this massive combat tournament. It maintained the core of a struggle between Earth and Outworld, and pushed for powerful fighting sequences, just like the games. Naturally, without players being able to input the actions themselves, the choreography had to be flawless. With the 2021 adaptation, the fighting only got better, and again, significantly more brutal.

Sonic the Hedgehog is a fast-paced platformer that pitches a super-fast blue character against the evil Dr. Robotnik. As Sonic collects golden rings, and collects all six of the Chaos Emeralds, Dr. Robotnik schemes and plans by trapping animal friends inside robots! Sonic won’t let happen, and so he races through curvy green hills and past all sorts of terrain to stop the evil scientist in his tracks. The game is so fast paced that Sonic is drawn just as a blurry circular sprite as he rolls across the stage.

The film adaptation immediately depicts Sonic as one of the fastest creatures throughout all the dimensions. It’s unclear just how many dimensions there are — all we know is that Sonic is on the run. His powers are special, and everyone wants them, from a tribe of echidnas to the evil Dr. Robotnik. Sonic makes friends and races across the country to save himself and the universe from the scientist’s evil schemes. They maintain the speed of the chase all throughout the film, but in lieu of allowing the player to race past obstacles, they create high intensity chase scenes and use bullet-time effects so that viewers can feel as fast as Sonic. 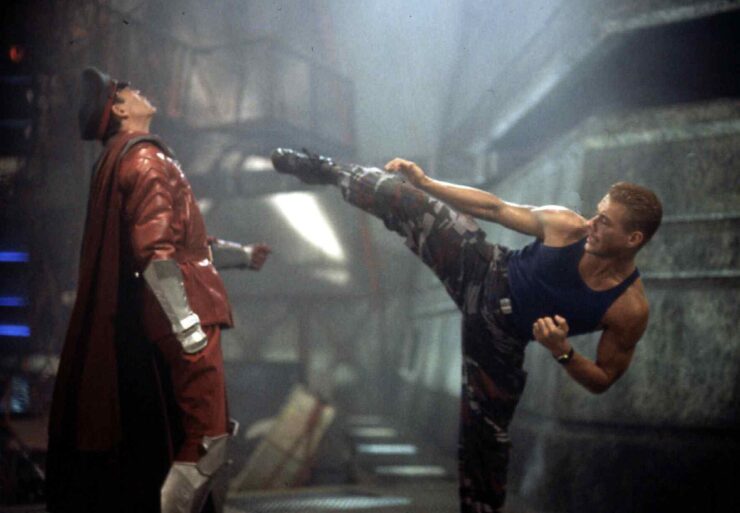 It’s impossible to look at video game movies without talking about Street Fighter. The video game series is one of the most successful video game franchises of all time, in part due to its complex and interconnected story arc. However, it solidified its popularity in the fighting game genre by introducing a variety of new mechanics that were the first of their kind and better than many other fighting games. The combat is balanced between characters, though they all have signature sets of moves. It was one of the first fighting games to allow players to fight as different characters, and face off against well-made computer controlled bosses. It’s a game where fighting is king, and each unique character interacts with every other character differently.

The film took an interesting approach, forgoing the stories told in the games, and instead weaving its own intricate web of character connectivity. It was the last performance of beloved actor Raúl Juliá, who was praised for his performance as the villain General M. Bison. Ultimately, the film was dedicated to action, not wasting a moment before diving right into battle. To match the constant drama of the game, the film turns the drama all the way up and then some! It’s nonstop action and nonstop tension, just like the game. Tomb Raider is a puzzle game that follows Lara Croft, an intelligent and dedicated adventurer who searches the world for powerful and mysterious artifacts. There’s so much exploring to be done, and the game primarily does that with two types of mechanics: platforming and puzzle solving. The platforming mechanic sees you jumping through ancient tombs and temples, using your impressive strength to defeat enemies and survive the dangerous environment. All throughout the game, there are puzzles between interlinking rooms that help you get closer and closer to your ultimate goal: treasure.

The film follows the themes of the game very closely. We follow Lara Croft (played by Angelina Jolie, star of Disney’s Maleficent and Marvel’s Eternals) as she searches for a long lost artifact called The Triangle. She has to find it before the Illuminati, or there’s no telling how they’ll use it. The whole story is riddled with puzzles, mysteries, and plot twists galore. All of it builds to a dizzying crescendo of betrayal and time travel. There’s action and tension all the way through and, in that way, it seems to follow the theme of the games quite well. 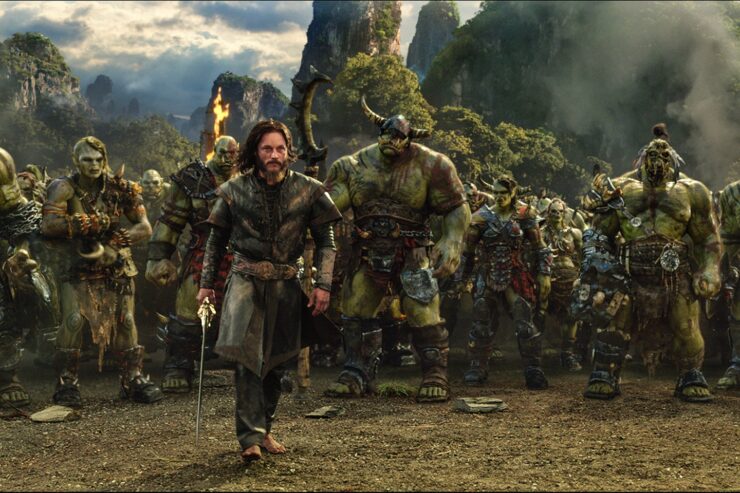 World of Warcraft is a massively multiplayer online role-playing game, otherwise known as a MMORPG — and the word “massive” is an understatement. It would be impossible to truly describe the sheer size and depth of the story world, let alone the complicated mechanics that millions have fallen in love with. There are quests and characters everywhere you turn, relationships that are formed with real-life players and characters. There are monsters to battle, characters to save, cities to explore, and more. With expansions coming out constantly, it’s nearly impossible to experience everything in the game. The player’s experience will always be unique and customizable. There’s no one way to play the game; it’s all about the stories you choose.

When the film Warcraft came out in 2006, it quickly became the highest grossing video game movie of all time. It told the origins of the world and many of the struggles that players experience in the game. Instead of trying to follow a single character through their journey, they stepped back and laid the groundwork for many of the world’s conflicts. Translating a game with an unbelievably customizable format into a singular movie experience is exceedingly difficult, since you’re not designing your own character or exploring the parts of the maps you’re most interested in. They did share multiple perspectives throughout the film, and created sympathetic characters on all sides of the war. They laid the groundwork for people to get more invested in the story, just like an opening to a quest. The Pokémon games are some of the most beloved Nintendo games of all time, reaching popularity that often even surpasses Mario! With a mascot as recognizable and lovable as Pikachu, and games that are constantly telling new stories with new adorable creatures, fans have grown closer and closer to the continuity of the franchise. There are lots of different Pokémon games that each offer different mechanics, not just the classic games where you play as a Pokémon trainer. They all have different gameplay experiences, ranging from photography in Pokémon Snap to mystery solving in Detective Pikachu!

So when the Pokémon Detective Pikachu film premiered in 2019, fans were more than happy to get caught up in the action. The film follows former Pokémon trainer Tim Goodman. When his father disappears, there’s only one detective that can help him crack the case — Pikachu! Inexplicably, Tim can understand Pikachu as if he’s speaking English. Their strange bond helps them get to the bottom of the case. It was the very first live-action Pokémon adaptation, and the second live-action Nintendo film ever created (the first one being Super Mario Bros.) The mystery was alive and well throughout the game and the film.

Ultimately, regardless of the style or genre of video game, condensing an interactive story into a passive viewing experience forces adaptations to engage with their audience in new and unique ways. The way that each filmmaker has innovated in order to bring these complex concepts to life is a testament to our love of cinema and our dedication to stories. The way that you engage with a film is the way that you get the most from it. So plug in, a grab your coins or controllers, and play the game!