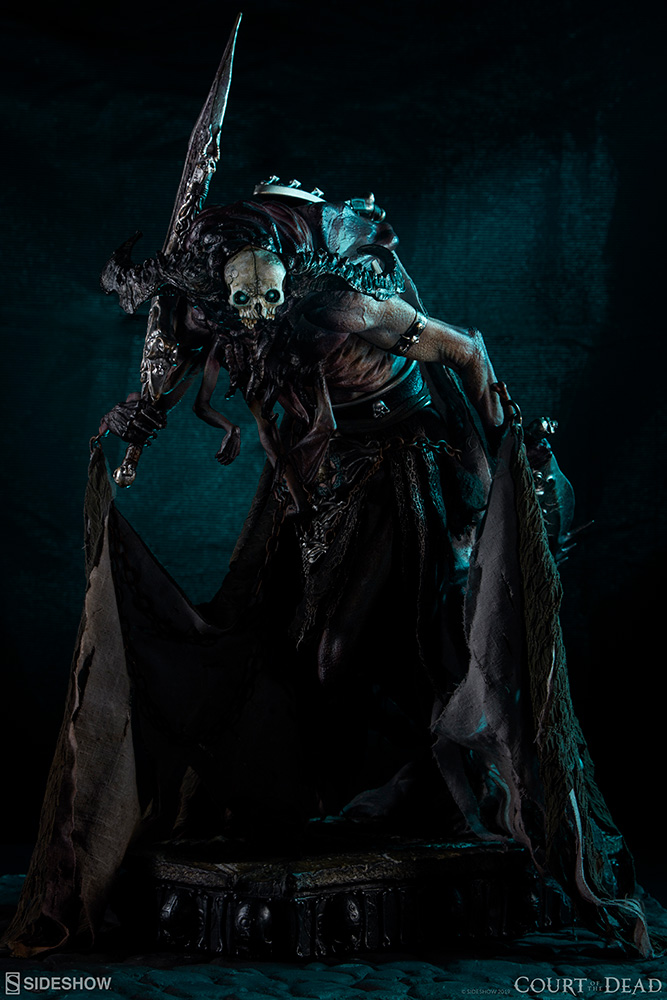 “You cannot run from your fate. No one knows this better than I…” 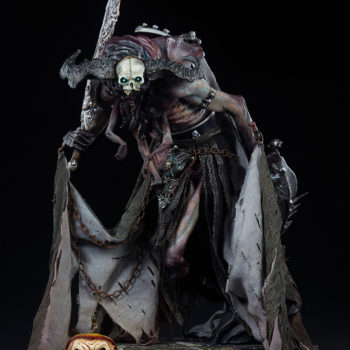 “Since his creation, Oglavaeil has remained one of my favorite Court of the Dead characters, as well as one that’s evolving with the written projects we’ve been pursuing,” said Tom Gilliland, creator of the Court of the Dead. “As his role within the Court has shifted to include wiping out the dreadsgripped raker threats plaguing the Underworld, this has influenced his appearance. I thought it a great opportunity to create [this variant] look for him at this point in Court of the Dead history.” 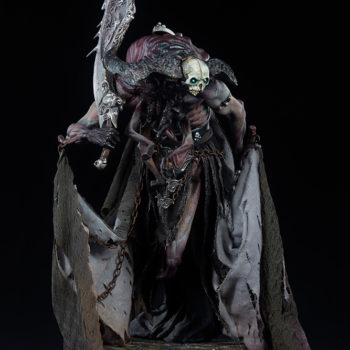 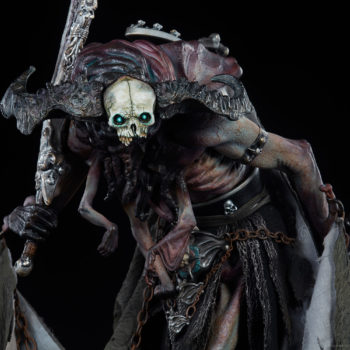 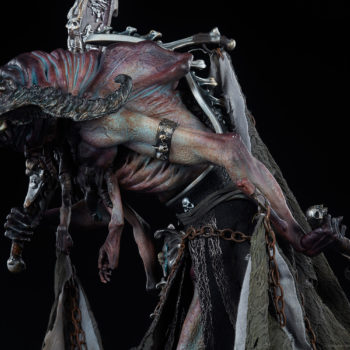 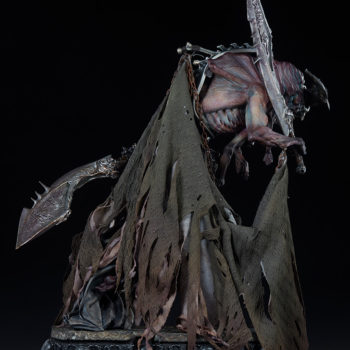 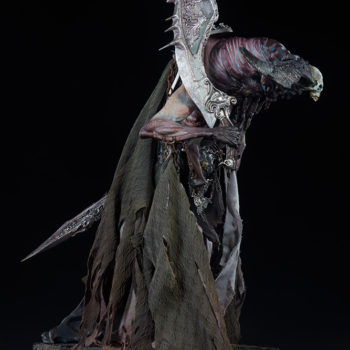 Oglavaeil was created by the Alltaker to uphold justice and maintain balance in the Court of the Dead. Oglavaeil serves as both guardian of the Underworld and as Court executioner. The burden of this duty weighs heavily on this behemoth’s shoulders, as the perverting destructive nature of all mourners – known as the dreadsgrip – is never far from his heart. With every enemy he destroys, Oglavaeil imperils himself.

“In our graphic novels, the dreadsgrip has a distinct dark purple signature; it’s the ‘tell’ of its destructiveness,” said Gilliland, who also painted this figure. “The Dreadsbane Enforcer variant of Oglavaeil visually demonstrates the effects of prolonged interaction with the corrupting influence of the dreadsgrip. I shaded his once-deep etherea blue skin into a sickly pale punctuated by corrupting purple tones.” 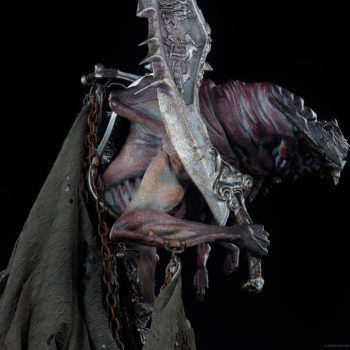 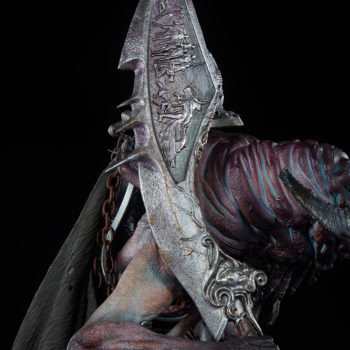 To counter the dreadsgrip threat, Oglavaeil has answered the call to join the Dreadsbane Inquisition, a new Underworld knighthood dedicated to fighting ‘rakers’ that have fallen to serve the dreadsgrip. As the Dreadsbane Enforcer, Oglavaeil is constantly reminded that he must control his dark thirst for destruction, or risk becoming that which he fears most – an enemy of the Alltaker. 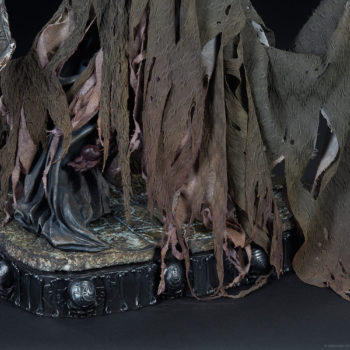 “In this variant, Oglavaeil’s voluminous capes are now tattered streamers. This was intended to further reflect the near-constant strife the Enforcer finds himself in whilst serving the needs of the Dreadsbane Order,” said Gilliland. “I think my favorite detail, though, is that we’ve changed the entire portrait – horns and all – to match designer/sculptor Amilcar Fong’s incredible design for the Oglavaeil bust’s portrait. While I love both takes, the new one reflects a bit more pathos than the last. His helmet with only a single small eye hole to peer through was the best touch. Repentant of his need to destroy, this thin casing of metal serves as a psychological barrier to his growing guilt over what he must do to.” 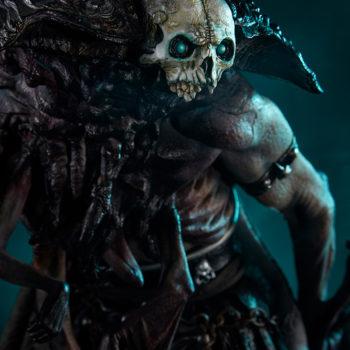 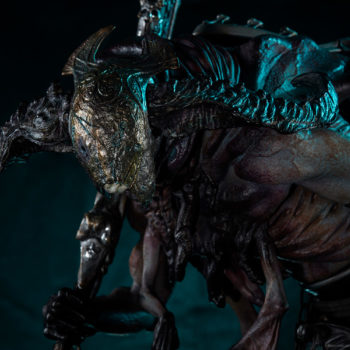 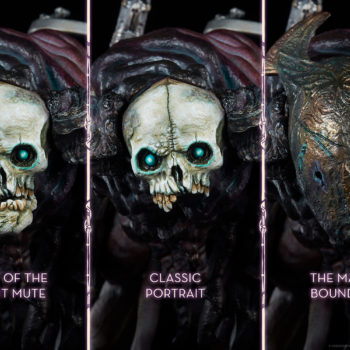 Can you walk the line between creation and destruction? Can you carry the dark burden, but not succumb to its siren song? Add the Oglavaeil: Dreadsbane Enforcer Premium Format™ Variant Figure to your collection as a stunning and haunting reminder of the dark thirst in all mourners’ hearts. 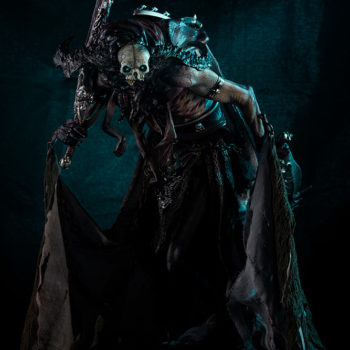 Pre-orders for the Oglavaeil: Dreadsbane Enforcer Premium Format™ Variant Figure will begin on Thursday, August 8th between 12pm-3pm PDT and the figure will be priced at $650.00 USD.