It’s all just a bunch of smoke and mirrors … until it isn’t. Based on Mysterio’s unsettling illusions from Spider-Man: Far From Home, the Mysterio’s Iron Man Illusion Sixth Scale Collectible Figure recreates the nightmarish vision of Iron Man that Mysterio uses to terrorize Spider-Man. Heavily weathered and corroded metallic armor, covered with scratches and rust, captures the ultra-detailed horror of Quentin Beck’s mind games. The figure’s armor includes a newly developed damaged helmet (with LED light-up function), as well as light-up LEDs on the hands and the arc reactor. Beneath the suit, strategically placed exposed wire add chilling drama to the figure’s twisted portrayal of Iron Man from beyond the grave.

In addition, the elaborate diorama display base also includes an LED light-up function, as well as additional pixelated effects and a drone with green smoke effect, so that Spider-Man and Mysterio’s battle scene can replay in your collection over and over again. After the events of Avengers: Endgame, everyone is still mourning their losses — including Peter Parker for his former mentor, Tony Stark. Quentin Beck, AKA Mysterio, preys on Peter’s grief. Using his powers of illusion and crippling mind games, he taps into Peter’s greatest fear: putting the people he loves in danger.

Among visions of his past selves and MJ in danger, Mysterio drops Spider-Man into a dismal graveyard. Right in front of him is the tombstone of Tony Stark. Suddenly, a decaying Iron Man suit rises up from the ground, with Tony’s rotted skull poking through. Spider-Man tries his best to deal with Mysterio’s illusions but this one hits home the hardest. 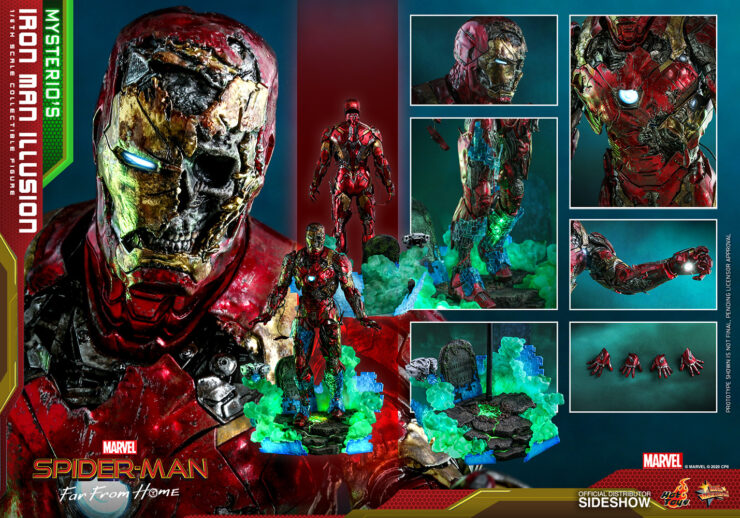 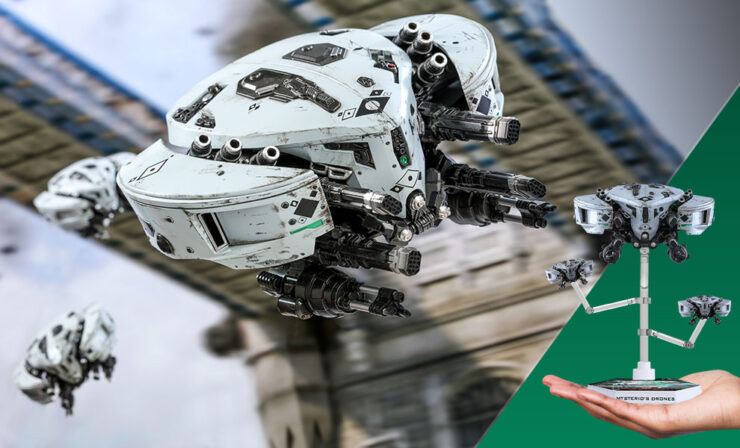 Mysterio’s true power comes from his ability to merge technology with psychology. His illusions bring true terror to their victims, making them question whether they can trust their own eyes. And in the battle against Spider-Man, this super-villain will need all the illusions he can muster up. That’s why the Mysterio’s Drones Sixth Scale Accessories Collectible Set adds an extra layer of mind-melding technology to your collection — the more drones Mysterio has, the better his chances are to finally gain his revenge. 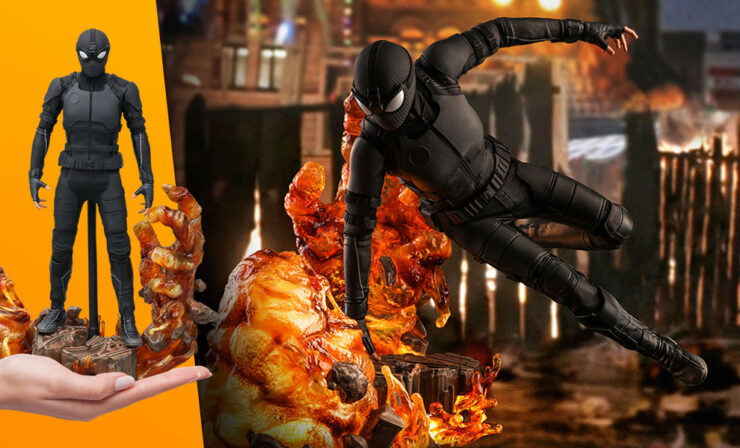 When Spider-Man is recruited by Nick Fury, he gives the hero this sleek new suit. A departure from his usual bright colors, Spider-Man is ready to investigate the mysterious series of attacks plaguing Europe in the Spider-Man (Stealth Suit) Deluxe Version Sixth Scale Figure. Complete your Spider-Man: Far From Home set with this collectible figure, available now!

Are you adding the Mysterio’s Iron Man Illusion Sixth Scale Figure by Hot Toys to your Marvel collection? Let us know over at side.show/geekgroup, and don’t forget to Let Your Geek Sideshow!