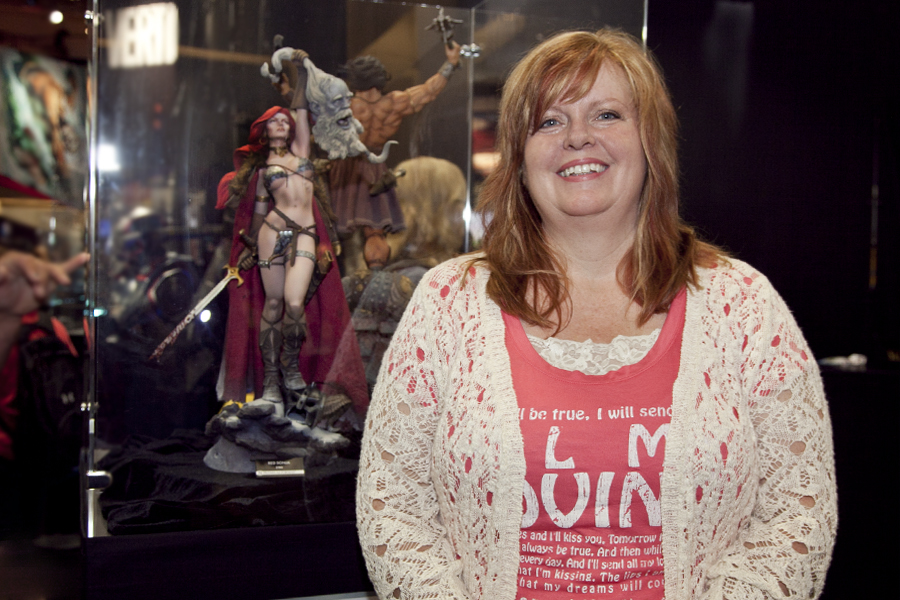 When it comes to women in comics with fiery red hair and an attitude to match, Red Sonja and Gail Simone need no introduction, blazing onto the scene last year during San Diego Comic-Con with an array of exciting new titles from Dynamite Entertainment.

We caught up with Simone recently to talk about the She-Devil with a Sword, and give away an amazing Red Sonja prize pack sponsored by Sideshow and Dynamite Entertainment!

First off, thanks for taking the time to chat with us! Can you tell us about how you fell in love with writing Sonja, and where her adventures have taken you so far?

Red Sonja had always been a character I’ve liked, but her stories had not always matched her potential for me. I wanted to portray her not as an ice queen, but as a hot-blooded, lusty, hard-drinking warrior. She isn’t polite, she isn’t refined, she’s not a pin-up or a prize to be won. Initially I took the Red Sonja assignment for six issues. I love the character, love sword and sorcery stories, I thought it would be a hoot.

Well, it turned out to be more fun than I could ever have hoped for, so I extended my run for six more issues. I agreed to do Red Sonja #0. I spearheaded, co-wrote and edited five issues of LEGENDS OF RED SONJA with some of the biggest names in fiction. I am writing CONAN VS. RED SONJA with co-writer Jim Zubkavich. And I’m writing a huge crossover book with Sonja as the star, WOMEN OF DYNAMITE. On top of that, I’ve agreed to do six additional issues. It’s safe to say I fell in love with the She-Devil because I can’t seem to let go!

What has it been like working with Dynamite Entertainment? We heard you’ve been able to take some really cool creative directions with the character…

I’ve never had a company so eagerly embrace change and new ideas, they’ve been amazing. When Dynamite Entertainment asked me to do the book, I said, “Hey, wouldn’t it be cool to have all the covers and variant covers done by women?” Never thinking it would happen.

The next DAY they wrote me back and asked for a wish list, and then proceeded to get every single name on it. I mean, the first issue alone had Nicola Scott, Amanda Conner, Fiona Staples, Jenny Frison, Stephanie Buscema and Colleen Doran all doing covers. That is ridiculous, it’s just astounding.

A few months later, they wanted me to write something for Sonja’s anniversary, and I said, “Hey! Wouldn’t it be cool if we had an anthology of short stories, all written by the biggest female names in comics and fiction?” and again, the next day, it’s approved, and we have Tamora Pierce, Mercedes Lackey, Kelly Sue DeConnick, Marjorie M. Liu, and lots more. It was just the coolest thing I’ve ever experienced.

And we’re not done, we’re bring some more of the best of my creative friends for a new project with Sonja, I can’t say much about yet. But these guys are really doing great things, I’m thrilled to be part of it. 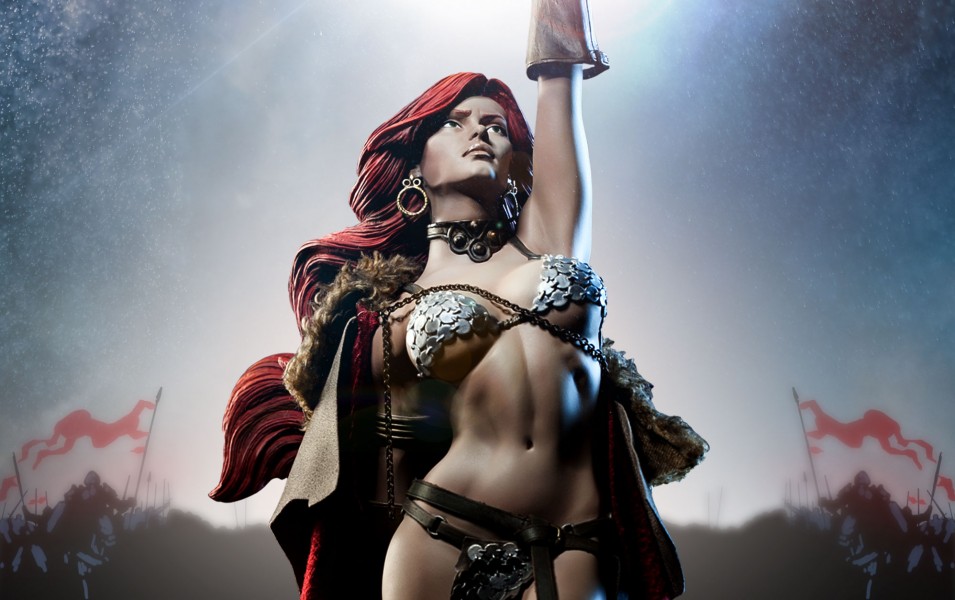 What was your first reaction when you saw Sideshow’s Red Sonja debut last year at Comic-Con?

It’s a funny thing, San Diego Comic-Con is an event I have been attending for ten years, but it’s been many years since I have ever actually been able to really SEE the con. The one exception, every year, is the Sideshow booth. I always make a point to sneak away and go look at the gorgeous pieces on display there!

Last year, I heard there was a Red Sonja statue on display and people kept telling me I HAD to go see it, and so finally I got a chance to sneak over and it just took my breath away. I feel it’s the Sonja I am writing about, she’s gorgeous, but she’s also this dangerous, dangerous fighter. It’s a beautiful piece and I’m stunned at Sideshow’s artistry.

Ok, now for the really exciting part! Would you like to help us introduce the contest?

I’m so excited for this contest, to give away a whole collection with the statue, my Sonja book and variants. The first arc is a very emotional one for Sonja, as she is forced by someone she loved to do something she never thought she would do – surrender. It’s very dark at times, it really examines Sonja’s soul, but it’s also got humor and gorgeous art by Walter Geovani. It’s one of the books I am most proud of in my whole career. Those along with Sideshow’s statue, I just hope it makes someone out there ridiculously happy!