Go Beyond the Veil With the Newest Court of the Dead Animation: Tasked by Fate

Mourners, take heed! There is a brand new animation for Court of the Dead fans to feast their eye sockets upon, all about the Alltaker and his righteous mission.

Check out Court of the Dead: Tasked by Fate below, then read on to find out how this incredible animation came to (after)life.

The Alltaker is a benevolent master of collusion, one so adept at his practice that not one but two powerful kingdoms remain ignorant of his machinations.

Slowly, carefully, the Alltaker plots his rebellion to end the war between Heaven and Hell. All the while, our Dark Shepherd cultivates the spirits and souls that find refuge in the Underworld, emboldening them in preparation for their time to RISE.


Tasked by Fate illustrates the Alltaker’s dark purpose with a bald-faced clarity previously concealed from the Mortal Realm. From the breathtaking artwork to the effortless editing and animating, the three-minute video is a rousing tale of the surreptitious affairs reaped by defiance towards cruelty.

The Court of the Dead team is fortunate to work with a multitude of talented in-house multimedia and illustration aficionados. Tasked by Fate was plotted by Tom Gilliland, written by Jacob Murray, directed by Stephen Lubin, illustrated by Ivan Koritarev, and animated and edited by Michael Lubin and Eamon Stewart – among others.

“We wanted to dig a little deeper into what our last animation talked about, where Malavestros explains the relationship of Heaven and Hell,” said Stephen. “This piece on Death is the next stepping stone to understanding the macro story.” 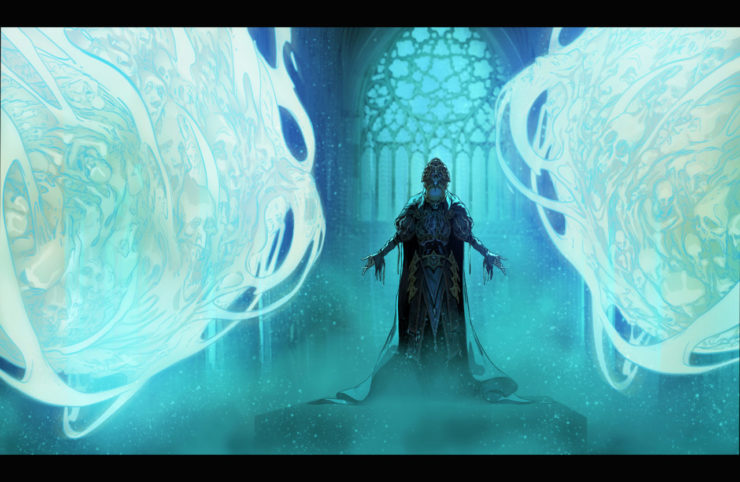 Since the Court’s success first became apparent, the multimedia team knew they’d be creating animation focused on the Alltaker. “After doing the Malavestros project [One Corrupt Coin], we knew we wanted to further the storytelling about the Underworld (in this case, Death) interacting with Heaven and Hell,” Stephen explained.

While early development is handled largely by Tom Gilliland, CCO of Sideshow and creator of the Court of the Dead, the entire multimedia team helps brings his vision to life. “Tom still gives us a ton of creative freedom, which is amazing for any artist,” said Michael, a devoted disciple of the Spirit Faction.

Replete with talented, ambitious producers, the multimedia team had several goals for this project. Aside from producing an engaging animation that would further the lore of the Court of the Dead, the team aimed “to experiment with different composting techniques, blending unique layering, 3D assets, and puppet animation,” said Eamon, another adherent to the Spirit Faction. “It’s also always a goal to complement the great art we get from Ivan, as well as our other great artists that work on the Court of the Dead, with cool motion and dramatic editing.”

Of course, as with any video bursting in vivid piquancy, it is important to manage the flow of the narrative whilst retaining audience attention. “I was in charge of editing and special effects, so my goal, as with any project, is to create an immersive experience,” said Michael. “They say the best editing is one you don’t notice. And it’s true because that means you get lost in the story.” 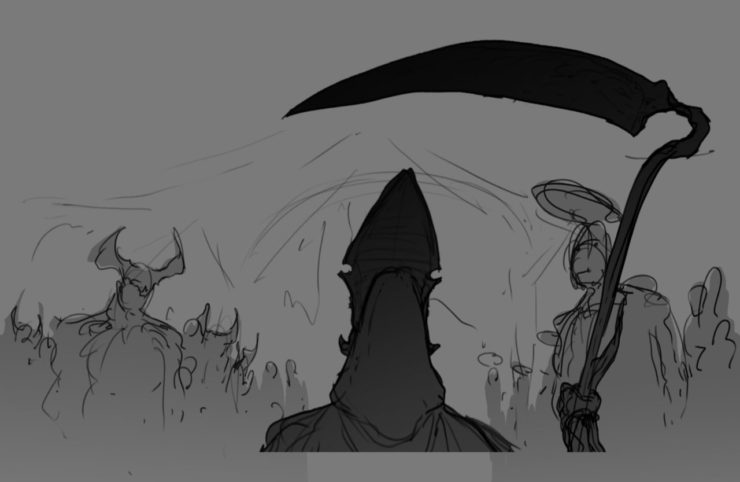 Developing any animated video includes writing a script, storyboarding the animation, drawing the final frames, editing the video, recording voice overlay, sound mixing, choosing music, and more. From beginning to end, development can take several months. “We are juggling a multitude of other projects, so 100% of the attention can’t be on a single project,” said Stephen. This reality makes their fine attention to detail all the more impressive.

For Ivan, the artist behind the amazing illustrations seen throughout the video, the work begins at the end of the script, and ends at the start of animation. “Once I was given the script, I storyboarded the clip and did a quick style try for the final look of one of the frames,” said Ivan. “It was approved, and it was off to the races to get it all finished!”

Finishing all new artwork for an animated video isn’t anything new to Ivan, however. Delivering his work from his home town in Bulgaria, Ivan has been illustrating for the Court of the Dead for six years now. His first project for animation was the Red Death Motion Comic, published in 2014. “By now, we have a somewhat established look on the art I do for Court of the Dead,” Ivan continued. “Normally, when working on animation, it’s better to have the style a bit simpler and plainer, so it’ll be easier to animate; with less detail there is a quicker drawing process. The way this was animated, however, allowed me to have it a bit heavier on details.” 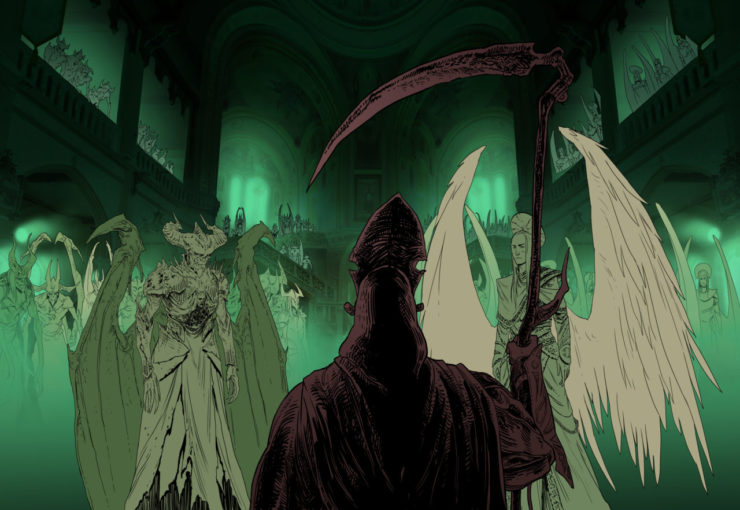 “On the Multimedia Department’s end, we’re usually handed a script and storyboards, or requested to produce storyboards,” said Eamon. “From there, we lock down voice talent, research animation software and plugins to execute certain sequences, and produce an animatic (or, an animated storyboard video with music, rough voice over, and sound effects) to get a clear idea of the duration of each scene. The animatic also serves as an overall reference of the project.”

Development of an animatic is a crucial element to film production. It helps to keep voice over and scene timing on track. “The most important thing is getting the voice-over recorded and putting music to it to get a sense of timing,” said Stephen. “From there, we start layering images over it (without animation) to get a feel for the pacing.” Unfortunately, there is almost always a need for some necessary tweaking to the editing and animation.

“It’s kind of a dance between the two, as production happens,” said Michael. “[You’re] not necessarily finishing one entirely before moving on to the next; it’s almost always happening simultaneously.” Undoubtedly, Gethsemoni, resident expert Necromancer, knows a little something about the “dance” one must do to successfully conjure up a new creation! 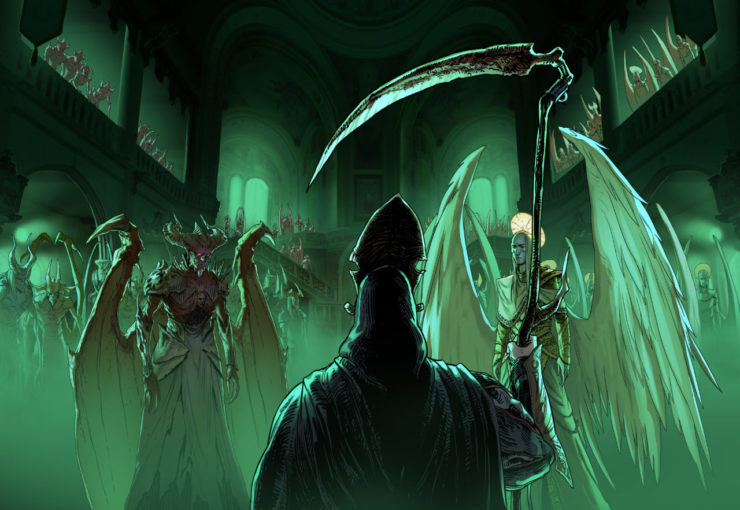 Matching voice-over to animation is such a delicate process that it even sometimes requires full lip-syncing. “In the previous Court of the Dead animation, ‘One Corrupt Coin,’ there are many individual drawings with mouth shapes that we use to sync the image to the audio track,” said Eamon. “Sometimes, even near the end of production, lines of dialogue may change after several rounds of review. At that point, we adjust the music and the duration of the shots to accommodate those changes.”

“For this piece,” said Stephen, “we ended up cutting a lot of dialogue to pick the pacing up and it really helped make the delivery of the story a lot cleaner.” The team was forced to cut a few of the storyboards drawn by Ivan  out as well, all in an effort to truncate the video and keep the pacing up.

“We try to keep the integrity of Ivan’s original artwork, but with most shots, we cut them up and add 3D depth to them so that they don’t feel flat with dynamic camera movements,” said Eamon. “When that happens, some pieces of the art can be cropped in a way that wasn’t originally intended, so we adjust from there.” 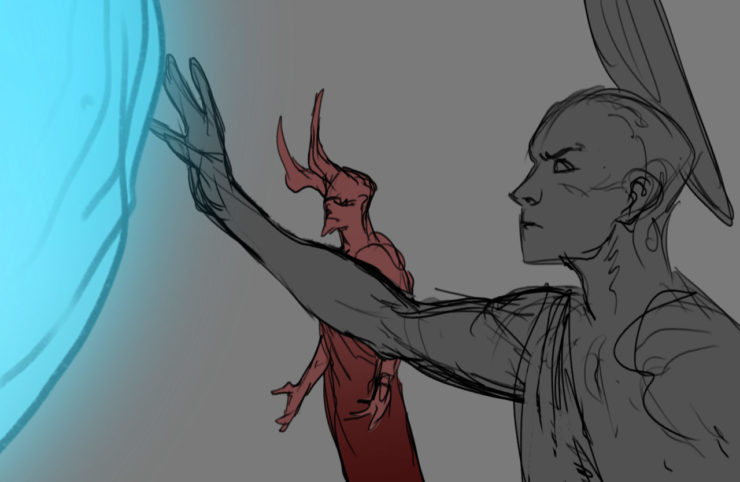 Solving artwork and pacing issues were, unfortunately, not the only issues to fix. “The other challenge was finding Death’s voice,” said Stephen. “John Bentley, who voiced Death, went through a lot of different iterations with Tom Gilliland and [I]. Tom had a really clear vision for how Death should sound, and once John found that voice, it was smooth sailing.”

As for where the team would like to take Court of the Dead’s animated story telling next? There are truly no limits in the Underworld. “I’d really like to do some animations on the faction leaders,” said Stephen. “There’s a lot to tell there!” Michael, on the other hand, would like to feature Demithyle, the Reaper General.

For Ivan, opportunities for animations abound, ranging from Demithyle and Oglavaeil to Cleopsis and Shard. “They are all so cool, I’d like to have a chance to draw stories with all of them,” said Ivan.

“These Court of the Dead character narrative videos are really fun to create,” said Eamon. “I also enjoy creating assets for documentaries, especially our Sideshow Artist Profiles and Inside Looks.” 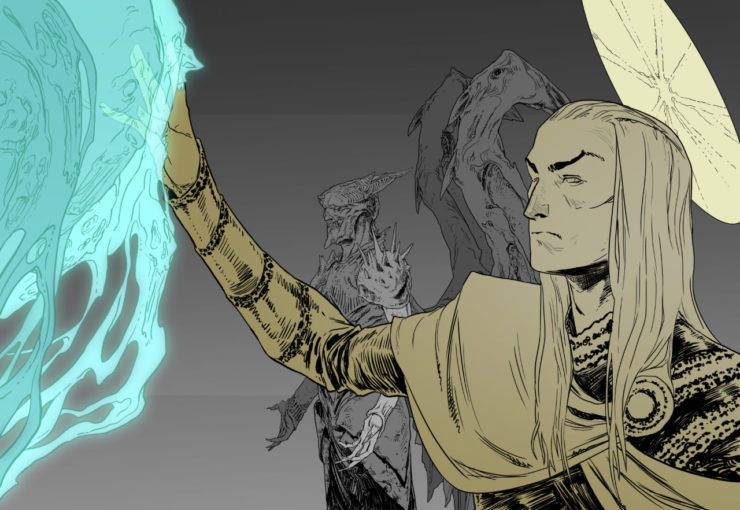 Hopefully the future of Court of the Dead animations and other exciting videos is looking as bright and ripe to mourners everywhere as the Dark Shepherd’s covert sanctum is looking enigmatic and compliant to celestials high and low. You can add to your crypt of Court of the Dead collectibles and support your faction champions while Death gathers his trusted allies in the darkness. 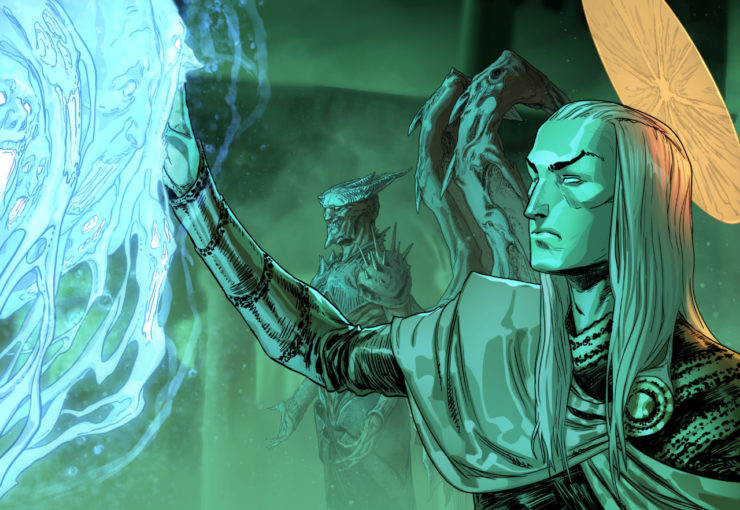 Death Death: Master of the Underworld Court of the Dead