Harley Quinn is back, %^&#@*$! After the Wedding That Literally Nobody Wanted to Happen in season 2 (besides maybe Kite-Man), Harley and Poison Ivy set off into the sunset for a road trip together. Season 3 of Harley Quinn: The Animated Series returns to HBO Max on July 28.

In between the season 2 finale and season 3, DC Comics released six issues of Harley Quinn: The Animated Series: The Eat. Bang! Kill. Tour. Written by Tee Franklin with art by Max Sarin, these comic books fill in the blanks about Harlivy’s road trip and all the misadventures they share with Catwoman, Nightwing, Vixen, and plenty of others! Here’s your recap of all six issues to prepare you for season 3 of this iconic DC queer couple’s blooming relationship. 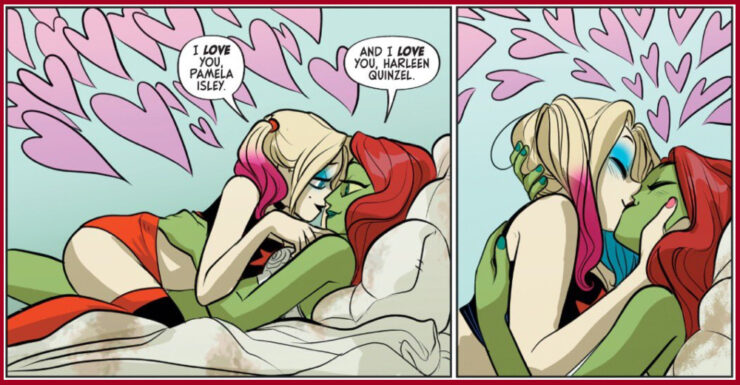 The first issue of the series picks up right where the finale of season 2 left off — Harley and Ivy are on the run from the Gotham City Police Department, with Commissioner Gordon in hot pursuit. Thanks to some spontaneous road obstructions from Ivy, the couple is able to escape the GCPD temporarily. Their next move? Stay on the run by way of a Road Trip Honeymoon! How romantic! Except Ivy is still struggling with her runaway bride guilt as well as letting Harley in on how she’s feeling. 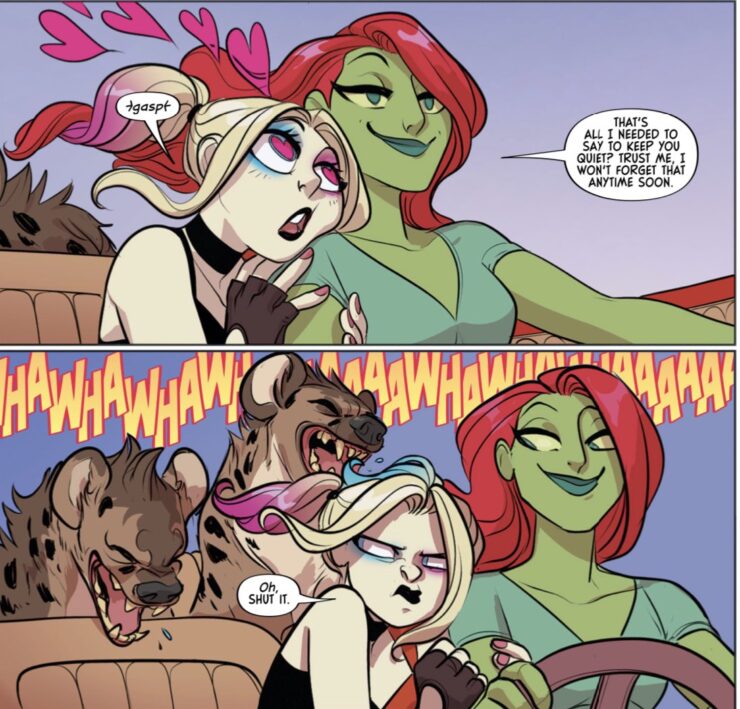 Harley has a genius idea: Hit up Catwoman for a new hideout! Once they arrive though, it’s not long before Gordon bumbles his way onto the scene and forces the trio to cut loose. Ivy continues to have a short fuse with Harley, yelling at her about boundaries while clearly having a hard time with her own. Batman swoops in to stop Gordon from making any drastic moves (the man thought using a grenade was smart), Selina Kyle decides she’s had enough of Harlivy, and our fave pair hightails it outta Gotham. 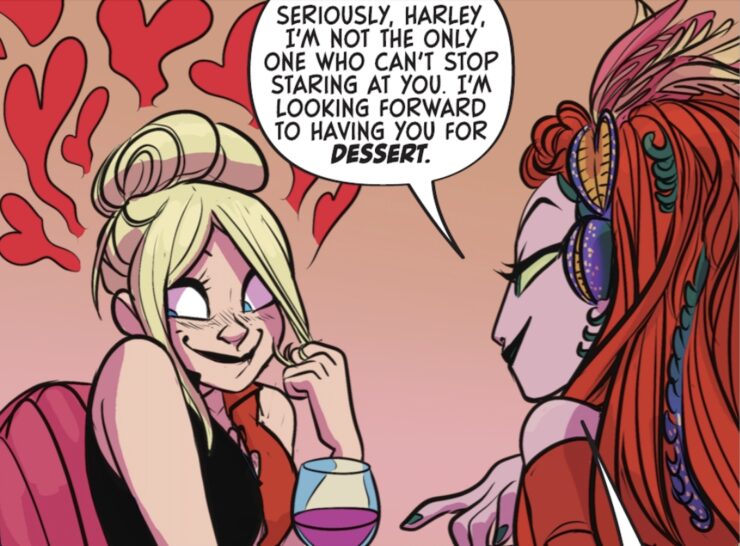 It’s Date Night! Harley and Ivy are out on the town and dressed to kill. And when Hush shows up, they just might have to kill somebody — unless, of course, Gordon has his way. The commissioner catches up with Harlivy but fortunately Nightwing and Batgirl confront Gordon and his bumbling ways so that the honeymooners can escape. Even Hush can’t bring them down when Harley and Ivy are on a roll! But somebody else seems to be lurking in the shadows… 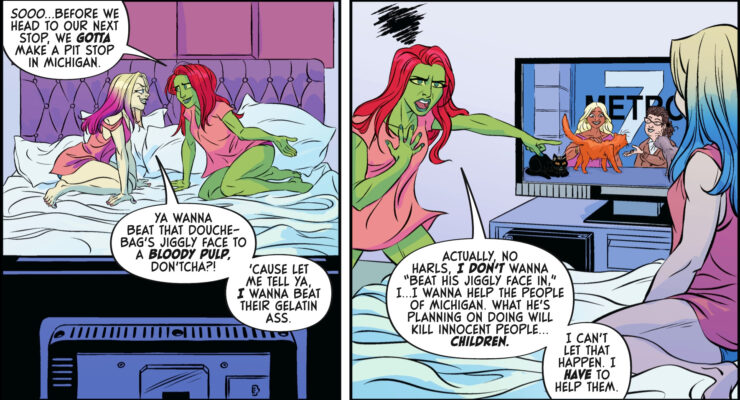 Once Harley and Ivy arrive in Blüdhaven, they finally get to enjoy some authentic honeymoon action. Later, as they dig in on some room service, a news broadcast shows Vixen, Zatanna, and Cyborg fighting a new toxic villain called Mephitic. The Justice League trio is quickly defeated and Mephitic reveals a plan to take over New Michigan, while also calling out Poison Ivy as an inferior villain.

Ivy takes the bait, but only because she’s starting to really feel bad about all the damage she’s caused. She and Harley also keep clashing, but Harley makes it up to Ivy by finding her some corrupt CEOs to poison at dinner. After their dine and dash, Vixen returns to accuse them of working with Mephitic and Gordon figures out they’re in Detroit now. 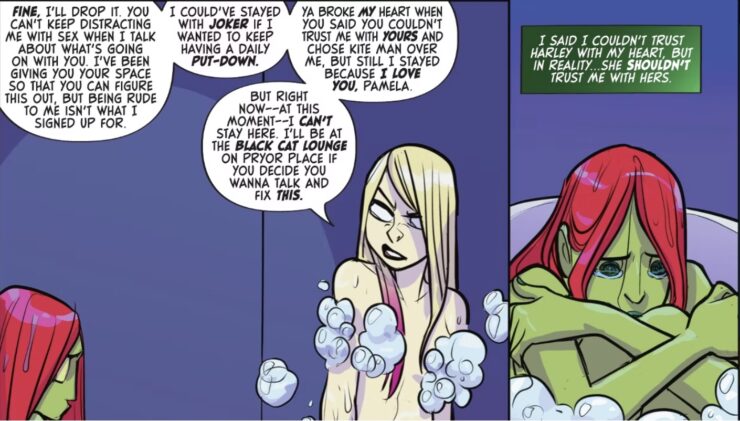 Tensions finally come to a boil between Harley and Ivy. Harley goes out to give Ivy some space while Ivy comes to terms with her own unresolved trauma (with a little help from Dungeon Master Harley and Frank). Meanwhile, Harley is ambushed by Mephitic at the club and Ivy arrives too late to save her. Ivy is left with no choice but to call on Vixen for some help. 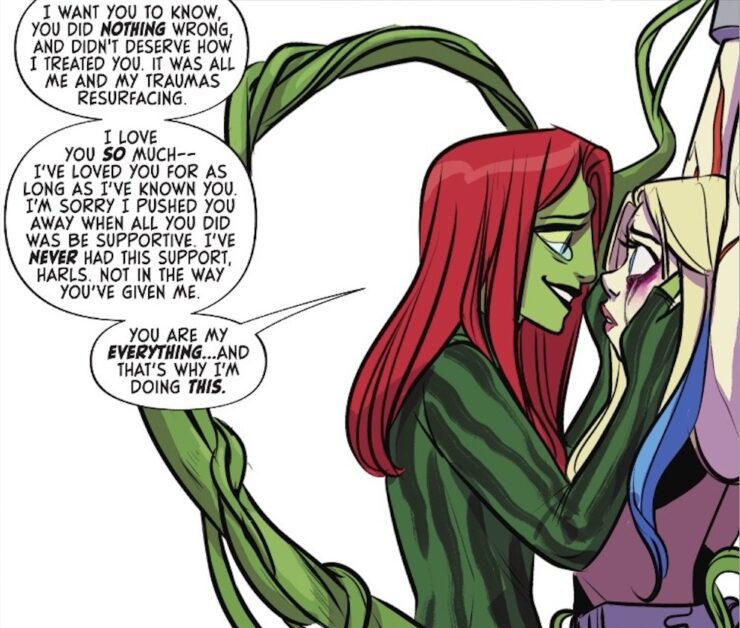 Ivy shows up at Vixen’s place to beg for help, and Vixen’s girlfriend Elle helps convince the hero that Ivy can be trusted. Just as Mephitic’s poisons are about to push Harley toward her wisecracking doom, Ivy blasts open the building with an army of dandelions and backup from Vixen, Livewire, Zatanna. Together, they defeat Mephitic (turns out the villain just really needed a strong bath) and Harlivy slips through the cracks again, avoiding Gordon and affirming their love.

Season 3 of Harley Quinn: The Animated Series premieres July 28. As Harley and Ivy continue to grow with each other, we’ll see them team up with Batgirl plus deal with Ivy’s plan to give Gotham a green makeover. All aboard as the Journey to Love continues!

What do you hope happens in season 3? Keep the conversation going over at side.show/geekgroup with other Harlivy fans, and don’t forget to Let Your Geek Sideshow!