Here Are Some of Spider-Man’s Many New Suit Abilities

Last April, Captain America: Civil War presented audiences with the third iteration of live-action Spider-Man in under two decades, only this time something was different. This time the Web-Slinger was a part of the much larger Marvel Cinematic Universe.

The biggest gain (so far) from this new MCU association is the fact that Tony Stark will be a major character in Spider-Man:  Homecoming serving as a mentor of sorts, and providing him with some new high-tech gear and spider suit, which appears to be a significant part of the story, with the second trailer revealing that Tony demands Peter return the suit when he disapproves of Peters’ decision making.

We already saw the holographic interface that comes out of his wrist in Civil War, but the upgrades go far beyond that. In addition, the suit also has a built in AI that talks to Peter in a similar manner as J.A.R.V.I.S. (now F.R.I.D.A.Y.) does in Tony’s Iron Man armor. 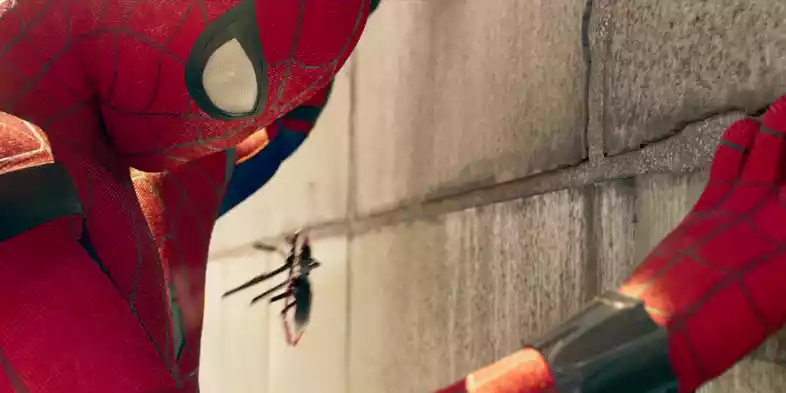 In order to develop this fresh cinematic take on the character, Spider-Man: Homecoming’s creative team combed through decades of Spider-Man comics to specifically take note of the many different abilities he’s utilized, hoping to incorporate as many as possible. During a set visit last August, Screenrant got the chance to talk to Homecoming’s co-producer Eric Carroll about the many fancy new features in the Wall-Crawler’s Stark approved suit.

Focusing specifically on his web shooters, Carroll revealed that these aren’t the simple mechanical shooters crafted by Andrew Garfield’s Parker, and most definitely not the organic shooters found on Tobey Maguire. These shooters are specifically related to the hologram device shown in the Civil War post-credits scene.

Is that… so the stinger in Civil War, where the hologram on the ceiling. What is that? Is that going to play into this? Is that how he is contacting Happy [Hogan]?

Eric Carroll: No, no. He just calls him. When he tries to contact him, he calls on his three-year-old cell phone that he has, with a cracked screen and stuff. That is sort of the interface for the web shooters. So even before he deactivates the Training Wheels Protocol, he’s got a really high-tech web shooter. And one of the ideas is that when he does this [movement] he can adjust the spray, and he can even scroll through different web settings, like spinning web, web ball, ricochet web… you know, all of the stuff we can see him do in the comics, Tony has built into this. That was sort of unlocked for him. So when he shines that, it will go [boom noise], and if he wants to shoot just the one swinging web, it will go down really small. And if he wants to web a guy to the wall, it goes [makes noise] and goes like that. It’s kind of like a DSLR camera. He can shoot without it, or he can hold that thing a second, get his aiming right, and really choose a web to shoot.

The “Training Wheels Protocol” is one of the more interesting aspects of this new Stark technology. We already know Tony in Spider-Man: Homecoming is basically a “new version” of the character due to the events of Civil War, so the idea of him being overly protective of Peter and programming his suit to lock certain features until the boy has proved himself makes a lot of sense. 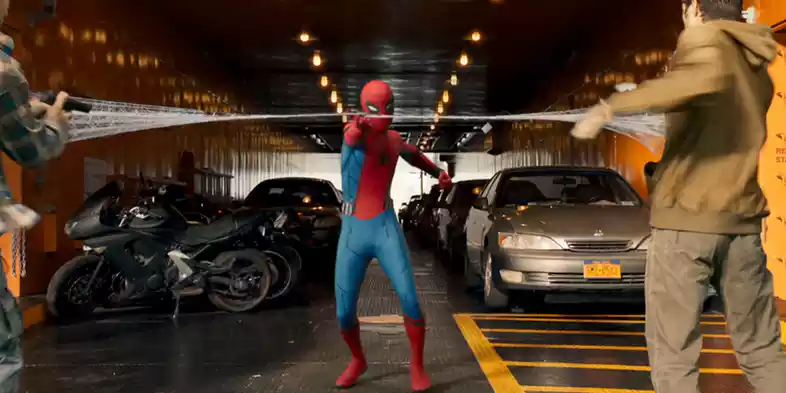 We’ve already seen some of these DLC-esque features on Spider-Man’s suit in the trailers, specifically the “Spider-Tracer” that comes out of the suit’s chest piece, but Carroll expands on that, detailing additional unlock-able abilities.

With the suit unlocked, can you talk about some of the other abilities and features?

Eric Carroll: Sure. He figures out it has a heater, which might have come in handy in the other ones. He finds out that it lights up. At an inopportune time, he finds that out. At one point, there’s… the Spider logo on his chest goes [makes motion with hands] and floats off and starts giving him surveillance data, and he’s like, ‘What?’ In fact, that startles him when it happens because he didn’t even know that would happen. … Long story short, we tried to look through the comics and pull out all of the sort of fun and wacky things that Steve [Ditko] did, which seemed even harder to explain when he built it in his own bedroom. So, like, there’s an air bag at one point. What else? There are different sorts of webs that he can unlock, too. He has one that can sort of taze people. One that shoots multiple webs at the same time out of one wrist – like, it shoots in two or three different directions. 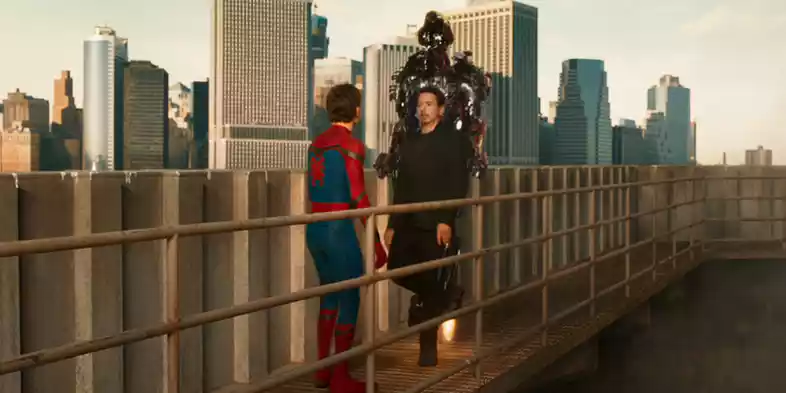 While Eric Carroll helped plan all the suit’s functionality, it was Tom Holland that actually had to embody the young Web-Head. During our interview with  Holland, we also got to ask him about his thoughts on all the fancy new gadgets.

What’s your favorite new gizmo that the spidey suit has?

Tom Holland: My favorite gizmo that the suit has… there’s a very funny sequence in the movie because of something he can do with his vision in the suit… he can sort of alter what he sees and how he sees things, and it’s really funny to see. It’s almost like the first time you play a video game and the controls are all funny, and it’s really funny seeing him look like a badass, but inside panic and not know what to do. So without giving anything away, that.

Based on the trailers, Peter won’t have access to these more advanced abilities for a chunk of the movie, since his home made suit is prominently featured, so it’ll definitely be interesting to see how this is handled in the movie, likely manifesting as a demand for Peter to learn how to win without relying on technology, a lesson we had to see Tony Stark learn in Iron Man 3.

This article originally appeared on Screenrant: Here Are Some of Spider-Man’s Many New Suit Abilities