Over the years, many famous characters have jumped from the comics to movies. And now, some of our favorite movie characters are being turned into games.

However, some of the newest, most exciting Marvel characters actually come from games first, and are now making their way into comics. Before long, we might even see them in the movies! Who knows? Anything is possible in the incredible Marvel Universe.

If you haven’t had a chance to meet these exciting virtual heroes yet, here are some of the greatest characters whose popularity sprouted from mobile gaming titles from Marvel Games. 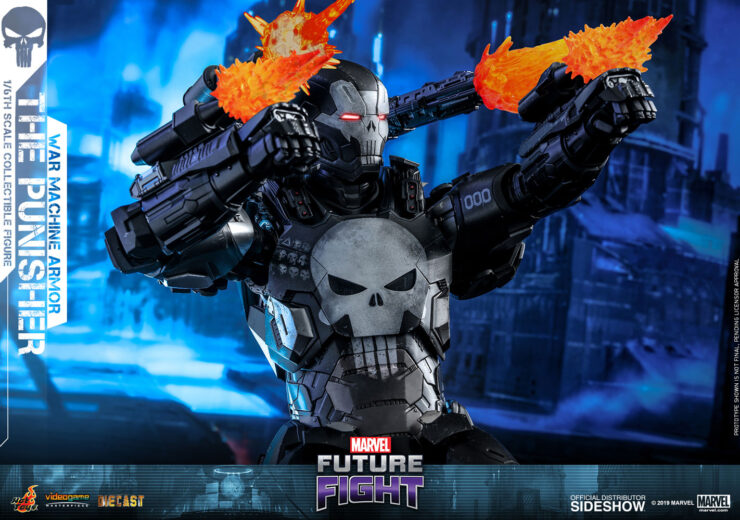 The Punisher War Machine Armor shows up first in MARVEL Future Fight. He’s an aggressive character, and the armor is a very cool uniform upgrade for Frank Castle. It is largely a standard Stark-issue War Machine suit, but Castle’s signature death’s head skull is emblazoned on the chest and mask, giving him an awesome and terrifying new look.

This version of the character only became more beloved once it was brought into the present with the Punisher: War Machine series from Marvel Comics. In this story, Frank Castle continues to take out the villains of New York one bullet at a time when Nick Fury Jr. calls him into a meeting. The Punisher wants nothing to do with Fury, since he doesn’t want to be controlled by SHIELD, the government, or anyone for that matter. And yet, Fury knows exactly how to pull on his heart strings: kids. Castle will never sit by and watch children be mistreated, so he agrees to work with Fury for this mission.

Some rogue SHIELD agents absconded with upgraded War Machine suits and started working for an international government to impose brutality, but Castle suits up in The Punisher War Machine Armor and takes them all down one at a time.

If you thought he was tough enough already, this suit makes him even deadlier than before. With shoulder-mounted cannons, Castle’s own military expertise, and his devastating moral code, The Punisher as War Machine is practically unstoppable. 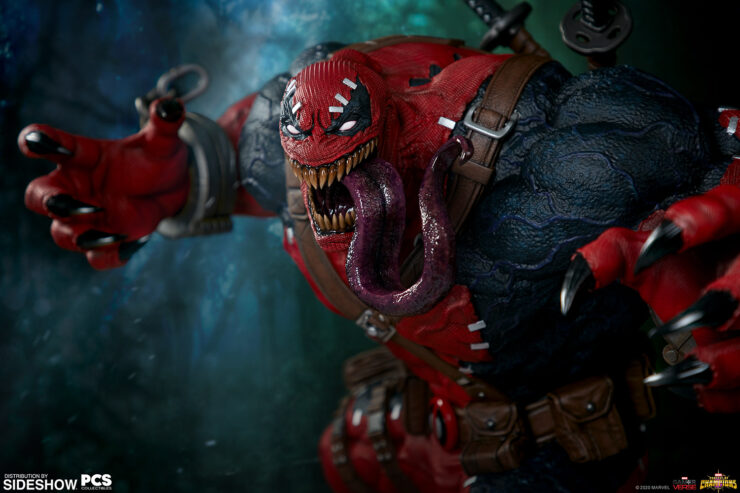 Venompool was introduced in the comics quite a while back, canonically before Venom even merged with Eddie Brock. It’s theorized that Deadpool drove Venom just a little bit crazy, and that Deadpool’s broken psyche still affects the symbiote to this day. The series was short lived, mostly spawned out of the “What If?” alternate universe adventures, but the character was well loved when he came back for Marvel Contest of Champions.

In Marvel Contest of Champions, Venompool got completely revamped. His new design became an instant classic. He pulled from elements of both Deadpool and Venom in both style and animation to become a monstrous mixture of regenerating degenerate and sinister symbiote. He’s got a mixture of their moves and even when he’s holding someone upside down by a dangling Venom tendril, he makes sure to stop for a selfie!

Kill Spider-Man, eat chimichangas, and more! All of this madness tumbling around in the terrifying mind of the Merc With an Extremely Large Mouth. 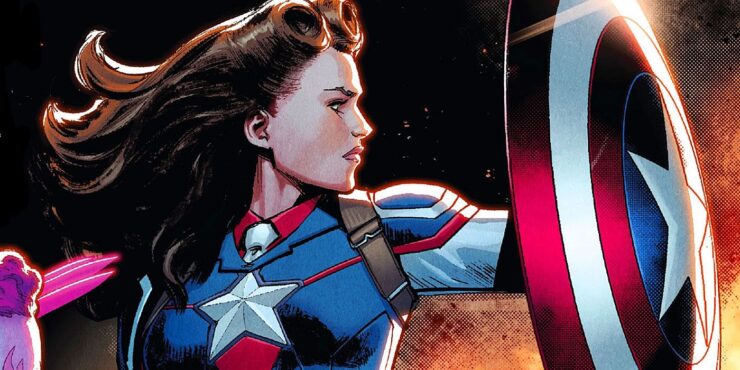 In an alternate timeline where Steve Rogers was killed before he could join the Super Soldier Program, Peggy Carter stepped up to the plate and became Captain America. We see her precision and power in Marvel Puzzle Quest, where she doles out deafening blows to her opponents with moves like Ultimate Soldier and Legendary Presence. Even her name alone cause fear and panic with her Do As Peggy Says ability. And that’s just in the color-matching puzzle game!

She is an icon of bravery and moral resolve, willing to do anything to save humanity. Captain America Peggy Carter is the bravest of the team. 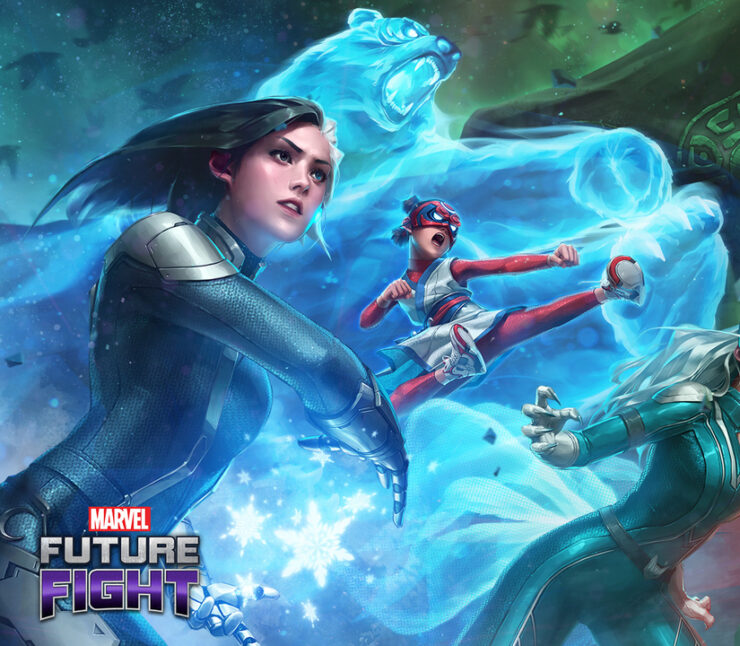 Luna Snow and Crescent appeared first in the MARVEL Future Fight title. Luna Snow is an ice-wielding K-pop star/part-time hero that became a full-time operative with an absolutely dazzling Andromeda Suit. Crescent is a ten year old Korean girl named Dan Bi, raised by a single father whose job dealt with mystical antiques until he mysteriously disappeared. When Dan Bi wears a red bear mask her father left behind, she unleashes a 12 foot tall glowing “half-moon” bear named Io that she can control. She’s also a taekwondo expert.

These two powerhouses made their comic book debut in a comic called War of the Realms: New Agents of Atlas, during a crossover event in which monsters from Norse mythology attacked the entire Marvel Universe. In the comic, Luna Snow and Crescent & Io work together to begin defeating Queen Sindr, a beast of pure heat and magma and fire, who happens to be the daughter of the fire giant Surtur.

As a spirit bear, Io is impervious to the Musepelheim flames. And of course, Luna Snow could grab the magma minions with no problem at all. In fact, her ice powers were the biggest threat to Sindr’s attack on all of Asia. All the while, Amadeus Cho and Cindy Moon (Silk) gawk seeing the famous K-pop star in action!

No matter how new these characters were, fans seemed to absolutely adore seeing them come to life in comic form, expressing their appreciation of the book’s poetic themes and seriously fantastic art. The Agents of Atlas were brought back for a second limited series following their team-up in War of the Realms, and here’s hoping we see more of them soon! 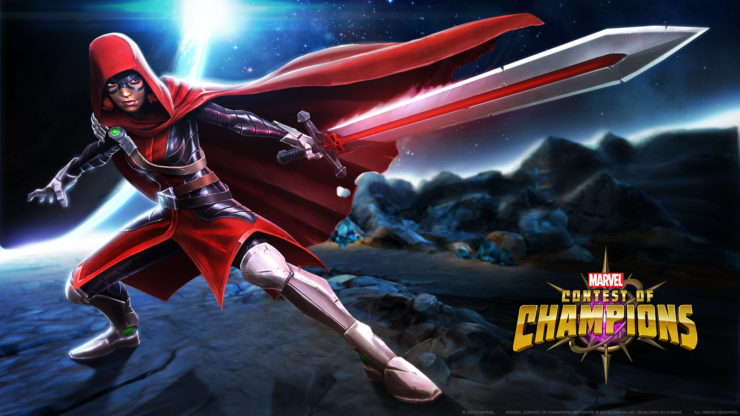 Jeannine Sauvage made her debut as the new vigilante Guillotine in comics and in Marvel Contest of Champions all at the same time. Her debut was unique in that it was coordinated, launching her first appearances nearly simultaneously into the world of the Collector and his ISO-fueled battle plans.

Guillotine is also unique because she is not the first person to wield the mystical sword that grants her the strength and power. The weapon she wields is La Fleur du Mal, a sentient sword with an endless bloodlust, which drives its welders to kill for its purpose. While Jeannine is the first Guillotine fans have ever met, she immediately introduced a new legacy into the Marvel Universe.

Every person cursed with inheriting the sword must become Guillotine, but not every person who wields the sword must be evil. In fact, in Jeannine’s bloodline alone there have been just as many heroes as there are villains. The sword connects her to all of her ancestors so that she can rely on them for advice and power when need be.

Guillotine will kill her enemies, not only to satiate the sword, but for justice! After all, there is no one else that could withstand the insanity of the cursed sword. No other bloodline and no other way to ensure that La Fleur du Mal is used for good.

Who is your favorite character introduced to comics from a Marvel Games title? Let us know in the comments, and don’t forget to Let Your Geek Sideshow! 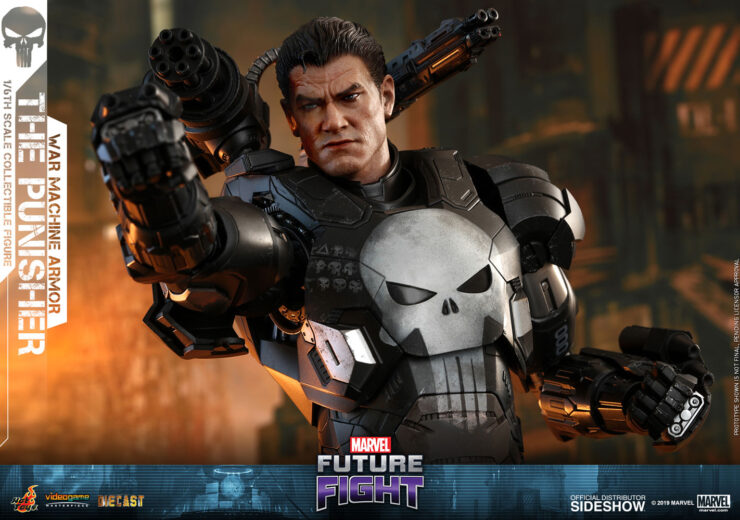 If you’re looking to upgrade your collection with some Marvel Games collectibles, be sure to check out The Punisher War Machine Armor Sixth Scale Figure by Hot Toys, which faithfully recreates this epic costume change in a highly detailed, articulated figure. This figure is in-stock and could be deployed into your Marvel collectibles faster than a rocket-boosted suit of Stark armor.