In 2018, the hit animated film Spider-Man: Into the Spider-Verse introduced us to multiple Spideys from multiple Earths. Fans are eagerly anticipating the already-announced sequel, wondering where in the Spider-Verse we might go next.

Let’s take a look at what makes each Earth in the known Spider-Verse different, and how that affected our favorite Spider-Heroes.

Spider-Gwen is from Earth-65 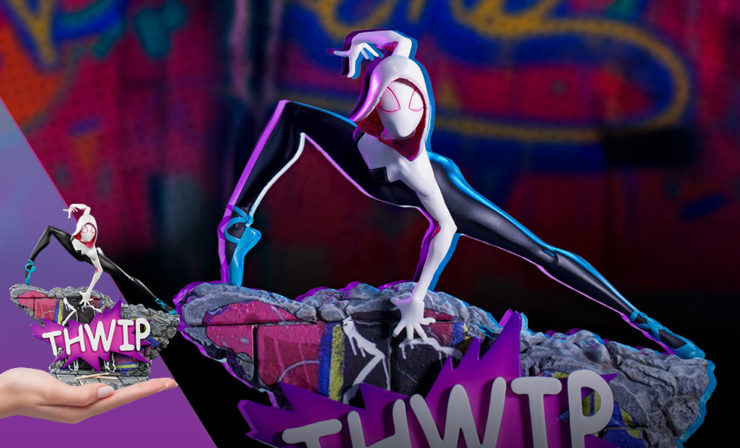 Earth-65 has one major variation from the classic Spider-Man that you know and love. Instead of Peter Parker getting bitten by a radioactive spider, it was his classmate and love interest, Gwen Stacy, who received the fateful fangs. Spider-Gwen swung onto the scene and became the Spider-Hero of that dimension.

She’s usually good friends with Peter Parker, but depending on the story, Peter has been known to go dark. On this Earth, he always wanted to be special like Gwen Stacy and overcome his bullies, so he performed terrible experiments on himself and eventually became The Lizard of Earth-65. Spider-Woman (more commonly known as Spider-Gwen) defeats the villainous Lizard in battle and Peter Parker dies in her arms and she becomes wanted by the city’s police, seen as responsible for the death of an innocent boy.

In the film, the look of Spider-Gwen’s home world is informed by the exceptional artwork of artist Robbie Rodriguez and colorist Rico Renzi, who gave the original Spider-Gwen series its vibrant, rock-and-roll style with bold pinks, yellows, and blues throughout. Spider-Ham hails from the quacky universe of Earth-8311, a universe of anthropomorphic characters and counterparts to the human heroes we know and love. He spends a good bit of his time just monkeyin’ around and stopping all sorts of murders (groups of crows and otherwise). And the strangest part is that he was actually born a spider, but he was bitten by a radioactive pig! His full name is Peter Porker, the Spectacular Spider-Ham.

He spends most his time fighting Ducktor Doom alongside his hero friends: Deerdevil, Goose Rider, and the Fantastic Fur. And while he’s a bit goofy, he’s truly one in a Cha-million.

Spider-Ham’s unique visual style in the film is, of course, inspired by other famous animated animals like the Looney Tunes, like Road Runner and Wile E. Coyote, Buggs Bunny, and more. What a ham!

Miles Morales is from Earth-1610 Miles Morales was straight out of Earth-1610 (also known as the Ultimates Universe), an alternate reality where Peter Parker dies and Miles takes on the mantle of Spider-Man. He became Spider-Man at even earlier age than Peter Parker, starting at thirteen! In the comics, he now lives in the prime Marvel Universe and works alongside Earth-616 Peter Parker.

His powers are also slightly different than Peter Parker’s. While he does have superhuman speed, strength, reflexes, Spider-Senses, and more, there’s a few extra powers on top of it. For example, he can create powerful bio-electric shocks, and he can also use a Spider-Camouflage to blend into his surroundings and turn practically invisible. Miles even uses his own parkour skills to distinguish himself from the traditional moves of wall-crawling and web-slinging we’re familiar with.

The look and feel of Earth-1610 in this film is highly informed by Miles himself, blending hip hop, graffiti art, and traditional comic book layouts to create the visual feast that bio-electric shocked audiences when Into the Spider-Verse hit first hit the big screen. Peni Parker comes from Earth-14512, a reality that is particularly reminiscent of Japanese mech suit anime. Her animation is drastically different than most of the other characters, and even the use of sound effects and visual freeze-frame moments surrounding her reference classic manga layouts.

Peni Parker’s father engineered and created the mech suit called SP//dr that was controlled primarily by a radioactive spider pilot. The operator of the suit could link psychically with the spider and the suit once they were bitten. When her father died, she decided to get bitten by the radioactive spider and work with the SP//dr suit. She often teams up with her reality’s version of Daredevil, who acts as a mentor and friend to her.

Peni was introduced in Marvel’s Edge of Spider-Verse #5, written in 2014 by Gerard Way (known for  being the lead vocalist of My Chemical Romance and writing the comic series The Umbrella Academy). Spider-Gwen had made her comics debut just three issues earlier, in Edge of Spider-Verse #2. 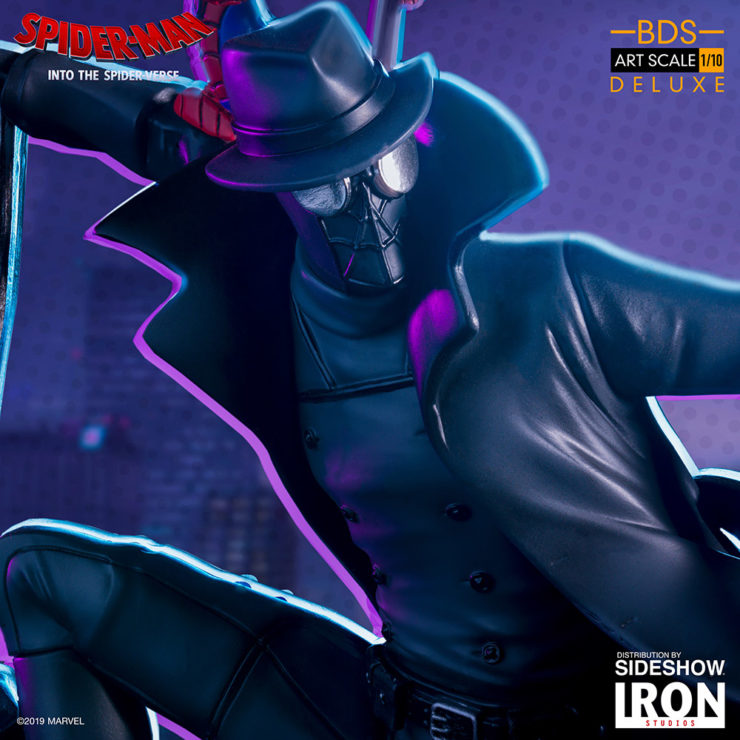 Spider-Man Noir is from the Marvel Noir Universe, Earth-90214. The only difference in this alternate universe is when all of the heroes came to be. These stories take place in the 20s and 30s, and feature particularly period-appropriate superhero costumes. Sometimes they also rustle in the breeze even indoors, when there’s no wind. It’s all very stylized, y’see.

Peter Parker in the Marvel Noir universe is a bit more of a hardened hero, and acts a bit more like your classic detective. He’ll certainly never turn away from saving the city, or working with his Multiversal counterparts.

As is customary with the era of film noir, Earth-90214 is devoid of color until Peter Parker brings home a Rubik’s Cube. How will that affect the hard-boiled reality? Maybe we’ll find out in the sequel! 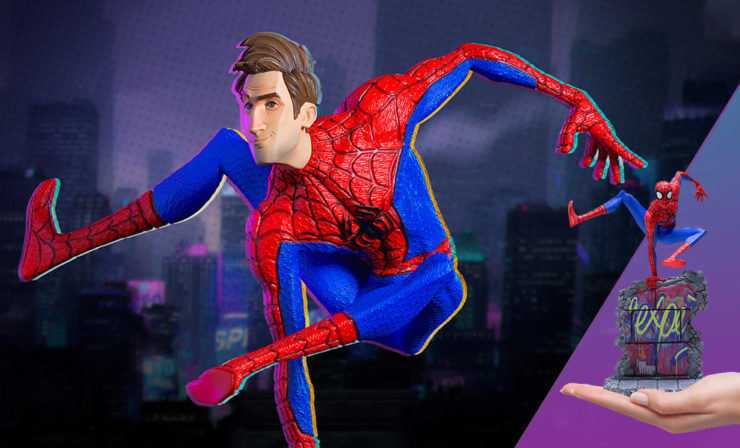 Peter B. Parker hails from Earth-616. This is often referred to as the main universe or the prime universe in Marvel continuity. We may not be as familiar with this version of Peter Parker, especially because we are usually watching stories of his younger days. But this Spider-Man has suffered a lot, and has been through many trials and tribulations beyond the adventures fans know and love.

But nothing will ever get in the way of Spider-Man doing everything he can to help those he cares about and swinging into action when the world needs saving. He acts as a mentor to Miles Morales, and often helps organize the Multiversal meetings.

Visually, his universe doesn’t look too different from Earth-1610, as the Marvel Prime and Ultimates universes were extremely similar to one another. The greatest changes were to the heroes themselves, as evidenced by Miles’ blonde, blue-eyed Peter Parker, and Peter B. Parker’s own inability to emotionally separate Ultimates Mary Jane from the one on his own Earth. We only see Spider-Man 2099 for a brief moment at the end of Into the Spider-Verse, but we have a feeling that he might appear more in the sequel. Earth-928 is a possible and dark future for Earth-616. This world is controlled by a few powerful and greedy men, and the war between humans and mutants ended with endless mutant massacres. In all the chaos, Miguel O’Hara performed experiments on himself to replicate the original Spider-Man’s powers.

Instead of being bitten by a radioactive spider, he infused his DNA with a spider’s giving him even more spider-like abilities. While he has incredible superhuman strength, durability, and more, he differs in a few major ways. First, Spider-Man 2099 is so fast that it looks like there’s two of him, so enemies attack the decoy. Second, he is able to communicate telepathically. He has talons and fangs with paralyzing venom. And finally, he has real spider-silk that he can shoot from his forearms.

We didn’t really get to see his actual Earth, but fans got just enough of a tease to want more of this hyper-intelligent Spider-Hero. We’ll keep our talons crossed for his return.

Each Earth gives us a new look into one of the most iconic hero stories of all time, and each Spidey shows us what it takes to stand up against evil and fight for the people they care about. It’s like they say in the movie- anyone can wear the mask.

Looking for even bigger web of information about these radioactive heroes? Check out our guide to Who’s Who in the Spider-Verse.

Sideshow has all your favorite Into the Spider-Verse collectibles, so swing into action and collect your favorite Marvel figures today!