The first season of Jujutsu Kaisen has had anime fans enthralled since its release in October 2020. While the hunger for season 2 of the dark fantasy title builds, a tiny snack to satisfy our appetites is on its way in the form of Jujutsu Kaisen 0. The prequel film releases in the US and Canada on March 18 and will tell a story that is brand new to fans of the anime and the manga alike.

The show tells the story of a young boy named Yuji Itadori who is thrust into the world of sentient curses and the jujutsu sorcerers who exorcise them. Depictions of these battles between curses and sorcerers have introduced the audience to cursed techniques, methods by which cursed energy is harnessed and used in battle. While not necessarily the most powerful, the following list presents some of Jujutsu Kaisen’s more interesting techniques. 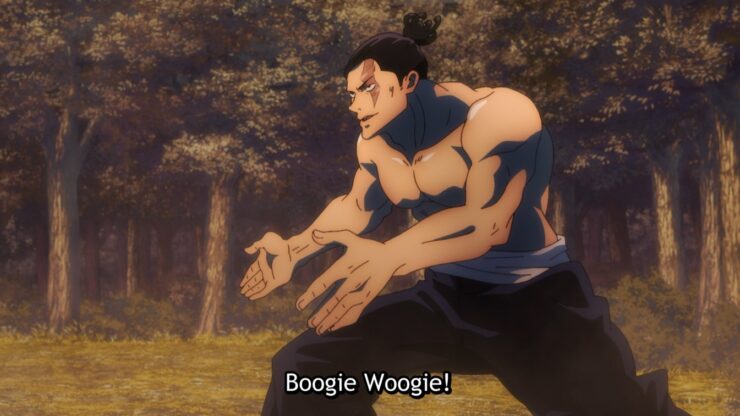 If for no other reason than its fantastic name, Todo’s Boogie Woogie stands out from an already impressive list of cursed techniques in the show. Todo is able to instantaneously swap the positions of any two objects or people given they have enough cursed energy. While it’s not quite teleportation, Boogie Woogie still gives Todo incredible mobility in a fight and, as Fushiguro notes in their fight in episode 8, Todo is already extremely fast. Add to that the fact that he’s as powerful as his body suggests and much smarter than his personality would lead some to believe, and it’s undeniable that Boogie Woogie is an innate technique that helps make Todo a formidable opponent.

Even the technique’s greatest potential weakness — that he has to clap in order to perform it, thus letting on that a switch may be coming — becomes a brilliant disruptive maneuver thanks to Todo’s battle acumen. As seen in his fight with Yuji against the cursed spirit Hanami, Todo mixes his opponents by throwing in random, useless claps with the ones he actually needs to activate his technique. Anyone who tries to adjust their own technique to account for Boogie Woogie is thrown for a loop, unable to tell whether he’s preparing to make a switch or simply feigning, allowing Todo to stay unpredictable and completely wreck his enemies.

On a side note, it’s often said that fights are like dances with their own sort of rhythm. With the clapping and a name like Boogie Woogie … Todo is absolutely going to break out in a little dance routine in the middle of a battle one day and really throw someone off. It’s totally coming. 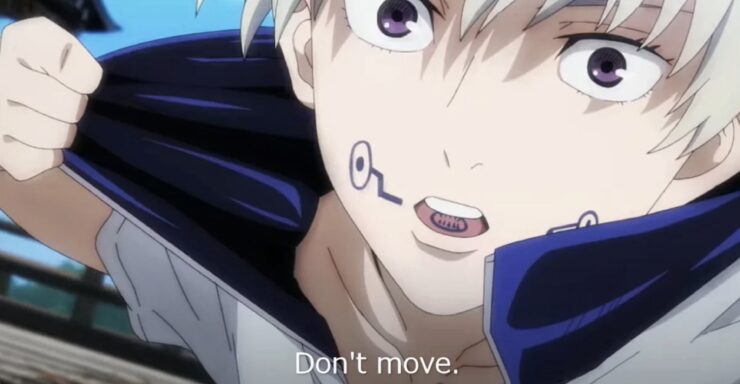 Every writer knows that words have power, but Inumaki takes the adage and makes it frighteningly literal. Cursed Speech is an innate technique that amplifies the inherent power of words and imbues them with cursed energy. At its most simplistic, Inumaki’s technique allows him to compel his target to do or endure whatever he says.

He calls Miwa over the phone and tells her to go to sleep, and she drops like a fly. He tells a fully charging Todo to stop moving, and Todo just … does it. Because he has to. That is far, far too much power for any single person to possess.

To be fair, there are risks and limitations to Cursed Speech. Anyone who is aware of the technique can learn how to nullify it as Kamo notes, and Panda explains to Itadori that using Cursed Speech is as dangerous for Inumaki as it is for anyone within hearing range of him. Overusing the technique can drain him and cause him to cough up blood, as seen in his fight against Hanami. He also risks creating a sort of feedback loop if his speech is too powerful. Theoretically he could tell someone to drop dead … but he would probably drop dead too.

To keep himself and everyone around him safe, Inumaki keeps his mouth covered and limits his speech to nice, neutral words like rice ball ingredients that can only ever inflict sudden hunger on anyone who hears him. His limited vocabulary makes communicating with him difficult to be sure, but he is clearly willing to put up with the inconvenience to avoid unwittingly hurting himself and others.

Anime viewers don’t know much about Idle Transfiguration aside from the fact that it makes Mahito seemingly invincible. The technique allows him to touch and change the shapes of souls, his own included, transfiguring the bodies of those whose souls he touches as a result. This is what allows him to morph parts of his body into just about anything he can imagine and heal his own injuries. As he explains to Nanami during their fight, the shape of one’s soul determines the shape of one’s body so he’s not truly healing himself despite how it looks. He is simply maintaining his soul’s original shape, and this restores the shape of the body around it.

Normal people die once the shape of their souls is distorted, and Mahito has no qualms about stockpiling (his words, not ours) human victims to aid him in his exploration of and experimentation with his technique. Scarier still, even those who manage to protect their souls with cursed energy eventually succumb to Mahito’s touch, and ultimately death, if he succeeds in using the technique against them enough. Mahito has the speed, strength, and intelligence to infiltrate any opponents’ defenses and develop techniques on the fly, and this technique in combination with all of those things makes him more dangerous than any of the show’s antagonists thus far. 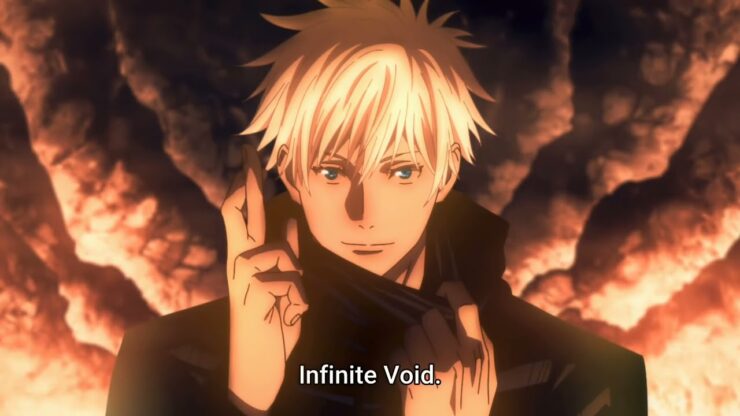 Unfortunately, we couldn’t headline this section “Literally Everything That Gojo Ever Does” but that’s really what we meant. Gojo is one of the show’s most popular characters, and in-universe, its most powerful jujutsu sorcerer. The nature and scope of his techniques make that fact very obvious. Infinite Void is just one of the abilities that Gojo has, but it’s easily one of his most fascinating. It is his Domain Expansion — a physical space manifested from the user’s own innate domain and imbued with a cursed technique — that is literally what it says on the tin.

Or so it appears.

The space created by the Domain Expansion is, in fact, infinite, but it is certainly not a void. Those trapped within Infinite Void are instead met with everything: every sound, taste, touch, smell, and thought, every stimulus imaginable comes at his victims all at once, overwhelming their minds and rendering their bodies immovable. When faced with all things, as Gojo himself puts it, “All you can do is die peacefully.”

Even a curse as powerful as Jogo is left helpless against the barrage of Infinite Void, and it’s only Gojo’s dissolution of the Domain Expansion that saves his life. It’s a philosophical conundrum turned into a powerful combat technique, and that easily makes it one of the most interesting cursed techniques in the show so far. 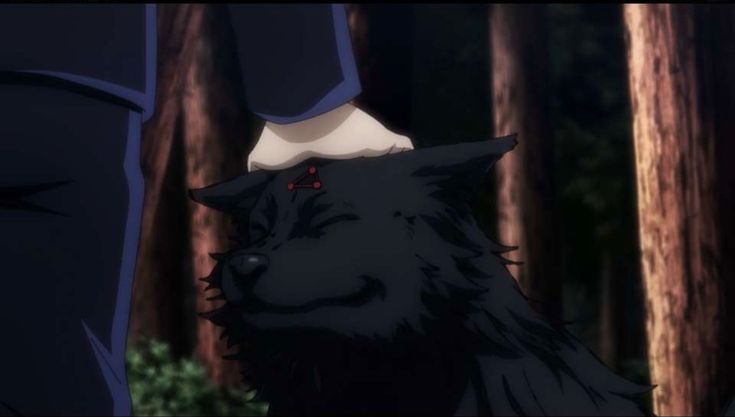 Now why would shikigami be ahead of literal infinity? How does Fushiguro earn a spot above Gojo, the strongest of all jujutsu sorcerers? Easy.

Doggos. Fushiguro can create doggos. Two of them. Obviously, this means he wins everything.

The Ten Shadows technique allows Fushiguro to summon up to 10 shikigami, and despite the fact that he has summoned Nue, Toad, and even the Great Serpent, clearly the greatest of all of them are his demon dogs. What makes the technique even more interesting is the fact that it garners Fushiguro so much attention from people who are so much more powerful than he is. Sukuna takes immediate notice of him when he witnesses how Fushiguro fights as a close combat Ten Shadows user and says he’ll be keeping an eye on him.

When he improvises his Chimera Shadow Garden Domain Expansion and takes out the special grade curse in “The Origin of Obedience, Part 2,” Sukuna, still tucked away in Itadori’s mind, approves almost proudly. Gojo tells Fushiguro that he has the ability and potential to be as great as Itadori, that he needs to be greedier in his training and his desires for himself in order to push past his own boundaries. It seems as though Fushiguro’s innate gifts, in addition to his ability to use the Ten Shadows technique, make him someone to pay attention to. This potential is what truly makes the technique interesting (in addition to the doggos, obviously).

We’ve already seen Fushiguro push the limits of the technique, using it to store weapons and developing his Domain Expansion mid-battle, so the idea that there is so much that Fushiguro has yet to discover makes us eager to see what’s in store. Maybe there will be even more dogs.

There are so many other curses in season 1 of Jujutsu Kaisen alone; who knows what else we’ll see in Jujutsu Kaisen 0 and in season 2 once it finally arrives! Anticipation might drive more than a few fans to pick up the manga to get some sneak peeks into the future of the show, but for now, we’ll continue re-watching and dissecting the first season to get our fix.

Which Jujutsu Kaisen curse would you most like to use? Let us know in the comments and don’t forget to Let Your Geek Sideshow!