How about that Echo Base?

There’s a lot to be said for the resilience of the Rebels within the Star Wars universe. If we’re going to sit back and think about it, and we are, it’s fairly amazing that from an organizational perspective they were able to actually accomplish as much as they did. Let’s take a look at the ice planet of Hoth for example – specifically Echo Base. 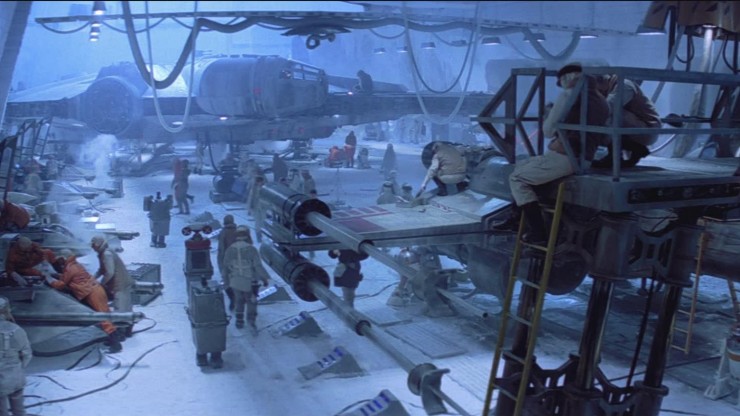 The ice caves that were originally parts of a massive glacier were expanded and linked together using artificial tunnels and what could best be described as “questionable building techniques.” They needed it up, and they needed it up fast.   Of course, if you’ve ever actually built a house, or a LEGO building, you know that if you rush things it might not go exactly as planned. However, we’re willing to bet that if you goofed on hanging your garage doors a wampa didn’t show up to knock over the garbage cans.

Blatant disregard for building codes aside, the staff at Echo Base was some of the best trained and outfitted that the Rebellion had at the time and made use of the fighter hanger, medical bays, and bunk facilities. That training and discipline was going to be particularly important as Echo Base was designed to be evacuated at a moment’s notice. A deflector shield and ion cannon were around to provide cover while a fleet of transports and ships made a hasty departure should something more concerning than a curious wampa come calling – like, say, the Galactic Empire and a fleet of Star Destroyers.

Which brings us to a bit more of that resilience that we spoke about a few paragraphs north of here. While everyone was packing up and getting off Hoth as fast as possible we witness the first mention of Rogue Group, piloting of all things, twelve converted airspeeders that were massively underpowered for the task at hand.

Insert some thrilling heroics here and we know what happens next – Luke Skywalker and Rogue Group buy enough time for everyone to make it out safely.

Logistically speaking we’re sure that they left a lot of stuff behind as they were escaping. How could they not have? We’re not saying that we’d go – Southern CA is a long way from the frozen wasteland of Hoth – but if a slightly used bacta tank shows up on Ebay…