As the Marvel Cinematic Universe’s Phase 4 comes to a close, fans have a whole Multiverse of excitement to look forward to with their favorite super heroes! Audiences have watched the Avengers assemble, the Infinity Stones come together, and heroes rise and fall through dozens of exciting films and television projects.

While waiting for the next premiere, why not bring home a window to this exciting world with original MCU art prints and Marvel concept art? Sideshow Art Prints offers a wide variety of prints and wall art collectibles from the Marvel Cinematic Universe that make incredible gifts. Choose from portraits of fan-favorite characters and key art from the films that has been transformed into a high-end print format.

Wanda and Vision: An Unusual Couple by Karen Hallion 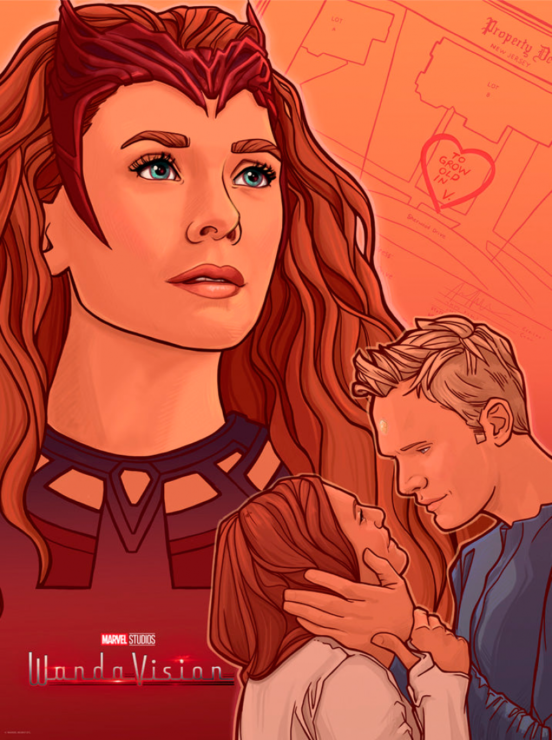 With the An Unusual Couple Art Print, she turns her talents to a Marvel couple whose love and loyalty stole our hearts in WandaVision. This scarlet-tinted portrait features a collage of images including Wanda in her most powerful witchy state, the property map of their home, and a sweet, domestic embrace between Wanda and Vision. Complete with the series logo, this unframed artwork is a must-have for Scarlet Witch fans.

The size-changing, mind-bending antics of the Ant-Man movies are captured perfectly in the Quantum Leap Lithograph by Cliff Cramp. Scott Lang takes a dive through the colorful Quantum Realm, shrinking smaller than an atom — although his unique Pym tech suit is perfectly visible in this vibrant composition.

Limited to an edition size of 250, each print comes with a Certificate of Authenticity and is hand-numbered. This Ant-Man artwork measures 12″ x 36″, making this a notable addition to any fan’s wall. 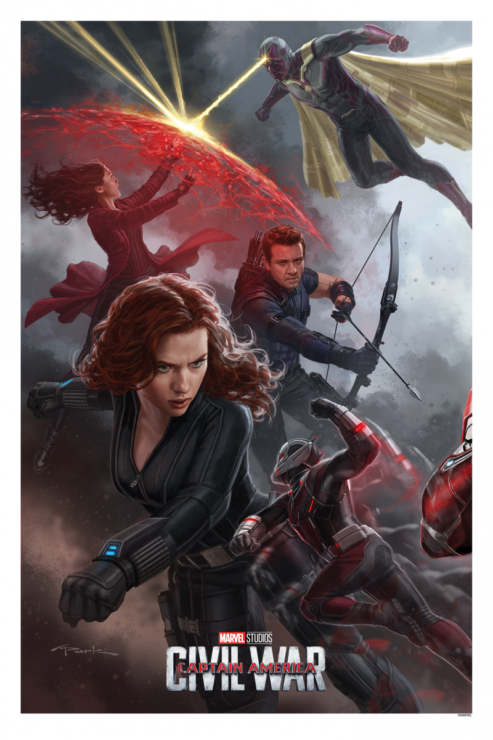 Andy Park is the Director of Visual Development for Marvel Studios, and his concept designs and key art have been responsible for many of the first looks fans get at new films in development. Part of a triptych composition of the infamous super hero clash, the Captain America: Civil War Part 1 Print shows Wanda, Vision, Hawkeye, Ant-Man, and Black Widow mid-battle.

Limited to an edition of only 150 pieces, this print makes a great gift for fans who took sides in the Team Cap vs. Team Iron Man fight. Parts 2 and 3, sold separately, complete the image — you can see a hint of Iron Man’s elbow in the far side of this print. However, this Marvel movie art print looks great by itself, featuring iconic characters in concept art that translated into an exciting battle in the film! 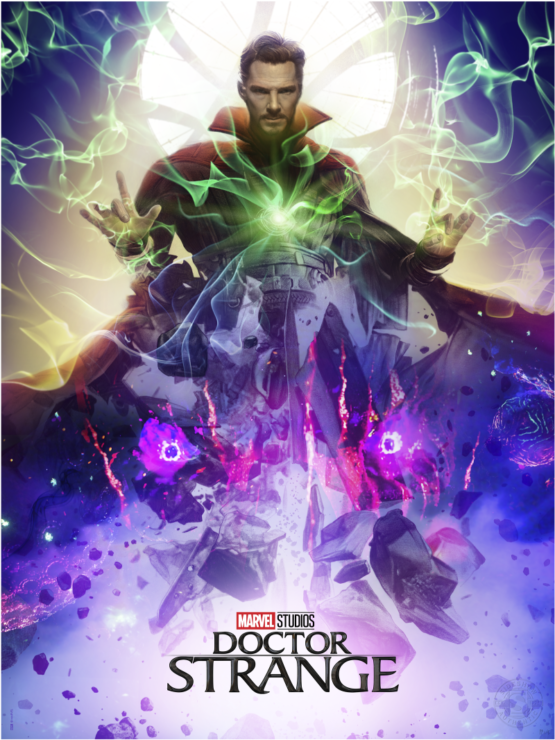 A mystifying gift in any dimension, the Doctor Strange Fine Art Print by Greg Ruth shows the sheer magical might of the Sorcerer Supreme. A green aura drifts from the Eye of Agamotto as Stephen Strange wields the mystic arts against his Dark Dimension foe, Dormammu.

This limited edition giclée artwork is officially licensed by Marvel and features the Marvel Studios logo and movie title. Art collectors might recognize Ruth’s highly sought-after works from other print shops like Mondo, making this a must-have gift for the holidays.

The Avengers: We’ll Avenge It by J. J. Lendl 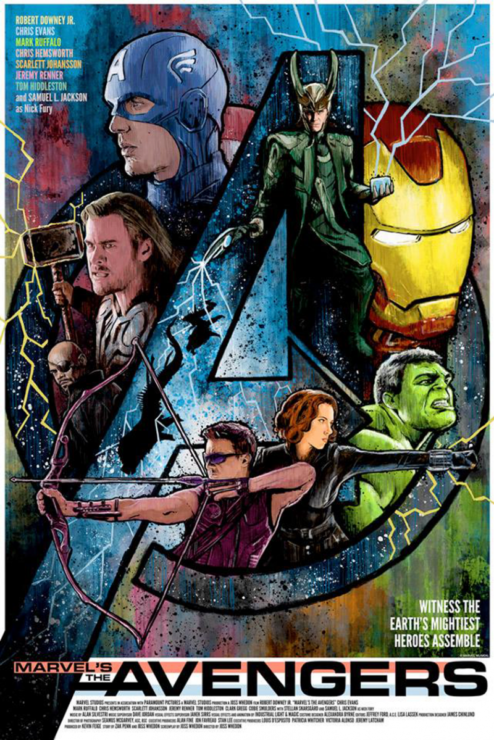 The colorful We’ll Avenge It Lithograph by J.J. Lendl combines the iconic original MCU Avengers into a newly styled movie poster design. Remember when Loki and the Chitauri were the biggest threat this team faced? Good times. Well, fans can capture the action of the Battle of Manhattan with this print that’s limited to an edition of only 295 ever produced.

Heroes Captain America, Thor, Nick Fury, Iron Man, Hulk, Black Widow, and Hawkeye all surround the Avengers team logo while Loki and the Chitauri Leviathans infiltrate the center. The image also features the actor credits and the tagline, “Witness the Earth’s Mightiest Heroes Assemble.” Crackling lightning and paint splatter add to the illustrated look of this unique piece that will take a place of pride in any collection. 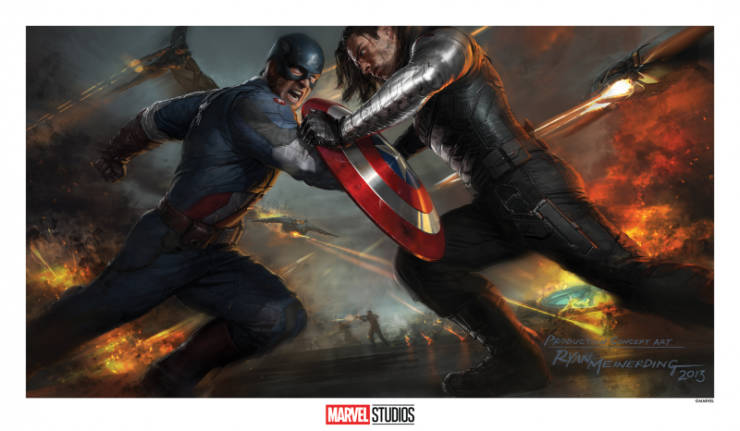 Artist Ryan Meinerding is the Head of Visual Development at Marvel Studios, whose concept work has helped bring films like Iron Man, Black Panther, and Avengers: Infinity War to life. His Captain America: The Winter Soldier Fine Art Giclée is a perfect example of the visualization from illustration to live action.

Fans of Bucky Barnes and Steve Rogers won’t want to miss out on this epic art print depicting a clash over the star-spangled shield in the midst of a flaming battlefield. The composition shows the brushstrokes and detailed rendering of the actor likenesses, the costume concepts, and the blur of action. It makes a perfect pairing with your entertainment center for a multimedia Marvel experience!

Guardians of the Galaxy: Glowing Seeds by Christopher Clark 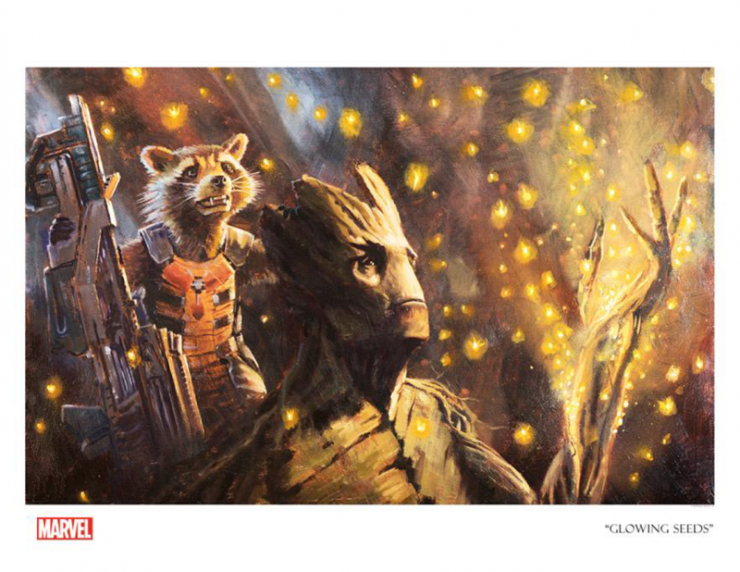 Tell your loved ones “We are Groot” this holiday season with the gift of the Glowing Seeds Giclée by Christopher Clark. This dreamy Guardians of the Galaxy-inspired artwork features Groot and Rocket Raccoon illuminated by the golden spores of the Flora Colossus. Each print is hand-numbered as part of the edition of only 150 pieces and comes with a Certificate of Authenticity from ACME Archives.

Glowing Seeds makes a thoughtful gift for GOTG fans, especially with Vol. 3 on the horizon. Bring things back to the earliest days of this team of intergalactic A-holes with the original Groot before his heartbreaking sacrifice, along with Rocket’s orange uniform and one of his many blaster weapons. This dynamic duo will surely brighten any wall.

You can find these and a number of other MCU art prints by visiting Sideshow Art Prints. Browse now for great gift ideas for the holidays, and don’t forget to Let Your Geek Sideshow!

The Best Spider-Man: Into the Spider-Verse Quotes