For the first time since her debut in 1982, Monica Rambeau has her own solo Marvel Comics series! The series, titled Monica Rambeau: Photon, will be written by Eve Ewing with art by Luca Maresca.

Longtime Marvel Comics readers know that Monica has shifted through many identities and power sets over the years. She’s tangled with other well-known heroes as well as helped to shape important storylines. Plus, she’ll be a main feature in the upcoming film The Marvels. Let’s take a closer look at Monica’s comics history as well as her illuminating presence in the MCU. 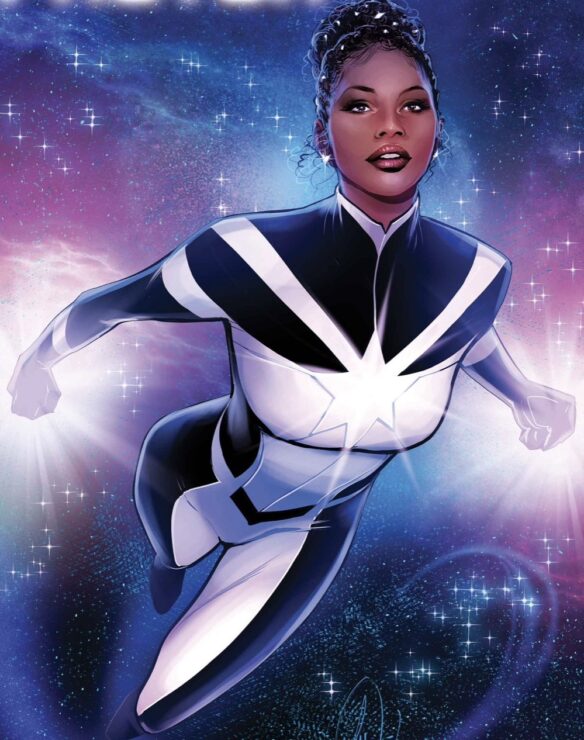 In the comics, Monica Rambeau is from New Orleans. Though she worked for the police department’s harbor division, she found her upward mobility limited as a Black woman. Her first appearance was in Amazing Spider-Man Annual #16, where she crossed paths with Spidey while looking for Reed Richards.

Monica had recently gained her light-based electromagnetic powers from exposure to extra-dimensional energy. With the help of Richards, she hoped to gain better control of these powers. Iron Man was able to divert some of her energies and Wasp then invited Monica to work with the Avengers. Eventually, Monica would even be the Avengers’ chairwoman.

What Are Monica Rambeau’s Powers? 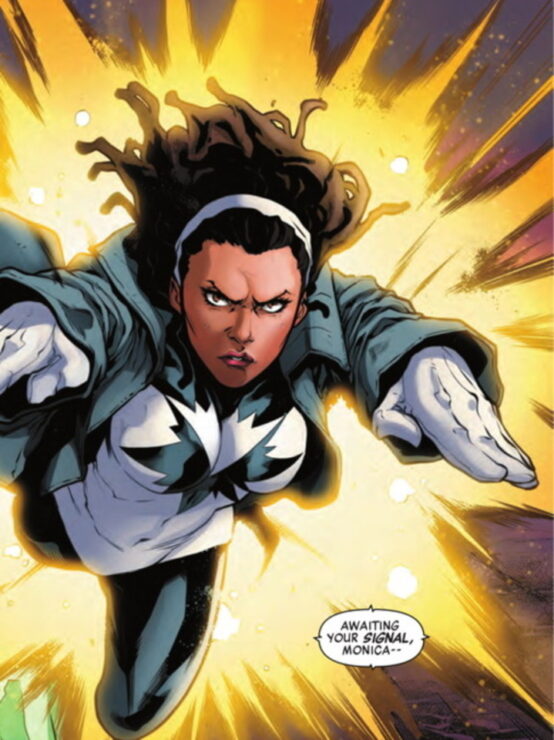 Monica’s powers are essentially full control of the electromagnetic spectrum. She can also direct this into bursts of energy and shift her body into any form of energy. This allows her to phase in and out of most materials and fly through space faster than the speed of light.

Over time, Monica has gone through many super hero monikers. At first, she was Captain Marvel. Similar to Jen Walters on She-Hulk: Attorney at Law, Monica was given this nickname by a misguided news broadcast. She embraced the identity but later it was taken back by the original Captain Marvel’s son, Genis-Vell.

In an irritating twist for Monica, Genis-Vell then took her new name Photon as his own. Finally, Monica settled on Spectrum as a reference to her wide range of magnificent power — and to distance herself from past mistakes. 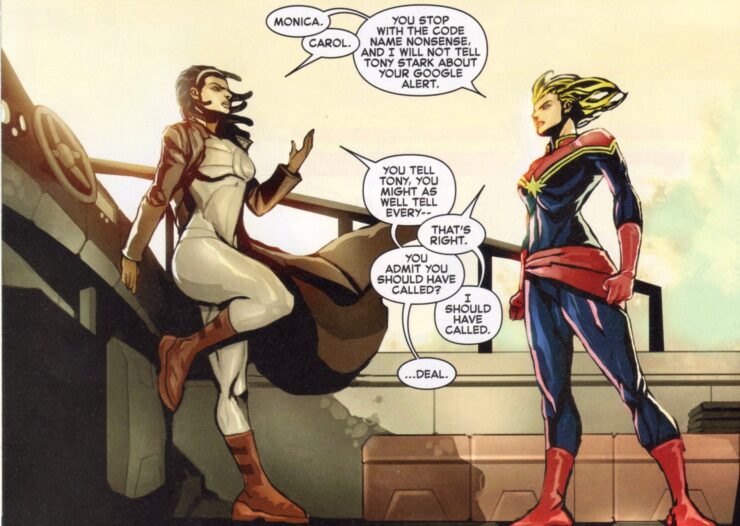 During her tenure as a super hero, Monica has joined many of Marvel’s most famous teams, including the Avengers. She’s also fought with the Mighty Avengers, the Secret Avengers, and the Ultimates, among other teams. Most recently, she’s been working with Hawkeye’s Thunderbolts team, a PR project under Luke Cage’s authority as Mayor of NYC.

In addition to her long history with the Avengers and their various incarnations, Monica is also quite close to Dr. Jericho Drumm, AKA Doctor Voodoo. Both are from New Orleans and they even tried dating for a while. They also worked alongside Black Panther and Blade against various forces of evil. Monica’s light-based powers make her especially effective against vampires. While helping T’Challa rescue Shuri from Killmonger, Monica was captured and tortured. Once released, she killed Killmonger in retaliation. 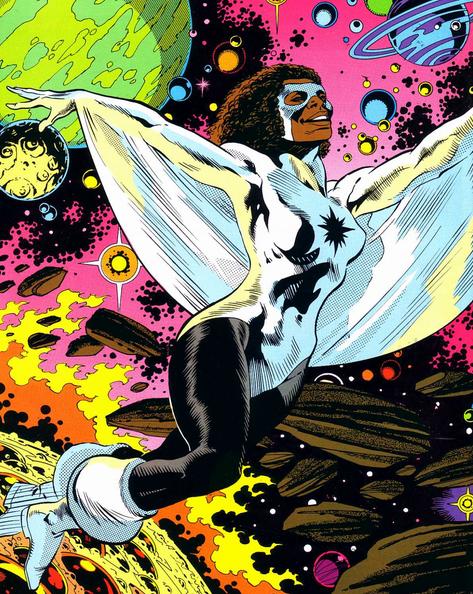 When Monica was fairly new to the Avengers scene, she was swept away to Battleworld by the Beyonder during the original Secret Wars event. After the Multiverse-reforming events of Jonathan Hickman’s Secret Wars, Monica joined the Ultimates. This team, composed of Monica, America Chavez, Blue Marvel, Black Panther, and Captain Marvel, transformed Galactus from a force of destruction into a Lifebringer.

Alongside Scarlet Witch, Monica has brought down Nyx, a Greek goddess of night. She’s also clashed with Thor, helped rehabilitate a malfunctioning Vision, and grappled with fluctuating power levels. At one point, Monica taught Carol Danvers how to make a duplicate of pure energy, which resulted in the new hero Binary. This ability came in handy during their struggle against Vox Supreme, a Super-Inhuman following Kree beliefs who wanted to destroy the Avengers.

In her new solo series, Monica is making a special cosmic delivery to Doctor Strange as part of her work with S.W.O.R.D. She’ll also reunite with Spider-Man and face a new villain called Hinge.

Monica Rambeau in The Marvels 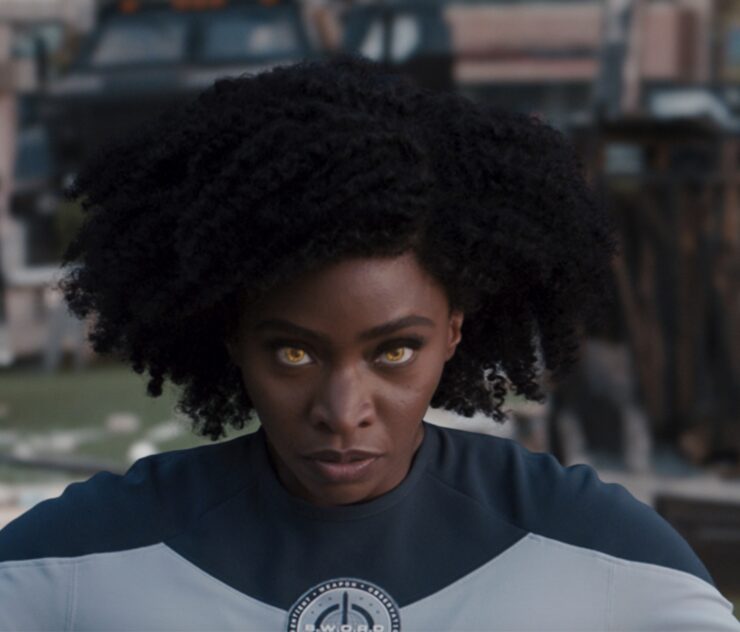 Over in the MCU, Monica Rambeau made her on-screen debut in Captain Marvel. The young version of Monica was played by Akira Akbar. Rambeau’s mother, Maria, founded S.W.O.R.D. and was a close companion of Carol Danvers — in alternate universe featured in Doctor Strange in the Multiverse of Madness, Maria was even Captain Marvel herself.

When Wanda Maximoff took control of Westview, New Jersey, using a huge hex to alter reality, Monica Rambeau (played by Teyonah Parris) stepped in. She had recently returned from the Blink and tried to help Wanda confront her trauma. After passing through Wanda’s hex barrier multiple times, the exposure to various energies caused Monica to develop her signature powers. At the series’ end, a Skrull appeared to invite Monica to meet Captain Marvel up in space.

The Marvels, directed by Nia DeCosta and set to premiere July 28, 2023, will explore Monica’s partnership with Carol Danvers as well as bring Kamala Khan, AKA Ms. Marvel, into the fold.

Are you excited for Monica’s solo series and her upcoming appearance in The Marvels? Connect with other Marvel fans in our Local Comics Society Facebook Group, and don’t forget to Let Your Geek Sideshow!

What You Need to Know About Doom Patrol Before Season 4