We all know Thor Odinson, the mighty Avenger, by his signature cape, flowing locks, and of course, his hammer – but he is not the only one who has had the power to bring the thunder! As it is written on Mjolnir, the only requirement to hold the mystic hammer is to be worthy, and with the recent inscription change, worthiness is not restricted to just the men.  Just ask Jane Foster, the newest Thor in an epic legacy of heroism.

There have been quite a few others who have been worthy enough to handle this magical weapon over the years. Let’s take a look of some of the most marvelous hammer-heads who have wielded the mystical Mjolnir! 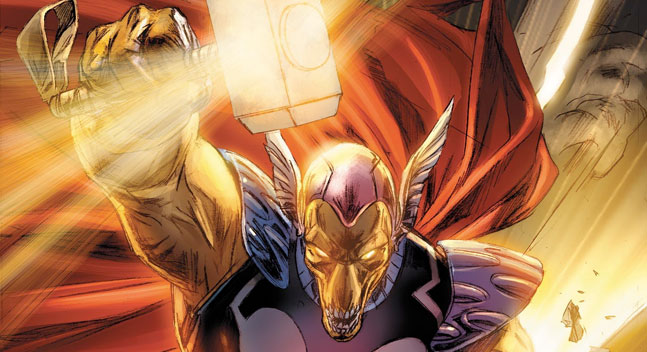 Champion of the horse-faced aliens called the Korbinites, Beta Ray Bill was chosen to save his race from the promise of evil that threatened to destroy their world. Encountering Thor in space, he mistook the thunderer for an enemy and fought him. Thor reverted to his form of Donald Blake after dropping the hammer, and upon curiously examining Blake’s walking cane, Bill struck it on the ground. This unleashed the hammer Mjolnir and granted the alien its powers.

Bill claimed the hammer as his prize, but Odin was not willing to let it leave Thor’s grasp so soon. The two fought in a fire realm, both falling unconscious due to extreme exhaustion. However, Beta Ray Bill recovered faster and saved Thor from incoming lava.

The hammer was returned to Thor, but the Korbinite was given his own replica hammer, called Stormbreaker. He used this hammer to protect his home world as well as the Asgardians, growing particularly close to Lady Sif. 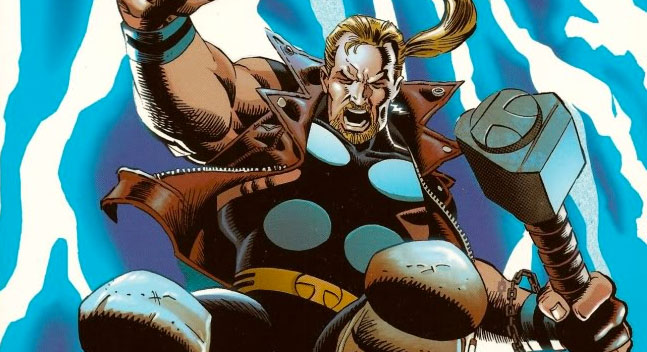 Eric Masterson was an architect who got dangerously wounded after meeting Thor. In an attempt to save him, Odin gave Thor’s form and powers to Eric, who then began a new life as a hero.

The two were separated and merged together on a few more occasions, and eventually a disgraced Thor turned over the hammer Mjolnir to Eric for good, making him the new defender of the Earth. During this time he teamed up with the Avengers during the Kree/Shi’ar war, and joined Beta Ray Bill and Dargo Ktor in the Thor Corps to fight villains like Loki.

Eventually, Enchantress tricked him into a fight over Lady Sif with the former Thor, who won and reclaimed his hammer. Eric was granted a mystical mace called Thunderstrike, made of the same Uru metal as Mjolnir.

In the Marvel What If? comic series about the Age of Ultron, the future looked grim and villains ran amok as Thor’s unexpected death led to Ragnarok unending. Natasha and the Avengers fought to defend Castle Doom in Latveria against an onslaught of Frost Giants.

Amid the chaos, which was worsened by the sudden appearance of the world serpent Jormungand, Natasha retrieved Mjolnir and was deemed worthy, becoming a super-spy thunder goddess hybrid, with a hammer for smashing and her widows bites for stinging. She used her powers to destroy all the attackers from Asgard, eventually destroying herself in the process.

She was commemorated in this alternate universe with a monument to her immense power and bravery.

On an adventure that took the X-Men to Asgard, Loki had his own mystical hammer forged which was called Stormcaster. It granted the holder powers nearly exact to Thor’s own, and Loki tempted the thunderous mutant Ororo Munroe, AKA Storm, with its powers. She became Goddess of Thunder, but was under Loki’s influence.

Eventually she gave up its powers, but in another, more recent adventure following the events of Siege, Thor rediscovered Stormcaster. Storm was drawn to it once more, but overcoming its influence she grabbed the true Mjolnir from Thor’s hands and smashed the false hammer once and for all. 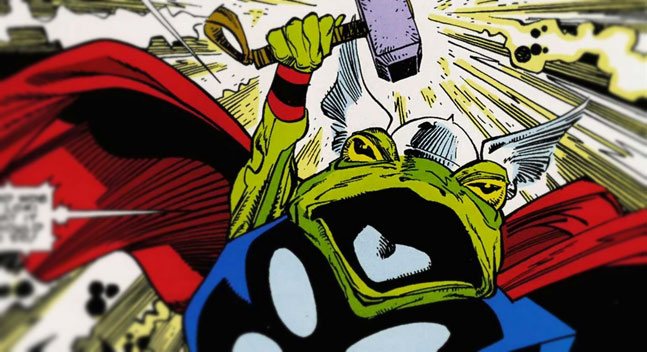 Simon Walterson (named for Thor writer and artist Walter Simonson) was a promising college football player who lost everything after a terrible injury, ending his career. Eventually, circumstances led him to cross paths with a mystic. When he was unable to pay for her services, Simon was cursed to take the form of a frog forever.

In Central Park he met a clan of frogs, and they were later joined by a cursed Thor who was also amphibious. The two battled rats that were attacking the clan, and eventually Simon realized, after watching his new ally lift Mjolnir, that he was fighting alongside Thor himself.

After their battle, Thor’s goats came to retrieve the frog prince, accidentally chipping a sliver of Mjolnir with their hooves. Simon lifted the sliver, which became the hammer Frogjolnir, transforming him into Throg, Frog of Thunder. He later joined the Pet Avengers. 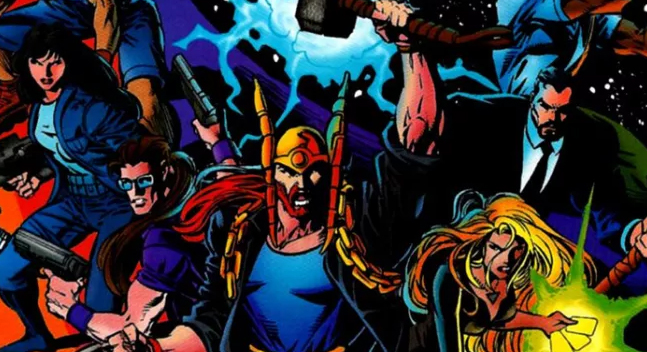 Roger Norvell, known to his friends as Red, was brought to Asgard along with the rest of his film crew when Loki hatched one of his famous schemes. Arriving on the eve of Ragnarok, the apocalypse, Red fell in love with Lady Sif the warrior and instantly set out to woo her. With Loki’s help, the mortal man obtained artifacts of power (Thor’s iron gloves and belt of strength) in order to compete with the Thunder God for the hand of Sif.

Overwhelmed with his new power, Red defeated Thor and accidentally killed one of his coworkers in a mad spree of lightning blasts. Having defeated the prince of Asgard, the usurper took his hammer, but because this was just before Ragnarok, Red took the fall that was fated for Thor. After the man died in a battle with Jormungand the Serpent, Odin resurrected him and gave him his own Uru hammer, which was called Crusher. 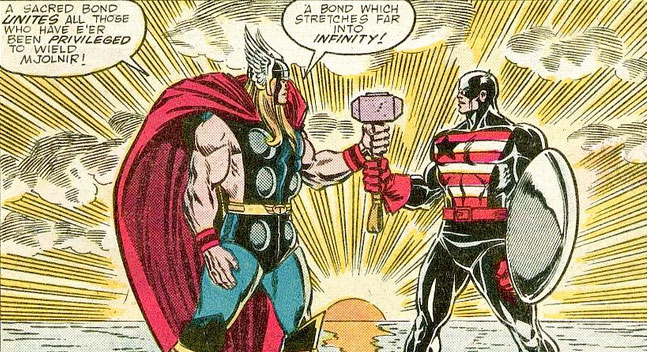 The good captain himself picked up the hammer in The Mighty Thor series in the ’80s. Beset by the minions of the villain Seth, the Avengers are extremely overwhelmed. Thor and Cap were on uneasy terms at this time, but all was soon righted when, desperate to put the hurt on the goons who are dog-piling him, Captain America picked up the hammer and started swinging. (The hammer, though, did not transform him in any way.)

Thor decided the Star-Spangled Man must be alright if he could pick up Mjolnir and use its powers. The two saluted each other with mutual respect, Cap promising to always strive to uphold the values Mjolnir would want from him, should this emergency ever arise again. And we think he is certainly worthy. 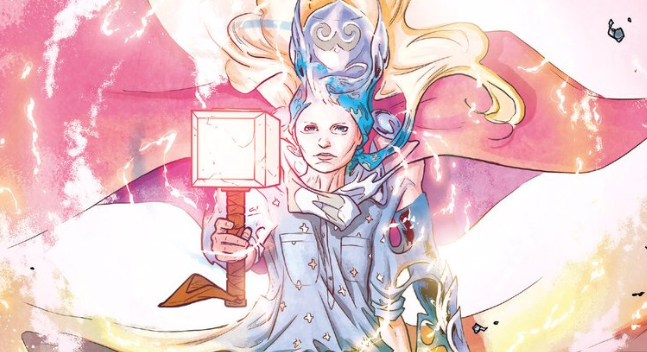 Longtime love interest and constant ally of Thor, Jane Foster got her first chance to pick up the hammer in the Marvel What If? series in the ’70s. After she finds Mjolnir in the cave where Donald Blake was supposed to be, Jane transforms into the Goddess of Thunder and calls herself Thordis.

In 2014, Marvel announced that a new hero would hold the hammer after Thor Odinson lost his worthiness during Original Sin. The new Thor was a mysterious woman whose identity was hidden until just before the Secret Wars summer event the following year. Sure enough, Jane Foster had proved herself worthy to wield Mjolnir, and had to guard her secret very carefully from the many foes of Thor who had moved to take over the realms in the absence of the God of Thunder. 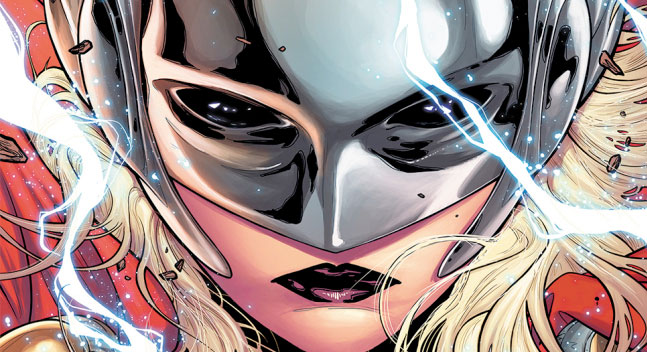 During her time as Thor, Jane Foster has already fought some of the most fearsome foes in the Ten Realms, like Malekith the Accursed, the Destroyer armor, and even Odin the All-Father himself. While protecting her identity, she won many allies like Angela of Heven, the Avengers, and a specially assembled team of female heroes including Black Widow, Spider-Woman, and Captain Marvel.

Jane’s mortal form, sick with cancer, grows weaker the more time she spends as Thor, but as a doctor committed to saving lives, she puts the needs of the realms before her own. While there are plenty of adventures left for the Goddess of Thunder, she has already accomplished a lifetime of heroic feats that make her among the worthiest of all the hammer-holders.

In two different crossover comics, both DC heroes wielded the power of Thor. Wonder Woman lifted the hammer before going to battle with Storm. She discarded Mjolnir, though, to make the fight fairer. She honorably lost immediately afterwards. 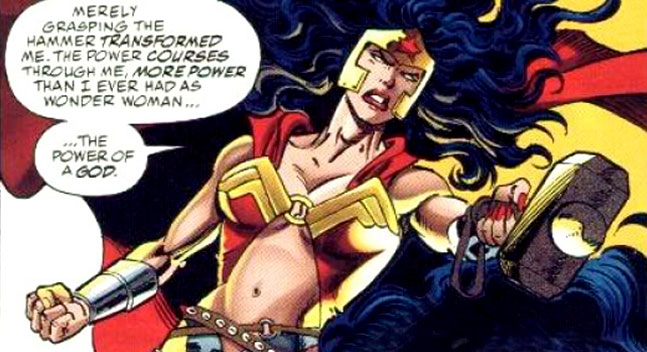 Superman, lacking the heart of a warrior, would have been unable to lift the hammer if Odin hadn’t undone the enchantment. Fortunately, this happened before the Kryptonian used the hammer to deal a crushing blow to the baddie the Justice League and Avengers were fighting together. When he went to return Mjolnir to Thor, his worthiness had worn off and he was unable to hand off the hammer. 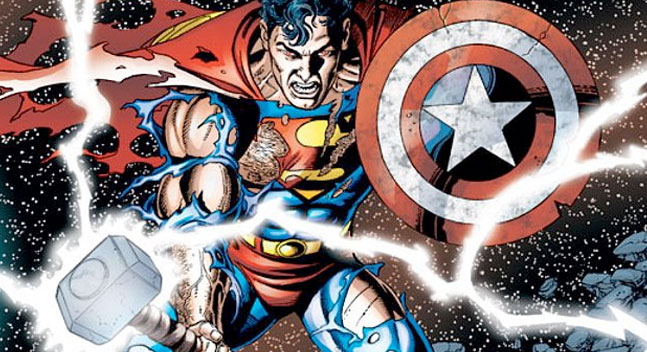 So, which other comic characters do you think are worthy of holding the hammer? Do you think you would be worthy to hold the hammer, if given the chance?

Keep the conversation going over at side.show/geekgroup, and don’t forget to Let Your Geek Sideshow!