Nerdbastards.com tells you everything you need to know about Sideshow’s Deadpool Sixth Scale Figure 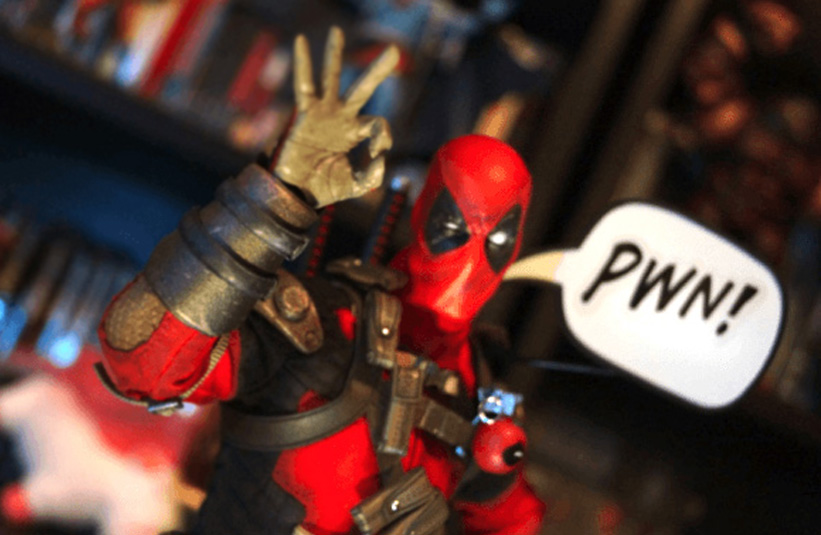 Sideshow’s sixth scale Merc with a Mouth made his way to our friends at Nerdbastards.com, and now they’re here to tell you everything there is to know about it. That’s right. The dual sword wielding, pistol packing, grenade lobbing sociopath is now available for you to own, put on display, or touch yourself with. Whatever you decide to do with it, it’ll bring you or a loved one such great joy and a smile so big that cheek cramps are a real possibility. So what are we waiting for? On with the review!

PACKAGING
Emblazoned on the front of the box is Deadpool, front and center, giving a thumbs up, all faded under a red and black filter. He’s there, staring at you, quietly judging your life choices – whilst possibly thinking about water parks and little people skipping through a field with pinwheels in their hands. Least that’s how I read his expression. The exact same shot of Deadpool is featured more clearly on the back of the box, and in this case, in black & white (for dramatic effect, of course).

Slipping the shoebox-style cover off, there’s a graphical insert of Deadpool’s logo designed around a target, reminding everyone the mercenary life isn’t an easy one. The inner sides of the box displays Deadpool’s name spelled across what almost looks like a tombstone-type design. Groovy. 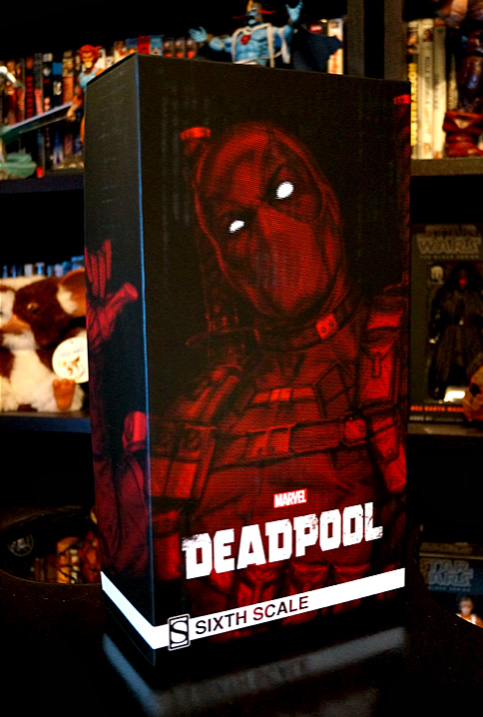 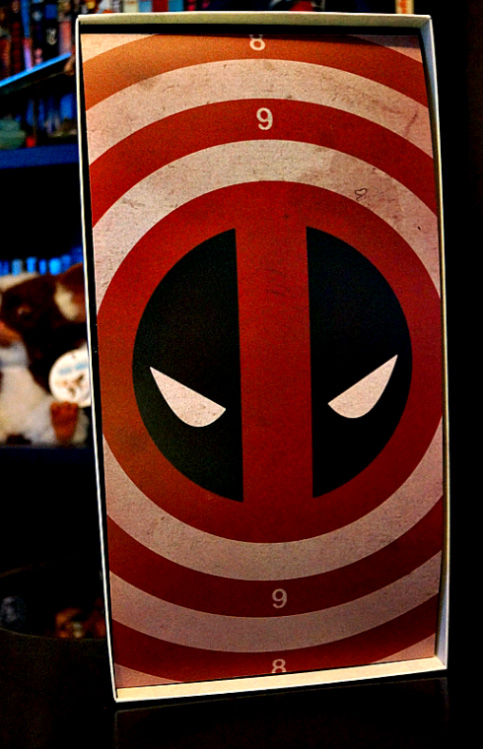 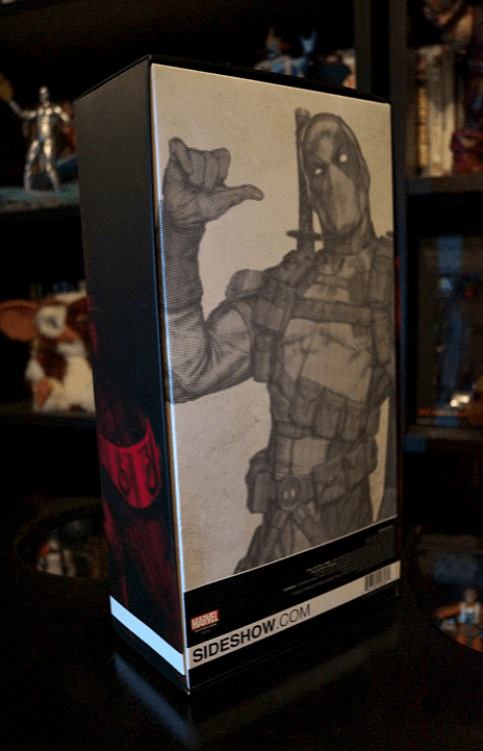 Taking eyes off the graphics, I was struck at the size of the box – particularly how small it is compared to other Sideshow/Hot Toys figures. I think back to the Spider-Man figure from The Amazing Spider-Man 2, which is a figure approx the same shape and size of Deadpool, and the box on that was at least a quarter larger all around. Of course, the size of one’s box doesn’t really matter, it’s what in the box that matters, right? I only talk size as it observance on how Sideshow has changed their packaging – smaller boxes means they’ve altered the way they have compartmentalized it’s contents – and they have! 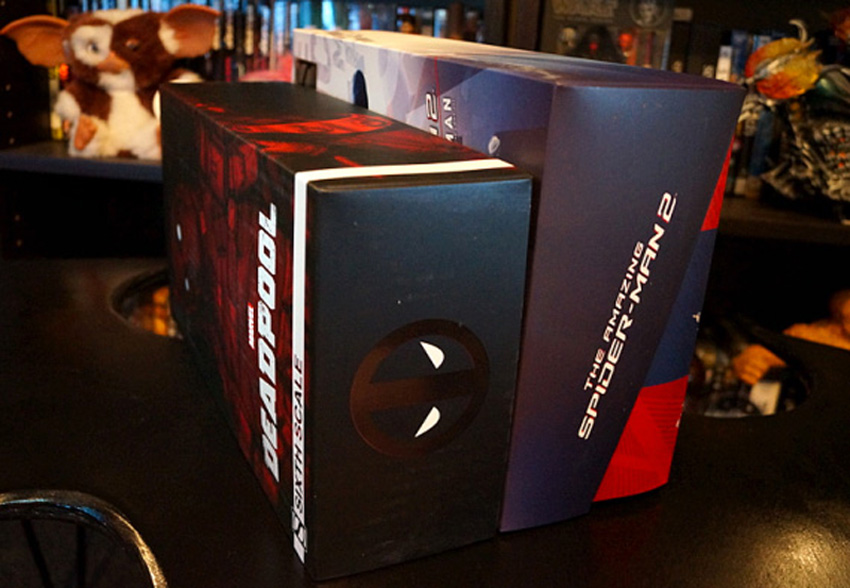 Removing the insert, there he is – in all his glory – laying there in a foam lattice all wrapped up in plastic (I always knew Deadpool was into a little light bondage), with his accessories laid in another foam layer beneath. For the unaware, past collectible figures such as this have been housed in plastic trays with a vacu-formed covering enclosed over it. This layered foam is a first (least as far as I know). I suppose it protects the figure just the same, it’s just different. 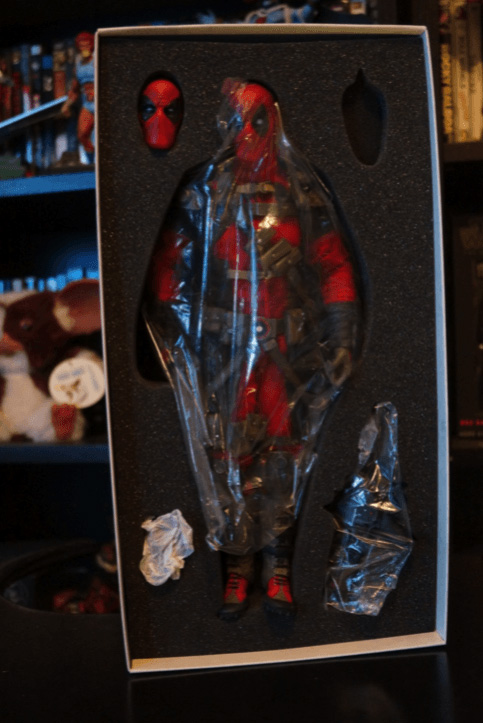 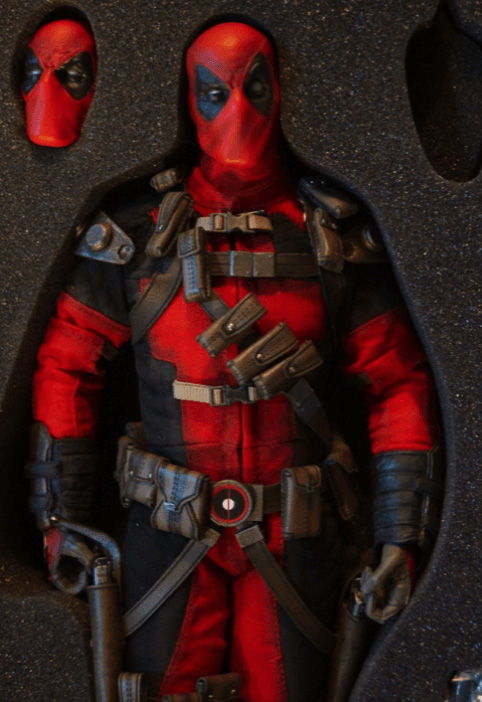 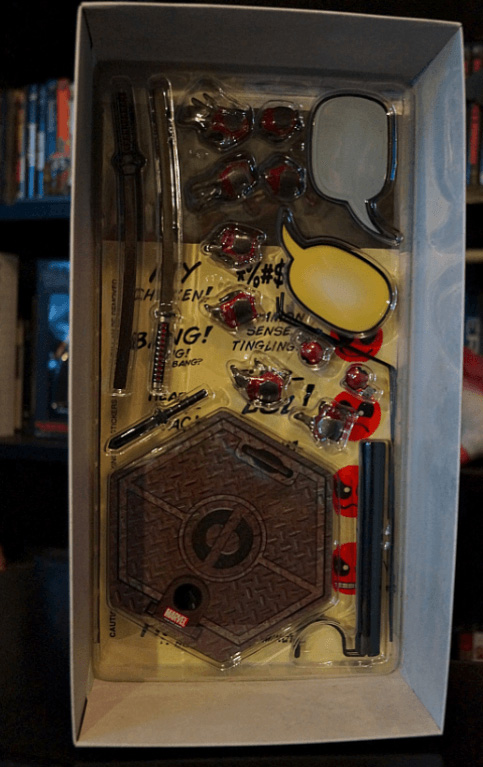 Does this alteration to packaging really change impressions or overall quality of the product? No, it doesn’t. It features the same awesome box art and same attention to protecting figures (with no twist ties or plastic to cut through, mind you. And that’s a beautiful thing) as with any Sideshow/Hot Toys collectible – just tighter and more practical. In fact, I for one, prefer this. Dealing with foam is easier than plastic.

Let’s go ahead and acknowledge the fact that this isn’t Ryan Reynolds’ Deadpool from the upcoming movie. Sideshow decided to go their own way and create a figure of their own inspired design.

Deadpool stands 12 inches tall, about the same scale as a Chipotle burrito (mmm’ burritos). The outfit is 100% hand tailored with a stitch embroidered pattern in the black areas and a dark shaded wash over the red parts. The true detail lays within the suit’s harness – the belt, leg, and chest strappings. There are gun holsters, magazine clip holders, utility pouches, and so on. All made of a bonded leather, hand stitched, and feature metal fasteners and hooks. It all adds to the flavor and realism of the costume. 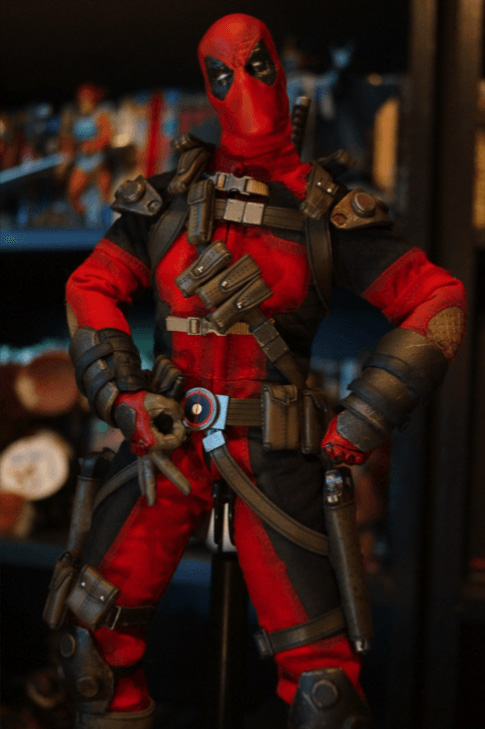 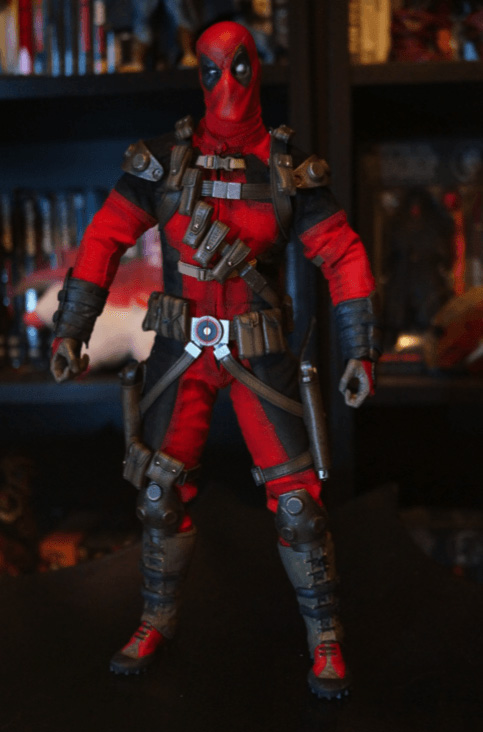 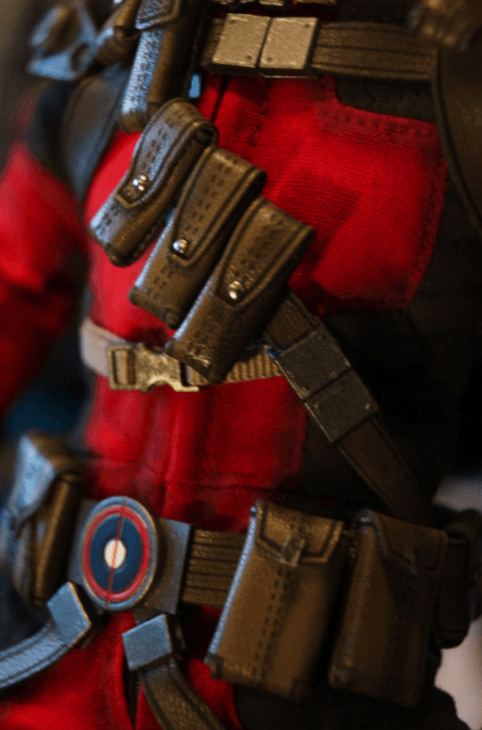 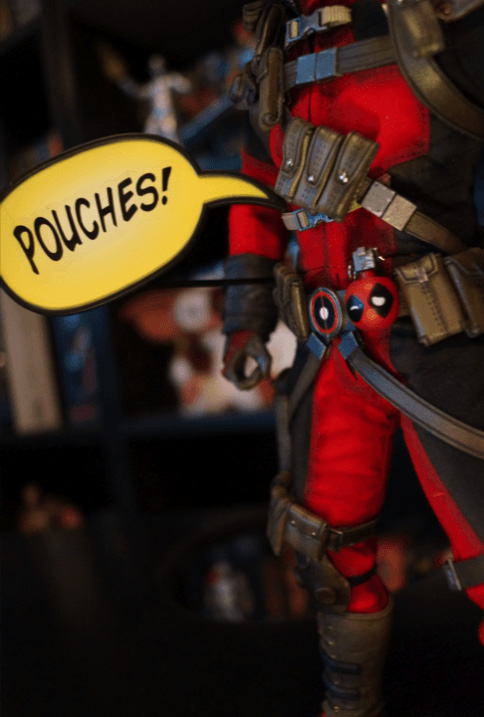 Deadpool comes with not one but two sculpted heads each featuring a unique expression. The first is a fairly static and serious looking Deadpool; looking like he’s ready to kill something. And the second… well let’s just say it looks like he just saw your internet browser history (For shame!) They are well painted (nice shadowing/wash), well detailed (look at the stitching around the eyes), and well… generally awesome. 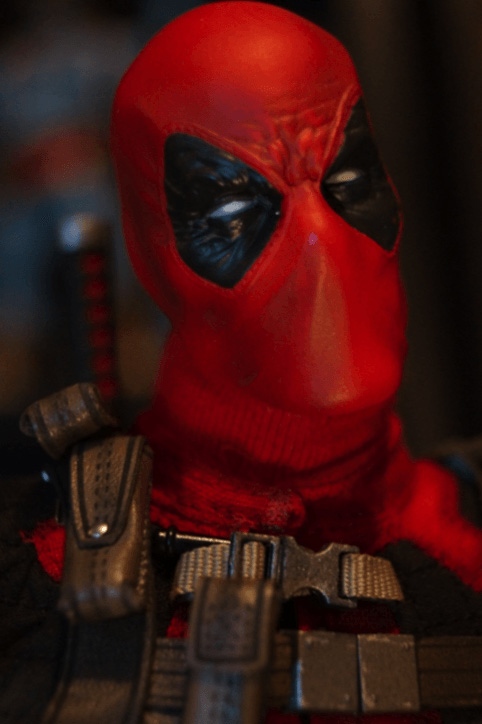 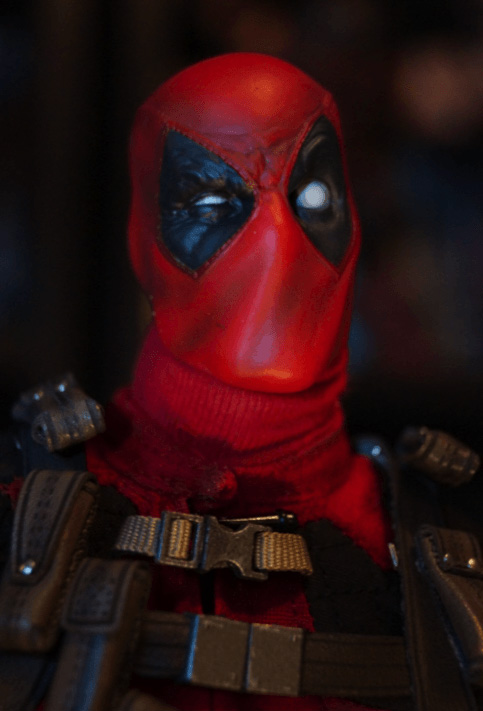 The pose-ability of the figure is also quite nice, though the costume (its thickness and tightness of seams) does prevent a fuller range of motion. You’re not gonna get that complete YMCA photoshoot you we’re hoping for, but there are plenty of poses and display options to be had. If there was a version of Kama Sutra that showed various bodily positions best opt for killin’ people (I’d buy that for a dollar), this figure could do about 70% of those poses before it pulls a hammy and asks for a taco break.

This figure is packed with tons of goodies, including long and short stabbing weapons (katanas & knife) , two bitchin’ pistols, a Whoop Ass-ault rifle, and Big Boomin’ Balls. The quality of which is a tad inconsistent. Take for example one of the handguns, which is detailed enough to cockback mimicking the chambering of a round. Details like that are what make figures like this beyond any mere collectible (the devil is in the detail). But then there are those katanas, which are just heaps of plastic – they should have had a chrome finish or real looking material in the hilts. 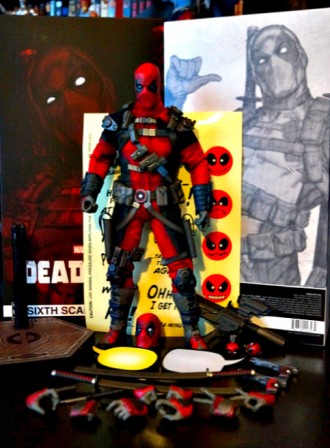 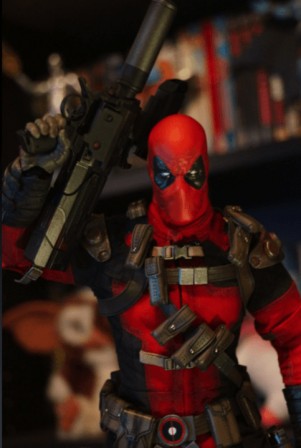 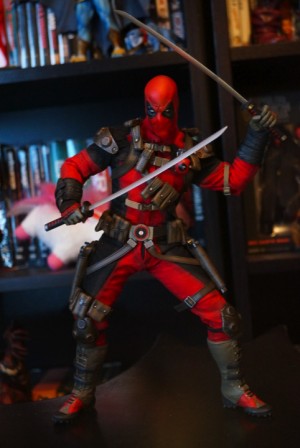 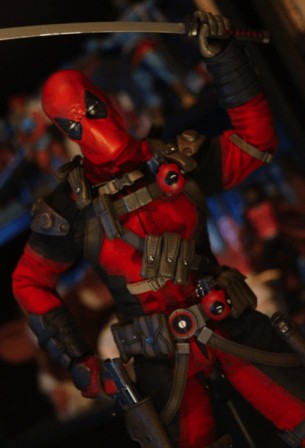 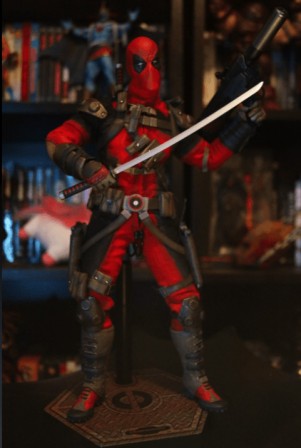 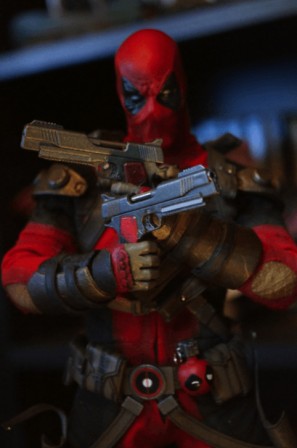 Famous for his over-the-top personality, Marvel’s Merc with a Mouth can fully express himself with multiple swap-out hand gestures and plug-in word bubble accessories, customizable with explicit thoughts and witty words. This was a thought of pure genius, putting Deadpool’s humorous psychosis on full display. It’s a feature that wouldn’t work with every figure (try picturing a thought bubble with Wolverine saying “Hey bub” and it would look tacky as hell) but it works here… it so freakin’ works here. 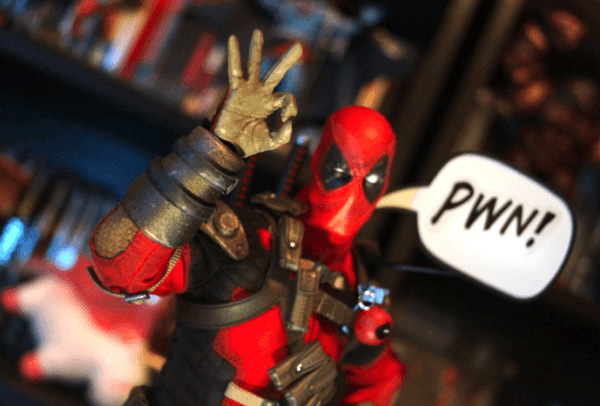 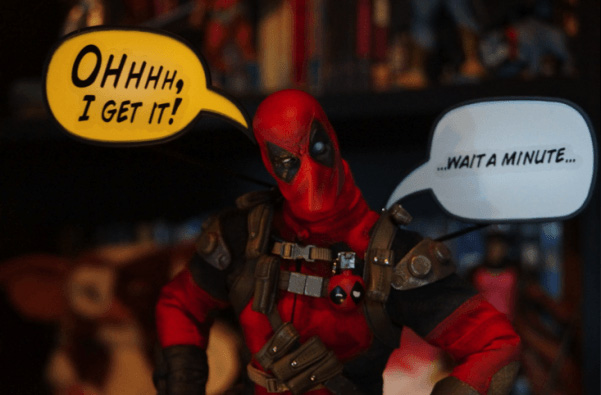 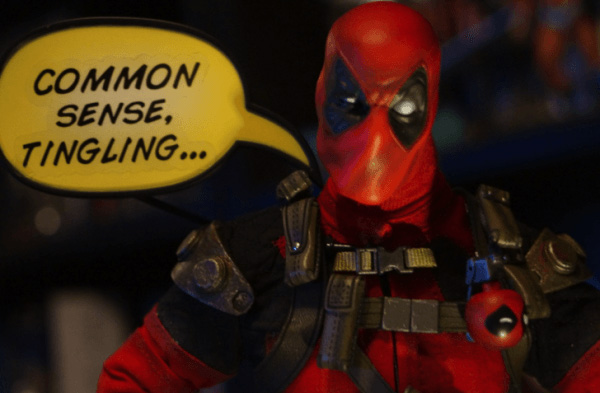 This figure does cost $225. Now, that’s a lot of Chimichangas, but this is a solid figure. While many fans will surely want a Deadpool figure modeled after Ryan Reynolds’ upcoming movie, this figure is, for now, in the upper echelon of Deadpool toys. It captures the bravado, buffoonery, and general badassery exceedingly well. I wouldn’t say it’s everything you could possibly want out of a Deadpool figure but its pretty damn close. You will have to resist the temptation of taking co-op buddy photos with him on your adventures together and cut together a Facebook video montage set to the song “You’re my best friend”, ’cause that may actually happen.

Many thanks to Luke at Nerdbastards.com for the review!