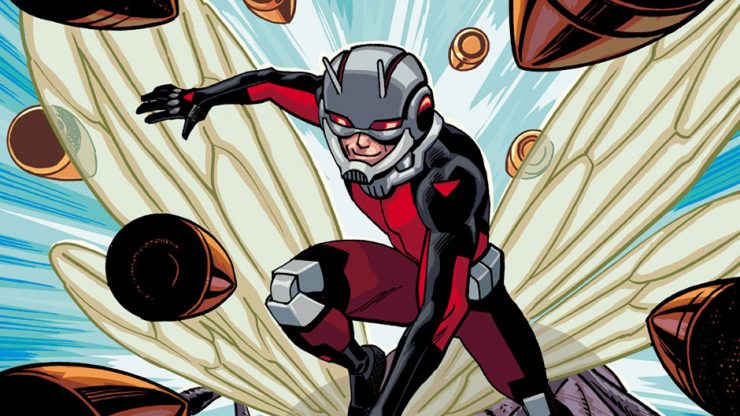 Entertainment Weekly announced that a series of Marvel animated shorts focusing on Ant-Man will debut this June on Disney XD. Well of course Ant-Man would get animated shorts– he is the smallest superhero, after all.

Scott Lang will be voiced by Josh Keaton, and the series will include familiar Ant-Man characters like Wasp, Hank Pym, and Cassie Lang. The shorts will follow his crime-fighting crusades, as well as when Scott takes some downtime to be a good father to his daughter.

The previous series of Marvel shorts featured Rocket and Groot from the Guardians of the Galaxy. These six upcoming Ant-Man shorts are also animated by Passion Pictures, and will premiere on June 10 and June 11th. Each will be two minutes in length (and perhaps 2 inches in height?). We can’t wait to see what Ant-Man is up to!

Meanwhile on Twitter, Evangeline Lilly teased that she has just had a fitting for her Wasp costume for the upcoming Ant-Man sequel, Ant-Man and Wasp.

Had a fitting for my #Wasp costume last week. Am I the only one getting excited????? #eee #antmanandthewasp #marvel @marvel pic.twitter.com/YafBFFznGS

Lilly excitedly posted a piece of concept art for the costume, which shares design elements with the Ant-Man suit used by Paul Rudd’s Scott Lang in the first film. The helmet design looks similar to Ant-Man’s, but features a peak in the dome that is reminiscent of some of Janet van Dyne’s classic looks.  It also shares the black and red color scheme of both the early Wasp and Ant-Man designs.

While the Wasp in this film will be Hope Pym rather than her mother Janet, it’s clear that the character’s legacy lives on through the mantle and the costume.

So, what are your thoughts? There is still a ways to go before Ant-Man and Wasp crawls onto the big screen, but in the meantime, we’ll have some animated shorts to keep us up to date on Marvel’s tiniest team. Sounds like a picnic!

The Force is Strong with these Vanity Fair Star Wars Covers