Sideshow’s latest FIRST LOOK video gives fans an in-depth view of the Mirror Universe Spock Sixth Scale Figure. A beloved first officer is changed in an alternate universe with this figure inspired by Star Trek: The Original Series. Check out all of the articulation, accessories, and calculated details that are included with the latest release from EXO-6.

As part of the celebration for Star Trek‘s 55th anniversary, EXO-6 revealed their first 1/6 scale museum-quality figure. Inspired by the original series’ “Mirror, Mirror” episode, there’s something … strange about this Spock. During this landmark episode, some members of the Enterprise crew are transported to a parallel dimension. In this mirror universe, the benevolent Federation never existed and instead the morally corrupt Terran Empire reigns.

Leonard Nimoy sported a beard for this portrayal of Mirror Universe Spock, which has been recreated by EXO-6 in great detail for this new 1/6 scale figure. Standing 12″ tall, every element — from his 23rd-century uniform to his Terran awards — is authentically reproduced. The original portrait sculpt of Nimoy as Mirror Spock has an authentic, hand-painted likeness.

Unlike the familiar Vulcan first officer, this Mirror Spock is ruthless and self-serving. He does eventually help Kirk and his crew return to their universe, but only because it benefits him as well. This figure features nine interchangeable hands, ranging from phaser-holding grips to Vulcan mind meld gestures. Mirror Spock also has two attachable, magnetized phasers, a dagger and sheath, plus a weapon unique to the terrible Terran Empire: the agonizer. With these accessories, the alternate-dimension Mirror Spock makes sure his enemies neither live long nor prosper. 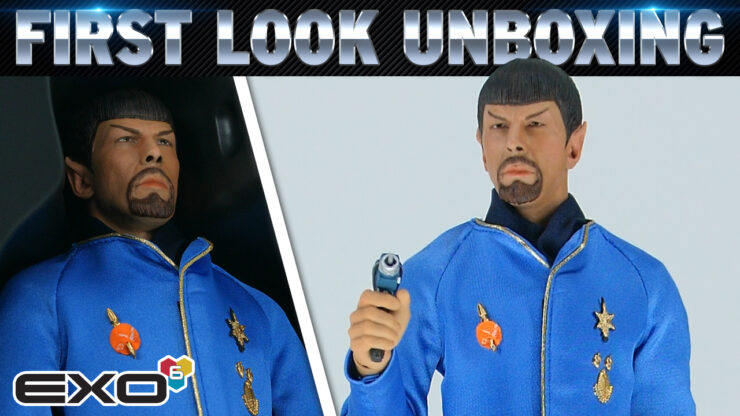 This collectible figure is just the first of EXO-6’s entry into the Mirror Universe, and a great addition to your EXO-6 Star Trek 1/6 scale figure collection. Visit the full feature page for more details on the Mirror Universe Spock Sixth Scale Figure.

For more Sideshow FIRST LOOK unboxings, visit our official YouTube Channel. Featuring fan-favorite and highly anticipated collectible figures from all your favorite worlds, this series is an essential guide for curious collectors! See all the latest sixth scale collectibles from manufacturers like Hot Toys, Threezero, Sideshow, EXO-6, and more.

Will you be adding the Mirror Universe Spock Sixth Scale Figure by EXO-6 to your figure collection? Don’t forget to Let Your Geek Sideshow and tell us in the comments!