In Star Wars™, our heroes get in a lot of fights. It says it in the title, of course. And unless they’re droids, these heroes are likely to bleed, lose a limb, or die due to their injuries. That’s where incredible sci-fi tech comes in.

A long time ago in a galaxy far, far away … they seemed to have some pretty advanced medical technology. Below, let’s look at the amazing ways our protagonists are saved and healed throughout the Star Wars films and television series.

The Empire Strikes Back

In The Empire Strikes Back™, Luke Skywalker™ encounters a wampa™ on Hoth™. Battered by the creature, Luke escapes only to suffer from hypothermia due to the planet’s harsh, snowy climate. When Han Solo™ rescues Luke, he takes him back to Rebel base. There, Luke is immediately submerged in a cylindrical container called a bacta tank™.

Although not explained in the movie itself, bacta tanks are filled with a fluid that promotes rapid healing. Luke Skywalker’s major injuries become instantaneously less life-threatening because he has access to this technology. Since he only spends a short time in the tank, however, he is still somewhat bruised when he’s released from intensive care. 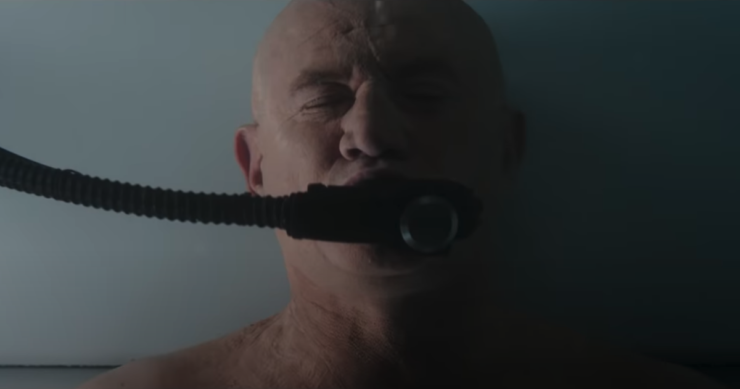 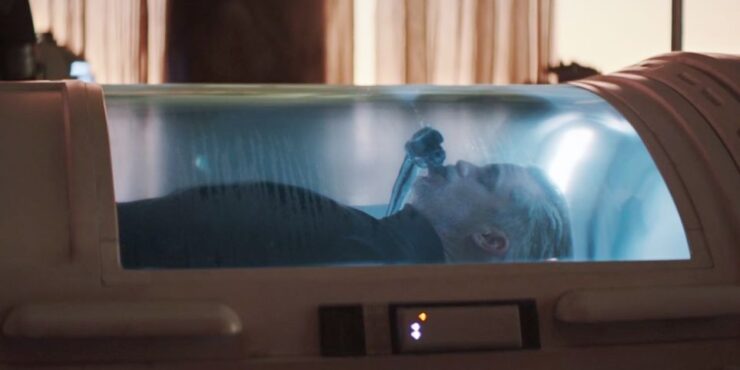 Bacta tanks return in The Book of Boba Fett™. The tanks are upgraded by the time Boba Fett™ uses them. No longer clunky and vertical, the sleek horizontal orientation allows the user to comfortably sleep inside. Boba Fett spends every single night in the tank recuperating from physical wounds caused by his time in Jabba the Hutt’s™ sarlacc pit™.

Although not shown onscreen, Black Krrsantan™ is offered the bacta tank for his battle wounds, implying the space is both portable and large enough for a wookiee™. The liquid inside the bacta tank is also capable of healing different physiologies, aiding in cell restoration regardless of species.

Finally, Cobb Vanth™ is shown resting in the bacta tank in The Book of Boba Fett finale. Previously, Freetown’s Marshal was severely wounded by bounty hunter Cad Bane™. The blaster wound in his upper chest immediately sends him into a coma. Now he’s recovering with the bacta along with help from cyborg modification — more on that popular technology later.

Bacta goes mobile in The Mandalorian™. During a particularly difficult fight, Din Djarin™ is injured severely while protecting Grogu™. Left for dead in a burning building, The Mandalorian™ is approached by the droid IG-11™, who explains bacta spray can be used to heal the open wounds on the Mandalorian’s face and throat. That little pressurized canister thus saves the Mandalorian’s life without him ever having to step foot in an entire tank. 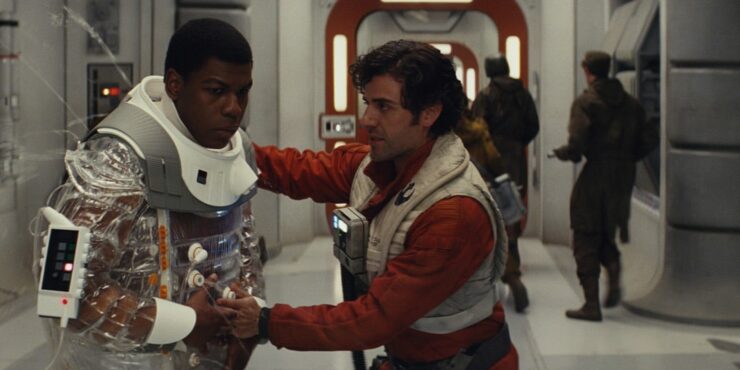 Like real medical technology, bacta tech continues to improve throughout the saga. In The Force Awakens™, Kylo Ren™ slashes Finn™ across his back with a lightsaber. Finn rests on a normal cot at the end of the film while Rey™ says goodbye, but in The Last Jedi™ Finn wears a flexpoly bacta suit. This emergency medical suit is transparent and filled with circulating bacta, which is directed by tubing and control panels on the outside of the clear material. While wearing the suit, Finn sleeps in a normal medical cot, showing that the patient no longer has to be completely submerged for bacta to work.

Boba Fett brings Fennec Shand to a mod parlor when the bounty hunter is at death’s door. She’s suffering from a blaster shot to the stomach, and needs vital organs replaced. That seems impossible … unless you have all the necessary tubes, wires, and tech to correctly imitate a living being’s internal mechanics.

Cyborg or droid modification involves putting cybernetic parts in place of organic matter. In The Book of Boba Fett, counterculture teens on Tatooine use modding as a form of self expression. Characters like Fennec Shand and Cobb Vanth, however, turn to it as a last resort in order to keep breathing.

The Empire Strikes Back

Synthskin, or synthetic skin, is an artificial covering that resembles human flesh. Medical personnel generally use synthskin patches for organic beings. It can be used for something as simple as fusing cuts, or something as complex as replacing an entire lost limb.

In The Empire Strikes Back, Darth Vader™ cuts off Luke Skywalker’s hand. Luke Skywalker gets a robotic replacement hand. He also opts for a synthskin cover to obscure the wires and paneling. Interestingly enough, Luke’s father — Anakin Skywalker™ — also lost a hand, though he decided to keep the metallic look with only a black glove to slip over it.

What do you think is the coolest medical technology in Star Wars? Let us know in the comments, and don’t forget to Let Your Geek Sideshow!