That’s right — Strike A Pose season 4 is back with its second episode, and it’s a great one! Plus, if you stick around after the episode there’s even more content to enjoy with an all new talkshow bonus stream. Get all the details below.

What is Strike A Pose?

Strike A Pose is Sideshow’s very own Sixth Scale Figure posing competition. The show takes three contestants and pits them against one another to create the best pose for their figure in just 10 minutes. The catch? Contestants have no idea which figure they’ll be posing until it’s revealed at the start of the episode.

Once the timer begins, our players race to display a masterpiece that will fall under the keen gaze of Master Poser Terry Smith. Terry judges poses based on creativity, character — for example, if it’s Batman, is that how Batman would look? — and composition. Once those points are tallied, a winner is selected. Winners take home bragging rights, PLUS the Sixth Scale Figure they’ve just unboxed and played with.

But they have to watch out for possible twists and challenges that can throw a wrench in their posing plans — the possibilities are endless!

Who is appearing in this episode? 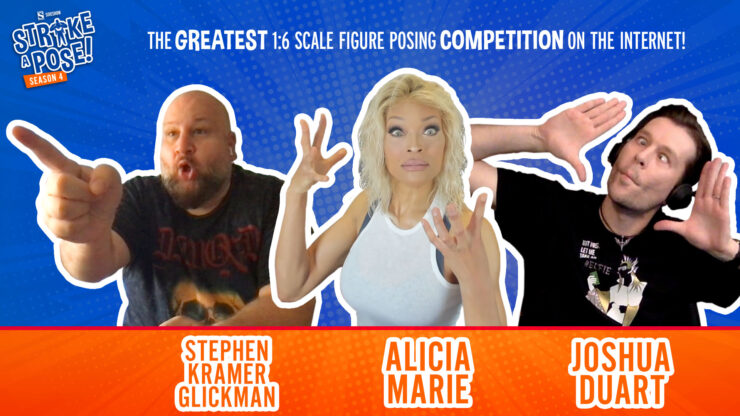 We’re so glad you asked! Sideshow is excited to welcome Stephen Kramer Glickman (podcaster, actor), Alicia Marie (cosplayer, fitness model), and Joshua Duart (cosplayer) to this competition show. Tune in to see some friendly ribbing, a healthy dose of competitive spirit, and lots of laughs as they battle it out for pro poser points.

Additionally, the episode broadcast will immediately be followed by a live post-posing talk show with the contestants and host Terry Smith. For the first time ever, viewers can take a peek behind the scenes at Strike A Pose as guests break down the episode, geek out about their own fandoms, and more. You don’t want to miss this!

When can I watch?

You can see the full schedule for Sideshow’s newest fall convention event on the New York Con 2021 Event Overview blog.

Where can I watch?

We’re streaming Strike A Pose to these official platforms:

Which guest do you think will win this Strike A Pose? What figure do you think they will be posing? Let us know in the comments, and don’t forget to catch the episode premiere at 4 PM PT on October 5!