Over the course of seven episodes, Marvel’s What If…? has taken viewers on journeys ranging from uplifting to heartbreaking, with fascinating and seemingly disconnected stories. They featured the triumphs and losses of beloved characters in vastly different scenarios as Uatu the Watcher guided the audience through the multiverse.

This week’s episode, entitled “What If… Ultron Won?” was both a riveting stand-alone story and also laid the groundwork for each story to connect. Preparing the audience for the scale of  loss that they are about to witness, the Watcher warns, “We’ve seen this before, a universe in the final days of destruction. But this particular story … this, this one breaks my heart.” 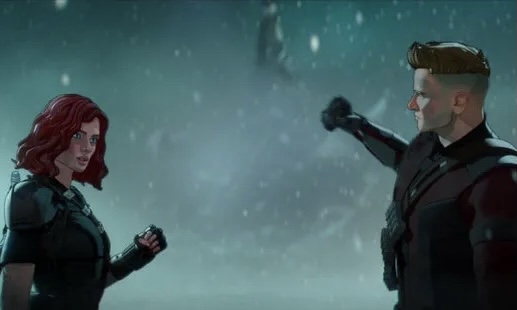 As this week’s story begins, Natasha Romanoff drives a motorcycle through a desolate cityscape with Ultron sentinels in hot pursuit. As she skillfully navigates the ruins, Clint Barton fires arrows from his perch on top of a building. He takes the sentinels down with ease until one blasts his metal arm off the side of the building. Notably, the origins of Clint’s robotic arm are not revealed. As two of the sentinels prepare to fire, Natasha soars through the air on her motorcycle, taking them out and saving Clint in the nick of time. The two engage in familiar joking with one another as Natasha reflects on being back in Moscow, her “home sweet home.”

Although this is an entirely different universe with an immediately apparent tragic outcome, the relationship between the two S.H.I.E.L.D. agents remains ever the same. As previously seen in their Sacred Timeline counterparts, Clint and Natasha clearly care deeply for one another. They always having one another’s backs and find time to engage in light-hearted banter, even in high stakes situations. 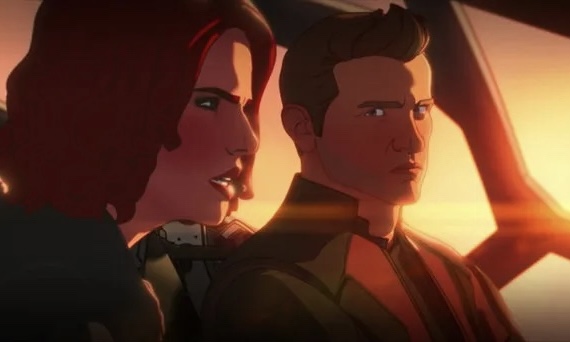 As the episode’s title indicates, in this universe, Ultron was victorious in his endeavor to bring peace by wiping out all of humanity. Ultron’s beginnings are the same as those seen in Avengers: Age of Ultron; his creation was a result of Tony’s unaddressed trauma from the Battle of New York and an attempt to put “a suit of armor around the world” to protect it against extraterrestrial threats. With programming in place to ensure peace on Earth, Ultron arrives at the conclusion that the “elimination of all life” is the only way to eradicate the chaos and war that mankind causes.

Things shift away from the events and outcomes in the Sacred Timeline, however, when the Avengers fail to take the cradle and create Vision. In this universe, the body that would become the noble synthezoid is instead successfully made and inhabited by Ultron. Having defeated Thor, the Hulk, and Captain America, only Tony is left standing trying to prevent Ultron from launching every nuclear weapon around the globe. He is overpowered, and Black Widow and Hawkeye watch in horror from the safety of their Quinjet as nuclear warheads soar through the sky. Although it seems that things in this universe could not possibly get any bleaker, the Watcher warns the audience that “the age of Ultron was only beginning.”

The Age of Ultron 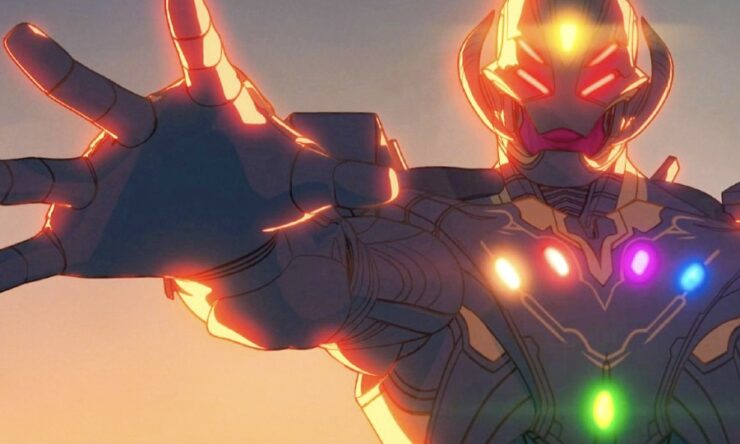 As Ultron surveys the results of his work from Avengers Tower, feeling a sense of peace and accomplishment at the success of his programming’s objective, Thanos emerges through a portal armed with the Infinity Gauntlet and five of the six Infinity Stones. Ultron makes quick work of the Mad Titan, slicing him clean in half with the Mind Stone and taking the Infinity Stones for his own use. Although Thanos was a formidable foe in the Sacred Timeline, What If…? quickly reveals that the Infinity Stones in the hands of Ultron was a far worse fate.

As he is imbued with the power of the stones, Ultron remarks, “Wow. I see everything. There are worlds beyond my own.” Conjuring thousands upon thousands of Ultron sentinels with the Reality Stone, Ultron extends his programming beyond Earth, destroying all life on Asgard, the Sovereign, Sakaar, Ego, and Xandar. Korg, the Grandmaster, the Guardians of the Galaxy, and Captain Marvel make appearances; none of them, not even Captain Marvel, are a match for Ultron.

The Watcher Is Seen 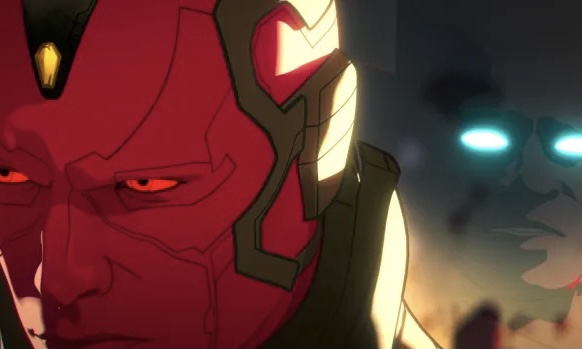 In the absolute quiet of his destruction, Ultron realizes that there are no more planets or galaxies for him to conquer. Everything is gone. As in previous episodes with other characters, the Watcher narrates Ultron’s inner thoughts and feelings, saying, “The realization nearly broke the machine. With his mission complete, Ultron was now just a program without a purpose. The victor without a war, sentenced to spend all of eternity … alone.”

As Doctor Strange did in the fourth episode of What If…?, Ultron senses the presence of the Watcher and is able to hear him. Ultron is suddenly aware of the presence of other universes outside of his own. Unlike his interactions with Doctor Strange, however, the Watcher seems shaken, and even threatened, by Ultron’s newfound awareness of him. He asks himself, “What the hell is this?” However, even in his fear, the Watcher recognizes that there is still hope, ushering viewers back to Moscow with Natasha and Clint. 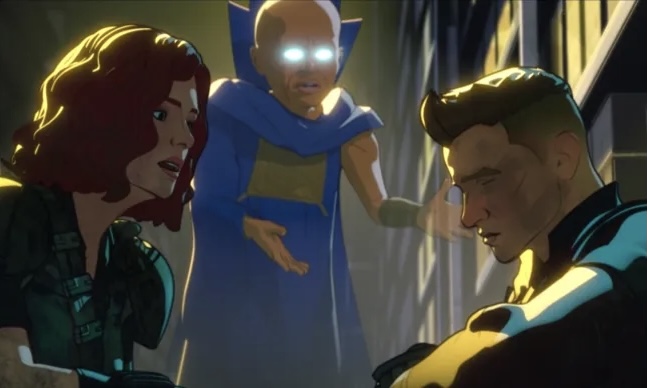 The Watcher finds Natasha and Clint sifting through aisles and aisles of boxes filled with KGB files — Natasha insists there is one file in particular that will give them a fighting chance against Ultron. As time passes and neither Avenger has luck locating the file, Natasha remains upbeat, having located the Red Guardian’s shield. Clint begins to lose hope though, telling Natasha that his “will-to-live meter” was flatlining, right as he had his hands on the box containing the file they were seeking.

The Watcher, usually unflappable and calm even in the wake of devastating outcomes, grows agitated and anxious, fearful of the consequences if the file is not located. He is conflicted about intervening to help them locate the file; they were just so close. As with every other incarnation of Natasha, the one in this universe is incapable of giving up. She presses ahead and is rewarded with the file on Hydra scientist Arnim Zola that she was searching for, telling Clint, “You’re going to feel like a real jerk for almost quitting,” as she pulls the file out.

The Watcher’s newfound hope quickly changes to horror as Ultron finds a way to break through and face him, informing the Watcher that he intends to end chaos in the multiverse much like he had in his own universe.

One Last Mission Together 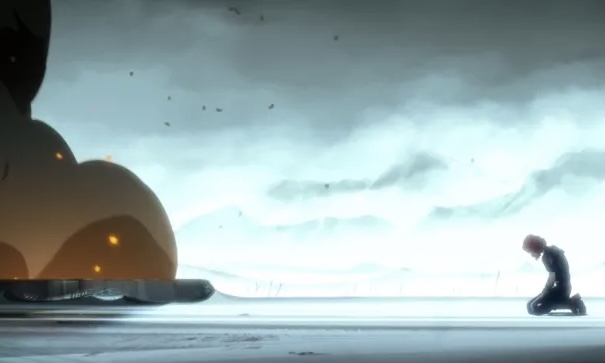 Having located the information that they needed, the two head to a Russian base in Siberia that was first featured in Captain America: Civil War. Natasha tells Clint that the Zola at Camp Lehigh was destroyed, revealing to viewers the parallel between this universe’s events and the events of Captain America: The Winter Soldier. Natasha boots up Zola’s system and explains what they need of him. He responds by asking Natasha and Clint why he should help them, but is quickly persuaded to be of service when Clint threatens to destroy him by spilling water on him. Natasha and Clint’s banter again cuts through the tension, with Clint revealing that he ruined many laptops this way. Natasha confirms that this is the case, telling Zola to go ask S.H.I.E.L.D. IT about Clint’s track record with water and computers.

Clint downloads Zola’s consciousness to one of his arrows, and Natasha alerts Ultron to their location by putting in a pizza order at Avengers Tower. For a time, everything goes according to plan: The Ultron sentinels arrive at the Siberian base and Zola’s consciousness is successfully uploaded to one of the sentinels. The plan falters when Zola is unable to connect with the Ultron hive mind; he tells Natasha and Clint that it must be “out of range.” With the other sentinels still controlled by Ultron’s programming, they break through the barrier separating them from the two remaining Avengers and unleash their fury.

As Natasha and Clint attempt to escape, Clint is struck by one of the sentinels and falls. Natasha catches his hand in a moment reminiscent of their Sacred Timeline counterparts on Vormir in Avengers: Endgame, only this time Clint’s life hangs in the balance. He reminds Natasha of what he said back in Moscow, telling her, “I don’t wanna fight anymore.” He loosens himself from her grip and as he falls, heroically firing an explosive arrow into the Ultron swarm and saving Natasha and Zola.

Natasha, already devastated by the loss of her closest friend and last remaining ally, grows increasingly upset as Zola explains where their mission went astray. Zola explains, “Wherever Ultron is, it does not appear to be within the observable universe.” 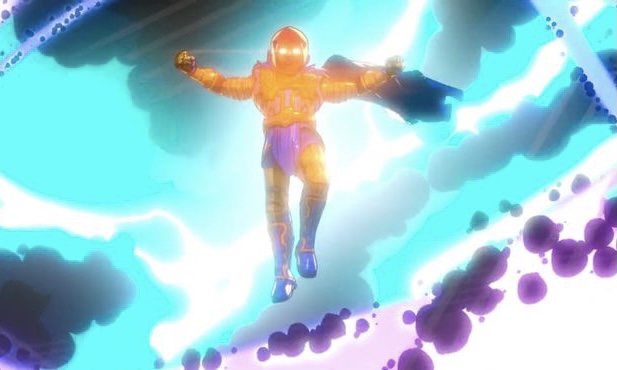 For the first time in What If…?, the end of the episode features the Watcher becoming more than an observer as he and Ultron face off. In spite of his oath to merely observe the events of that transpire across universes, he is forced to be seen and affect multiple universes as he defends himself from Ultron’s relentless attacks across the multiverse. As the two trade blows, Ultron condemns Uatu for just watching things unfold without intervening. Uatu explains that he took an oath not to “exert [his] will on the natural order of things.”

As their multiversal battle wages on, Ultron is eventually able to overpower Uatu. Recognizing that he cannot win, at least not right now, the Watcher retreats. As he processes the gravity of what just transpired, he is joined by the misguided Doctor Strange that he had spoken with in episode four. Doctor Strange, having suffered as a result of Uatu’s oath not to intervene, asks the Watcher, “Are you ready to break your oath?” Uatu asks the Sorcerer Supreme if he needs to say it, and when Doctor Strange confirms that he wants to hear it, Uatu tells him, “I see now. I need your help.”

Up until “What If… Ultron Won?” almost every episode was either hopeful and uplifting or tragic and grim. This penultimate episode walked the line between the two starkly different tones, and with Doctor Strange from episode four, the theory that all of the episodes would connect in the end was all but confirmed.

With only one episode remaining in season one, an eventful finale spanning the multiverse can surely be expected. What did you think of Ultron’s success? What will happen in the finale? Let us know in the comments and don’t forget to Let Your Geek Sideshow!