Please note the following article contains significant spoilers and plot points from episode six of What If…?

After last week’s zombie chaos, the latest episode of Marvel’s What If…? is a return to bringing together unlikely characters. Previously, Erik Killmonger and Tony Stark never crossed paths but this week’s episode asks, what if Erik had rescued Tony from the Ten Rings? However, even the most unlikely of pairs can prove to be counterparts, as “What If … Killmonger Rescued Tony Stark?” quickly demonstrates. Episode 6 also urges the audience to confront its definition of a villain.

Villainy has never been a clear-cut role, in any story. That’s what makes a villain compelling. If there was no reflection of ourselves in a villain, there would be no depth to the story — we wouldn’t fear them as much as we do. We’re drawn to what we fear, and Killmonger’s appeal is that in his ruthless “villainy,” the audience understands his motives. He fights for freedom, whatever the cost. Even in his original timeline, he can be considered an avenger who, like Tony, is driven by the memory of a deceased father.

Killmonger’s righteous anger strikes all the chords of a well-written antagonist. He commits violence without a second thought, he’s cunning and merciless, yet his actions also spring from a pain so universal that audiences can’t help but connect with him. 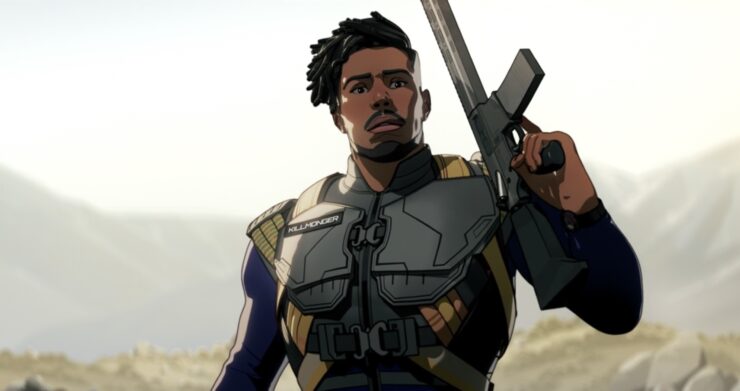 Tony Stark, in typical Tony Stark fashion, is making wisecracks when suddenly he and the soldiers around him are under attack. Ironically, Tony is put in danger by his own missile and it turns out the Ten Rings is behind this ambush in Kunar Province of Afghanistan. Fortunately for Mr. Stark, Erik Killmonger swoops in and throws the missile away before it can explode. Erik is, in this timeline, known as Lieutenant Killmonger.

As Killmonger and Tony walk away from the wreckage, The Watcher observes that “Heroes are not born; they’re forged in darkness.” Every hero’s journey is destined to be riddled with pain. It’s a necessary step in the trials of becoming a hero. Some darknesses, it turns out, have a tighter grip than others.

From the start, the episode’s exposition is full of foreshadowing, all found within the details of Erik’s background. At a press conference, Tony brings Killmonger on as Stark Industries’ Chief Security Officer. Killmonger was able to rescue Tony because he was operating deep undercover inside the Ten Rings, and he managed to uncover an assassination plot from Tony’s colleague Obadiah Stane. Killmonger exposes him to the public and Stane is led away as Tony promotes Erik to Chief Operations Officer. Pepper Potts, Tony’s voice of reason, looks on skeptically.

Pepper asks Colonel James Rhodes for info about Killmonger and Rhodey explains that Killmonger is highly decorated and has gained a respected reputation before “joining the SEALs as part of an elite ghost squad that specializes in high-target wetwork.” Apparently, wetwork is another term for assassinations. Pepper remains cautious of Erik’s sudden influence over Tony, telling Rhodes, “Everyone wants something.”

In this timeline, Killmonger’s father is still dead, though it doesn’t appear his death was at the hand of his brother, King T’Chaka. As they’re discussing weaponry in Tony’s lab, Erik reveals that he had a doctoral thesis to develop plans for an automated combat drone. Of course, Tony’s interest and pride is piqued and thus, Project Liberator is born. Jarvis helps Tony and Erik construct the Stark Liberator Drone but the team soon runs into the inevitable obstacle: finding a sufficient energy source. Though Erik’s rescue of Tony delayed the invention of the arc reactor, the duo finds their solution when Erik offers his ring of Vibranium. It turns out to be the perfect self-sustaining energy source for their combat drone.

Killmonger says his intention for the Liberators is to make human soldiers obsolete, ostensibly reducing human casualties. Tony’s remark that “Human pilots mean human error” evokes the same dilemma that Iron Man did: A machine can be more efficient than a human, but we must still consider who is controlling the machine.

Killmonger reveals his connection to Ulysses Klaue as a means to obtaining more Vibranium. Pepper voices her concern over dealing with a notorious arms dealer such as Klaue, so Killmonger suggests that Stark sends Rhodey to collect as a diplomatic cover for Stark Industries. During their negotiations in Klaue’s warehouse, Klaue shows Rhodey a Dora Milaje spear before opening a vault overflowing with Vibranium.

Suddenly, a security breach is detected and Erik is suspiciously not responding to Rhodey’s communications. Black Panther arrives on the scene, the cause for the security breach, and attempts to halt the smuggling deal. Killmonger emerges from the shadows and swiftly takes out Rhodey and T’Challa using a Stark sonic taser. With T’Challa’s lifeless form nearby, a dying Rhodey asks Killmonger why he’s done this. Killmonger replies, “Better question. Why wear the uniform of your oppressors?”

Rhodey, with his last breath, tells Killmonger, “Kid, you gotta be part of the system to change the system.” Killmonger disagrees as he stabs Rhodey: “Nah, you can burn it down.”

This scene presents Killmonger’s core dilemma with compromise. Perhaps it’s indicative of a generational difference in ideology when it comes to revolution. Is it better to assimilate oneself into a flawed system, reforming it from the inside out, or completely abolish an inherently biased system and start fresh? Erik’s nihilistic approach has its faults, but there are critical parallels between this conversation and the discourse we see happening in our own world. 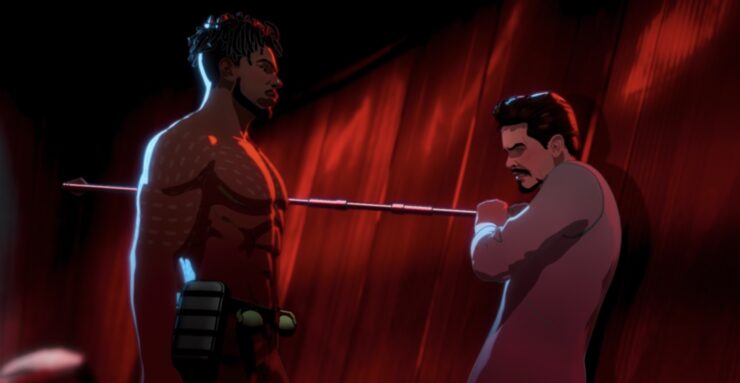 We next see heartbreaking funeral scenes for T’Challa and Rhodey, attended by their friends and family. In this timeline, T’Chaka outlives his son T’Challa. Killmonger, with the help of Klaue, begins his plan to infiltrate the Wakandan Royal Family.

During a confrontation back at Stark Tower, Tony knows about Erik’s double cross from Jarvis’ holographic security recording. When Tony tries to stand up to his former ally, Killmonger asks,  “What, you gonna ask Pepper to come and kill me?” Though Tony’s genius is unmatched by few others (more on that later), it remains a multiversal truth that Pepper is one of the pillars of strength behind Iron Man. Tony brings out the Liberator to stop Killmonger, but he quickly overpowers the drone before impaling Tony with a Dora Milaje spear.

Tony, like Rhodey, questions Killmonger’s motives, saying he doesn’t see the difference between the battle he’s fighting and the battle Killmonger faces — “Two gear-head orphans trying to do right by our fathers? We sound the same to me.”

Killmonger replies that the difference is that Tony can’t see the difference. It’s open ended as to what he means. He might be referring to their places in society, since a privileged white orphan’s experience is vastly different than a Black orphan with no generational wealth. Killmonger could also be referring to their visions for the future, and their approaches in making that future happen. Once again, the complexity of Killmonger’s motives forge him into the compelling character he is, no matter the timeline.

Killmonger frames Tony’s death on Wakandan retaliation for T’Challa, but Pepper sees through his deception. She questions the missing security footage, but she’s cut off by Killmonger’s gaslighting and the revelation that the U.S. military will now seize all Stark Industries assets to begin production of the mechanized soldiers.

Following this threatening turn of events, we see Klaue taking Erik to the border of Wakanda. When they pull up to the electromagnetic shield, there is a brief moment of innocent wonder, a look of genuine admiration on Killmonger’s face as he realizes he’s entering Wakanda. In that moment, he’s simply Erik. He whispers, “Wakanda. I found it, Dad.” Klaue, in the background, makes a comment about Wakandans being “savages,” a term that colonizers often label their victims with — Klaue doesn’t last beyond the end of his sentence.

Throughout the episode, notes of Ludwig Göransson’s Academy Award-winning score for Black Panther are present. It is exhilarating to finally return to Wakanda and the use of fula flutes and resonant talking drums brings the audience back to their seats in the movie theater, to the first time they viewed Ryan Coogler’s Black Panther.

Killmonger brings Klaue’s corpse back to the Wakandan capital and presents himself as N’Jadaka, son of Prince N’Jobu. Though Queen Ramonda and Shuri are apprehensive, T’Chaka welcomes his nephew with tears in his eyes. Killmonger and his uncle bond over shared stories about watching the Wakandan sunset and T’Chaka remembers his deep love for his brother. Later, Shuri figures out that the drones operate on a hive matrix for maximum strategic efficiency, meaning they’re all connected to the same operating network. Killmonger suggests letting the drones past the forceshields so their network connection to the Jarvis AI can be disconnected.

There’s a distinct parallel between the climactic battle of this episode and Avengers: Infinity War, with legions of valiant Wakandan warriors shouting “Yibambe!” as seemingly unstoppable invaders must be allowed past the country’s electromagnetic shields. After the Liberators’ connection is severed, Killmonger brings them back online with a back up transmitter, which he conceals from everyone else.

What follows is a breathtaking fight sequence led by Queen Ramonda, Okoye, and the Dora Milaje. The Queen is also a general of the Wakandan army and she leads her people lit only by moonlight and the glow of destructed drones. In a brilliant, battle-winning move, Ramonda finishes off two of the last drones by casting her spear through them, leaping atop their wilting frames, and raising her spear above her head as she triumphantly yells, “For T’Challa!” Again, the What If…? series proves itself to be a beautiful tribute to Chadwick Boseman’s memory.

After the battle against the Liberators is won, Killmonger finally gets to see the Wakandan sunset from atop Mount Bashenga. T’Chaka approaches and in their exchange, we’re offered another glimpse into the heart of Erik’s motives: an all-consuming desire to connect with his homeland, Wakanda. That and to be the Black Panther.

Once Killmonger partakes in the Black Panther initiation ritual, he is greeted on the ancestral plane by T’Challa. The former Black Panther asks Killmonger if it was all worth it, the betrayal and the bloodshed, compelling his cousin to consider whether suffering can be cured by more suffering. Killmonger responds that the cure to suffering is power, and now he has the power.

T’Challa, in his innate wisdom, replies, “Power, unearned, can be a very volatile force, cousin.” Meanwhile, back at Stark Tower, we see that power beginning to unravel. Shuri pays a surprise visit to Pepper in her office. Shuri, through her own innate genius, presents Pepper with proof of Killmonger’s betrayal and proposes a plan to team up and take Killmonger down.

Erik Killmonger is one of the MCU’s greatest antagonists. Villain doesn’t feel like quite the right word, after all, because in Erik, there’s more than killing and deception and anger. He has a tragic flaw that many of us can understand, and that’s living with an insurmountable darkness. In his final scene from Black Panther, Erik tells T’Challa that “death is better than bondage.”

Earlier in this week’s episode, Erik calls Tony a villain because he doesn’t trust anyone, yet Erik is guilty of the same. He tries to end his people’s suffering through causing more suffering. This horrible irony is best summed up by Audre Lorde, who wrote, “The master’s tools will never dismantle the master’s house.” Erik never quite overcomes his darkness. But then again, what if … that darkness is justified?

Who do you think is most worthy of the Black Panther title? Let us know in the comments and don’t forget to Let Your Geek Sideshow!