Today we move away from film and into the realm of comics and super-heroes for our next murdering madman-foe of Spider-Man and frightening symbiotic psychopath, Carnage! 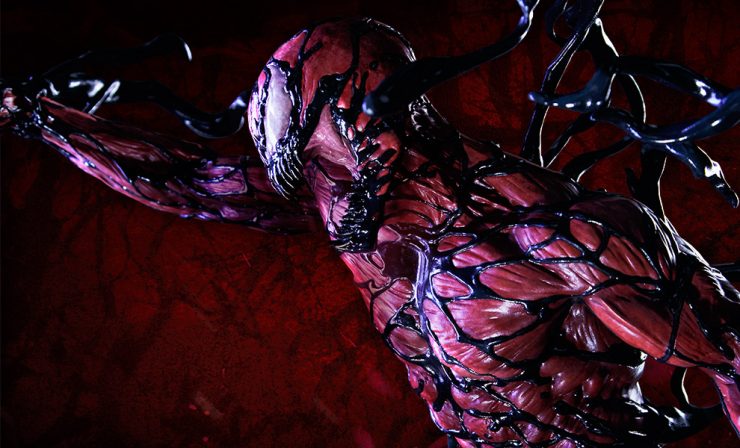 Some villains have tragic beginnings or do bad things because they feel they have no other option. Cletus Kasady is not one of these villains. As a small child, he discovered he liked killing people, and as he grew, he became very, very good at it.

Kasady was eventually caught after several years of murder, and as luck would have it, he ended up sharing a prison cell with Eddie Brock, A.K.A. Venom.

When the Venom symbiote arrived to break Eddie Brock out of prison, it left a small offspring behind. This alien offspring bonded to Cletus Kasady’s blood and turned him into the terrifying Carnage. With his newfound power and lack of conscience, Carnage began an indiscriminate killing spree across New York, murdering anyone unlucky enough to be near him.

Carnage is a monster with devastating abilities, and far too many powers to list in this tiny space. The symbiote itself has merged with his blood at the cellular level, so the two beings have essentially become one. This has given Kasady super-human strength, reflexes, and agility. He is immune to most damage, however if you do manage to hurt him, he will heal and regenerate rapidly.

Additionally he can shape-shift and transform his appendages into weapons, most commonly, bladed weapons such as spears, axes, swords, etc. These are just some of things he can do, but no one knows for certain the true limits of the symbiote’s power.

Just like Venom’s symbiote, Carnage is vulnerable to both fire and sonic based attacks. These will stun or even knock out the alien parasite long enough that you can try to incapacitate the man underneath the monster. Without his alien buddy, Kasady is just a normal man, albeit a very dangerous one. Keep in mind he was a seasoned serial killer even before having an alien bonded to his blood.

Carnage has slaughtered hundreds, if not thousands of people. If he wants to get you, chances are he’s going to get you. If you keep a flamethrower handy at all times, you may stand a chance to survive until Spider-Man shows up to save your behind.

You won’t need your friendly neighborhood Spider-Man to subdue this alien monster for your collection. Grab your own Carnage Premium Format™ Figure from Sideshow on our website. You can also check out Venom, Spider-Gwen, and even ole’ web-head himself!

Check back tomorrow and everyday till Halloween for another horrific Spooktacular monster or maniac profile.  If you missed Day 4 of our countdown, click HERE.