Nine Days of Maniacs, Monsters, and Madmen- Day 4: Pinhead and the Cenobites

Today’s monsters come direct from the mind of Master of Horror, Clive Barker. 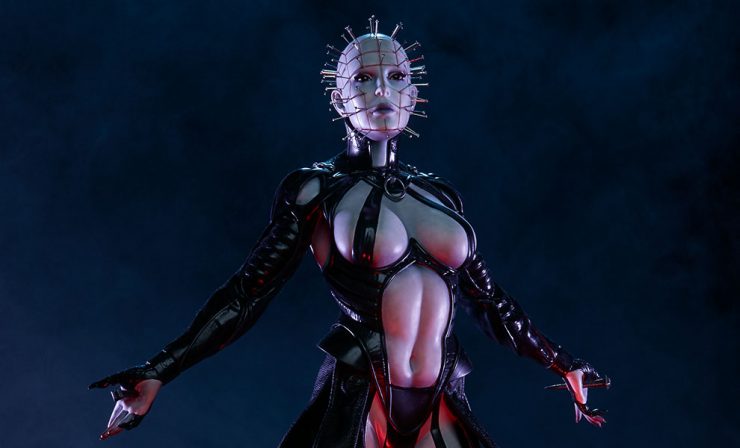 Hailing from the dark dimension of Hell, the demonic Cenobites serve in The Order of the Gash, which practices sadomasochism with a hedonistic flair. They can take many forms, but most use the characteristics of humans with extreme body piercings and/or mutilations. Their garments are a cross between religious robes, leather fetishism, and something a butcher would wear to a slaughter.

They are capable of traveling between dimensions via portals that rip through space and time. This usually occurs when a human fiddles with an unearthly artifact, such as the Lament Configuration puzzle box. Anyone who opens the box is dragged forcibly into the Hell realm with hooks and chains, where they are then subjected to intense physical and psychological tortures.

The Cenobite referred to by fans as “Pinhead” is a Hell Priest in the Order of the Gash. His personality and motivations vary from film to film, and range from extremely amoral to downright sadistic and evil.

It would probably to easier to list powers Pinhead doesn’t have. He is nigh-invulnerable to physical attacks and pain, and can teleport across great distances in an instant. He can read minds, create illusions, and summon objects out of nothing. His favorite form of attack seems to be through the use of chains and hooks that he can telepathically control to rip apart and torture his victims.

None. Your only hope of survival is to bargain with him and hope he accepts your deal, or try to send him back to the Hell dimension via the Lament Configuration.

We have such sights to show you. Direct from the extra-dimensional realms, you can pre-order the beautiful yet deadly Cenobite Hell Priestess Premium Format™ Figure right now.

Check back tomorrow and everyday till Halloween for another horrific Spooktacular monster or maniac profile.  If you missed Day 3 of our countdown, click HERE.

Speak Like a Soul of the Underworld with #WispwordWednesday