Today is Halloween, and what better way to celebrate this skin-crawling season than to take a look at some of the monsters that haunt your dreams and send chills down your spine.

Each day we have been diving into the realm of a different master of horror, finding what makes them tick, and how you can attempt to survive should you happen to encounter them… Sadly, those odds are not in your favor.

For our final Maniacs, Monsters, and Madmen profile, we wanted to stick to something a bit closer to home. Or rather, a bit closer to the Underworld city of Illverness, home to the Court of the Dead… 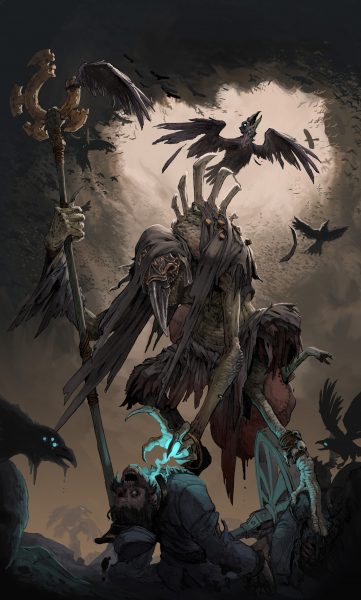 Name: Poxxil
AKA: The Scourge, The Pain Eater
Classification: Flesh Faction
First Appearance: The Court of the Dead: Chronicle of the Underworld
Location: Illverness

Everyone knows the reapers collect souls that have shuffled off this mortal coil … But did you know there are different flavors of these horrific soul-snatching terrors? Poxxil is a scourger reaper, which means he hunts the slippery mortals who have somehow evaded the harvest on the battlefield, or at the hospital, or anywhere else the dearly departed gather before they move on.

But Poxxil does not just to collect souls, he also scavenges and feeds on any fleeting bits of ethereal emotional energy that linger deep within their souls. Pain, misery, fear… these are what Poxxil craves.

A terrifying creature, he skulks behind an ornate bird-of-prey-like plague mask. Poxxil’s limbs are long and gaunt; his body hunched and bent in unnatural ways. Wounds, boils, and cuts ravage his body and cause intense pain with each movement he makes. Who could have inflicted such damage on a powerful reaper, you ask? The answer may surprise you.

You see, Poxxil feeds on pain and suffering, not just from the lost souls he finds, but also from casting powerful necromantic spells upon his own flesh with a masochistic delight. When this isn’t enough, he is more than willing to inflict that same pain on others as he sees fit.

A member of the faction of Flesh, Poxxil is able to wield devastating necromantic spells to cause excruciating pain and plague-like illnesses. He can detect even the faintest whiff of pain, suffering, or fear, and once he has locked onto you with those keen senses, it is only a matter of time before he finds his quarry. I would say you should pray he never discovers you, but it wouldn’t do much good…

Poxxil is his own worst enemy. Like all those who dwell in the Underworld, the temptation of the dreadsgrip – an overwhelming thirst for power and destruction – calls to him. Should he ever give in to its siren song, he would loose all sense of his self and become a senseless raker – a being of pure hunger and greed. If you thought him scary to begin with… *shudder*

If you meet Poxxil, you are already dead. There is no hope…

Poxxil and the rest of the Court of the Dead are just dying to meet you. Visit them at CourtoftheDead.com to find out which faction you belong to in the Underworld.

Ready to start your own Court of the Dead Collection? Good. This way please…

Happy Halloween everyone! We hope you have enjoyed these daily profiles as much as we have. Be sure to join us on social for some Halloween fun, share your costumes and let your #SpookySideshow!

Poxxil Court of the Dead
Write or view comments

The First Order Stormtrooper Arrives to Crush the Resistance

Mortighull: The Risen Reaper General Emerges from the Underworld