Hello again, fellow sixth scale aficionados! Time to announce the victor of “Victory,” the most recent prompt for Sideshow’s Pose of the Day Challenge!

I legitimately spent the better part of the day deliberating this one. More people are entering the competition now, and the entries continue to be delightfully entertaining. There was so much originality exhibited in the field today that it made the choice even harder. Ultimately, each of the three poses listed below held a very unique interpretation of the “Victory” prompt, and there were even more that, sadly, had to be left on the editing room floor (so to speak).

So, yes…thanks to all of you, not just for having the guts to enter, but for keeping it fun and funny, interesting, and a real challenge to judge. I’m already looking forward to the next prompt!

Now…on to the judging! 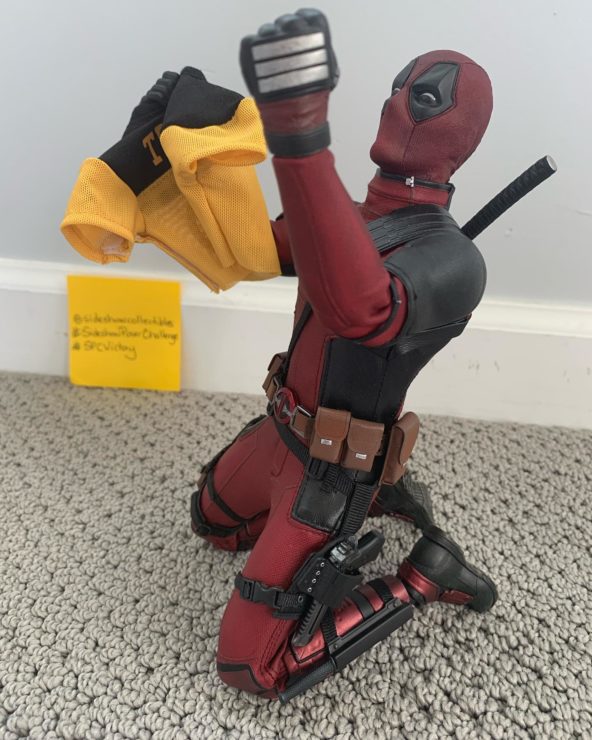 The first Honorable Mention goes to my3deadpools for this hilarious homage to Brandi Chastain’s iconic moment after clinching the final for the U.S.A. in the 1999 Women’s World Cup.

When I realized what you’d created here, I laughed SO loud that it spooked my dog. Absolutely delightful, m3d! Also worthy of Honorable Mention is this hilarious image by solidsnakefan depicting a captive Dean Winchester, wrapped up in webbing while a triumphant Spider-Man snaps a mocking selfie…one assumes for some online shaming.

I loved the originality of this idea, as well as the previously-unseen (at least by me) mashup, the childlike glee in Spidey’s posture, and even the composition of the photo. As I’ve said before, this isn’t a photo contest…it’s a posing contest! And the clear winner of this challenge is…chrishager82, for this fantastic fantasy of FN-2187 himself, Finn, triumphing over his nemesis, the ruthless and cowardly Captain Phasma…with a lightsaber!

Never happened, but should o’ happened, right Chris? Textbook posing on Finn, and I have to say that it takes guts to pose a figure lying on the ground. Always one of the hardest things to do.

Thanks again to all who participated, and stay tuned. Another prompt for the Pose of the Day Challenge drops tomorrow, Friday, April 10!

The Mandalorian: Everything We Know About Season 2 of the Disney+ Star Wars Series