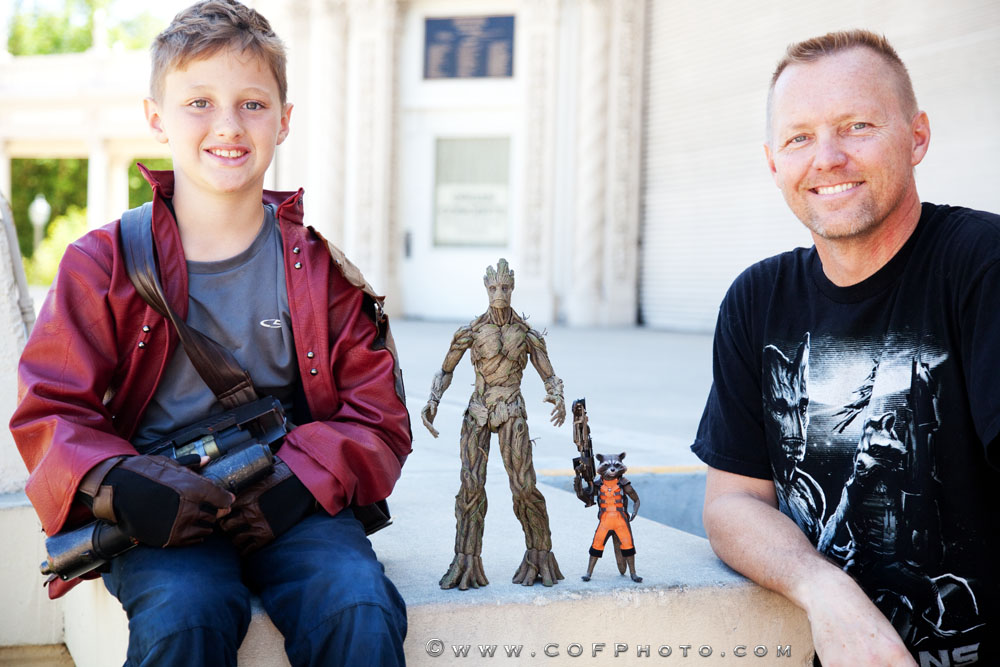 Be honest – you totally cried when Groot said “We…are….Groot.” I know I did. How could a tree that says only five words the whole movie make you cry? Because Guardians of the Galaxy was that good. It’s one of those rare super hero movies that was just loved by everyone, and to celebrate the universal success of the film, Hot Toys has made several figures – with hopefully more to come.

Today Gavin and I are reviewing the Groot and Rocket figures. To give an idea of size and proportions, we included photos of them with the Hot Toys Star-Lord figure as well, since he is more of a standard sized 1/6 scale figure. 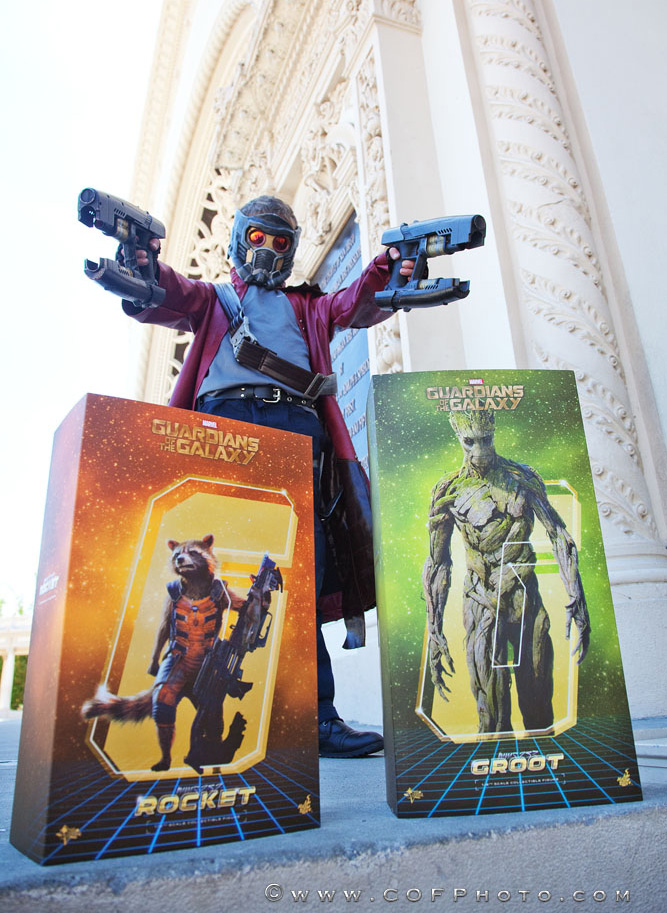 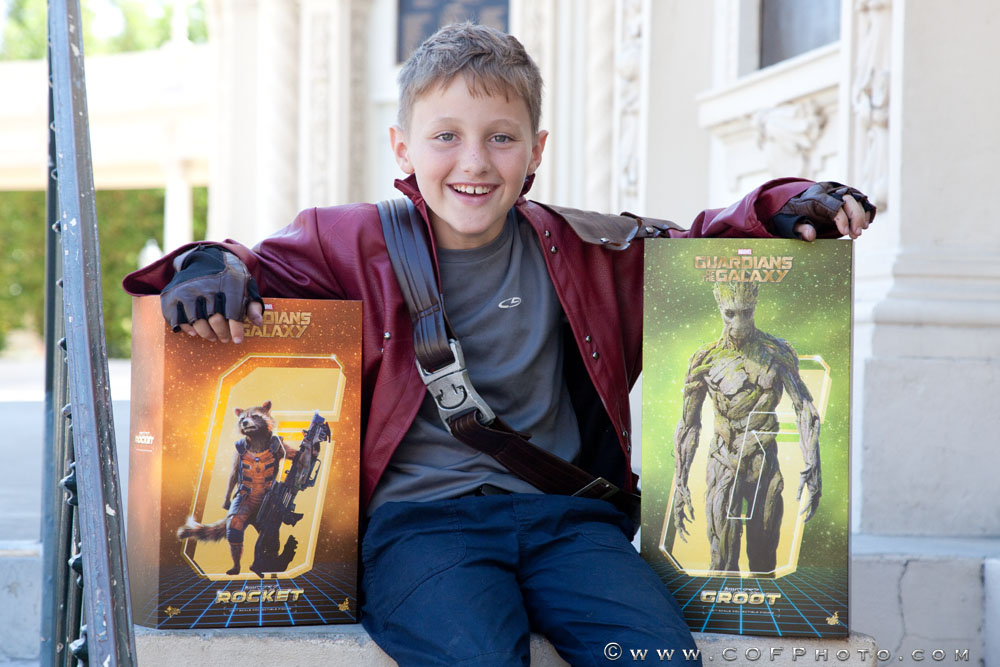 Groot is big, and very heavy with large feet for stability. He has no problem at all standing without his base and pole attached. In fact, not only is he sturdy enough to carry Rocket around, he can even easily carry Star-Lord on his shoulders (Rocket is not amused). 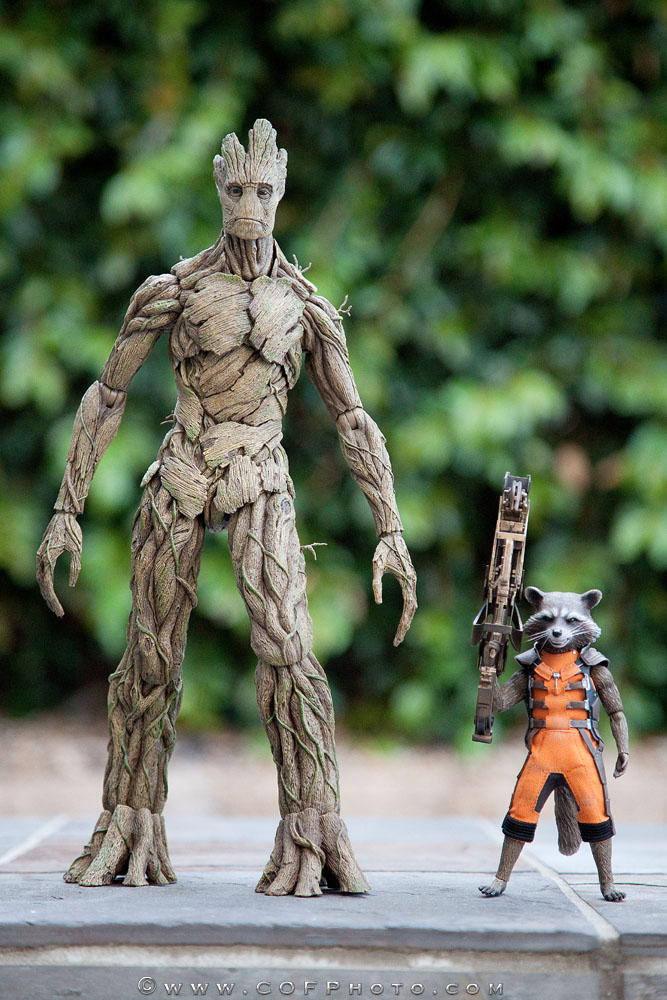 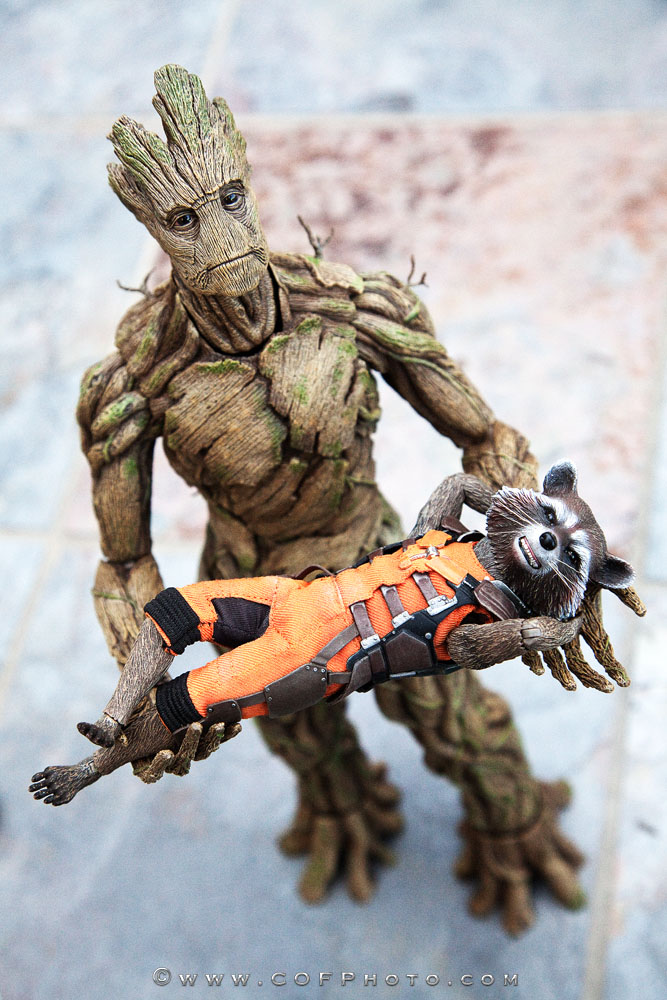 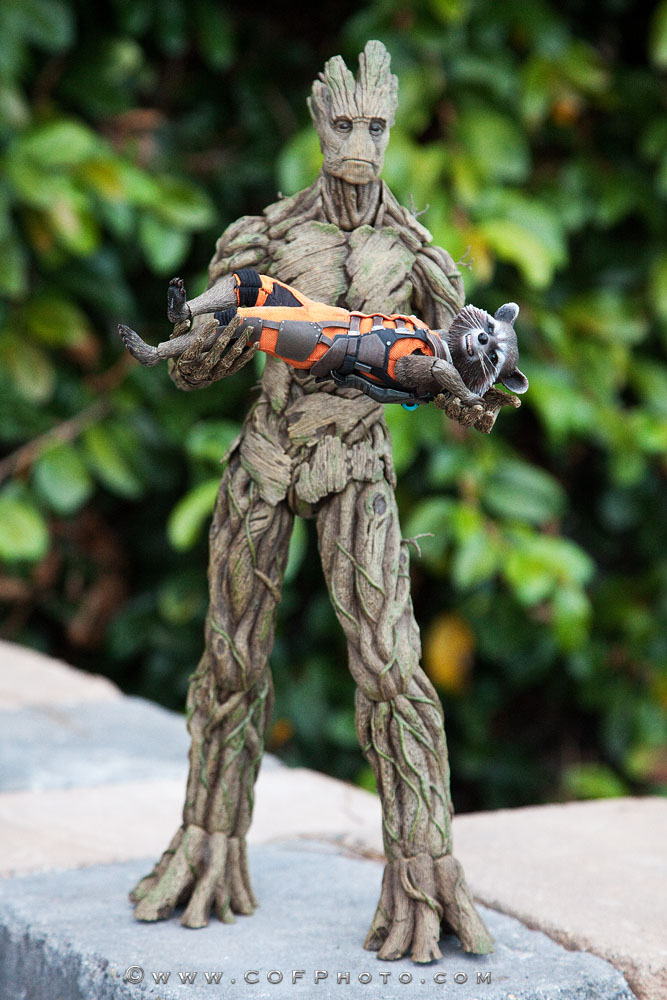 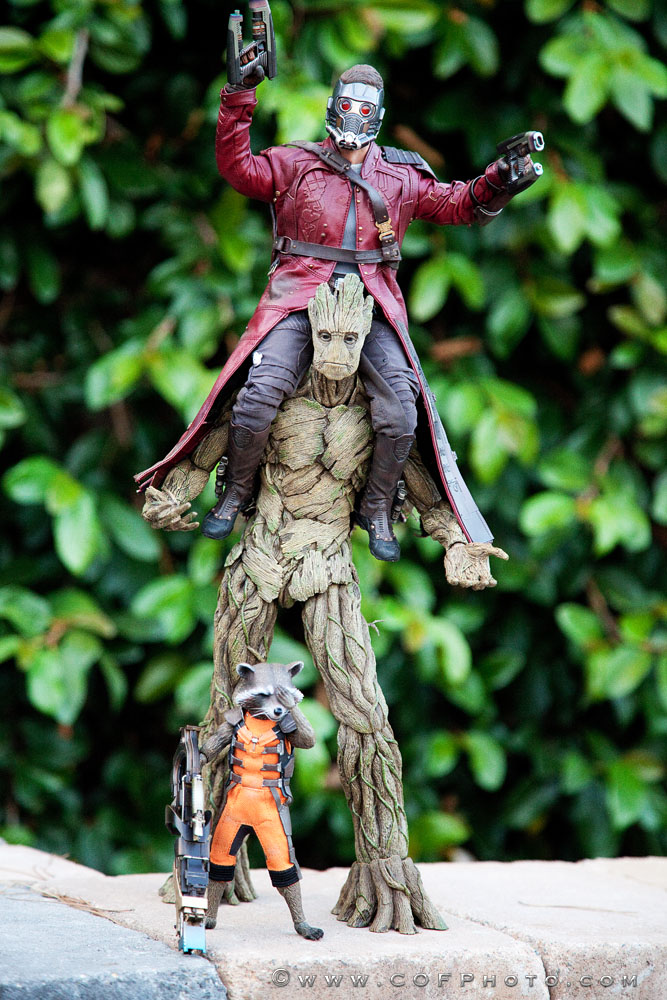 Collector’s Tip: If you do use the pole and the black clip for added stability, be careful. Groot has a small twig sticking out of his side right where you might want to attach the clip around his waist. Be gentle! 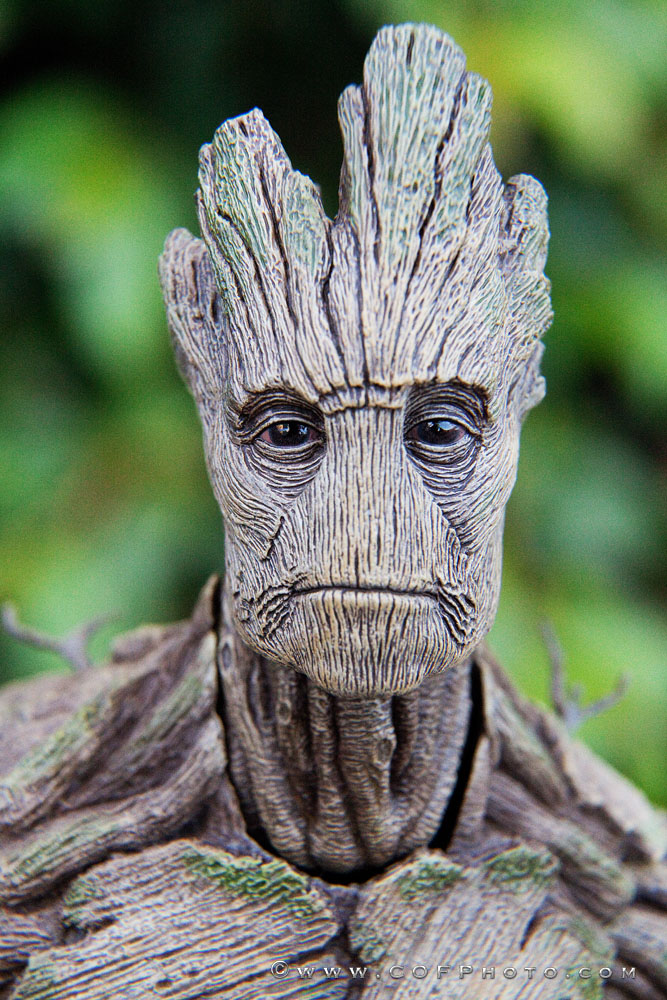 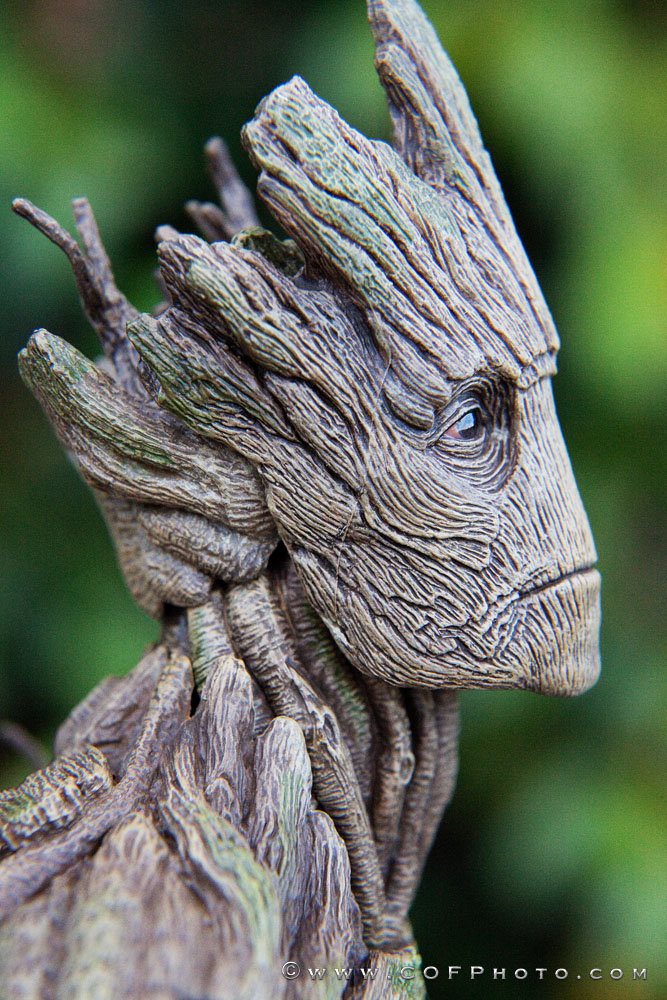 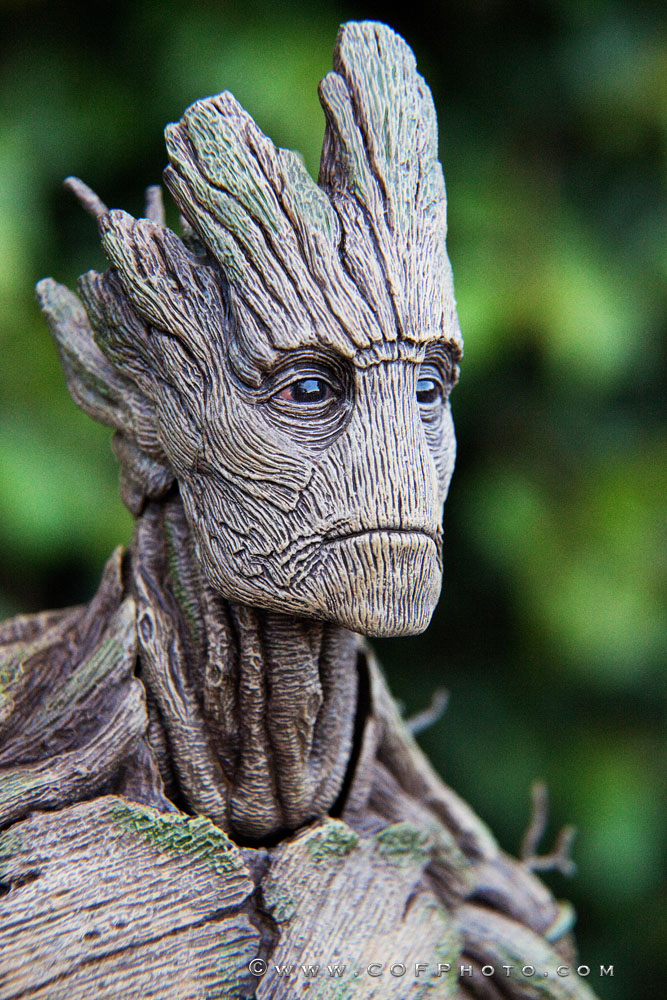 The minute details that cover every bit of this figure are just beautiful. The face, and especially the eyes, are completely alive and 100% Groot. As one would expect, Groot doesn’t come with much in the way of accessories (although if you pick up the Sideshow Exclusive two pack, you’ll get a second face, along with an adorable little potted Groot). But Groot doesn’t need accessories, because…you guessed it…He is Groot!

But where would Groot be without his little companion, Rocket? Rocket of course comes with his BFG (I’ll just assume that you know what that means) and looks exactly like the character from the movie poster. His suit is completely detailed and the gun is painted beautifully. 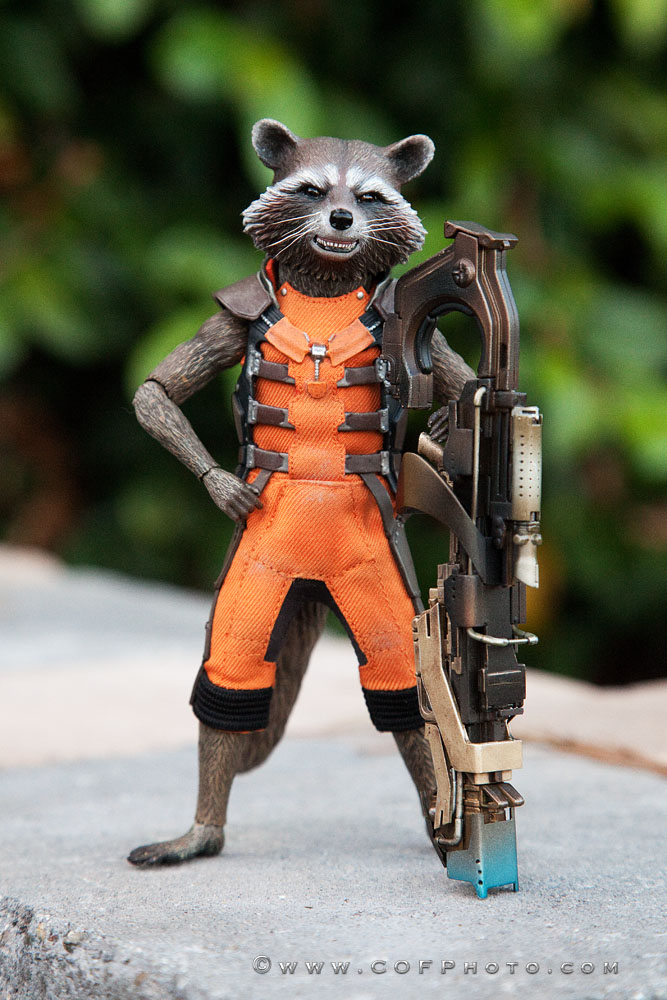 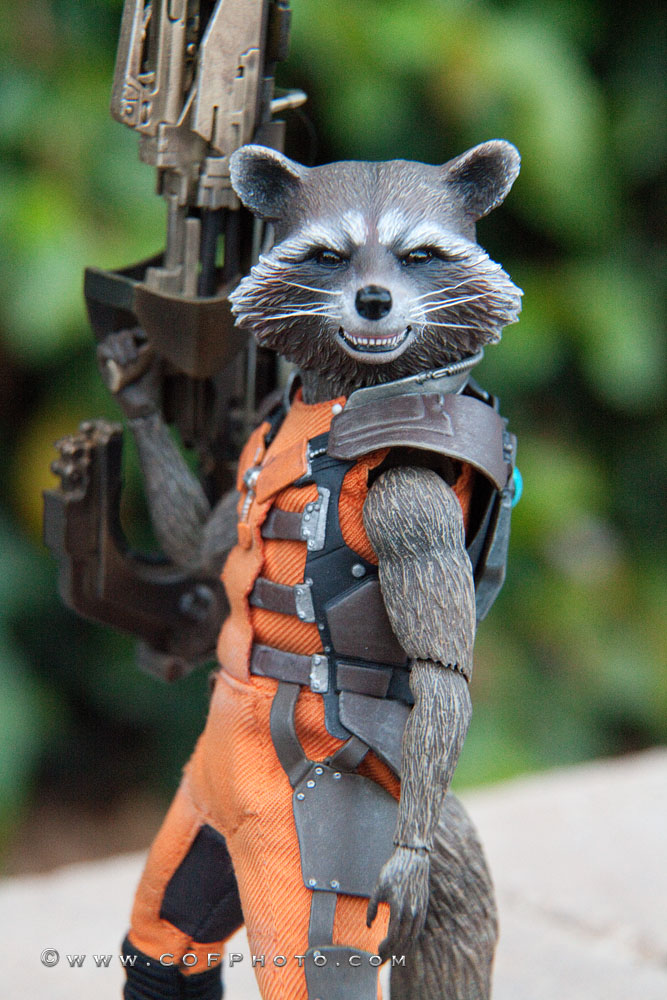 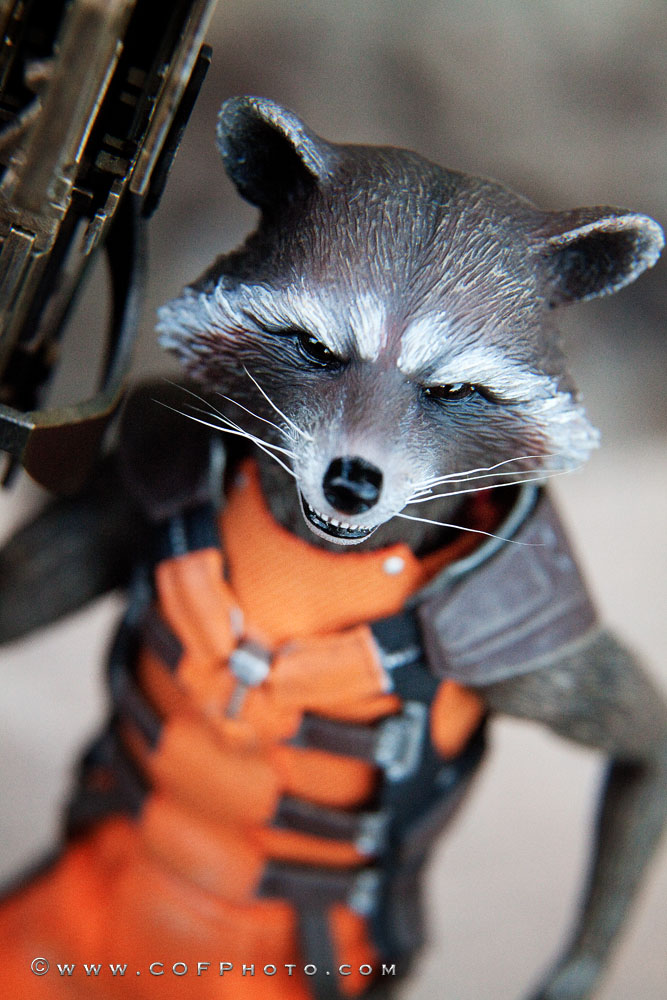 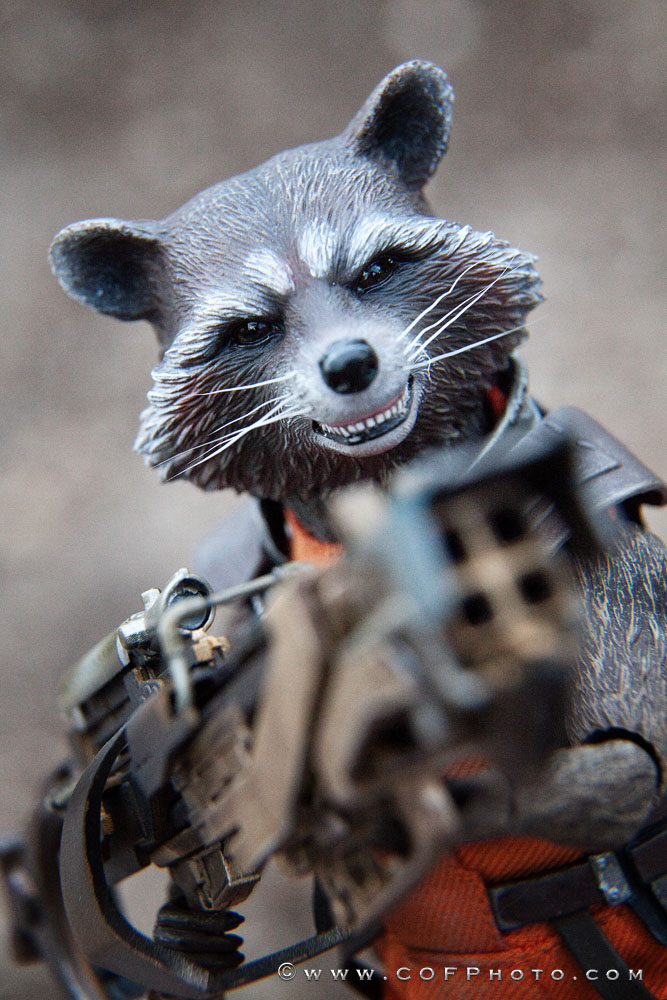 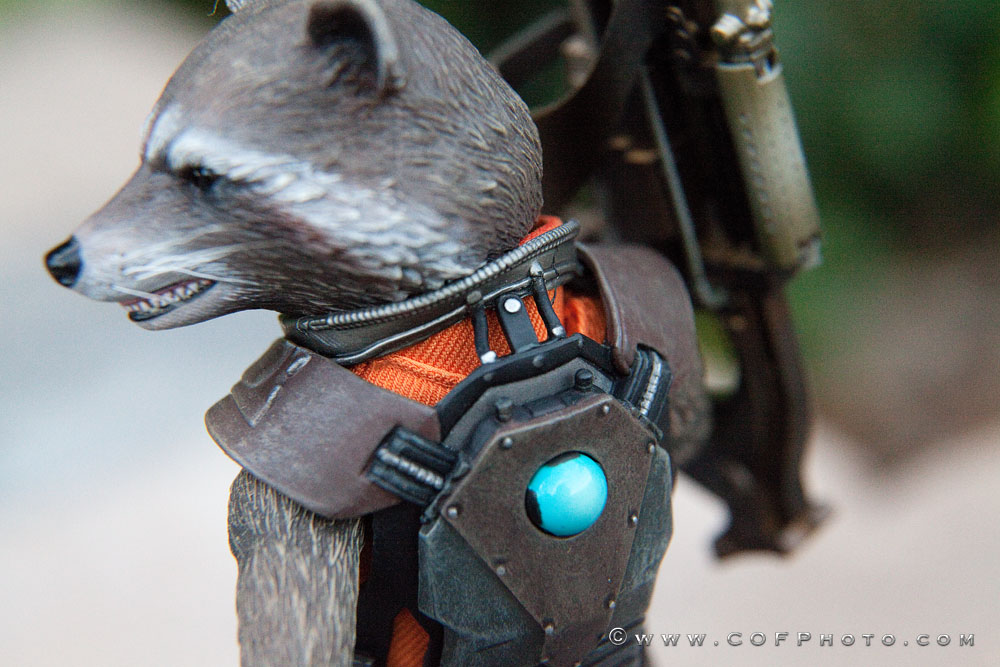 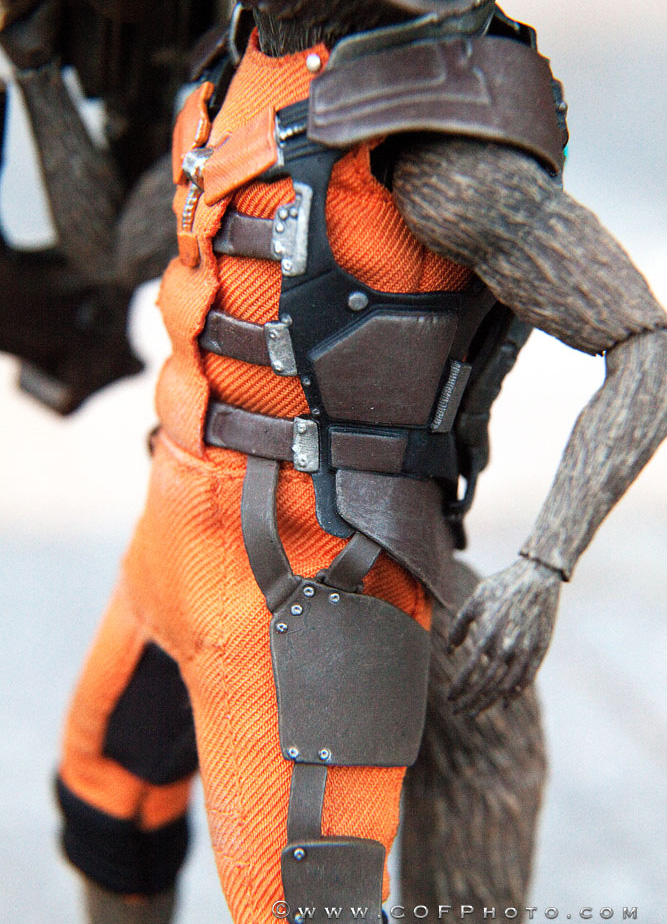 While Rocket also doesn’t come with much in the way of accessories, Gavin and I felt like Rocket IS Groot’s accessory, and vice versa. I can’t possibly imagine anyone buying one figure without the other, and the true fun in owning these figures is posing them together. We had a blast coming up with different poses, and bringing in Star-Lord for some of the fun. 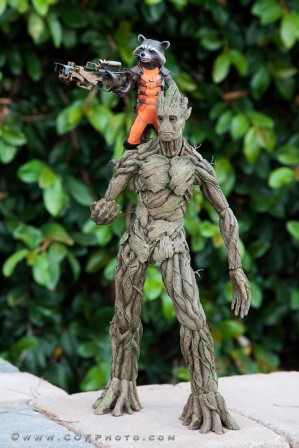 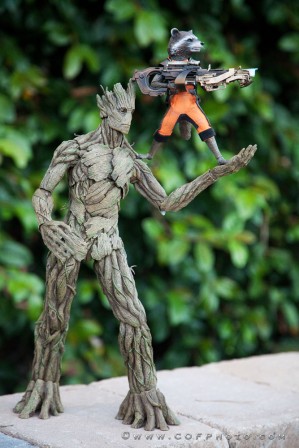 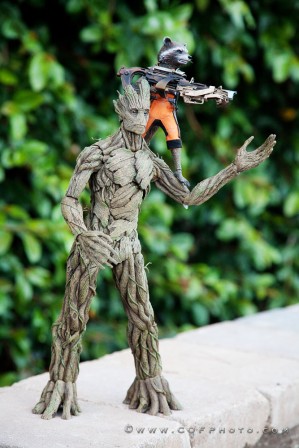 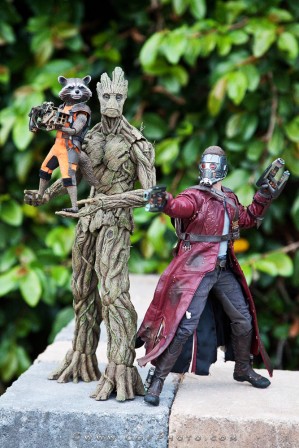 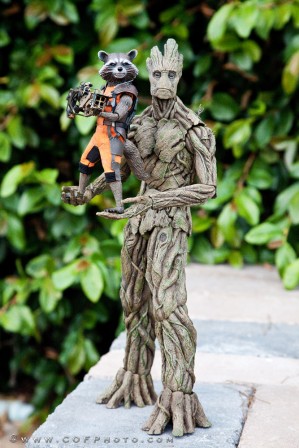 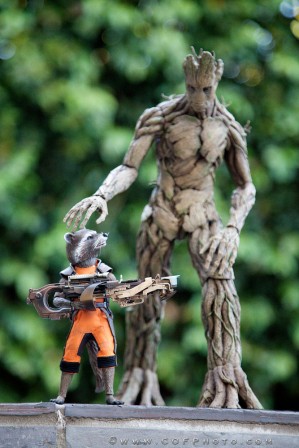 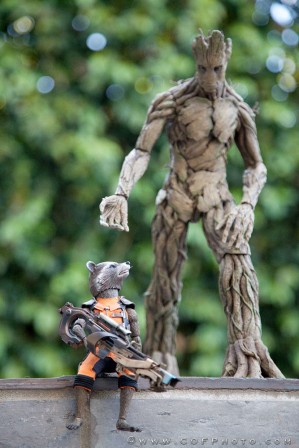 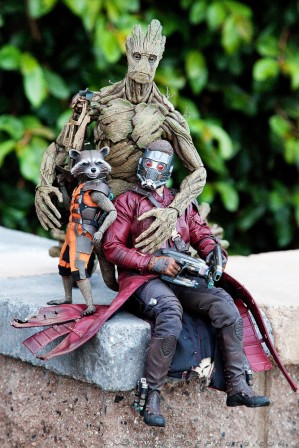 Collector’s Tip: Getting Rocket to stay on Groot’s shoulders isn’t terribly easy, but with a little patience it can be done – in a few different ways, actually. We tried to show a few different examples in our photos. It does help if you put one of Groot’s big feet forward, and lean his torso forward as well so that his back isn’t so upright. Use one of Rocket’s hands as well as his tail to help balance and stabilize him on top of Groot. It’s definitely worth the effort and looks totally amazing!

We hope you enjoyed our review and photos of these two amazing figures. I can’t imagine they’ll be available too much longer, so get yours from Sideshow while you still can! 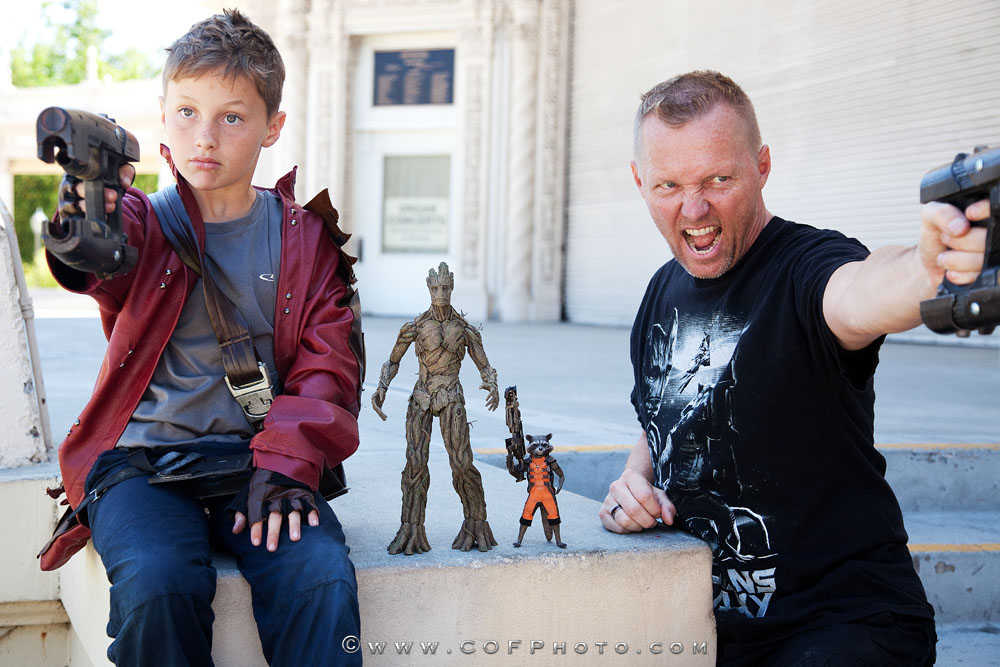