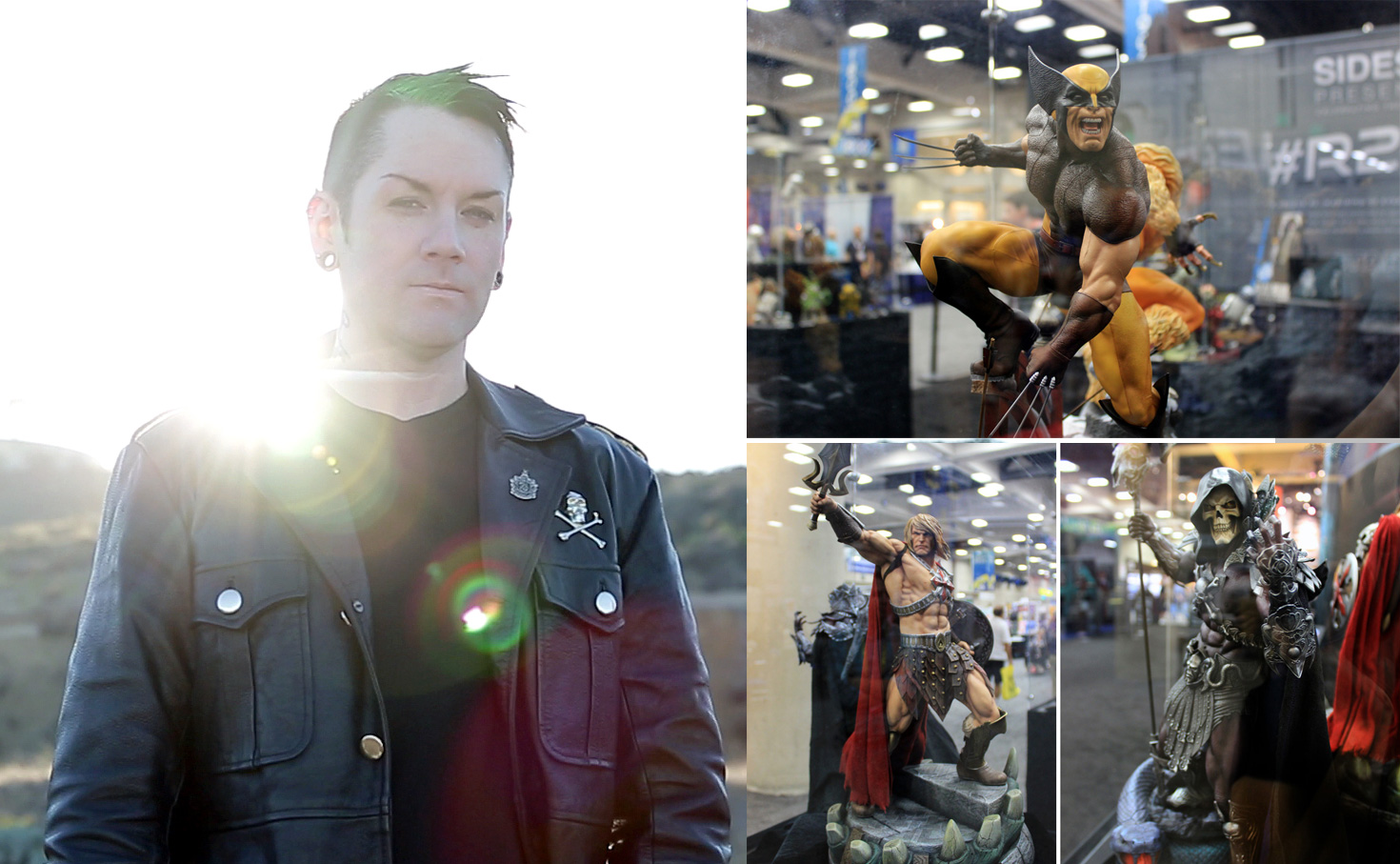 Remember the He-Man statue we brought to San Diego Comic-Con? How about the Heath Ledger Joker statue? Or our awesomely feral Wolverine that just went up for pre-order? If you caught any of those – and many more that were on display – you’d be admiring the work of sculptor Matthew J. Black.

From Newsbox.com, our friendly neighborhood jman caught up with Matt recently to discuss some of his most recent work on display at Sideshow’s booth during SDCC.

jman: Matthew, thanks for taking the time to answer a few questions. I’d like to start off with San Diego Comic-Con. Tell me a little bit about the work you’ve done for Sideshow’s Court of the Dead line. You designed and sculpted Oglavaeil the Executioner. What is the story behind the character? According to the site, the statue is fairly massive: over 2 feet in height, weighing 20 pounds. What’s it like seeing a design come to life like that?

Matt Black: Oh, Oglavaeil! Yeah he was a tough one. This piece was a real collaboration between me and Tom Gilliland. We had some AMAZING concepts from Amilcar Fong as a starting point, but much of the creation was kinda thought up on the fly. Tom had a great description of the character, that combined with the other worldly art of Amilcar helped shape him as a being. 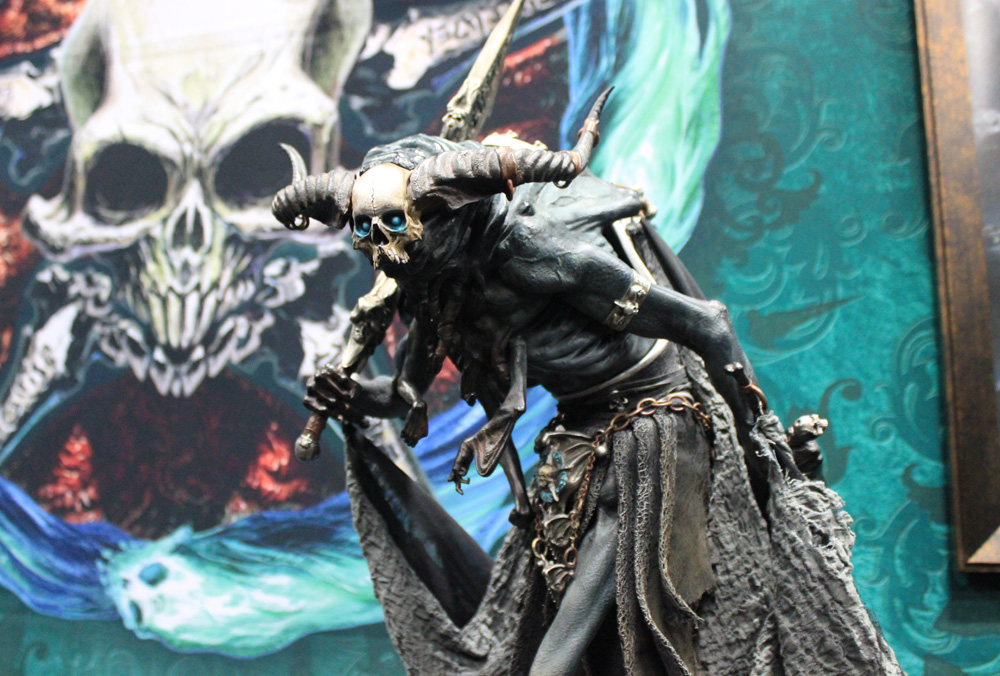 Many of the elements had not been spelled out, such as his legs, or different arm arrangements. We knew he would be in an executioner’s role, so the blade had to be a focal point. A great deal of time was put into the deco, and theme of his instruments.

We played around a lot with a variety of arm, and leg styles, as well as masks, and head shapes before we found what we liked. His canine companion was another element that just happened to develop organically. Tom had the idea to make a companion for him, but didn’t really hold me too much to any specific channels. I really had a fun time working out the look of this beast. I really drew heavily from the drawings of Stephen Gammel, the illustrator of the “more scary stories to tell in the dark” book series. I loved how in one of the drawings there is a “dog” with a human hand. So that’s where that came from. 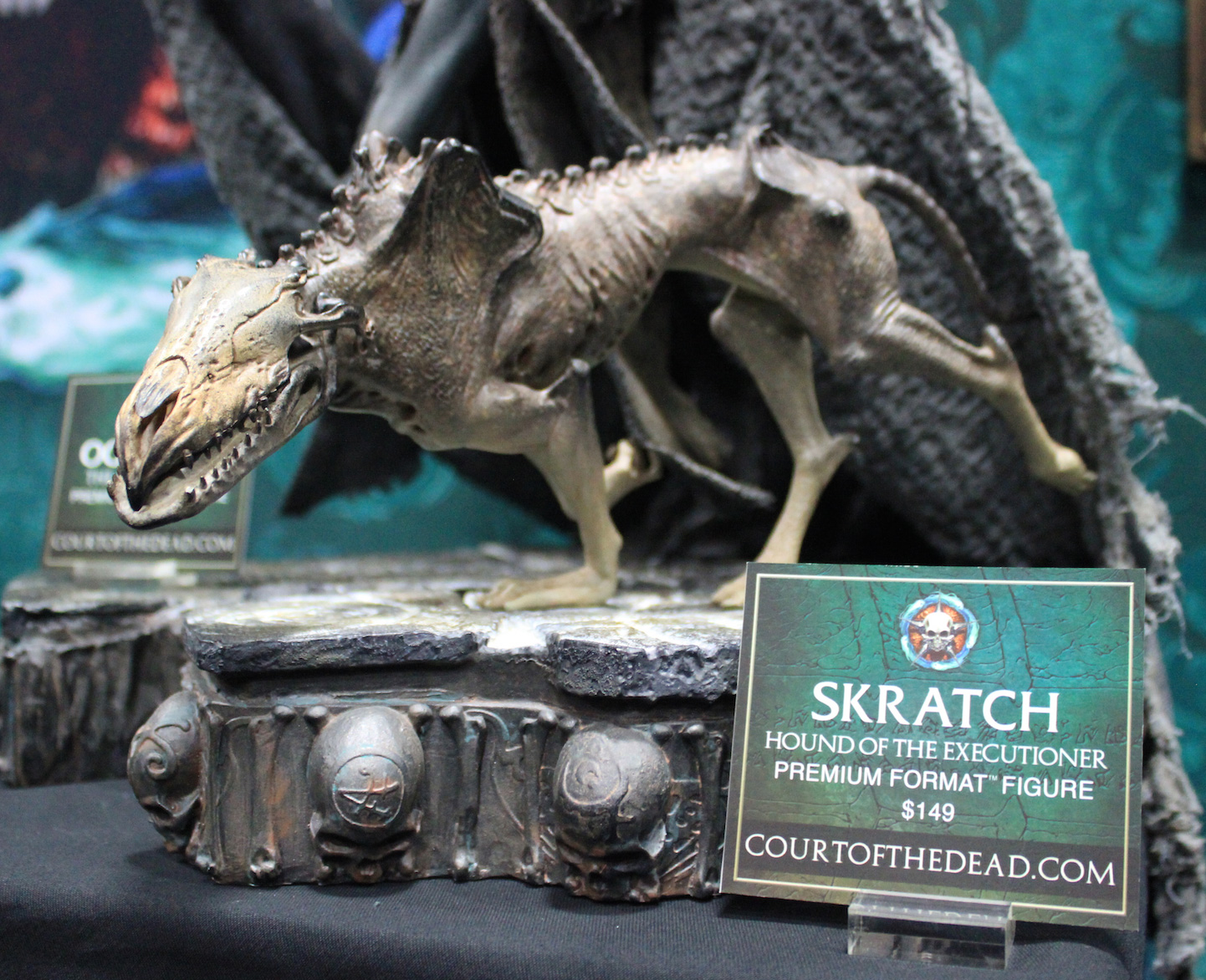 Tom was in my office many times a week, sometimes multiple times a day, working with me to add or subtract elements till we had what you see. The very best part of being a part of a process like this, I seeing it on display, and getting the reactions of the public. I’m very pleased with how he came out. 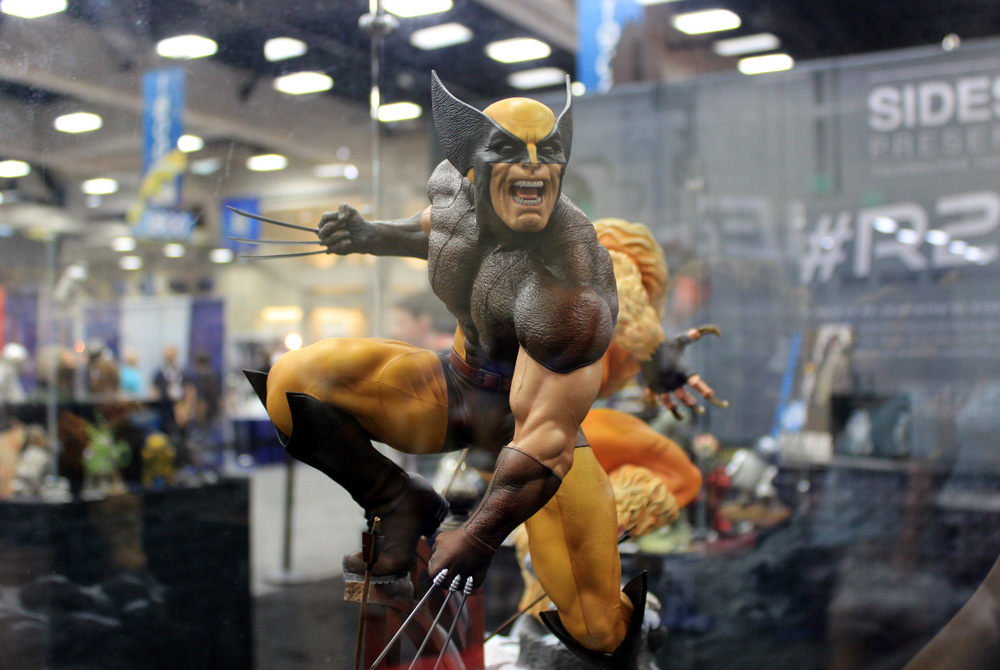 jman: You also worked on the Marvel Wolverine Premium Format Figure. It’s a great statue. He’s done in his classic yellow and brown costume. Both the masked and unmasked versions give the impression that Logan is pretty feral. What was the inspiration behind the statue?

MB: HA! This is another one of those pieces that started out VERY loose. I always wanted to sculpt Wolverine, so when the opportunity presented itself, I jumped on it. I worked really closely with Sideshow’s art director Dave Igo to really bring this one to life. There must have been about 6 poses and around 5 base ideas for this one at one point. For me, it’s always more fun to be a part of the design process for my projects rather than have a finished design land on my desk. So working with the design team to sculpturally flesh our as many possibilities before nailing one down is always exciting.

In the end, I think our composition tells a really interesting story. For me, it’s a story of his battle against a clandestine order of ninja assassins, at the end of which he must face his most vicious enemy, SABRETOOTH! 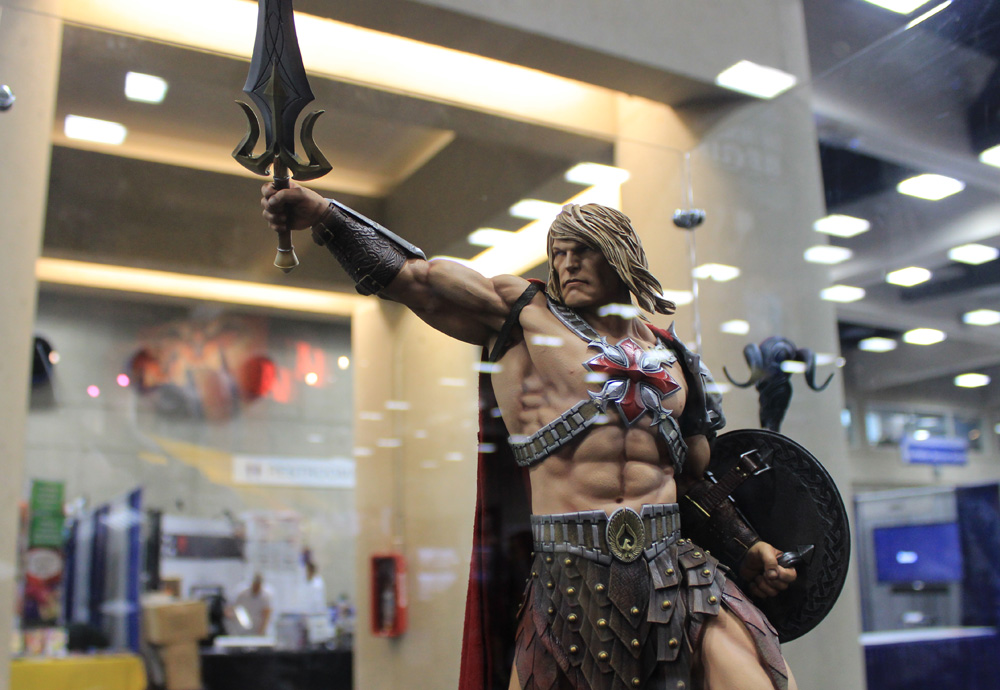 jman:  For me, though, the most impressive of your statues shown at SDCC are the He-Man/Skeletor statues.  And I’m not a big fan of the Masters of the Universe, either.  But, the attention to detail is incredible.  How long did it take you to do He-Man?  You also worked on Skeletor.  How is it for you collaborating on a piece?

MB:  Thanks very much! These two are certainly my favorite projects I have been a part of this year. The concepts for these are incredible. Stjepan Sejic supplied the building blocks; I just did the easy part. 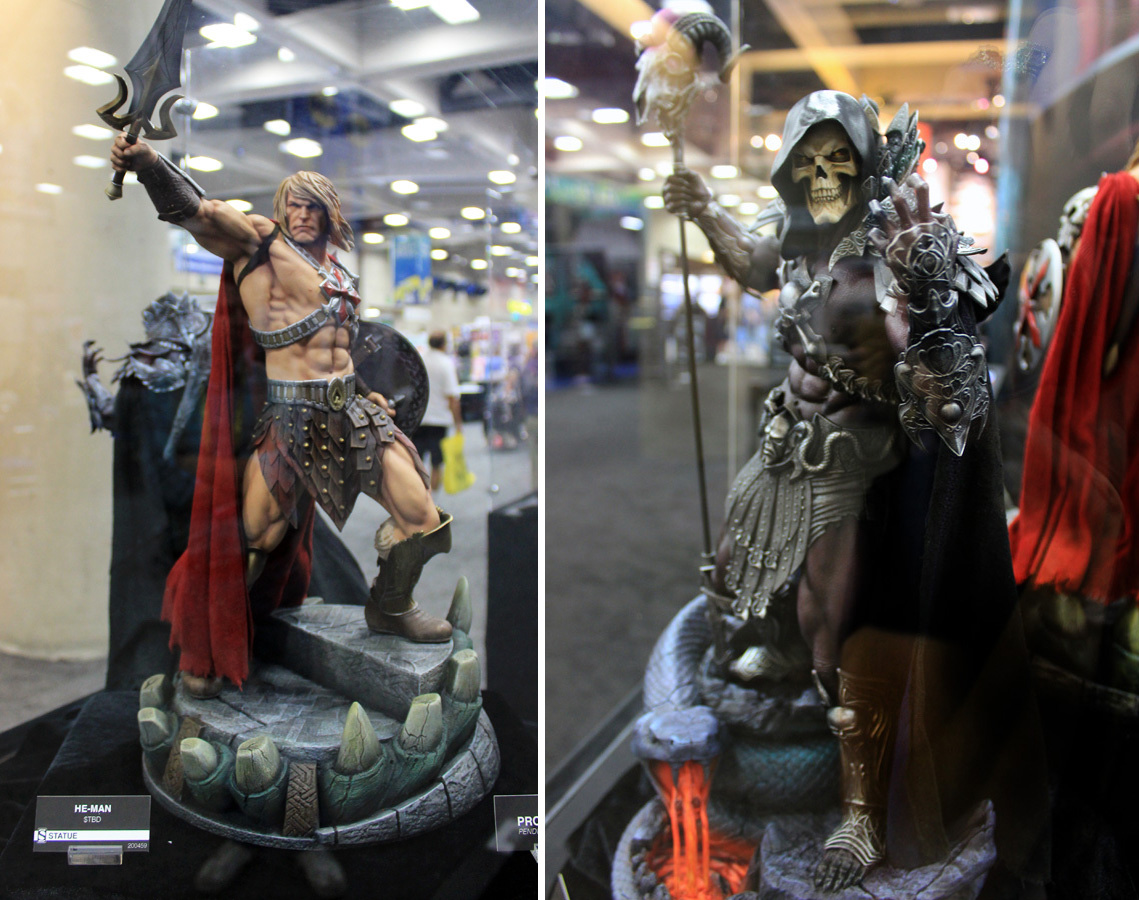 With He-man, we started with a number of Zbrush pose studies, then when we finally had a general consensus as to the pose, I went to town!  It took me roughly 6 weeks to get him finished, then we revisited the pose, and changed things around a lot! I ended up re-sculpting nearly the entire thing from the ground up. That took another couple weeks, but the end result ended up being far more impressive. As always, it’s a collaboration between design and sculpt, and sometimes even the licensor.

Another sculptor had been slated to sculpt the Skeletor companion piece to my He-man, but as comic con approached, it became clear that it was not going to make it. The only choice we had was to team up. Doing this digitally was a trick for sure. He would be working on the armor, weapons, and base elements as I was concentrating on anatomy. We would pass files back and forth all day. Once I had a body part the way I wanted it I would hand it off, and he would lay the armor on, and vice versa.

But really it’s thanks to Nathan’s excellent sculpting that Skeletor looks so amazing. That armor is simply incredible.

jman:  There’s also an “in progress” image of a Darth Maul statue floating around on the internets that looks pretty impressive. How’s that one coming along?

MB:  I’m not ashamed to admit, that I LOVE Darth Maul. Sure the movie may have not been for me, but who can resist that character? Darth Maul is wrapped! I’m sure you will be happy with what we release. That’s really all I can say about that one… 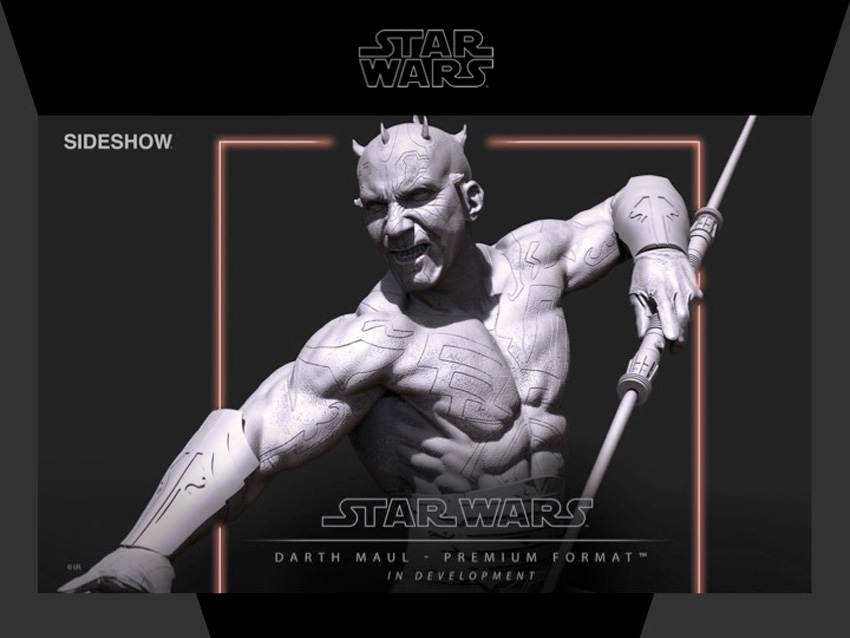 See more Star Wars news from our panel at Comic-Con 2015!

jman:  Of all the statues on display at SDCC, which one is your favorite?  Which one gave you the most trouble?

MB:  My favorite would absolutely have to be the Heath Ledger Joker. This is another one I got to have a hand in the design on. Also, one of the last projects I sculpted in wax. Well…the extremities any way. The base and body I did in zbrush. The portrait on this one took me longer than the entirety of the remaining parts combined. I really wanted to take my time, and pay tribute to not only the portrayal of the Joker, but the man behind the makeup! 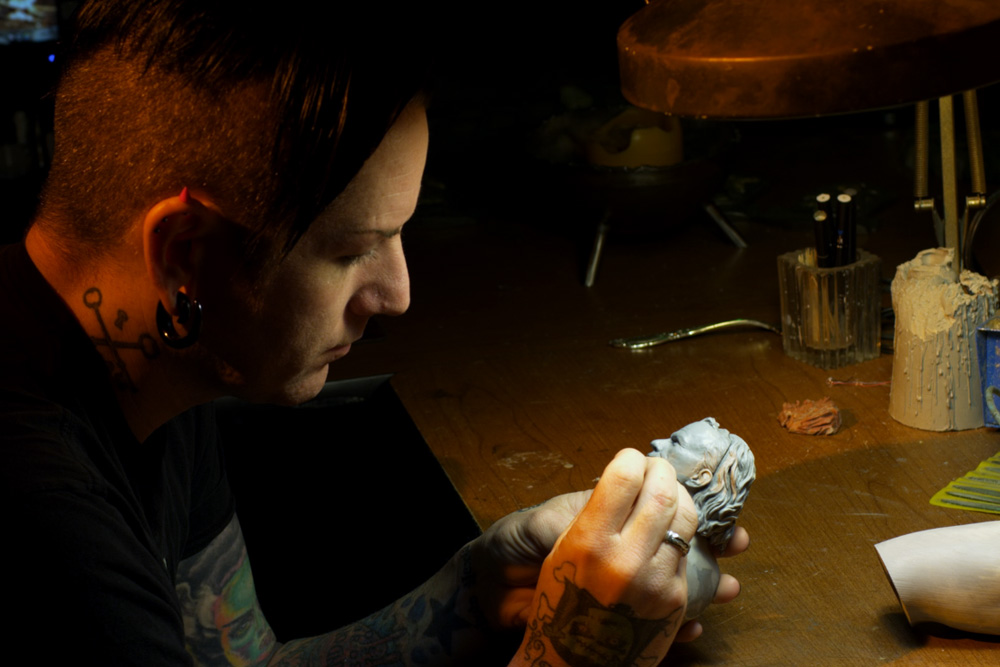 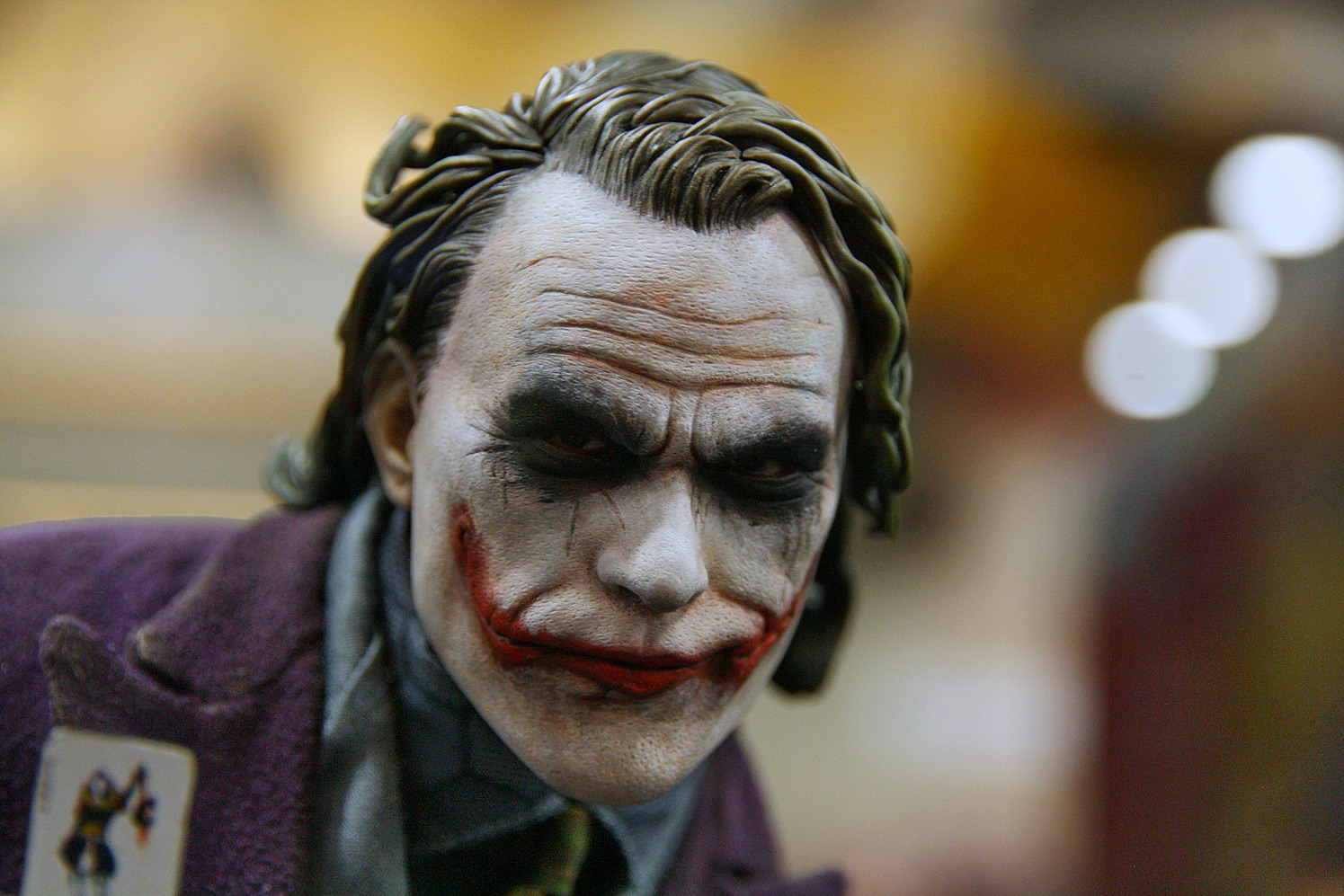 The most trouble?  Hmmmmm…that’s a hard one. None are really trouble, per se. But some take longer simply because of the process. You may get all the way to the end of something, then find that you have to go back and start over. It’s frustrating at first, until you realize that you don’t have to re-sculpt the entire project, you GET to re-sculpt the entire project. I mean, how many people get to go to work every day, and noodle away on Darth Maul tattoos? Or sculpt really intricate He-man armor? Not many. I feel so honored to be doing what I’m doing, and be a part of such an amazing team. 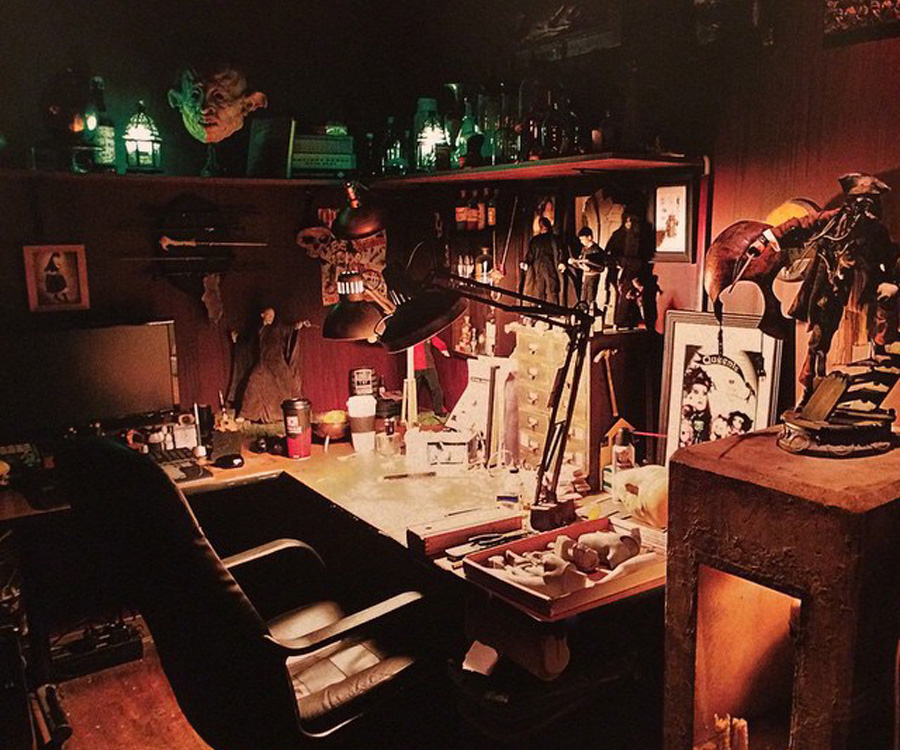 Matt’s corner of the Waxworks sculpting department at Sideshow

jman:  Switching gears a bit…are you self-taught?  Classically trained?  Who would you say are your influences?

MB:  Nobody is really self-taught. Everyone is influenced by others in their field. Whether that be a mentor, a coworker, or just an artist you are a fan of…we learn from what we see.

I would say that I was taught by many people along the way. My first job was at SOTA toys. I knew NOTHING at that time. I didn’t have much of a sculpting background other than dabbling.  But, I worked with a guy named Michael Norman who was nice enough to show me the ropes. He helped get me started in the right direction, and we still work together from time to time more than 16 years later.

As for influences, I’d say there are too many to name. I love Disney, of course. Everything about it. I grew up hooked on “making of” specials. I know I just HAD to be making miniatures of some kind somehow. Jim Henson really had a HUGE influence as well. Seeing not just the final films, but how the puppets were made, and how he brought them to life, really lit a fire under my ass.

jman: What are your thoughts on the rumored billion dollar expansion of Disneyland?

MB:  WAY too excited about it. There are those purists who don’t ever want the park to change, but I’m all for it. Besides, who the hell doesn’t want a Star Wars land!?? I need me some blue milk!! 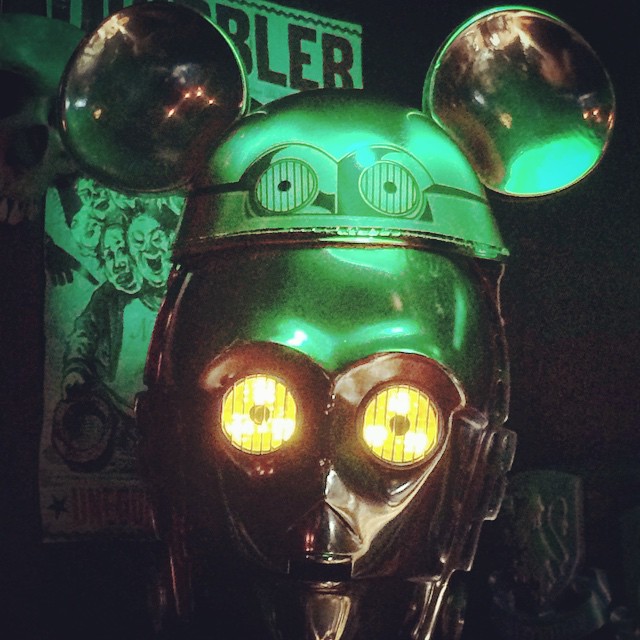 jman:  How much are you looking forward to The Force Awakens?  Did you catch the Korean television spot?

MB:  I’m eating up EVERY bit of news, all day every day! I’m one of those rare people who love spoilers. If I could see just the end of the movie today, I would do it in a heartbeat! And yes, that TV spot gave my chills. I love the references to WW2 Germany. I really brings it back the original trilogy.

I even broke down and pre ordered an Anovos Stormtrooper kit, just so I can wear it to opening day. Hopefully I can complete it on time!

jman:  Anything that you’re working on now that you care to talk about?

MB:  Not much I can say about what is going on at work. I can say it’s exciting, and I look forward to hopping in that seat every day. As for the rest of my sculpting work, I always have various projects kicking around at home. I hope to have a life size Star Wars bust to show at Monsterpalooza this coming September.

Many thanks to jman at Newsbox.com for letting us share the original interview!