With the release of The Rings of Power, there has been a significant amount of discussion regarding Tolkien’s canon. As with most adaptations, Rings of Power certainly takes creative liberties much like The Lord of the Rings film trilogy did.

Slight spoilers ahead for The Lord of the Rings: The Rings of Power 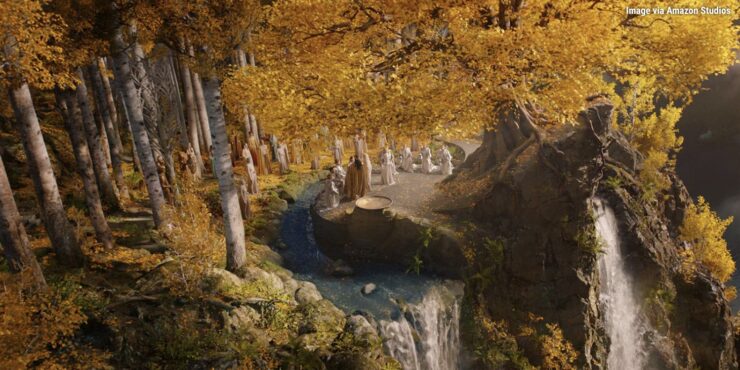 In the very first episode of Rings of Power, viewers get to see Valinor. While Valinor is not spoken about by name in LOTR movie trilogy, the heaven-like land in the West is discussed frequently. The Elves’ departure from Middle-earth is mentioned early in the extended edition of The Fellowship of the Ring as Sam and Frodo watch elves make their way to the Grey Havens. Their departure is discussed further as Arwen struggles with her decision to leave with the rest of her Elvish kin or stay in Middle-earth with Aragorn. In the end, Frodo is granted passage to Valinor with Bilbo, Gandalf, Galadriel, and Elrond.

In Rings of Power, Galadriel is seen as a child with other Elvish children in Valinor. When she’s an adult, King Gil-galad believes that Sauron is defeated and grants Galadriel and her company the honor of passage back to Valinor. As described in The Lord of the Rings, the “grey-rain curtain of this world rolled back,” revealing bright light and distant shores. Although Galadriel decides to turn back, seeing what one experiences when returning to the shining shores of Valinor was a wonder to behold.

Fans of the LOTR movie trilogy are likely familiar with Númenor through Aragorn. He is one of the Dúnedain, a race of Men from the West descended from the people of Númenor who live much longer than the Men of Middle-earth. As if the stunning visuals of Númenor were not enough, Rings of Power goes beyond showing viewers the lauded Kingdom of Men. Galadriel is ultimately saved by Elendil, Aragorn’s distant ancestor. Viewers are also introduced to Isildur, Elendil’s son.

Isildur’s role in the history of the One Ring is well-known to fans of Middle-earth. He cuts the Ring from Sauron’s hand and claims the Ring for his own, dooming his ancestors for centuries. Witnessing the spectacular sights of the kingdom of Númenor at its height was a treat for fans of Middle-earth. Being able to meet the ancestors of Aragorn who played a large role in setting the stage for the events of The Lord of the Rings helped root Rings of Power in lore many were already familiar with.

The name Khazad-dûm, also known as Moria, is one that strikes fear into the hearts of fans of the movie trilogy. By the time the Fellowship enters the mountain halls late in the Third Age, it has become a tomb for the ill-fated Dwarves who tried to restore it to its former glory. Gandalf also loses his life — albeit temporarily — to a Balrog of Morgoth on the Bridge of Khazad-dûm.

The Dwarves and their accomplishments are not a focal point in The Lord of the Rings. In Rings of Power, however, their culture and achievements take center stage in their glory days. With similar designs to the Dwarves seen in the movie trilogy, the dwarves of Rings of Power feel immediately familiar. The kingdom and its people are clearly thriving under King Durin III. Its halls are well-lit and, with flowing water, even plant life thrives under the mountain. In the Second Age, Khazad-dûm is a far cry from the goblin-infested halls seen during the Fellowship’s travels. Seeing the Kingdom of Khazad-dûm in all its glory is nothing short of awe-inspiring. It also makes Balin’s goal to reclaim it and Gimli’s grief at its downfall more understandable. 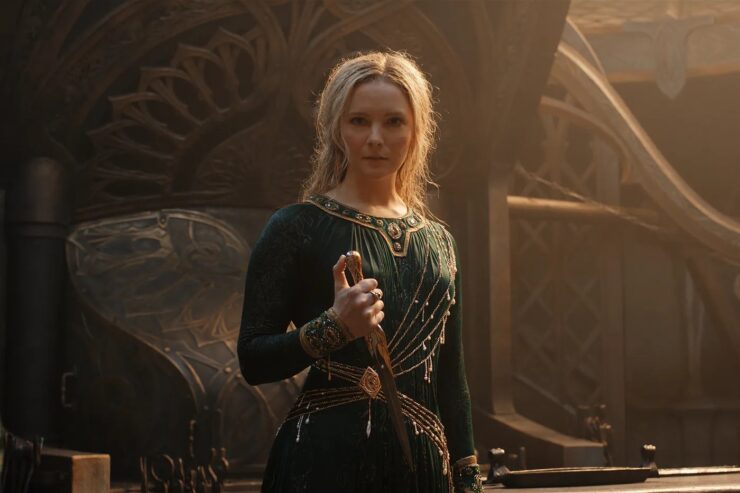 Despite being central players in the events of The Lord of the Rings, Galadriel, Elrond, and even Sauron himself do not have a great deal of screen time. In Rings of Power, however, these three characters who play a key role in shaping the latter years of the Third Age of Middle-earth are some of the main characters. Where Galadriel takes a more removed approach in Sauron’s defeat in The Lord of the Rings, she is presented as being a warrior in Rings of Power. She is relentless in her pursuit of Sauron, much to the chagrin of her fellow Elves who believe he is defeated for good.

In Rings of Power, Elrond is not yet Lord of Rivendell. His political prowess and simultaneously discerning and friendly nature are apparent from the outset. It is clear how and why he can later summon people from all races and backgrounds to Rivendell, with so many willing to answer his call.

In The Lord of the Rings, Sauron appears as a giant armored being in the beginning. Later, he takes on physical form as a great, fiery eye. He is often called Sauron the Deceiver in Middle-earth, and Rings of Power does not disappoint on that front. It turns out Galadriel met Sauron in the second episode, traveling as a man named Halbrand. In the end, he implores Galadriel to join him. She refuses. He is last seen as a hooded figure walking into the wasted lands of Moria. Before becoming the larger-than-life beings they are in The Lord of the Rings, these three important characters are humanized in Rings of Power.

5. The Forging of the Three 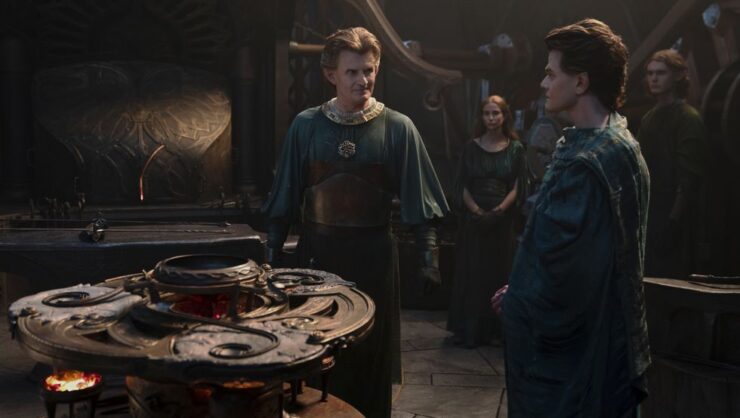 In The Lord of the Rings, the audience is told about the twenty Rings of Power that were created at the very beginning: three for the Elves, seven for the Dwarves, nine for Men, and the One Ring for Sauron. Unlike the rings belonging to Dwarves and Men, the bearers of the Elvish rings neither lose their rings nor fall to Sauron’s power.

By the time of the events of The Lord of the Rings, Galadriel, Elrond, and Gandalf bear the three Elvish rings. Although their bearers avoid falling to Sauron, the threat of his dominion lingers as long as the One Ring exists. In Rings of Power, audiences are treated to an extended sequence showing the materials, time, and careful craft that went into the forging of the three Elvish rings under Celebrimbor’s guidance. Both beautiful and powerful, their creation serves as a perfect jumping off point when season two begins.

With its stunning scenery, dynamic and familiar characters, and exploration of Middle-earth’s history, Rings of Power is well worth watching for fans of The Lord of the Rings. These deeper explorations both serve Rings of Power independently as a story and also enrich fans’ understanding and appreciation of these concepts in the movie trilogy.

Audiences can look forward to even more exploration of the founding of Mordor and the forging of the other Rings of Power when the second season of Amazon’s series is released. Which new or expanded parts of Rings of Power have stood out to you? Share your thoughts with other LOTR fans at side.show/geekgroup, and don’t forget to Let Your Geek Sideshow!

Pop Culture Headlines - The Last of Us Release Date