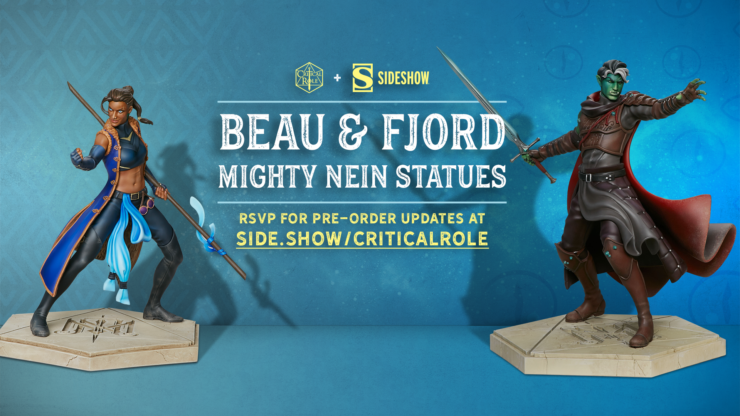 Collectors, how do you want to do this?

Through a brand-new partnership with the team behind Critical Role, the most popular story-driven and worldbuilding digital media brand in the world, Sideshow is poised to launch a new collection of fine art and collectible figures based on the show’s popular and long-running campaigns set in the fantastical world of Exandria. 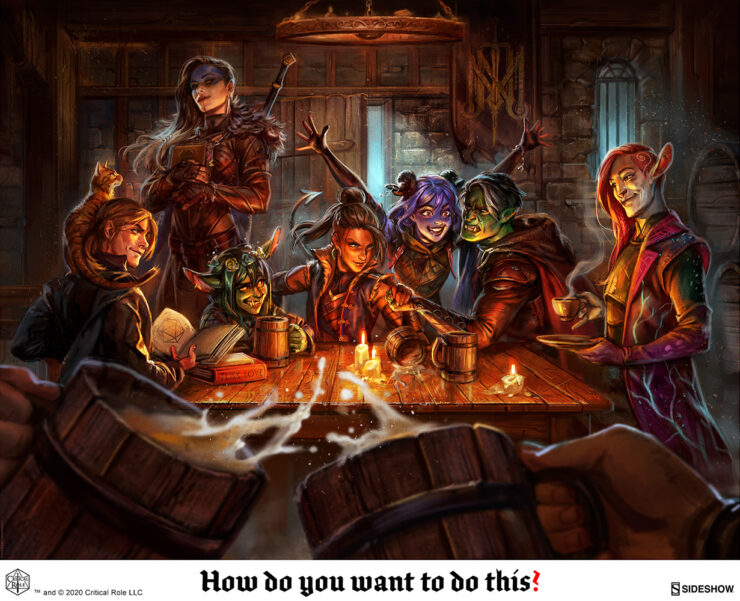 Critters can now look forward to exciting new Critical Role collectibles from Sideshow, the makers of museum quality statues, figures, and fine art, celebrating the legendary heroes of both campaigns – Vox Machina and the Mighty Nein.

Sideshow’s Critical Role collection will feature fine art prints and three-dimensional figural art so you can gather your favorite characters into an adventuring party for the ages.

“As fans and tabletop gamers ourselves, Sideshow is extremely excited to be partnered with Critical Role to bring Critters around the globe new premium-quality, limited-edition collectibles of Vox Machina and the Mighty Nein,” says Anna Van Slee, Brand Director of Sideshow. “Working closely with the cast to stay faithful to fan-favorite, canonical representations of the characters, we are hoping to make these wondrous items as glorious as any goods Shaun Gilmore or Pumat Sol would sell to adventurers.” 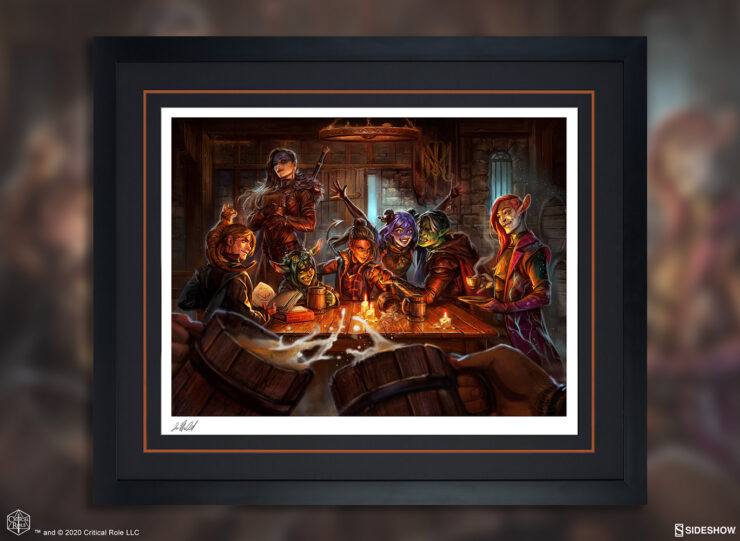 Starting with the show’s current campaign, the heroes of the Mighty Nein get the spotlight in The Mighty Nein: This is How We Roll! Fine Art Print by artist Ian MacDonald. This vibrant illustration catches the adventurers taking a short rest in a local tavern, celebrating their fantastic travels. Packed with visual Easter eggs, this high-end collectible art print will be available for pre-order on Thursday, December 17th, 2020, with custom framed and unframed options available. 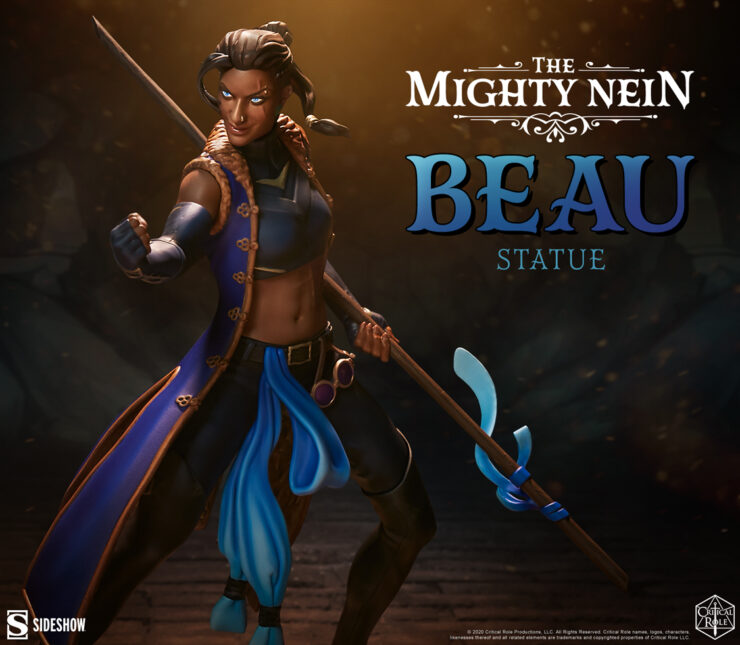 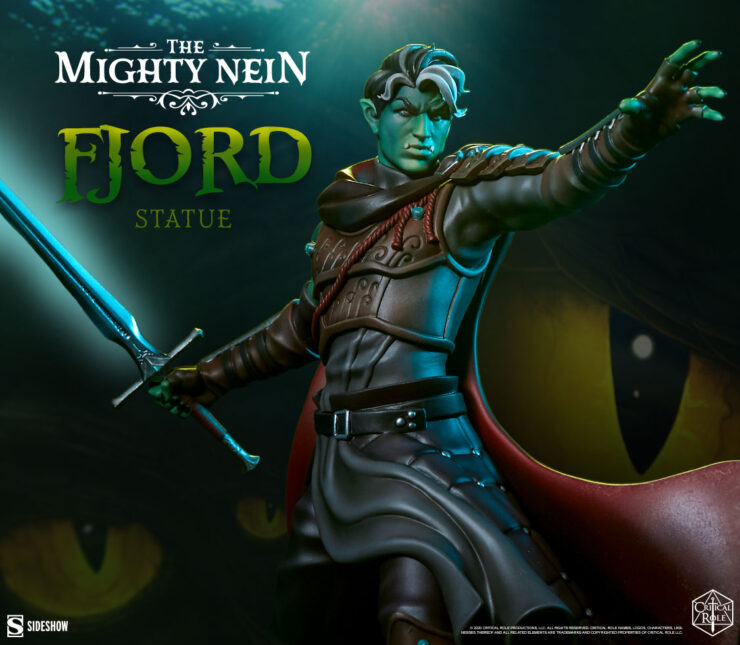 Next up, two members of the Mighty Nein will make their debut as statues, launching for pre-order through Sideshow on Thursday, January 14th, 2021. The Beau Statue is pop-popping onto the scene, celebrating the indomitable spirit of the Mighty Nein’s energetic human Monk while the Fjord Statue captures the strength and stoicism of the half-orc Warlock channeling his patron’s power. These three-dimensional representations of the beloved heroes are faithfully detailed with the characters’ costumes and acquired treasures from throughout their Campaign 2 adventures.

Stay tuned for even more product reveals coming soon as a part of Sideshow’s new Critical Role line of collectibles. You can visit side.show/criticalrole to RSVP to be notified when these pieces launch for pre-order.

Critical Role is the most popular story-driven and worldbuilding digital media brand in the world. While it started off as a roleplaying game between a group of friends in 2012, Critical Role has since evolved into a multiplatform entertainment phenomenon that has branched out into a variety of shows and endeavors, including the flagship show Critical Role, comic books, animation, live performances, podcasts, fan art, graphic novels, multiple books on the New York Times Best Sellers list, philanthropy through Critical Role Foundation, original tabletop game publishing through Darrington Press and more.

A passionate and engaged community tunes in each week to watch their favorite storytellers take on new adventures led by veteran voice actor Matthew Mercer and composed of other well-known voice actors Ashley Johnson, Marisha Ray, Taliesin Jaffe, Travis Willingham, Sam Riegel, Laura Bailey and Liam O’Brien. Engrossed in the stories, characters and camaraderie, over half a million regular viewers watch every week and hundreds of thousands more per month continue to discover Critical Role for the first time. For more information on Critical Role go to: www.critrole.com.

The Mighty Nein: This is How We Roll! Fine Art Print by Artist Ian MacDonald