Sideshow’s Week in Geek spotlights some of the cool and exciting ways we share our style as fans on and off the clock.  This week- Spider-Man PS4!

At Sideshow, with geek power comes geek responsibility- we work hard and play hard, celebrating the characters we love.   With the release of Spider-Man PS4 from Marvel and Insomniac Games, some of the Spider-Fans around the office had the chance to sling some webs and catch thieves just like flies when the long-awaited game finally bowed on the console over the weekend.

We had the chance to ask a few of the gamers in the office about their favorite spectacular Spider-Suits, power-ups, and Easter eggs in the mighty Marvel manner…

Did you pre-order Spider-Man to get any of the bonus materials? 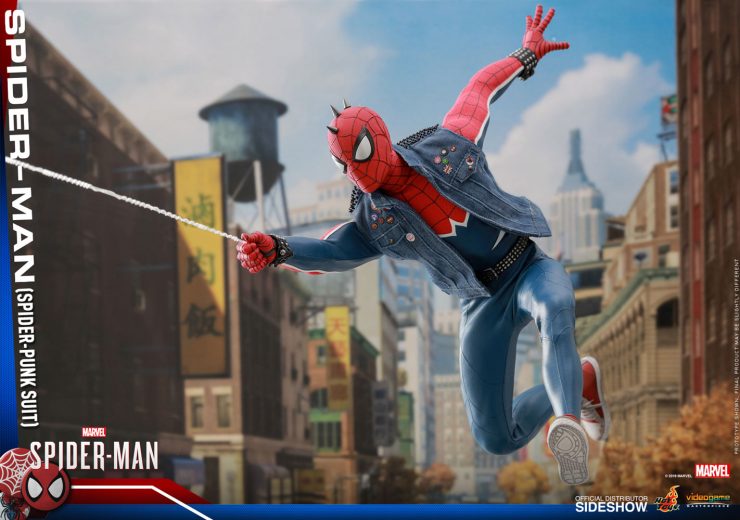 “I did pre-order the game! It is by far my most anticipated game in several years! And really wanted to be able to use the Iron Spider Suit from Infinity War.” –Brendan

“I did not preorder the game, just picked it up on my way home.” –Brett

“I did! It was cool to get some of the costumes pretty early on to mess around with.” –Erik

“I pre-ordered the Collector’s Edition of the game so I could make sure I got all bonuses and content for the game plus I really wanted that Steelbook that only came in that edition.” –Joseph

“I pre-ordered the standard version after seeing the Velocity Suit unveiled during San Diego Comic-Con. Couldn’t pass that up!” –Kitty

Be honest… how many hours have you already sunk into the game? 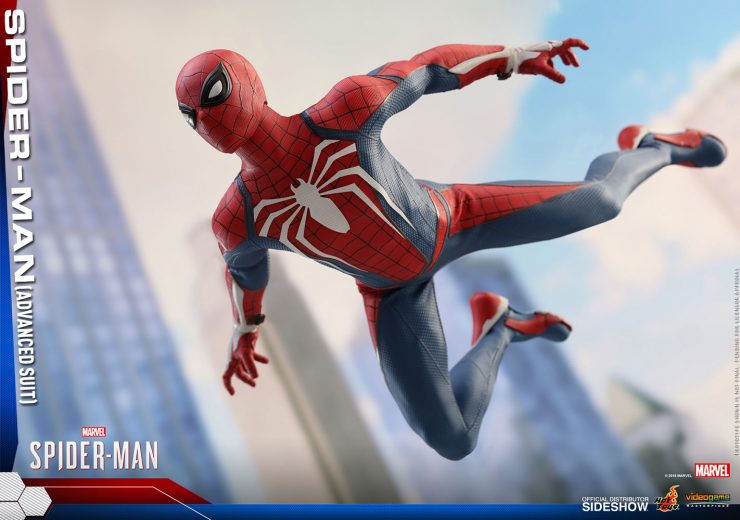 “Unfortunately, I didn’t get much time to play it this weekend. I probably put in about 2-3 hours, mostly just swinging around.” –Brendan

“I would have to guess somewhere in the friendly neighborhood (Ha!) of 17 hours…” –Brett

“I mean I spent the whole weekend glued to the TV.. I can’t even begin to count – haha! It’s quickly become one of my favorite games.” –Erik

“Minimum I have played for about 10-15 hours at least. It is just so good I was having a hard time putting it down!” –Joseph

“By now, I think I’ve managed to get a good 8 hours in. I keep messing around with side quests!” –Kitty

What is your favorite Spider-Man suit featured in the game?

“I’ve been keeping away from the internet so I don’t spoil any suits before I unlock them. The ones that I have unlocked, I can’t stop switching between all of them. I keep going back to the Classic Suit and the Advanced Suit, though.” –Brendan

“I really like the suit you get for completing all of the Black Cat side missions.” –Brett

“I really love the MCU costumes, it makes me feel like I get to experience a new movie while I wait for the next film to come out.” –Erik

“So far, out of all the suits I have unlocked, the Velocity Suit that was designed by Adi Granov is probably my favorite. I really love how it looks while I explore the city at night due to the emanating light that radiates out of the Spider logo.” –Joseph

“Spider-Punk.  Hands down.  Although the Negative Zone suit looks gorgeous against the city lights during the nighttime segments of the game.”  –Kitty

What is your favorite power to use in Spider-Man PS4? 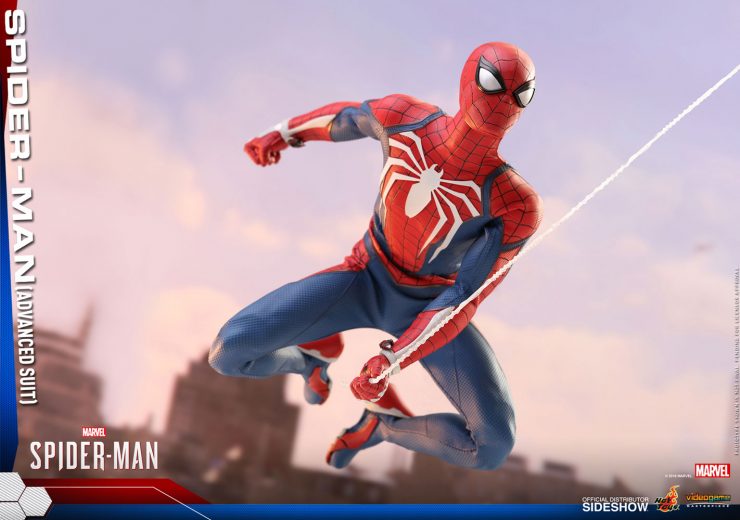 “So far, my favorite power is just being able to swing around. They’ve added so much variety in how you can get around the city that it’s really enjoyable to constantly be looking for and executing fun acrobatic moves like Spider-Man really does in the comics and movies.” –Brendan

“Perch takedowns.  I love the Spidey-sense of accomplishment I get from stealthily wrapping thugs in safe little web nets, leaving them to hang and think about what they did without blowing my cover.”  –Kitty

Did you find any fun Easter eggs? 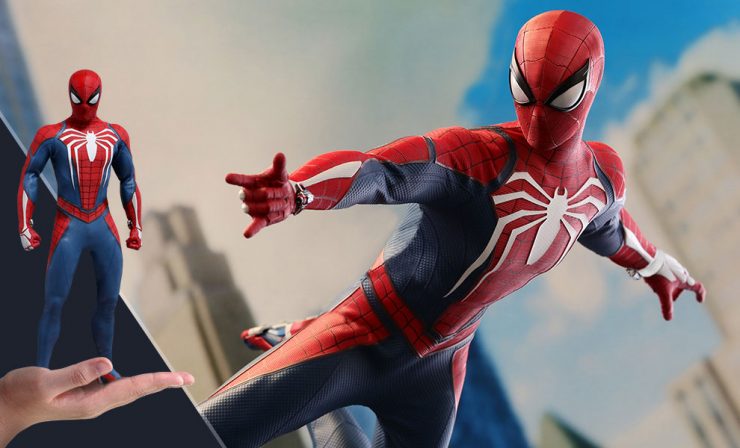 “I have found a few Easter Eggs. The first one I noticed was in the opening cinematic. The camera pans over to Peter and you can see a copy of Amazing Fantasy #15 on one of his shelves. That was a fun one.” –Brendan

“I love that in one of the backpacks there is a kid’s drawing of the time Spider-man retrieved a little boy’s balloon- in reference to the annoying side-quest in the Spider-Man 2 game from years ago.” –Erik

“Easily my favorite Easter Egg thus far in my exploration of this game is the inclusion of Dr Strange’s Sanctum Sanctorum, as Dr. Strange is one of my favorite Marvel characters. It is nice to see him and his existence being acknowledged in this game.” –Joseph

“It’s not so much of an Easter egg since it’s specifically on the game map, but finding Alias Investigations in Hell’s Kitchen has been my favorite so far.  It’s amazing to see Spider-Man in the center of a rich Marvel Universe.  Nelson and Murdock’s offices are also hidden away in HK- I guess even the Defenders need help keeping their city clean, so on behalf of Spidey, you’re welcome.” –Kitty

Big thanks to all of our spectacular Spider-fans for sharing their game experiences with us!  If you’re playing Spider-Man PS4, weigh in with your own thoughts on the best powers, suits, and Easter eggs!  We want to know how you’re choosing to be a Spider-hero.

Be sure to check out our last Week in Geek, where Sideshow staffer DK told us about the new Sandman Comics from DC/Vertigo! 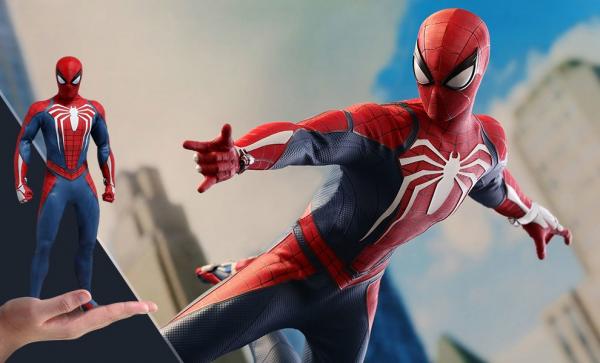 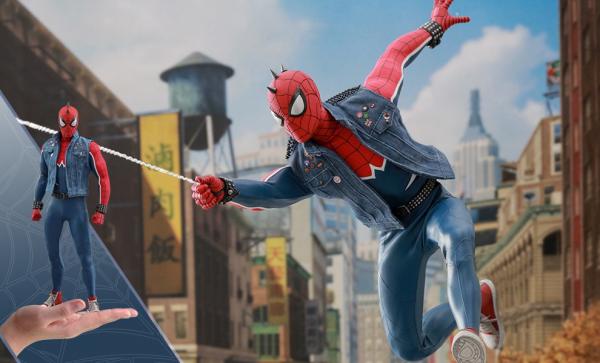 The Clawsplay Fine Art Print by Olivia Makes a Purrfect Addition to Your Batman Collection!