Sideshow’s Week in Geek: What We Do in the Shadows

Sometimes the best pop culture gems are hidden in the shadows, found only through recommendation, word of mouth, or random happenstance.  As these cult favorites start to grow in popularity, they may be given a new afterlife with spinoffs and additional media.

Taika Waititi and Jemaine Clement’s vampire mockumentary What We Do in the Shadows has found that success, subtly invading the popular film sphere to reach new acclaim and even sink its fangs into several new spinoff series.  From Wellington Paranormal in New Zealand to a new FX series in America, to even a werewolf series in development, these outrageous vampire roommates have stepped into the proverbial light and gathered a new legion of fans since the original film’s debut in 2014.

This week, we talked to Sideshow’s resident vampire fans to talk about what they do in the shadows, whether sharing the movie with a friend, quoting lines nonstop, or enjoying a nice plate of bosghetti… 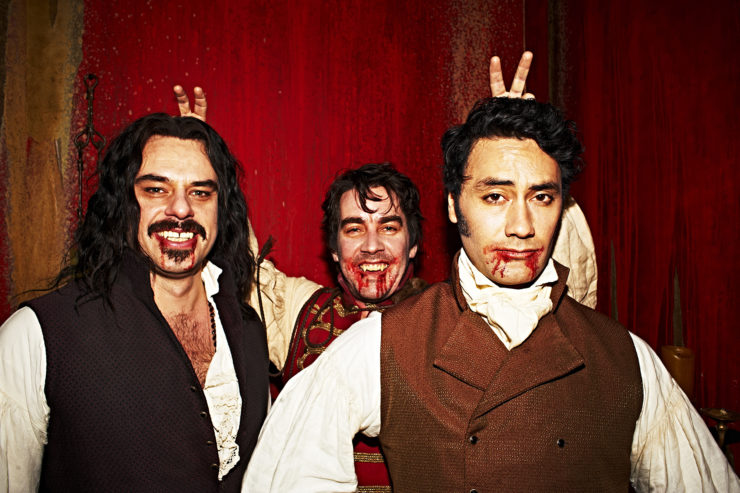 How were you introduced to What We Do in the Shadows?

“Well I’m a big fan of mockumentaries – and when I heard there was one made by the folks involved with Flight of the Concords, I was immediately intrigued and bought it instantly.” –Erik

“Susan made me watch it!” –Kitty

“My colleague Erik recommended it to me as I was walking out the door one weekday evening. I watched it that night and fell in love.” –Anna

“I had heard some good things about it leading up to its release, so when the Arclight in Hollywood got it, I went there to see it on the big screen because that’s how movies should be seen.” –Ricky

“I love vampire movies and I love Taika Waititi as a director, so I did not need much convincing to watch What We Do in the Shadows. I enjoyed it so much that I watched it five times in a month.” –Kiana

“I watched the movie on a plane on a flight back from Germany with a buddy. We laughed so loudly we got into trouble for waking up the other passengers.” –Andy

What is your favorite thing about the film?

“The mundane side of their existence. The boring stuff, that shouldn’t be utterly hilarious -but totally is.” –Andy

“The cast. They play off one another so well and created one heck of a comedy that is a treat for the eyeballs and ear holes.” –Alex

“I love how hard it leans into it’s New Zealand-ness, and I also how it honors a lot of vampire lore in clever and hilarious ways.” –Erik

“I love that they play on the typical vampire tropes in such a humorous and in more of an “everyday” than spooky way. For example, my favorite gag in the whole film is when they are all at the masquerade and while there’s a full room of vampires dancing, the camera pans to a mirror and you only see Stu and I think a zombie.” –Ricky

“The beginning of the movie makes me cry laughing. I love the introductions to each of the flatmates (although Petyr is probably my favorite). Also, Deacon’s dancing!” –Kiana

Do you have a favorite quote?

“‘Leave me to do my dark bidding on the internet!’ ‘What are you bidding on?’ ‘I’m bidding on a table.'” –Andy

“It’s not necessarily a quote, but I just crack up every time Deacon says the word ‘Bisgetti.'” –Erik

“Can’t pick just one! I like, ‘We’re werewolves, not swearwolves,’ and ‘Vampires don’t do dishes.'” –Alex

(It’s hard to beat Vlad’s reasoning of why they drink virgin blood:) “I think of it like this. If you are going to eat a sandwich, you would just enjoy it more if you knew no one had f$^%ked it.” –Anna, Ricky, AND Alex 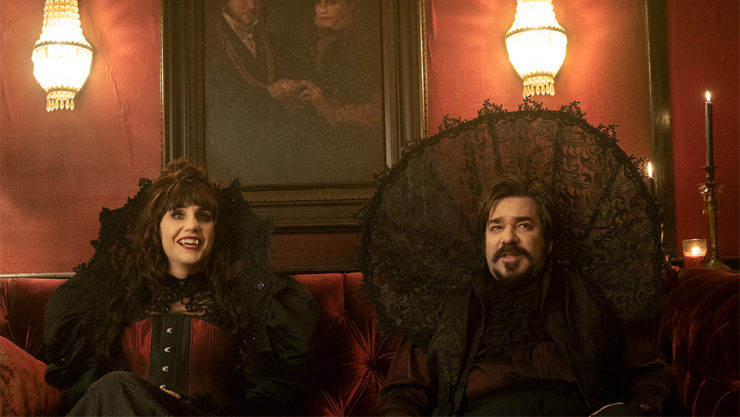 Have you watched any of the What We Do in the Shadows television series on FX yet?

“Unfortunately, I have not gotten around to it yet.” –Ricky

“Just the pilot episode so far, but I LOVED it!” –Andy

“I haven’t! I know, I deserve the Procession of Shame. But I’m looking forward to binge-watching it while eating basghetti.” –Kiana

“Yes!  It’s just as good as I hoped it would be. Even my parents, who had never seen the film, think the show is amazing!” –Kitty

If yes, what are you enjoying about the series?

“The humor is completely there. It’s exciting to get more vampire adventures, especially set in New York. Plus, Matt Berry is amazing, and when Nandor called crepe paper ‘creepy paper’ I just about lost my mind laughing. I love that vampires still do arts and crafts.” –Kitty

Would you want to be a vampire in this world?

“I personally would want to be a “Stu”. That way I’d get to be friends with those cool vampire dudes, but not have to drink blood (blegh).” –Erik

“Sure but I would be much more of a Jarmusch-esque vampire.” –Ricky

“Being a vampire in the ‘What we do in the Shadow’s universe seems pretty close to being a human in general. So it doesn’t seem too different except the whole ‘live forever’ thing. So would I want to put up with the annoyances (and the good parts) of life for eternity…I suppose it will depend on my patience level at the time of final decision to vampire or not vampire.” –Alex

“I want to be a Werewolf in that world…” –Andy

“Werewolves, not swearwolves!” –Kiana and Anna

“This isn’t going to be a movie or universe that will resonate with everyone but for those it does, it’s simply one freaking hilarious group of characters that have invited us into their coffins and crypts to give us a load of laughs.” –Alex

“What We Do in the Shadows brought documentary-style sitcoms back from the dead. I want 6 seasons and a movie!” –Andy

“This movie came out in 2014, which was an incredible year for vampire films. I think within the timespan of about 6-8 months, we got this, Ana Lily Amirpour’s “A Girl Walks Home Alone At Night” and Jim Jarmusch’s “Only Lovers Left Alive”. They are all very different but very excellent takes on the vampire genre and should go to the top of everyone’s list of films to watch if they haven’t seen them already.” –Ricky

“Please check out all of Taika Waititi’s other films! If you liked What We Do in the Shadows, and Thor: Ragnarok, his earlier stuff has just as much character and heart in them. I highly recommend Hunt for the Wilderpeople and Boy.” –Erik

Big fangs to our Sideshow’s resident vampires for sharing their favorite moments and quotes with us!  Be sure to check out our last Week in Geek, where some staffers attended early screenings of SHAZAM! and shared their reactions! 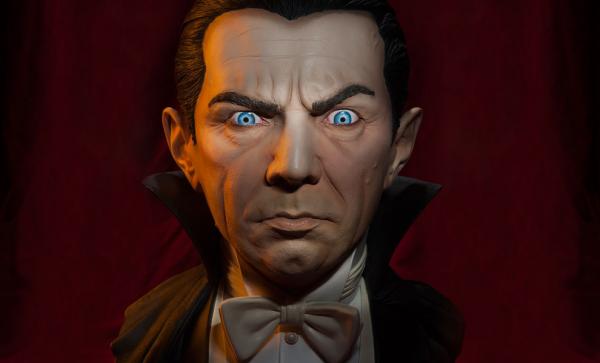