The symbiotes of the Marvel universe are a race of extraterrestrial parasites that bond to their hosts to create powerful new beings. Also known as Klyntar, the amorphous beings were once known as a generous species that chose hosts who were of strong heart and mind. They have bonded with heroes, such as Captain Marvel and Spider-Man, and pure-hearted individuals like Groot.

Unfortunately, symbiotes can also bond with villains, which corrupts the parasite into the more dangerous creature comic readers are familiar with. The infamous Venom symbiote was the first brought back to Earth, done so accidentally by Peter Parker after the first Secret Wars. Since then, more symbiotes have come to Earth, creating monstrous villains whose feats are both terrifying and death-defying.

In Venom: Let There Be Carnage, audiences will see the horrifying showdown between Venom and Carnage on the big screen. The inky shadows of the symbiotes have left a mark that most fans can’t erase from their darkest nightmares. Let’s take a closer look at six of the most powerful Marvel symbiote villains. After the Venom symbiote separated from Spider-Man, it merged with multiple other hosts in an attempt to find stability. The most notable host it bonded with was Eddie Brock, who became the villain Venom, who quickly became one of Spider-Man’s archenemies. His symbiote is black and white, with his face almost covered in a corrupted version of Spider-Man’s mask.

As Venom, Brock could exhibit super strength and immunity to the powers of other heroes like Ghost Rider’s Penance Stare and Spidey’s spider-sense. Venom is weak to fire and sonic energy, however. 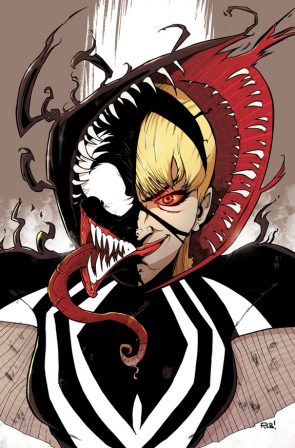 Marvel Comics also introduced Earth-65, the alternate universe in which Gwen Stacy, AKA Spider-Gwen, received the spider powers instead of Peter and became Spider-Woman. It was only a matter of time before they introduced Venom in this new story.

What began as a Gwen Stacy tribute variant cover morphed into Gwenom, who might even be Spider-Gwen’s toughest foe yet. In this Gwen’s universe, Matt Murdock (Daredevil) is the corrupt leader of The Hand and Gwen, rather than Peter, is the one who’s bitten by the spider. After losing her powers, Murdock offers Gwen a way to regain them, but it comes at a cost — serving him in his criminal underworld and bonding with Venom. With the symbiote pulling her under its influence, Gwen becomes consumed by rage and vengeance, wreaking havoc on the people around her. Eddie Brock’s Venom symbiote spawned several offspring over the course of its time on Earth. One such symbiote bonded with the psychopath Cletus Kasady, turning him into the twisted monster Carnage. This combination would prove to be a source of murderous chaos, even more than Eddie’s Venom.

His symbiote is corrupted and evolved, making Carnage even stronger than both Venom and Spider-Man. He can shapeshift his limbs and often turns them into hard, sharp weapons with which to attack his victims. His symbiote is red and black, and he commits every crime with zero remorse for his prey. When the Life Foundation began experimenting on Venom, it created five other new symbiotes in addition to the previously spawned Carnage. The Scream symbiote bonded with Donna Diego, who was quickly bested by Spider-Man after she began to terrorize the public.

Scream has web-slinging and wall-crawling powers, and also uses her prehensile hair tendrils as weapons to ensnare her enemies. She can also manipulate her biomass to construct wings, making her unique among other symbiotes as one who flies. Her symbiote is yellow and red. 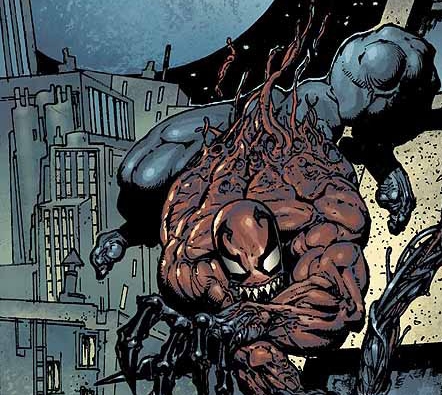 The Toxin symbiote spawned from Carnage, who had hoped to kill its offspring (a Venom family lineage that now spanned a thousand others symbiotes). Toxin bonded with NYPD officer Patrick Mulligan, but since the symbiote was still young, it didn’t affect him much.

As Toxin grew stronger, Venom and Carnage planned to destroy it together, yet Mulligan hoped to use his powers for good. Eventually, the symbiote and its host came to an agreement that allowed them to co-exist somewhat peacefully. Toxin is a red and black symbiote. 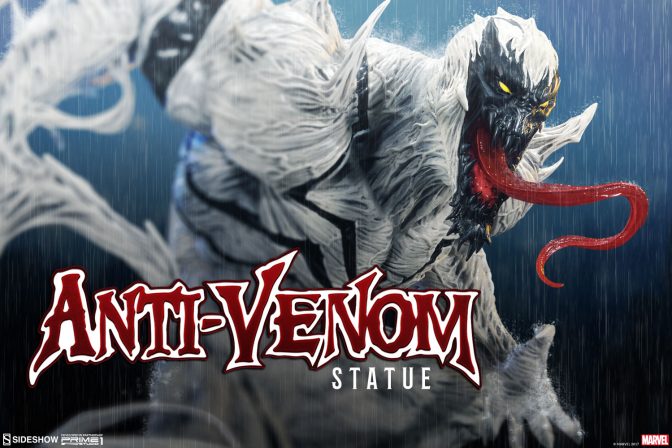 Eddie Brock became Anti-Venom after being exposed to mystical healing energies that interfered with the Venom symbiote, causing it to become a white costume with restorative powers. These powers are strong enough to cancel out Spider-Man’s radioactive powers whenever the two are close enough together.

Anti-Venom’s touch became deadly to the original Venom, and with it Brock tried to cure the others who had once hosted Venom, or those with diseases that the symbiote could detect. This symbiote also lacks the traditional weaknesses of Venom, unaffected by fire or sonic blasts.

Just imagine what it would be like had Spider-Man never come into contact with the Venom symbiote in the first place! Since that fateful day, countless enemies, and even heroes, have spawned from the alien parasite creatures.

Host your very own symbiotes with Sideshow’s offering of Spider-Man, Carnage, and Venom collectibles. Who is your favorite symbiote? Let us know in the comments and don’t forget to Let Your Geek Sideshow!