What is Symbiote Spider-Man? 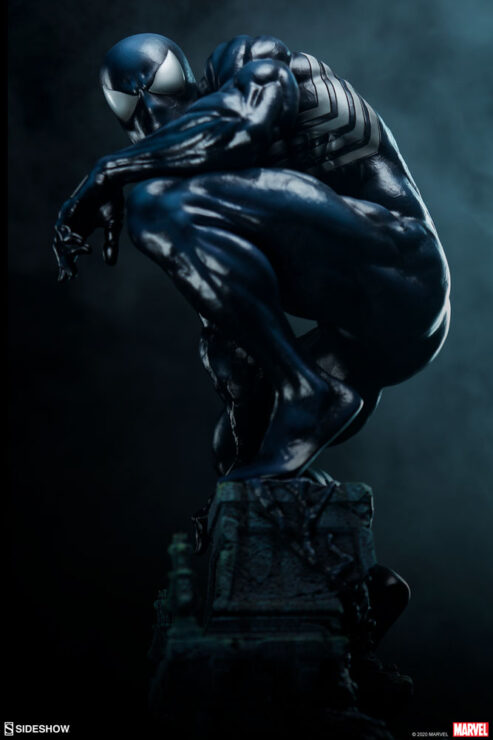 The Symbiote Spider-Man Premium Format™ Figure measures 24” tall as everyone’s favorite wall crawler crouches atop a crumbling church bell tower. Tendrils of the Klyntar symbiote substance wrap their way up the detailed tower base, eager to reunite with their host.

This story begins far before any story of Spider-Man. It reaches beyond the city of New York. Perhaps that’s an understatement. This story reaches back before the creation of the universe itself, when all that existed was simply the dark and all-encompassing void. There was nothing and no one, save for Knull.

Knull, God of the Abyss, whose kingdom was space itself. And as he was the only one in existence, there was no one to oppose his power. And then, from within the nothingness, there were The Celestials, the creators of the Universe. They were intent on creation. Perhaps they believed that the universe was empty, but Knull disagreed.

“My Kingdom was not empty. My abyss was not dead. Not hollow. The endlessness of my lands was not theirs to raze and reform and remake! No. The void breathes. The abyss has teeth. And shadows only grow in the light.”

Knull creates a blade made from his own shadow. His strength, combined with the strength of the blade, are powerful enough to lob off the head of a Celestial. His power is staggering, but not enough to defeat the rest of the Celestials all on his own. And so, they banished Knull to the void.

The void was supposed to be an eternal punishment. It was supposed to be a lasting consequence for his aggression. But be it shadows, or the void, or the abyss, or dark nothingness, it is all still Knull’s domain. Thus, within the depths of the void, Knull turned the Celestial’s severed head into his own personal forge. It was there that he attempted to create life for the very first time.

He forged a blade from the darkness. It was a living blade, created with a Celestial hammer. It was, in a sense, tortured to life. Each hit of the hammer brought it closer to its sentience. It was becoming more powerful, and more resilient, but as its consciousness began to form, it could only remember the heat of the forge and the ring of the blade. This fear would spread to even the offspring of the original symbiote. They would be weak to fire and the high-pitched ringing that reminded their very genetics of the pain of creation.

Knull used his sword for one thing and one thing alone: to kill gods. They had taken away his darkness and filled it with light, and he was intent on destroying them for it. His sword was called All-Black, the Necrosword, The Godslayer, and more. With his sword of darkness, Knull fought against all manner of gods and divine entities. He was a threat to all of the greatest powers of the Universe. Not only due to his ability to create life from the abyss, but also because he was fueled by the Celestial Forge. He toppled entire godheads, one after the other, until finally, in a fight against a god in purple and gold, he toppled down to the surface of a nameless planet. His sword landed just in front of a young man named Gorr.

Gorr took his sword, All-Black. The sentient sword found a thread of similarity in their rage: They both hated the so-called “gods.” And so, as the wielder of All-Black the Godslayer, Gorr became The God Butcher, one of Thor’s most formidable foes. All of his original power simply came from wielding one of Knull’s prototype creations. And though Knull did not have his sword anymore, he had grown in power and creativity.

Knull made a discovery. He didn’t necessarily need a weapon. The darkness of the living abyss could bond with a host body, and Knull could control the creature, seeing through its eyes and acting on his behalf. They were the first symbiotes. He created a Hive Mind, and sent out his mind-controlled symbiotes to every corner of the galaxy, controlling them from his throne.

But once again, his kingdom would not last forever. When Thor defeated one of his dragon symbiotes, it severed Knull’s connection to the entire Hive Mind. Suddenly, they had minds of their own, and hosts of all sorts, not just primal beasts. When the symbiotes encountered hosts with true moral good in their hearts, it spread to the rest of the Hive Mind. They were ashamed of their violent past, and hoped to forge a new positive future.

With that, the symbiotes surrounded Knull. They spawned again and again, making darkness from the darkness within themselves. They encircled him. They trapped him. They encased him in a planet of their endlessly spawning species, if only to keep him at bay and save the universe from his sinister actions. Using all their combined strength to trap Knull, they formed a cage or, as it is called in their language, a Klyntar.

Venom is perhaps the most famous Klyntar of all. However, over the course of its existence, it has had its memories erased so many times that it could not be entirely certain of its past. It is possible it was unaware that it was a Klyntar at all. Venom was always an outcast. And when the symbiote unintentionally bonded with a homicidal alien, it twisted their mind. They became a being of rage and bloodlust, just like the host.

When it was freed from its previous host, it ended up in The Beyonder’s collection on Battleworld. Deadpool found it first, and bonded with it briefly, before realizing that the symbiote was sentient and trying to interface with his mind. But Deadpool knew that his own mind was already insane, and didn’t want to drive the symbiote insane either, so he quickly discarded the symbiote.

Finally, Spider-Man arrived and bonded with the symbiote who would be known as Venom. It was only the beginning of their battles together. Finally, the Symbiote Spider-Man suit was created. Throughout all this, they were blissfully unaware of Knull, but he would return. He would be back for Venom, and to claim all of his symbiotes once again.

Who is your favorite Symbiote? Let us know in the comments, and don’t forget to Let Your Geek Sideshow! 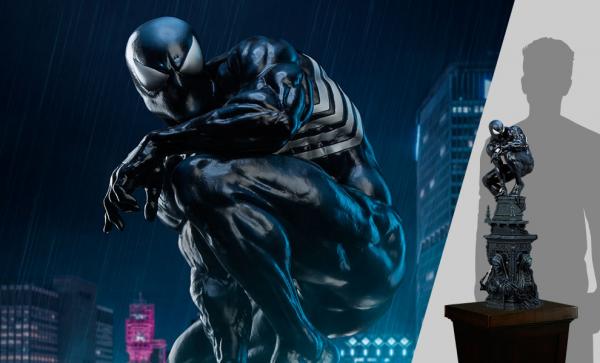