When we last left Miles in Spider-Man: Into the Spider-Verse, he was embracing his superhero identity as Spider-Man and dealing with the aftermath of both Peter Parker’s death and Wilson Fisk AKA Kingpin’s defeat. Years later, the Spider-Man: Across the Spider-Verse trailer begins with Miles Morales in his bedroom at home. He’s listening to music, surrounded by his sketchbook and other personal items, unaware for a time of his friend trying to contact him across another dimensions.

We soon learn Miles is grounded, but that doesn’t stop him from joining Gwen Stacy for another adventure. He accepts her invitation through a familiar-styled portal — a floating, glowing, geometric tube that transports our heroes to other universes. But when Miles arrives in another dimension, Gwen is nowhere to be found. This blue, green, and yellow Spider-Verse is also definitely not Gwen’s universe.

Miles swings, smacks, and slips through a fast-paced place full of high-speed trains and layered pastels. The second he starts to get the hang of things, he’s swept away by a newcomer: a blue-and-red-clad Spider-Man that seems to be chasing our teenage hero.

Back in her own universe, Spider-Gwen discovers a way to contact Miles Morales across dimensions. She makes use of that newfound ability in Spider-Man: Across the Spider-Verse, appearing through a portal to ask Spider-Man to don the suit and get out of the house.

If you recall from the first Spider-Verse film, Gwen Stacy is a drummer and also the Spider-Woman who was best friends with her own Peter Parker before he perished. She was brought to Miles’ dimension during the Super-Collider explosion. After helping save his world, she returned to her own, taking her emotional ties to the other Spider-heroes with her. Based on her role in the new trailer, she’ll probably be a main player in Across the Spider-Verse.

Miles Morales has only spent a couple minutes in an alternate universe when Spider-Man 2099 shows up. This futuristic Spider-Man makes a beeline for an unsuspecting Miles.

Miguel grabs onto Miles and won’t let go. Then, he tunes his watch to his desired number — indicating perhaps the number of the next universe to which he’s jumping — and sends both himself and Miles through a portal.

On a spacious, neon freeway universe, Miguel continues to attack Miles by throwing him down this cylindrical tunnel. The trailer ends with Miguel trying to take Miles to another dimension — but for what purpose remains to be seen.

From the Spider-Man: Into the Spider-Verse post-credits scene, we already know Spider-Man 2099 comes from Nueva York, and he’s wearing a watch that helps him jump through different multiverses. At the end of the movie, he even puts the tech to use, resulting in a hilarious and meta scene straight from Marvel television history. 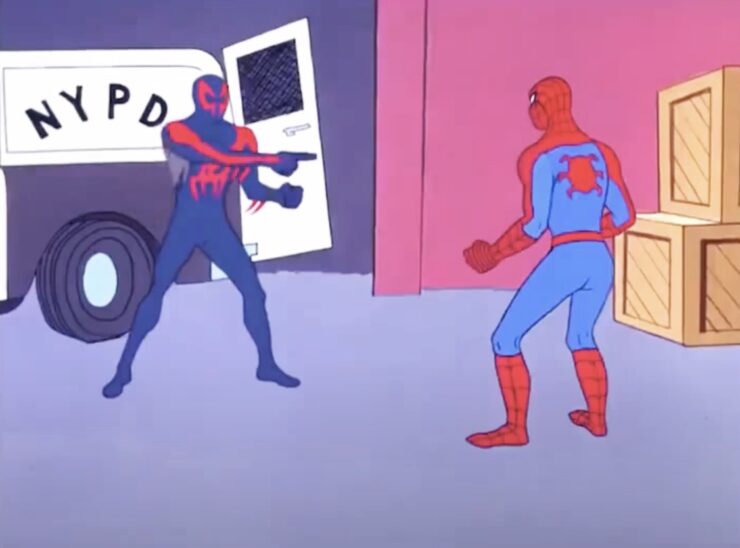 In the Marvel comics, Miguel O’Hara is a brilliant geneticist who accidentally merges half of his own human DNA with a spider’s genetic code. He has spider talons on his hands and feet, spinnerets in his forearms, as well as other spider abilities such as strength, speed, agility, vitality, and advanced hearing, vision, and reflexes — although he does not possess any “spider sense.” Finally, Miguel also has venom glands and fangs. It will be interesting to see how and why Miguel uses these abilities against Miles Morales in the upcoming Spider-Man: Across the Spider-Verse film. 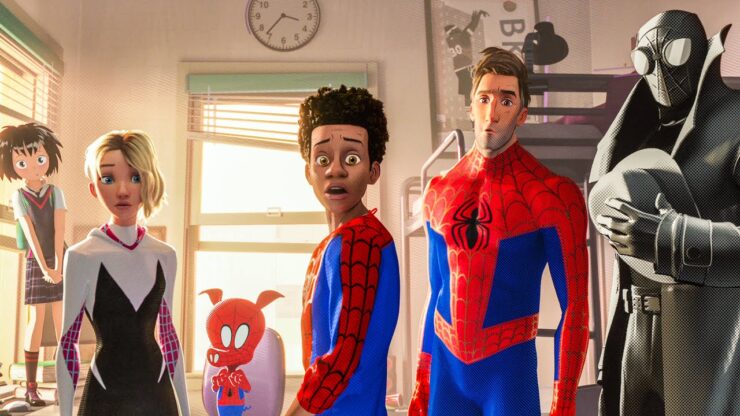 Although absent from this new trailer, it’s important to mention Spider-Ham / Peter Porker, Spider-Man Noir, Peter B. Parker, and Peni Parker & SP//dr. They gave us our first glimpses into the Spider-Verse as a whole. While we may not be revisiting their universes, their stories and styles are vital to our understanding of the Spider-Man multiverse.

Peter B. Parker is a disheveled and jaded Spider-Man who reluctantly mentors Miles. Peter B. Parker’s universe is almost identical to Miles’, including in art style, but Peter himself is far different than the Peter Parker of Miles’ universe, who was more successful. At the end of Into the Spider-Verse, however, Peter B. Parker is ready to make amends and get his life back on track. Maybe we’ll see a happier Peter B. in the new film.

Spider-Man Noir is a 1930s detective who lives in a monochromatic Spider-Verse. Spider-Ham lives in a world of anthropomorphic characters and heroes. Peni Parker, along with her telepathically linked biomechanical companion SP//dr, hail from an anime-inspired universe. All of these heroes returned to their own worlds once Miles’ home was saved, so we can’t know if they will appear at all in Spider-Man: Across the Spider-Verse (Part One). Still, it might be fun to leap through their spaces for a quick cameo/hello. Whatever happens, we’ll find out in October 2022!

Whose Spider-Verse are you most excited to visit in Spider-Man: Across The Spider-Verse (Part One)? Let us know in the comments, and don’t forget to Let Your Geek Sideshow!