Ahsoka Tano™ was first introduced in Star Wars: The Clone Wars™. The intrepid — and sometimes impetuous — Padawan™ won the hearts of fans everywhere. Since then, Ahsoka Tano has appeared in the animated series Star Wars: Rebels™. She also made her live-action debut in Star Wars: The Mandalorian™ season 2.

If you love Ahsoka Tano as much as we do, you’re probably looking for ways to celebrate this character as well as your favorite fandom. You need look no further than this blog! Below, we’re highlighting art prints that chronicle Ahsoka Tano’s journey throughout Star Wars™. And of course, all of this Star Wars wall art, from lithographs to canvas prints and more, can be found on Sideshow’s art prints website. 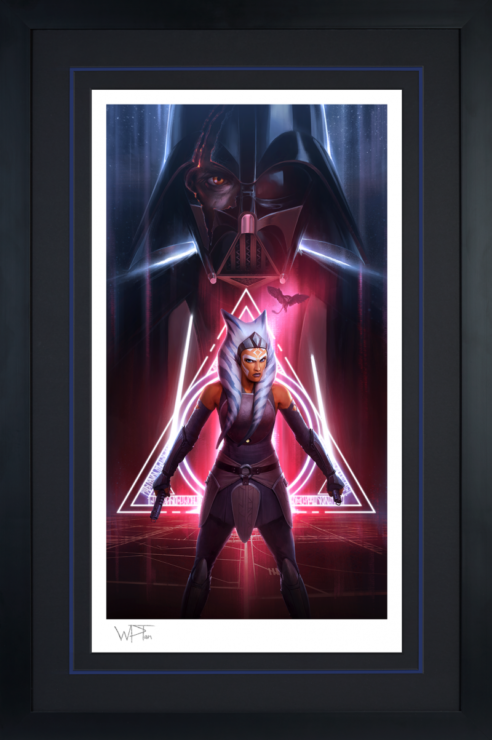 Ahsoka Tano and Darth Vader™ finally meet in Star Wars: Rebels. Horrified by the monster her former Master Anakin Skywalker™ has become, Ahsoka Tano pledges to stay and fight him — even at the potential cost of her life. That choice, and the consequences of this fateful duel, are shown in vibrant, contrasting colors in the Ahsoka Tano: Between Two Worlds Fine Art Print by Darren Tan. Capture the overwhelming emotion of this scene forever when you add it to your Star Wars gallery.

A Jedi Plagues Me 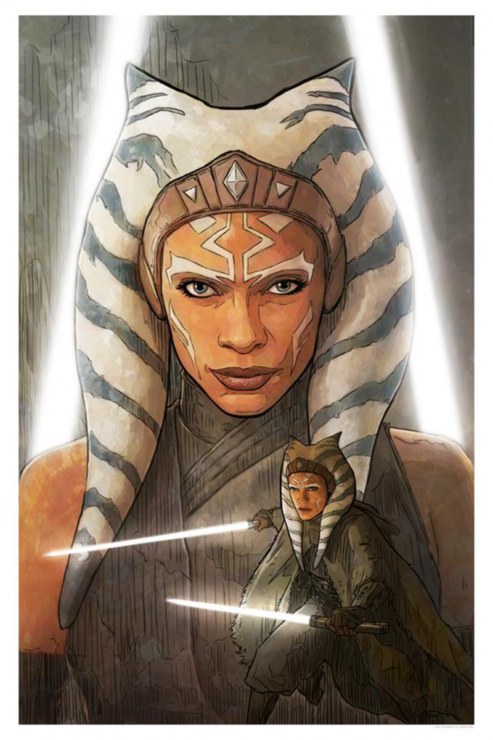 Ahsoka Tano’s white lightsabers are iconic. Thus they take a central focus in Brent Woodside’s A Jedi Plagues Me. This Star Wars: The Mandalorian lithograph is presented by ACME Archives. Her signature ‘Snips’ attitude, plus her steady fighting stance, additionally amplify the feeling that Ahsoka Tano has leapt offscreen and into your home gallery. 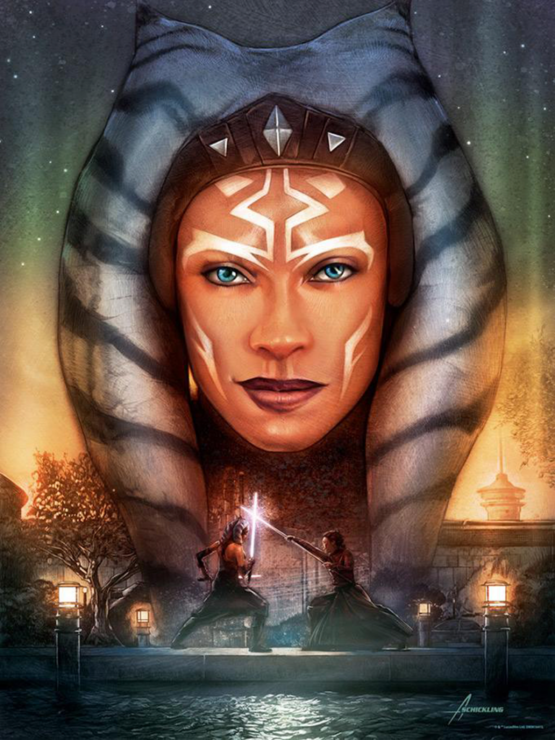 Ahsoka Tano’s appearance in The Mandalorian was met with uproarious enthusiasm. Her much anticipated return to the Star Wars universe is celebrated here in ACME Archives’ and Adam Schickling’s The Lost Jedi’s Return Lithograph. Warm lighting and soft shadows bring Ahsoka Tano’s duel to life in incredible detail. Evoke the intense and exciting moment we all witnessed onscreen with this print. 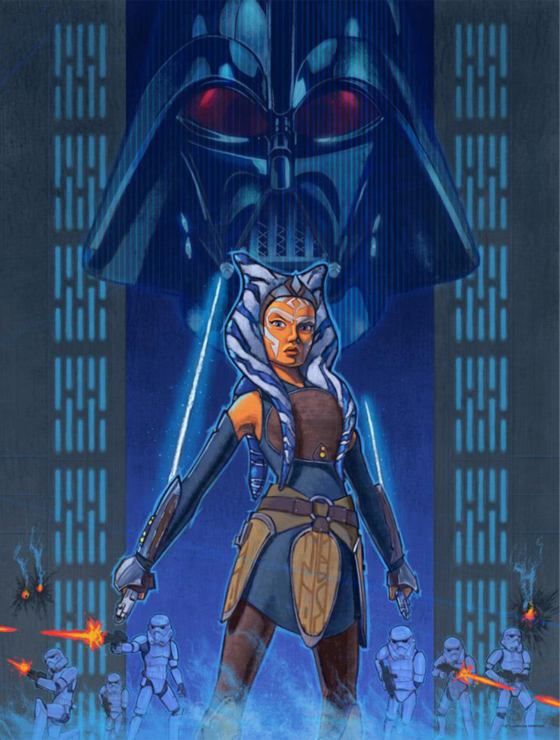 Paying homage to the Star Wars animated shows, the Rebel Resolve Lithograph by ACME Archives and Colin Murdoch pits Ahsoka Tano against myriad enemies. A stormtrooper™ battalion and a certain Sith Lord™ approach in the background. Outnumbered as she is, Ahsoka Tano still stands tall as she prepares for her next battle. In service of a rebellious cause, this powerful Force wielder is unstoppable.

Communion In The Force 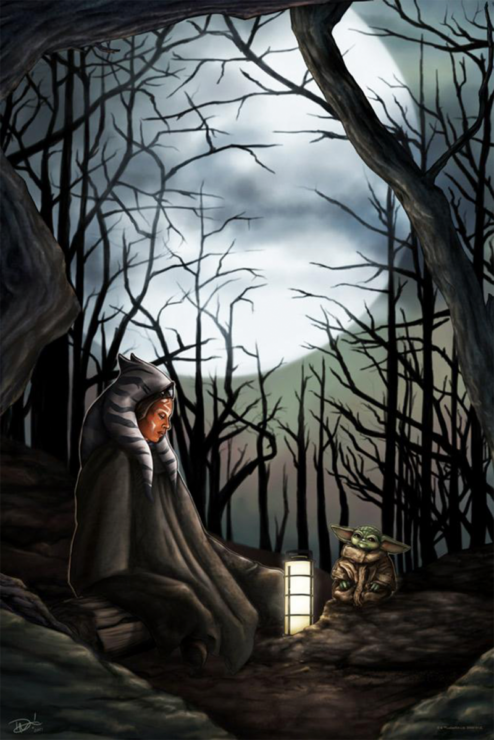 Relive the beautiful moment when Grogu™ is reunited with his own kind after you collect the Communion In The Force Lithograph by ACME Archives and Dianne (Diha) Vaznelis. Inspired by one of the most moving scenes from The Mandalorian, this Star Wars artwork will bring serenity to any room in which it’s placed. 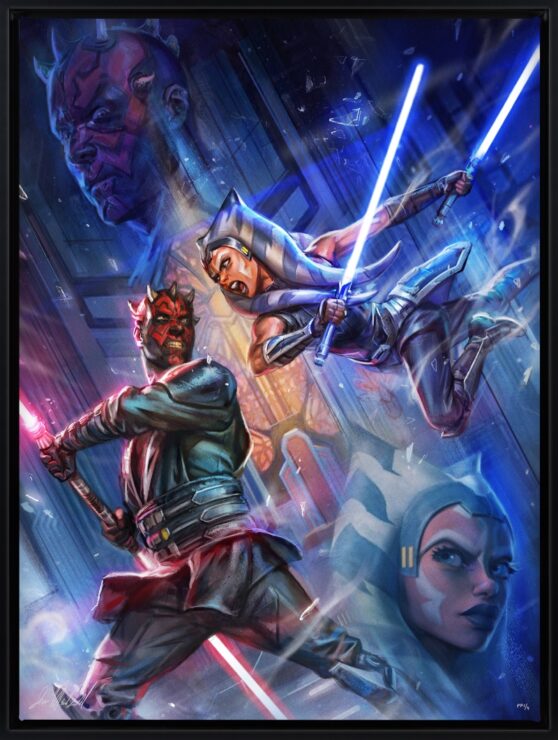 The Clone Wars season 7 will go down in history as some of the best Star Wars television content. This duel between Ahsoka Tano and Darth Maul™ is specifically regarded as a highlight. So if you loved the “Phantom Apprentice™” showdown, place it permanently in your mind and your walls with the One Last Lesson: Ahsoka Tano vs Darth Maul Fine Art Print by Ian MacDonald. 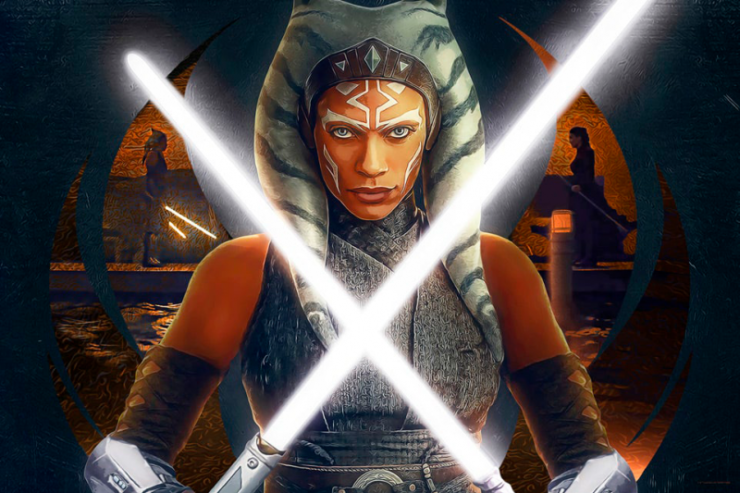 For those who just can’t get enough, there’s always more Mandalorian artwork for your collection! Grace your gallery with the Ahsoka Returns Lithograph by ACME Archives and Al Abbazia. Here Ahsoka Tano’s identities as warrior and rebel combine. This print is for Star Wars fans who love celebrating the legacies of incredible characters.

Which of these Ahsoka Tano art prints is your favorite? Will you be adding any to your Star Wars collection? Let us know in the comments, and don’t forget to Let Your Geek Sideshow!