The Evolution of Spider-Man’s Sinister Six!

All great superheroes are measured by their villains, and Spider-Man boasts one of the most impressive and memorable rogues galleries in all of comics history. Seeing Spidey face one of his classic foes is fun enough, but when six of them get together to take on the Wall-Crawler… 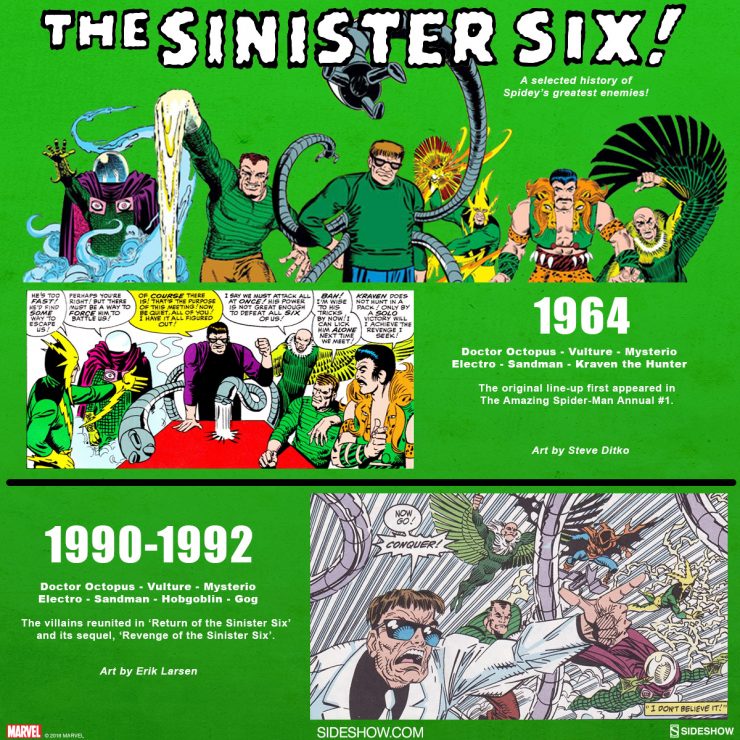 The Sinister Six is an ever-changing team with a usually consistent goal: beat the living hell out Spider-Man. Created by the late Stan Lee and Steve Ditko, the original team was led by Doctor Octopus and also included the Vulture, Mysterio, Electro, the Sandman, and Kraven the Hunter.

In 1964 Lee and Ditko, riding on the smash success of The Amazing Spider-Man, unleashed a massive 72-page Annual issue featuring the debut of the team. Fittingly titled “The Sinister Six!”, the epic story (illustrated and likely plotted by Ditko, with dialogue by Lee) had Spider-Man taking on the villainous gang one-at-a-time as he fights to rescue his kidnapped loved ones; each battle scene featured a lavish splash page of Spidey battling his enemies in a variety of exotic locations and death-traps.

Although The Amazing Spider-Man Annual #1 was a hit, it would be many long years before the Sinister Six would reappear. Similar villainous teams came and went in other Marvel comics (such as the Frightful Four and Electro’s Emissaries of Evil), but it wasn’t until 1990 that writer David Michelenie and artist Erik Larsen would bring back the criminal sextet in ‘Return of the Sinister Six’. 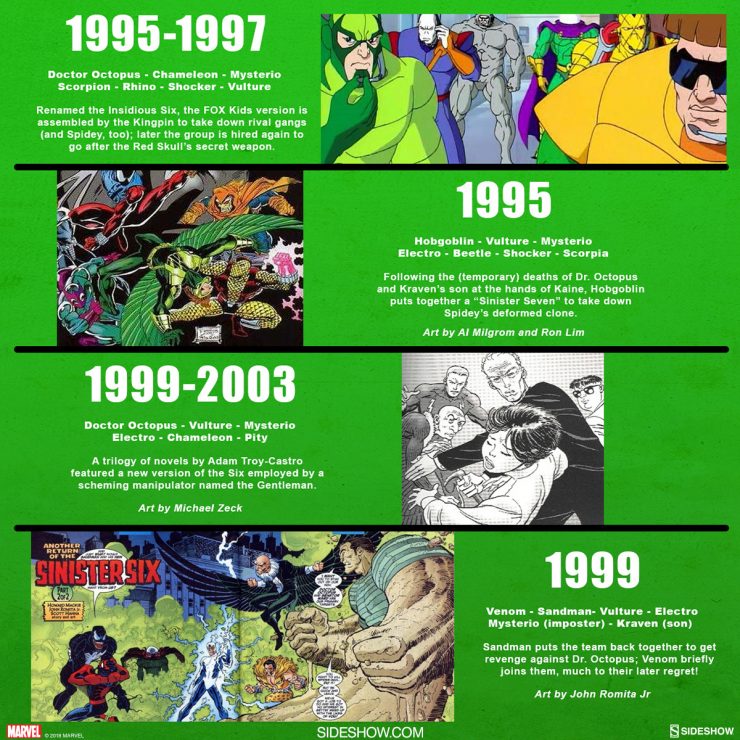 No longer a simple revenge hit squad, the Six now sought to blackmail the entire planet with a poison gas device, even though the treacherous Doctor Octopus had other plans. The villains would take on the world once again in 1992’s ‘Revenge of the Sinister Six’ (illustrated again by Larsen, who also assumed writing duties), in which the Six annex killer HYDRA satellites with the aid of stolen interdimensional robots and their new recruit, the giant alien monster Gog.

The Six would return throughout the years with other nasty schemes: revenging themselves upon Octopus for his past betrayal (in a 1999 two-part story written by Howard Mackie and drawn/co-plotted by John Byrne and John Romita Jr.), threatening the Earth once more with annihilation (in the 2012 ‘Ends of the Earth’ story arc written by Dan Slott and primarily illustrated by Stefano Caselli and Humberto Ramos), and even being kidnapped and forced to serve as superheroes during Octopus’ stint as the Superior Spider-Man (2014, in a story written by Chris Yost and drawn by Marco Checchetto). 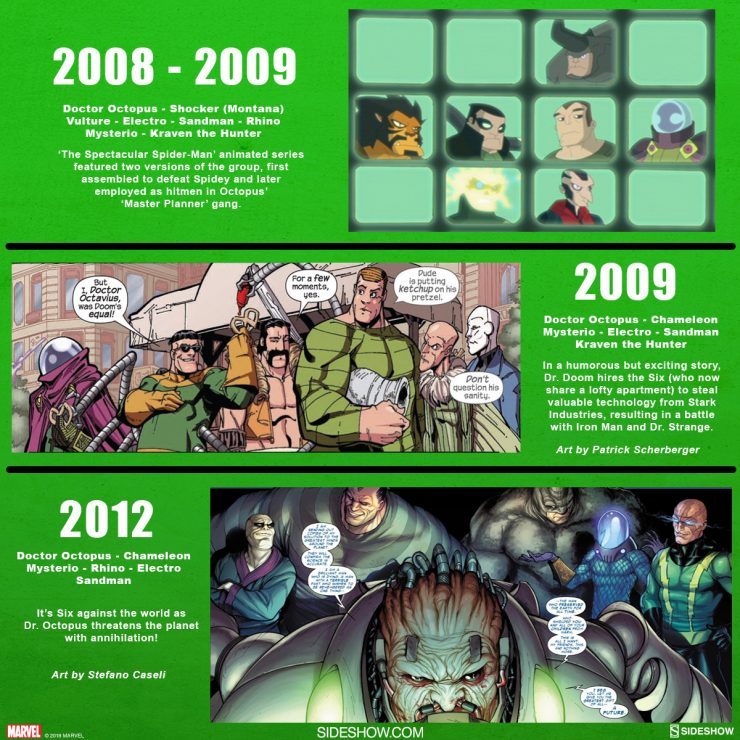 Nearly every major Spider-Man villain has appeared in some variation of the team, whether it be in the main comic continuity or in animation, games, toy sets, and even the ill-fated Broadway musical. Members have included Venom, the Lizard, the Rhino, the Scorpion, the Chameleon, the Beetle, Shocker, Black Cat, Carnage, Hydro-Man, Living Brain, and on and on; even Spider-Man himself was coerced into becoming a recruit in the Ultimate Marvel comics brand. 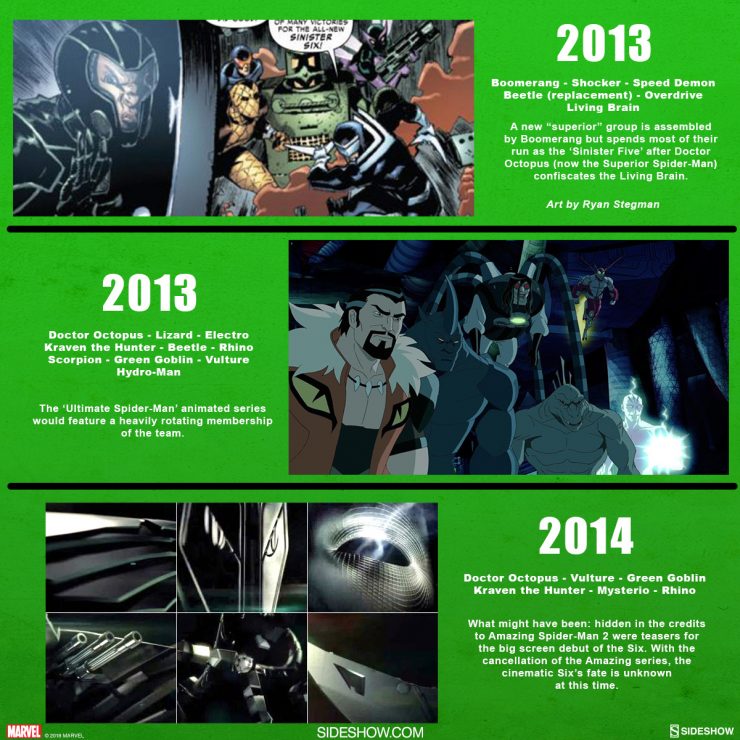 Although Marvel Studios continues to dominate the superhero film market, the Six have still had tough luck in making their big-screen debut; plans and rumors of their inclusion in both the Sam Raimi films and the abandoned ‘Amazing Spider-Man’ movies ultimately lead to naught. Sony’s planned Sinister Six film, with director Drew Goddard attached to the project, would also fall through as the project continues to leap in and out of development hell.

However, with Sony’s Venom film and an announced series of Spidey-themed cinematic spin-offs, not to mention Marvel Studios’ own recent success with Spider-Man: Homecoming and Insomniac’s Spider-Man PS4 game, there may be hope that the villains will have their day yet.

Whether it be in comics or movies, here’s hoping Marvel will live up to their promise to “Bring on the Bad Guys!”

You can see Spider-Man in action against Doctor Octopus in the new Spider-Man Premium Format™ Figure.  Be sure to RSVP for more information about when the ol’ webhead goes up for pre-order!

Looking to assemble the Spider-Verse in your collection?  Check out Sideshow’s full offering of Spider-Man collectibles.