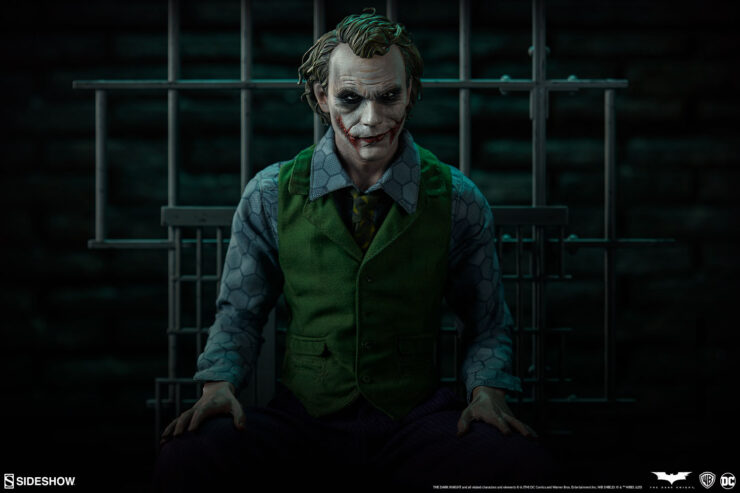 There have been many different interpretations of The Joker through the years, each of them wonderful in their own way.

In Batman: The Animated Series, we saw a sinister, conniving character who found his horrific work to be hysterical. Todd Phillips’ Joker simply presented a manipulated man’s unstable descent into madness. And then there’s Christopher Nolan’s The Dark Knight, where Heath Ledger’s version of The Joker is completely in control of every situation as he drags the city of Gotham into the depths of true chaos, purely for chaos’ sake.

Let’s look at some of the lines that cemented this incredible on-screen iteration as a fan-favorite version of The Joker, going from great to greatest.

When The Joker arrives at a rather well-to-do party, he has one plan in mind: find Harvey Dent. Or, if necessary, he’ll settle for Harvey Dent’s loved ones. His league of clown-themed thugs brandish their weapons with delight, and The Joker grabs a few hors d’oeuvres while threatening folks in the room.

He just needs to talk to Harvey! Or so he says. But when Rachel speaks up against him, The Joker sees it as an opportunity. Batman swoops in and The Joker holds her carefully out of window to threaten him. Unfortunately, Batman isn’t very good with words.

The Joker: You know. I don’t want there to be any hard feelings between us, Harvey. When you and, uh…

The Joker: Rachel were being abducted. I was sitting in Gordon’s cage. Now, I didn’t rig those charges.

Harvey Dent: Your men. Your plan.

The Joker: Do I really look like a guy with a plan? You know what I am? I’m a dog chasing cars. I wouldn’t know what to do with one if I caught it! You know, I just… do things.

The Joker is not a man with a plan. The cops have plans. Gordon has plans. Batman has a plan for nearly everything! And yet The Joker is able to outsmart them because no one can predict him.

Everyone’s trying to control a world, but the world can’t be controlled, especially not with The Joker in it. He’s simply just trying to show everyone how pathetic their attempts to control their little worlds are.

Locked away in Gordon’s interrogation room, and under the watchful eye of a “twenty year man,” The Joker has a solitary simple request: A single phone call. It seems innocent enough, and it is known to be a part of any typical arrest.

And yet, what The Joker doesn’t reveal is that he’s used his twisted understanding of explosives and mental manipulation to place a phone rigged to explode inside one of his thugs. The phone rings, the light flashes, and in an instant, glass shatters and the whole level goes up in flames.

“I know your friends better than you ever did. Would you like to know which of them were cowards?”

The Joker: Do you want to know why I use a knife? Guns are too quick. You can’t savor all the… little emotions. In… you see, in their last moments, people show you who they really are. So in a way, I know your friends better than you ever did. Would you like to know which of them were cowards?

Locked away in the interrogation room with the officer who was a “twenty year man” had more than just one memorable line. These liens actually reveal a unique parallel between The Joker and Batman: they both refuse to use a gun because it’s too cruel. Batman believes that killing anyone is cruel. The Joker believes that it would be cruel to rob himself of a perfectly delightful painfully slow torturing murder.

“This city deserves a better class of criminal. And I’m gonna give it to them.”

The Joker: All you care about is money. This city deserves a better class of criminal. And I’m gonna give it to them!

If you took one look at The Joker you wouldn’t assume that he’s an economist. Though we do first meet him in a bank, he’s actually not as focused on money as one might expect.

In fact, despite having a mountain of money to do whatever he pleases, he takes the cigar from a crime boss’ mouth, and sets all of his money aflame. It’s never been about the money. It’s about the message.

The Joker: Don’t talk like one of them. You’re not! Even if you’d like to be. To them, you’re just a freak, like me! They need you right now, but when they don’t, they’ll cast you out, like a leper! You see, their morals, their code, it’s a bad joke. Dropped at the first sign of trouble. They’re only as good as the world allows them to be. I’ll show you. When the chips are down, these… these civilized people, they’ll eat each other. See, I’m not a monster. I’m just ahead of the curve.

In a world that pretends to be orderly, The Joker is chaos. In a world fueled by corruption, The Joker only aims to expose it. In a world of darkness, The Joker wants to light up the world with explosions.

He sees himself as the natural progression of the world. The dark underbelly of every person turned face up for everyone else to see.

The Joker: Come here. Hey! Look at me. So I had a wife. She was beautiful, like you. Who tells me I worry too much. Who tells me I ought to smile more. Who gambles and gets in deep with the sharks. One day, they carve her face. And we have no money for surgeries. She can’t take it. I just want to see her smile again. I just want her to know that I don’t care about the scars. So… I stick a razor in my mouth and do this…

The Joker has wide scars spreading across his cheeks. He takes his red lipstick to them, lighting them up like a clown’s smile. And while he’s not always giggling, The Joker has always got a wide smile on his face.

This is one of two stories as to how he got his scars. Is this one true? Or is it the next?

The Joker: You wanna know how I got these scars? My father, was a drinker, and a fiend. And one night, he goes off crazier than usual. Mommy gets the kitchen knife to defend herself. He doesn’t like that. Not. One. Bit. So, me watching, he takes the knife to her, laughing while he does it. He turns to me and says, “Why so serious?” Comes at me with the knife. “WHY SO SERIOUS?” He sticks the blade in my mouth… “Let’s put a smile on that face.” And…

He’s a mystery that even Batman can’t solve. He’s a story that can’t be told with flashbacks, not truly at least. And yet, The Joker loves to spin his own stories explaining his scars. If he has a history, he prefers multiple choice.

“Madness is like gravity… all it takes is a little push.”

The Joker, roped around the ankles, ends up hanging upside down from one of Batman’s many grappling hook devices. Swinging, smiling, and laughing, he teases Batman, telling him once again how they are quite similar.

This is the last line The Joker says in the film, and creates the perfect ending for the character.

The three simple words don’t seem so terrifying when they’re written down, but Heather Ledger brings out something in the lines that give you goosebumps and nightmares.

The Joker starts telling his story soft, and rises to a growl, all before ending with this line as if it holds no weight at all. Why so serious?

Batman: Then why do you want to kill me?

The Joker: I don’t, I don’t want to kill you! What would I do without you? Go back to ripping off mob dealers? No, no, no! No. You… you… complete me.

The Joker and Batman go hand in hand: there cannot be one without the other. They are freaks together. One of them spends time finding custom fabrics and themed calling cards for his infamous tirades through the city of Gotham, and the other one is The Joker!

Their similarities go far beyond their dedication to their theme. And it’s those similarities that The Joker loves the most. The two madmen are intertwined.

Out of all of The Joker‘s quotes from The Dark Knight, which is your favorite? Let us know in the comments, and don’t forget to Let Your Geek Sideshow!

The Toothless Statue- How To Train Your Dragon: The Hidden World